Two African forest elephants have been successfully fitted with satellite collars to help monitor their movements. It is hoped that the initiative will reduce the risk of crop-raiding, prevent conflict with communities and, ultimately, benefit both people and pachyderms.

Affectionately known as Big John and Little John, the brothers have been making a name for themselves well beyond the borders of their native Guinea since they went walkabout in West Africa. But the meanderings of these modern-day mammoths have taken them beyond the relative safety of the deep forest and brought them into close contact with people as far afield as neighbouring Liberia and Côte d’Ivoire.

These encounters, while fascinating for those unfamiliar with elephants, are also fraught with danger. And they’re no fun for the hapless farmers whose annual harvest could be hoovered up in minutes if the hungry travellers selected their smallholding as a refuelling stop. Hence the urgent need for remedial measures.

In a classic example of transboundary collaboration, Fauna & Flora International (FFI) worked with rangers on both sides of the Guinea/Liberia border to execute this ambitious plan, the first time that elephants in the region have been collared. 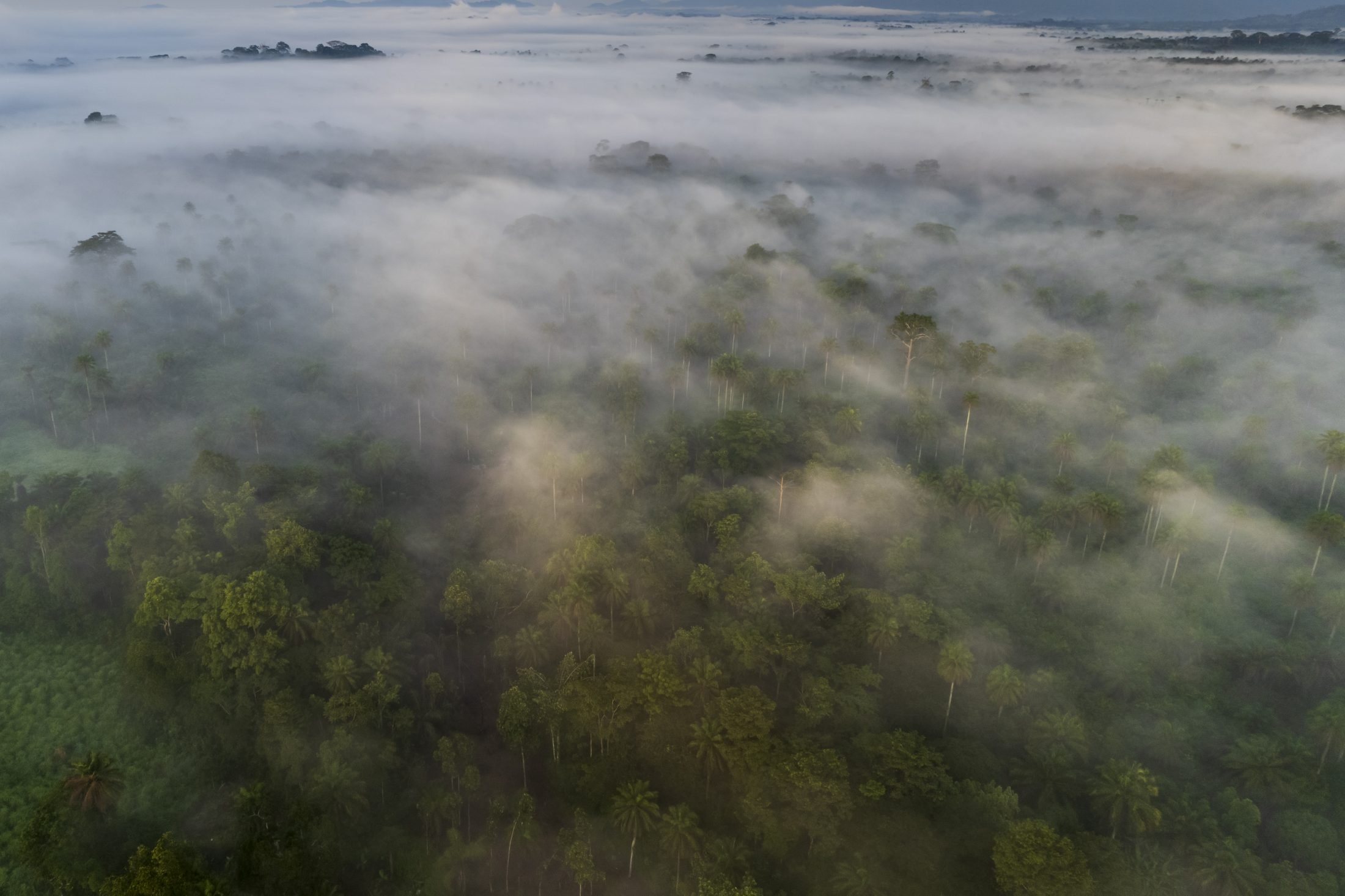 Aerial view of sunrise over the Upper Guinea Forest, one of the last elephant strongholds in West Africa. Studies estimate that fewer than 40,000 forest elephants survive in the wild, with only small, isolated populations remaining in West Africa. 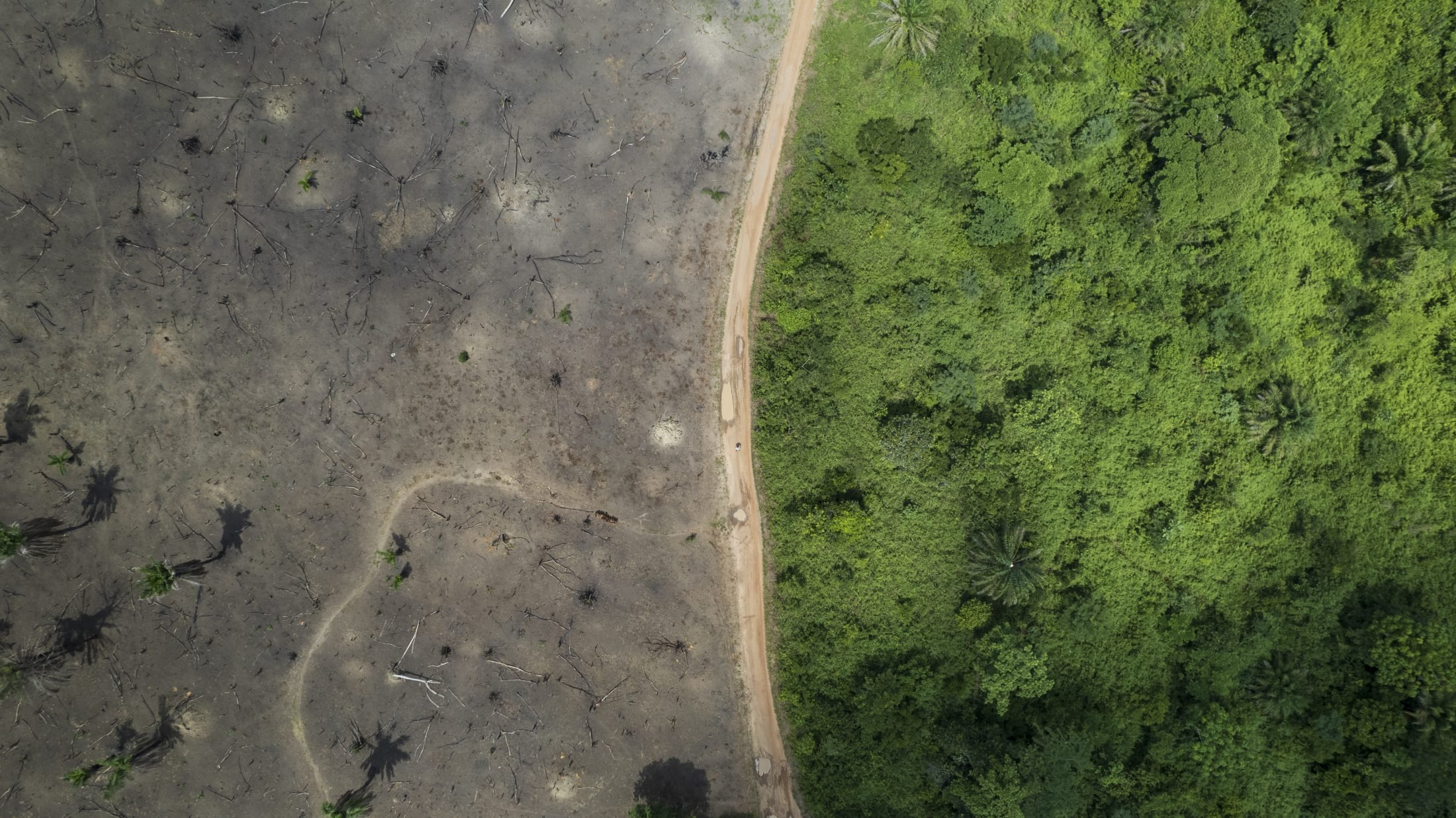 Aerial view showing the impact of deforestation on the landscape near Ziama Massif Forest in Guinea. Habitat loss is arguably the number one threat to the survival of the African forest elephant, which was recently recognised as a separate species and reclassified as Critically Endangered on the IUCN Red List. 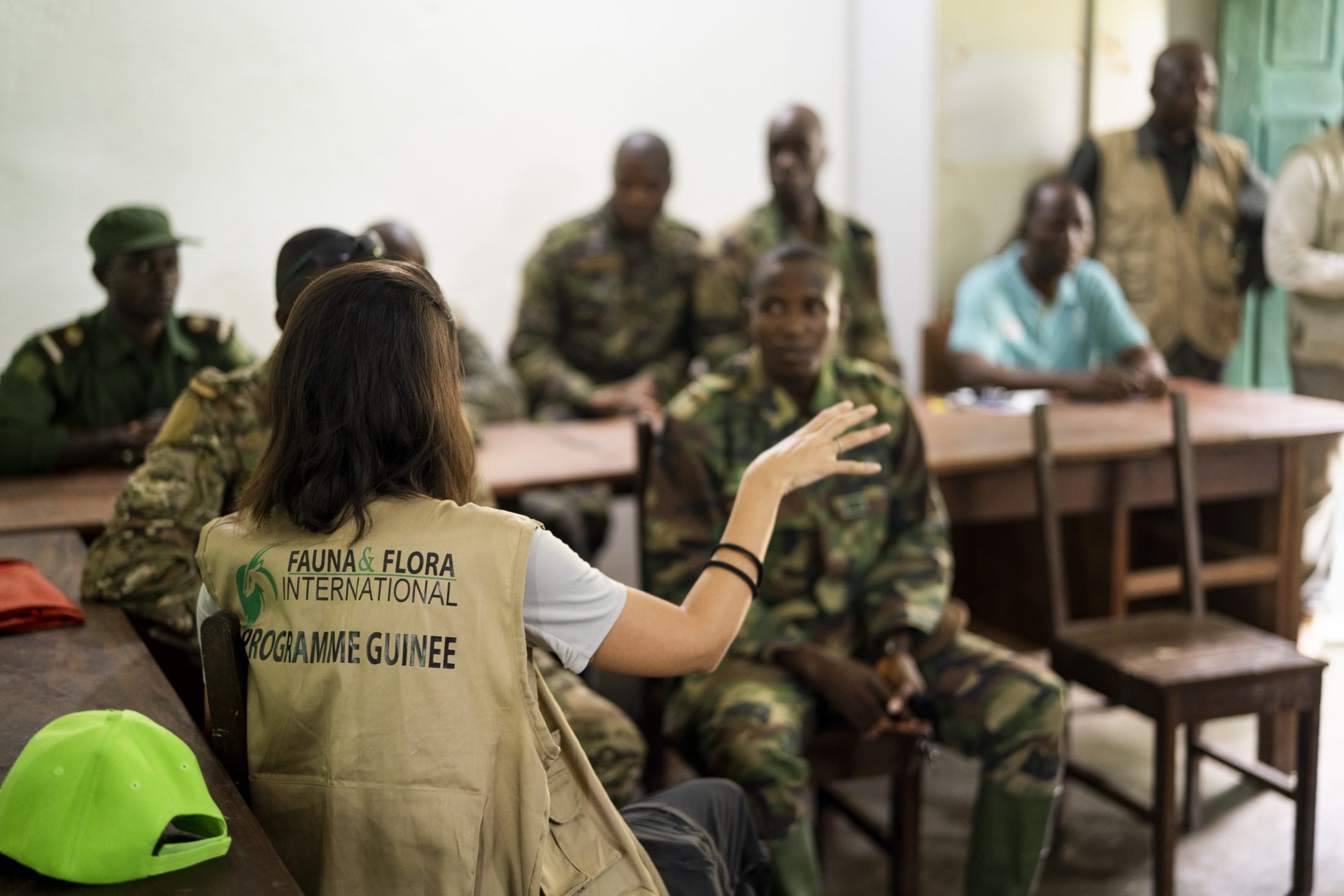 Koighae Toupou, FFI’s Site Manager in Ziama and the man nicknamed ‘Toupou Elephant’ by local communities, strides out ahead of rangers from Guinea’s Centre Forestier de N’Zérékoré as they head out into the field in search of their first target. 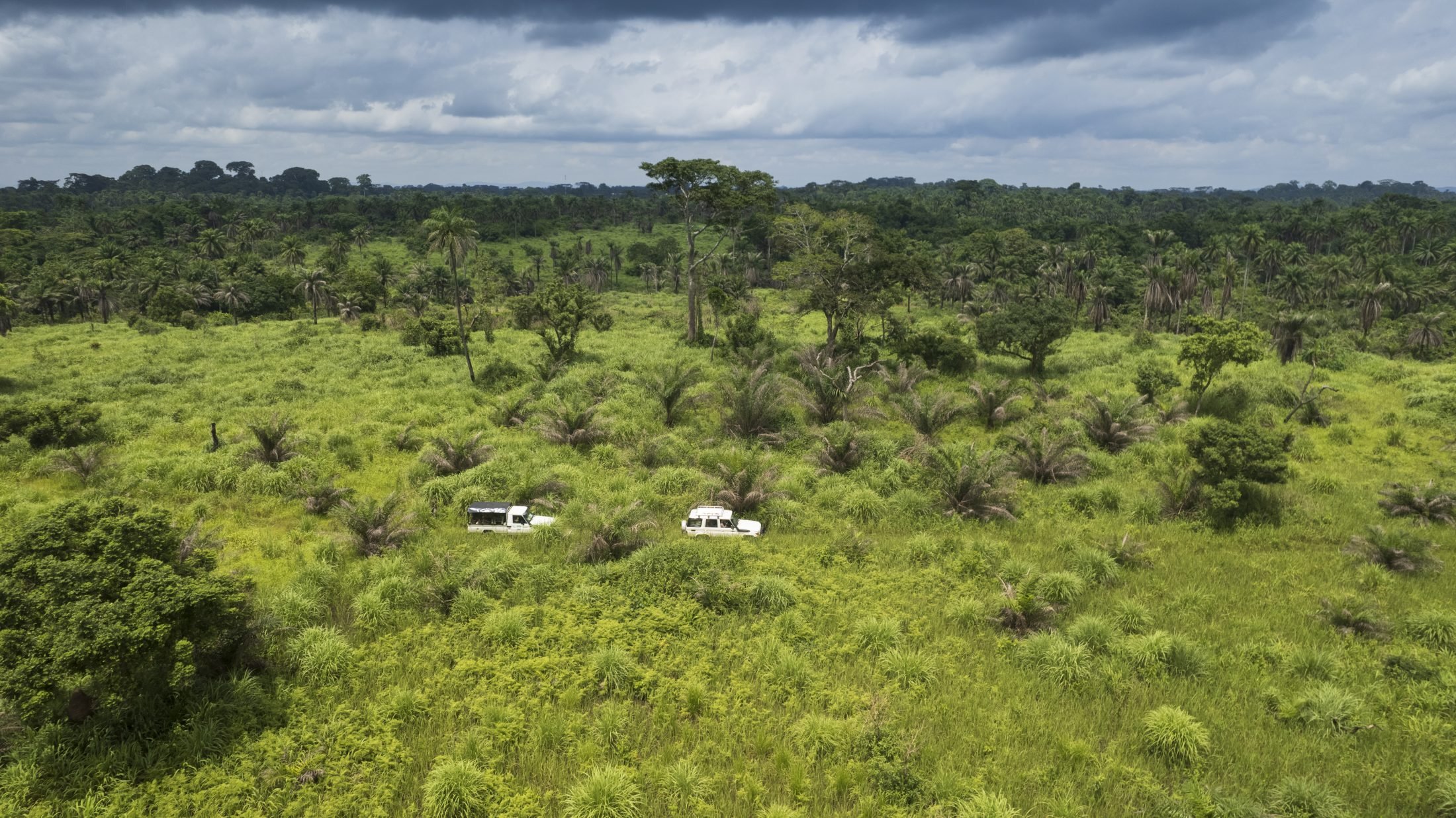 Telltale signs of recent elephant presence in the Ziama Massif ecosystem. Despite their vast bulk, forest elephants can be surprisingly elusive and inconspicuous. 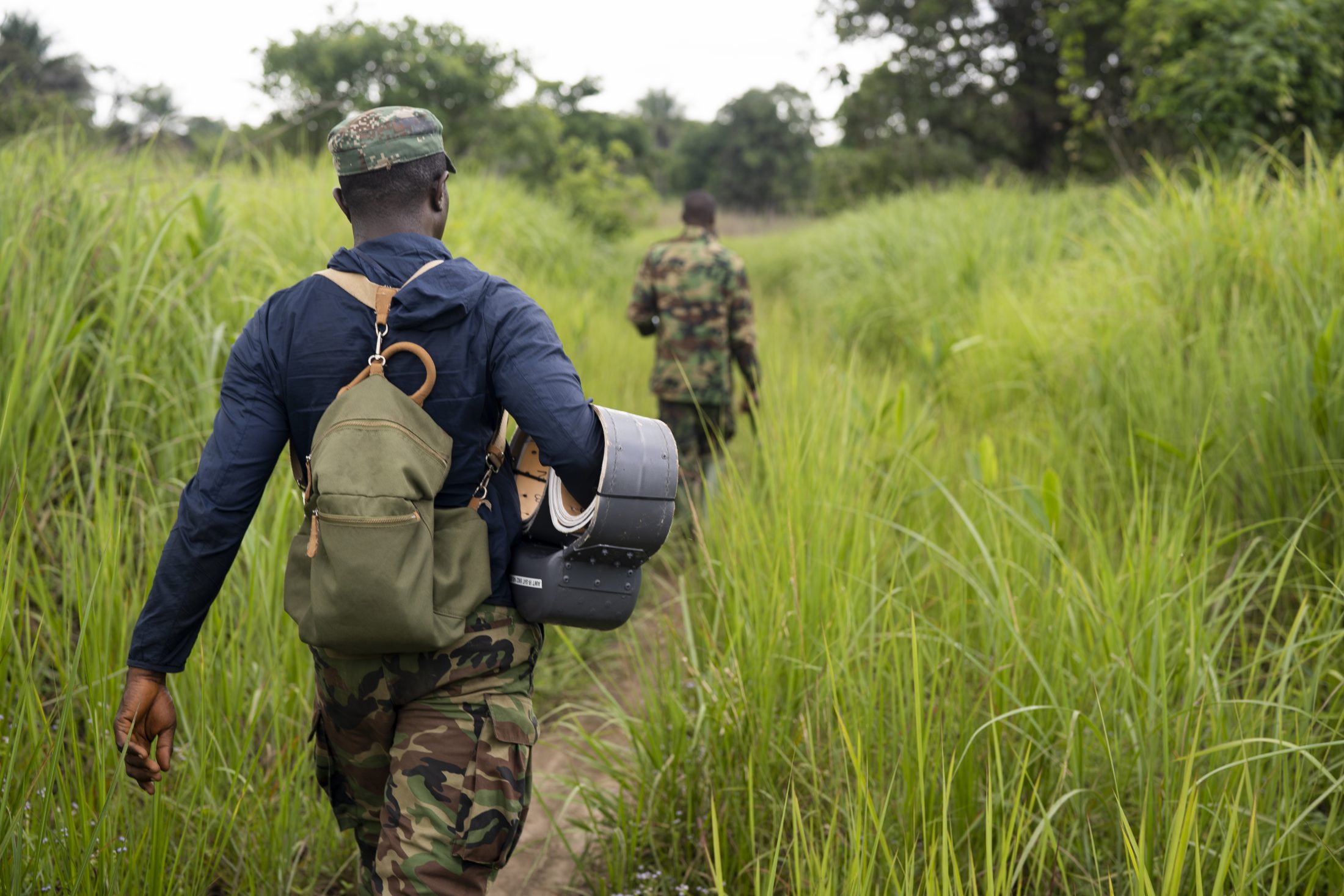 Centre Forestier de N’Zérékoré ranger carrying a satellite collar that the team is preparing to fit to Little John, the younger of the elephant brothers. 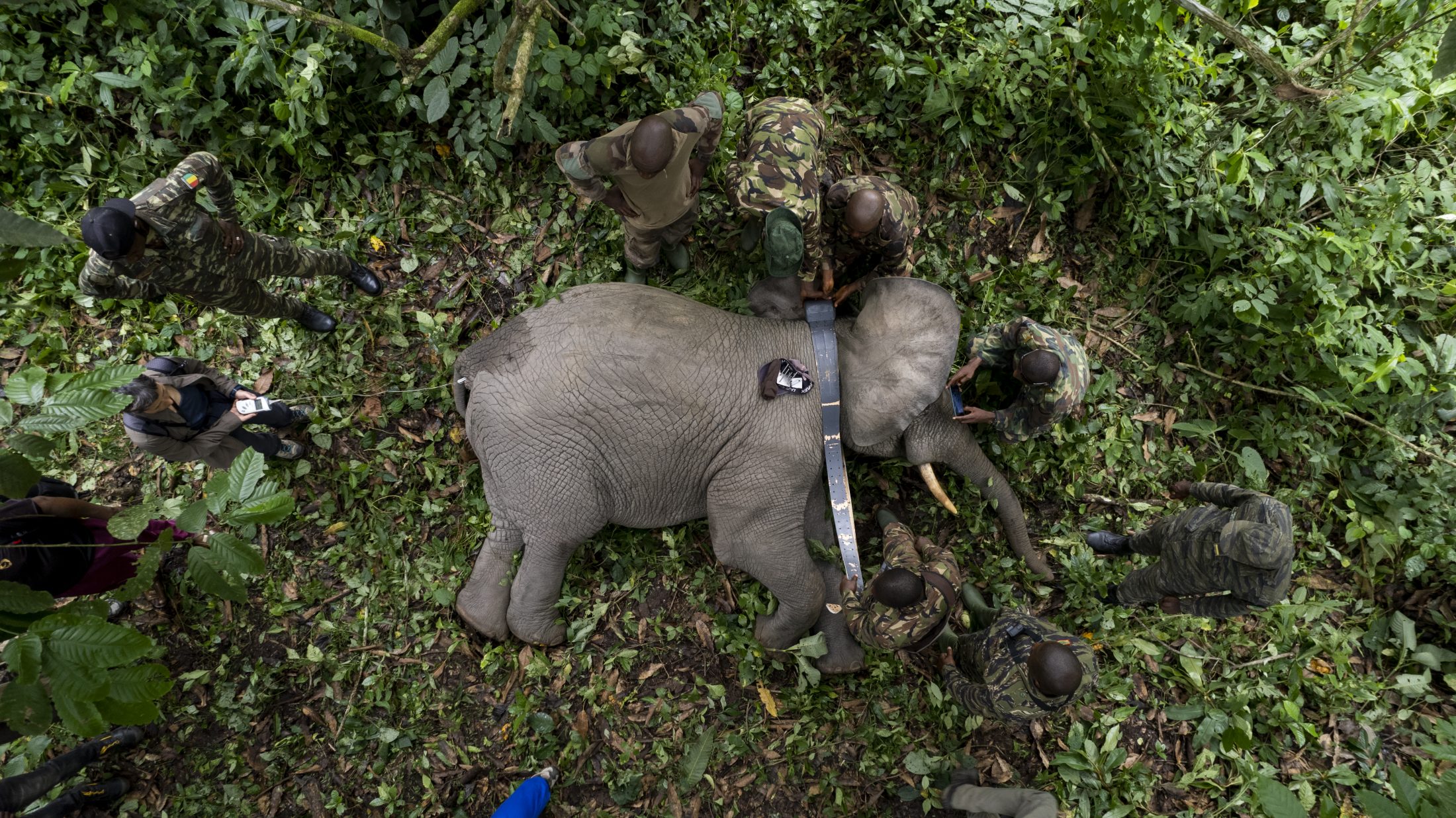 Aerial view of a prostrate Little John, surrounded by the collaring team. The tranquilised elephant is monitored closely to ensure his condition is stable while the satellite collar is fitted. 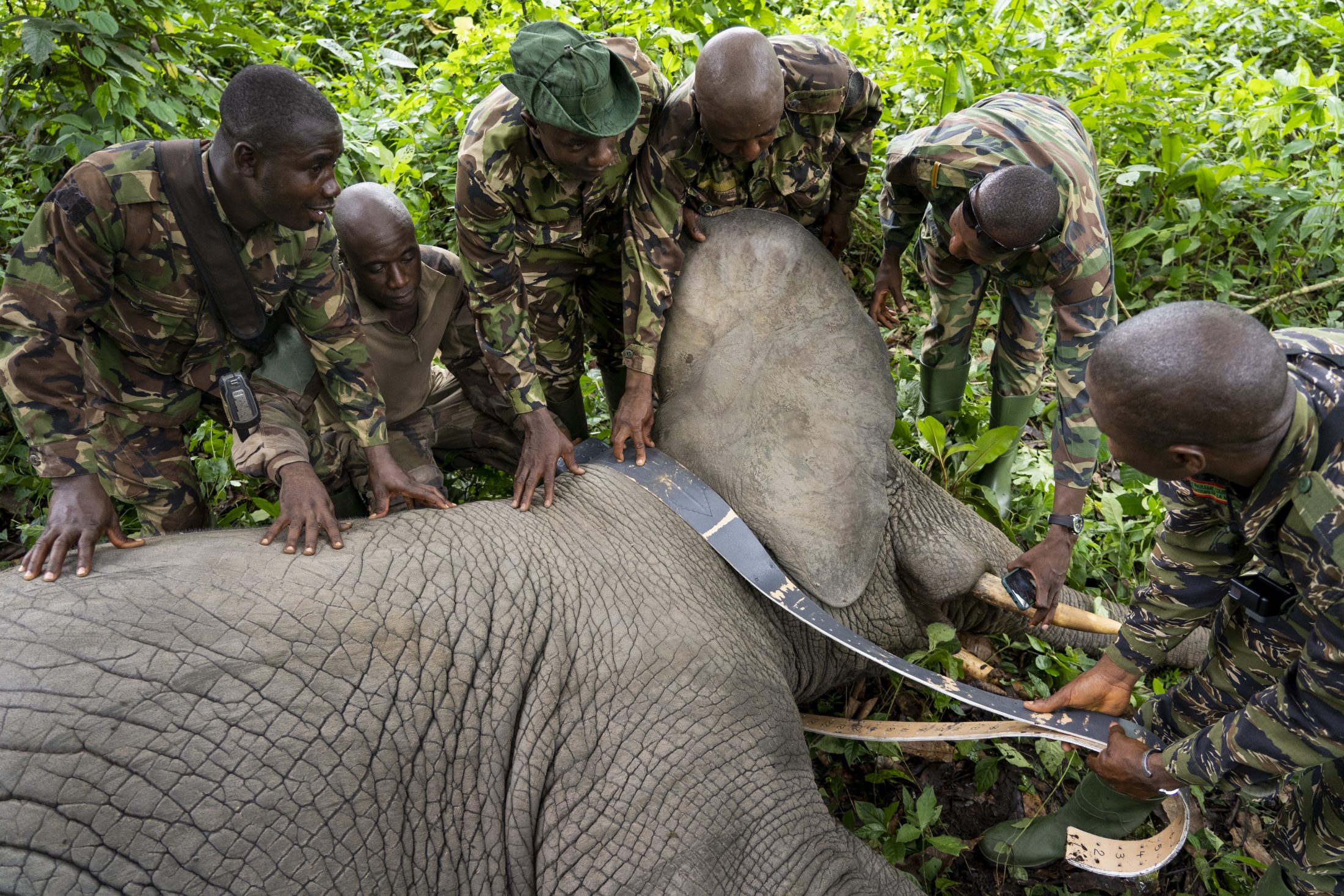 The satellite tracking collar will provide an early warning system for farmers when elephants are in the vicinity, reducing the risk of crop-raiding and conflict with communities. 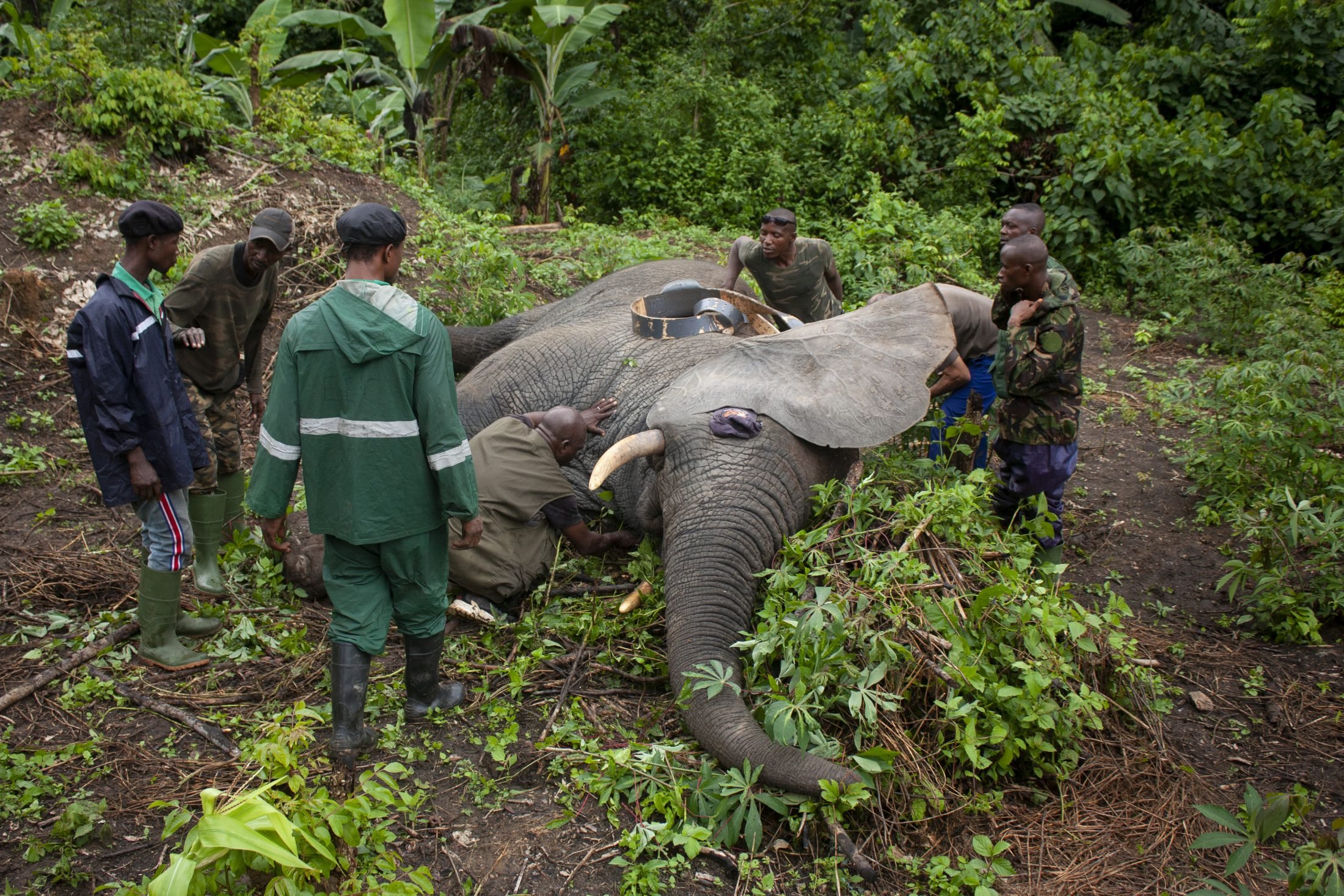 Big John, the elder elephant brother, was tracked down and tranquilised in heavy rain on the Liberia side of the border as he was returning home to Guinea following his latest adventure. 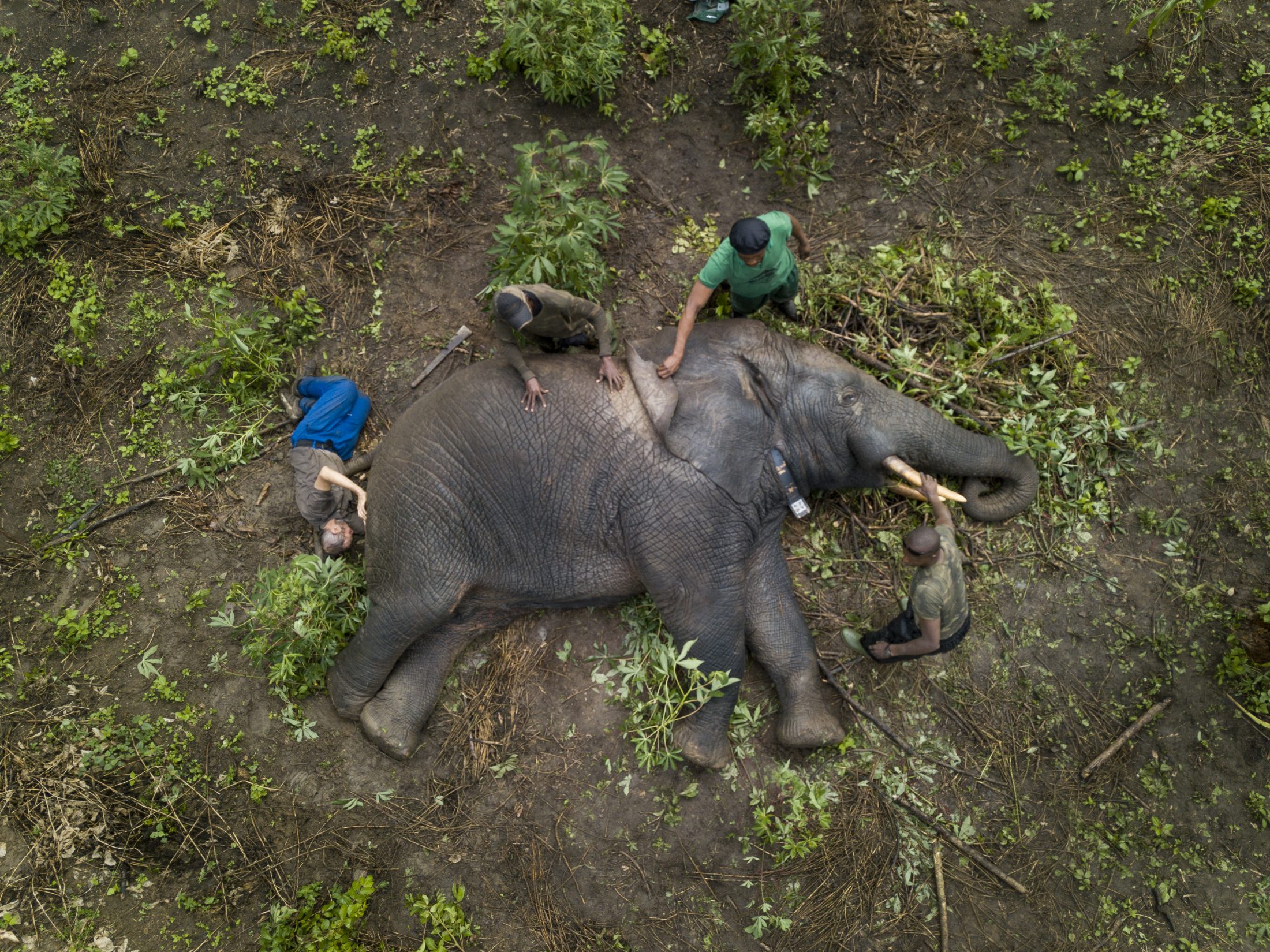 South African veterinarian Pete Morkel checking that all is well with Big John, as the newly collared elephant recovers from his anaesthetic injection. 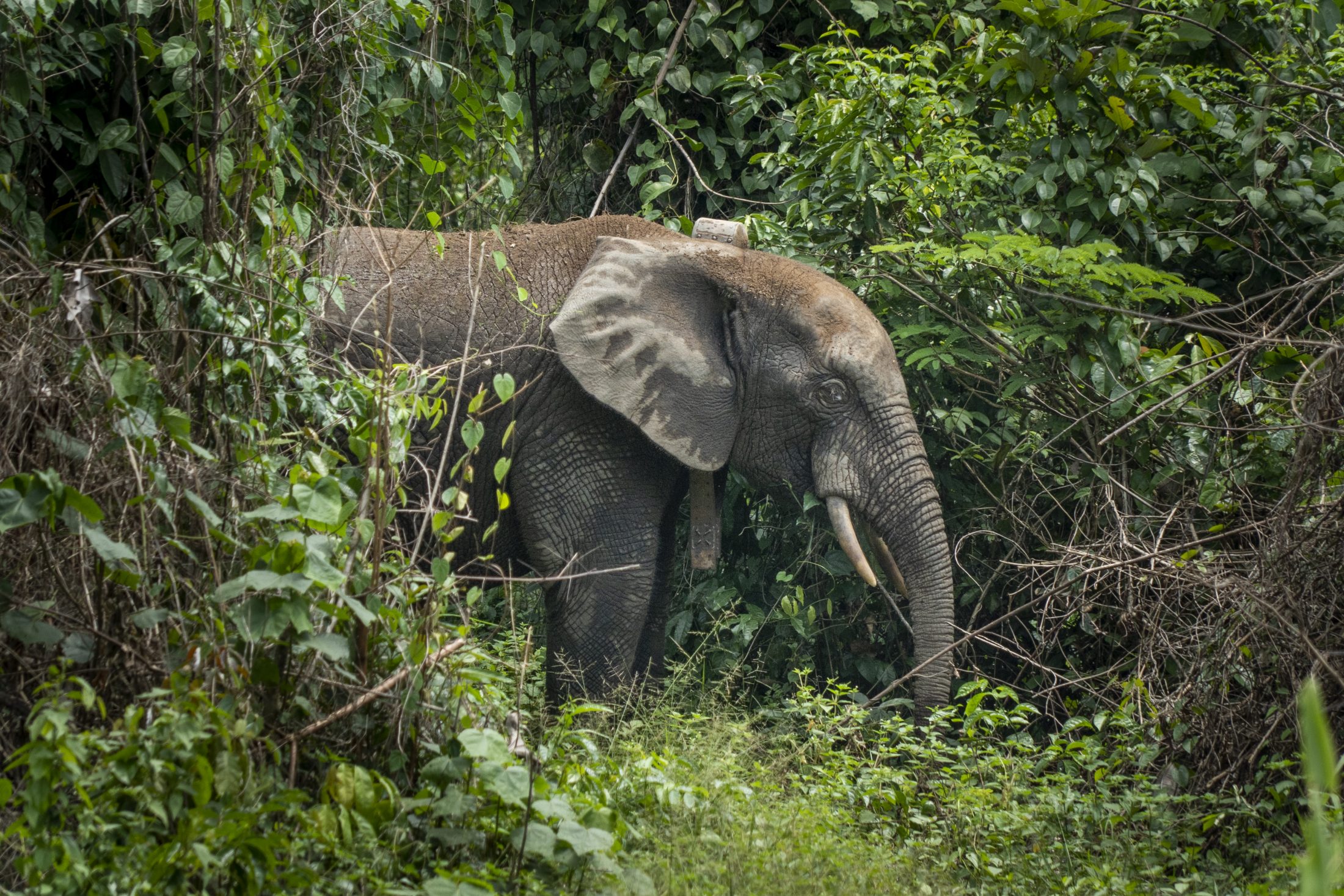 The data received from the collars will not only help mitigate human-wildlife conflict, but also improve our understanding of how elephants use this landscape, allowing us to create more effective action plans to protect them into the future.

The forests of Ziama are a vitally important stronghold for these critically endangered elephants. If the species is to survive, we have to find ways for them to co-exist with the communities that they live alongside. This is a landmark moment for our efforts to protect the species.

The success of the collaring exercise, which was supported by the African Forest Elephant Foundation, offers hope for the remnant population of a critically endangered species that is barely clinging on in this remote corner of West Africa. Finding ways for people and elephants to co-exist in this fragmented landscape is crucial to the long-term survival prospects of these magnificent animals.

Bringing forest elephants back from the brink

We're working with our partners around the world to save species from extinction. Like the pieces of a jigsaw, every last one of them is a vital part of the bigger picture. Together, we can help protect the world's endangered species. Please support our vital work today and help save our planet's irreplaceable biodiversity.