West Africa walkabout – The further adventures of the elephant brothers

Over a month has passed since a pair of pachyderms packed their trunks and went walkabout in West Africa, and their wanderlust shows no sign of being sated any time soon.

After leaving the relative safety of their long-term residence in Guinea’s Ziama Massif in August, the two African forest elephants crossed the border into Liberia before trekking around 200 kilometres across the country, leaving a trail of astonished and enchanted onlookers in their wake.

Not content with a solitary stamp in their imaginary passports, the outsized overlanders have now ventured into Côte d’Ivoire. You might imagine that elephants would give a wide berth to any country with the word ‘ivory’ in its name, but this brace of brothers appeared undeterred. 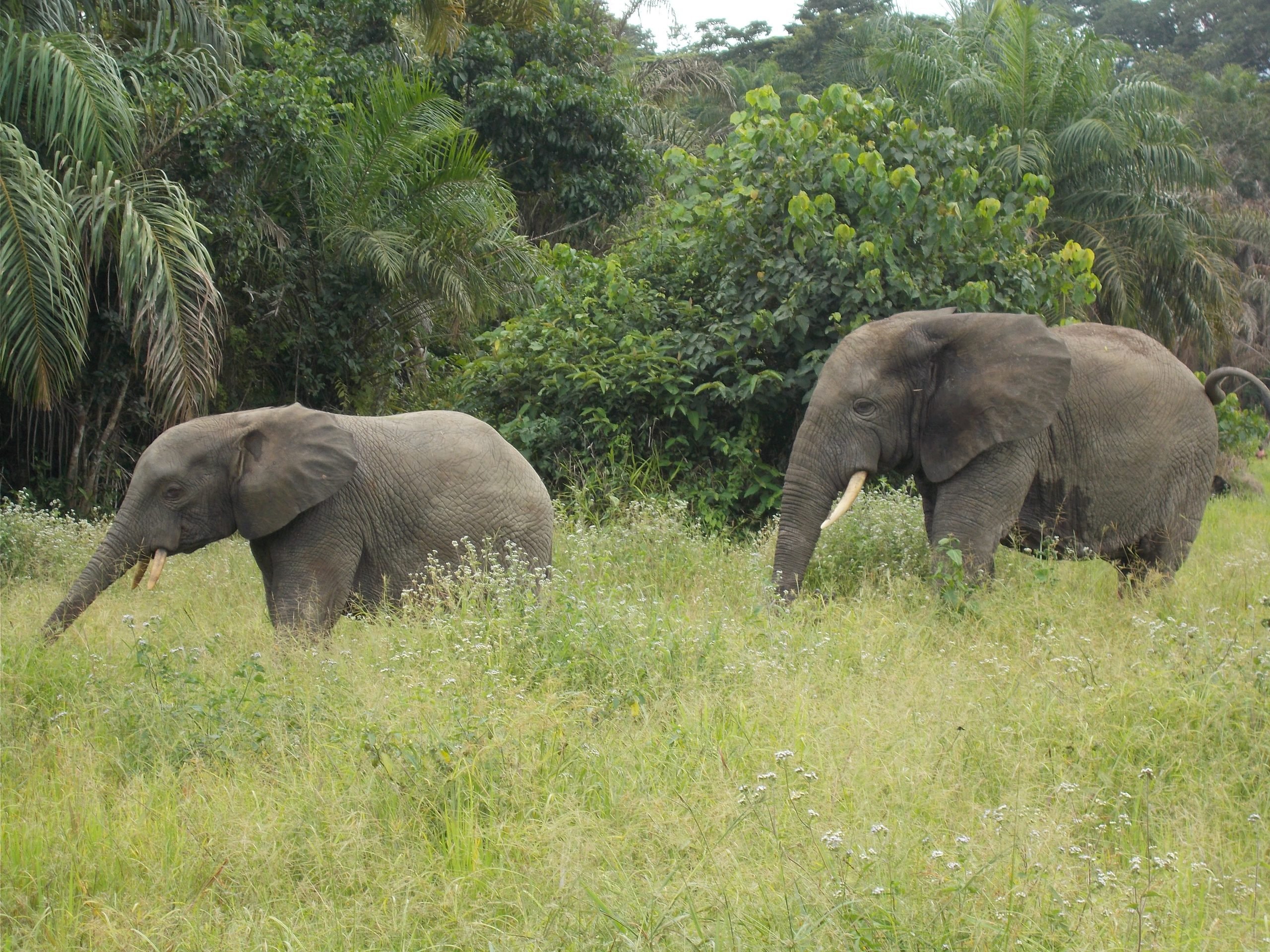 The younger male helps himself to a trunkful of lunch under the protective eye of his elder sibling. Credit: FFI

Given the prodigious distance that the elephants have already covered, it would be unwise to predict where they are heading next, but their general trajectory suggests that they could be aiming for Grebo-Krahn National Park, which would take them back into Liberia, or possibly to Taï National Park, a World Heritage site and virtually the last remaining expanse of pristine lowland rainforest in Côte d’Ivoire.

Whatever their ultimate destination, this pilgrimage is a perfect illustration of how West Africa’s remaining forest elephants are now obliged to move through a mosaic of land-use types, including forest fragments and agricultural landscapes, in order to reach forests further afield. Above all, it underlines yet again the importance of transboundary collaboration in wildlife conservation, particularly where massive and highly mobile megafauna is concerned.

Fauna & Flora International (FFI) and our local partner in Guinea, Centre Forestier de N’Zérékoré (CFZ), have been closely monitoring these two elephants – and the others remaining in Ziama – since 2016, and the experience and knowledge acquired during that prolonged period of observation has proved invaluable in supporting the efforts of the Liberian and Ivorian authorities to safeguard the unscheduled visitors. 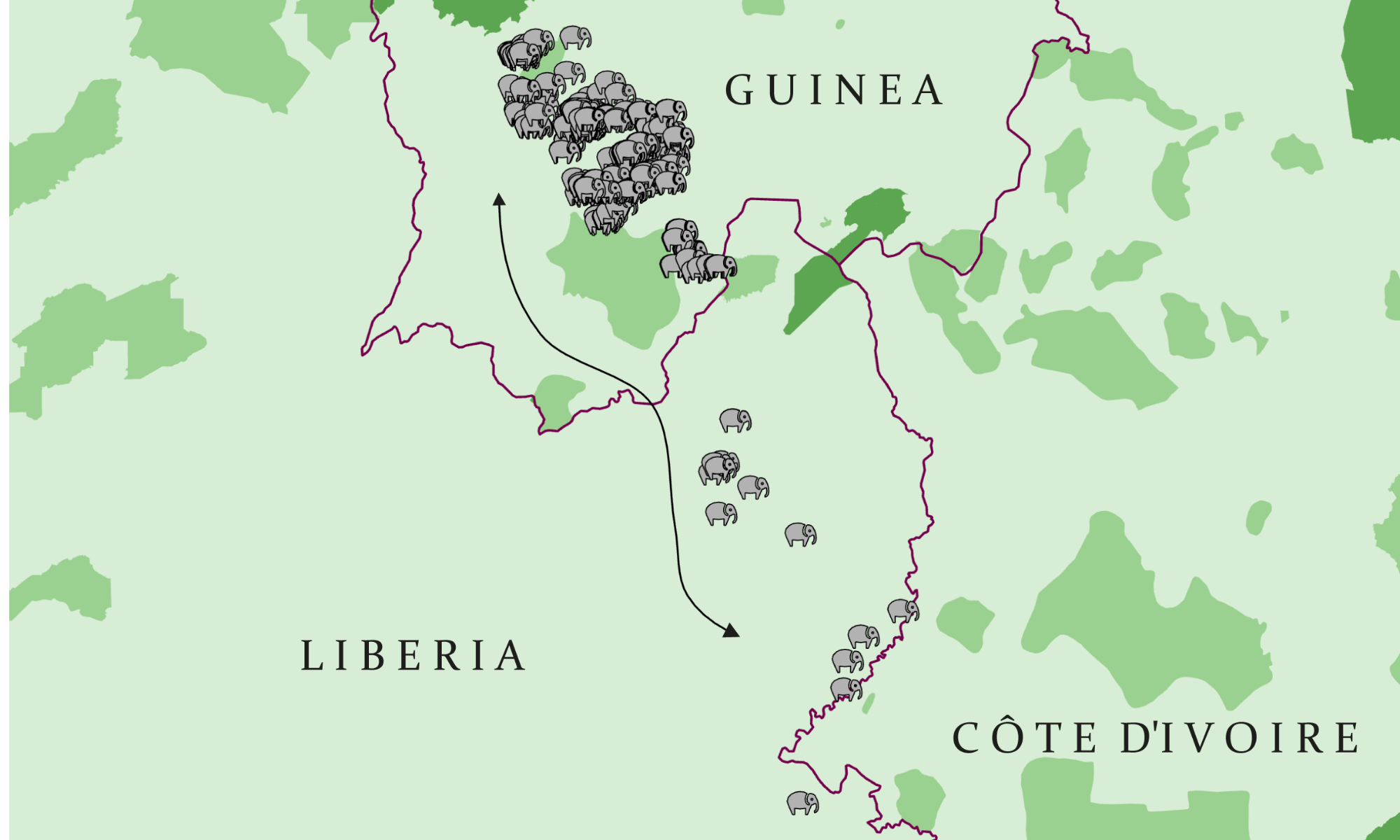 Map of the elephants’ epic journey from Guinea to Côte d’Ivoire via Liberia, providing a daily record of their location. Credit: FFI

The collaborative framework established by the various Transboundary Landscape Management agreements for Ziama–Wologizi–Wonegizi between Liberia and Guinea, and Taï–Grebo-Krahn–Sapo between Liberia and Côte d’Ivoire, has enabled the activation of communication between the various conservation partners in order to protect these elephants. For the first time, the governments of these three countries in the Mano River Union – which also includes Sierra Leone – have come together to safeguard wildlife migrating across their borders.

Thanks to multiple exchange visits across this transboundary landscape, wildlife rangers from Guinea’s CFZ, Liberia’s Forestry Development Authority (FDA) and Côte d’Ivoire’s Ministère des Eaux et Forêts (MINEF) are familiar with the lie of the land across the borders in all three countries. As a result, there is already an open channel of communication among the relevant professionals in their respective countries, which has been critical in helping to ensure that these elephants are continuously chaperoned as they explore new territory.

As the brothers blazed a trail across Liberia, for example, the elephants were tracked for several weeks by FDA rangers, with the support of community eco-guards. When the teams realised that the elephants were heading for the Côte d’Ivoire border, they immediately informed their Ivorian counterparts, at which point MINEF rapidly deployed rangers on the ground to take over round-the-clock surveillance.

That spirit of collaboration has been repeatedly put to the test in recent days, with the elephants zigzagging between Liberia and Côte d’Ivoire, accompanied by rangers from the respective countries. At the time of writing, they are being monitored by Ivorian staff after crossing into Côte d’Ivoire for a second time on 13th October, but given their recent track record, their excellent adventure may not yet be over.

Daily updates on their location are being provided, in order to gain a better insight into their migration pattern. There is speculation that the two males may be following a historical route that was used by elephants in the days before the wider forest landscape became fragmented; it is possible that the older brother may have accompanied his mother on one of these journeys before she was killed by poachers in 2016.

This map of the elephants’ progress (with forest loss since 2001 marked in red) conveys just how far they have ventured beyond protected and proposed protected areas of forest (marked in dark and light green respectively). Credit: FFI

In light of this, there is clearly an urgent need to provide secure corridors to ensure the safety of the elephants, as well as other migrating wildlife and – crucially – the communities with whom they will inevitably come into close contact. The Species Working Group of Liberia has established an emergency committee – which includes FFI, the Wild Chimpanzee Foundation, Liberia Chimpanzee Rescue and Protection, and Elephant Research and Conservation – with a view to developing a long-term action plan to safeguard these and other elephants wherever they wander throughout the Upper Guinean Forest landscape.

The success of any such initiative will undoubtedly hinge on continued collaboration between the wildlife authorities of all three countries. The initial signs are extremely encouraging and, for the sake of these magnificent elephants and West Africa’s other iconic wildlife, we fervently hope that the best is yet to come.

The African elephant is the largest living land mammal and is found predominantly in eastern, southern and western Africa.