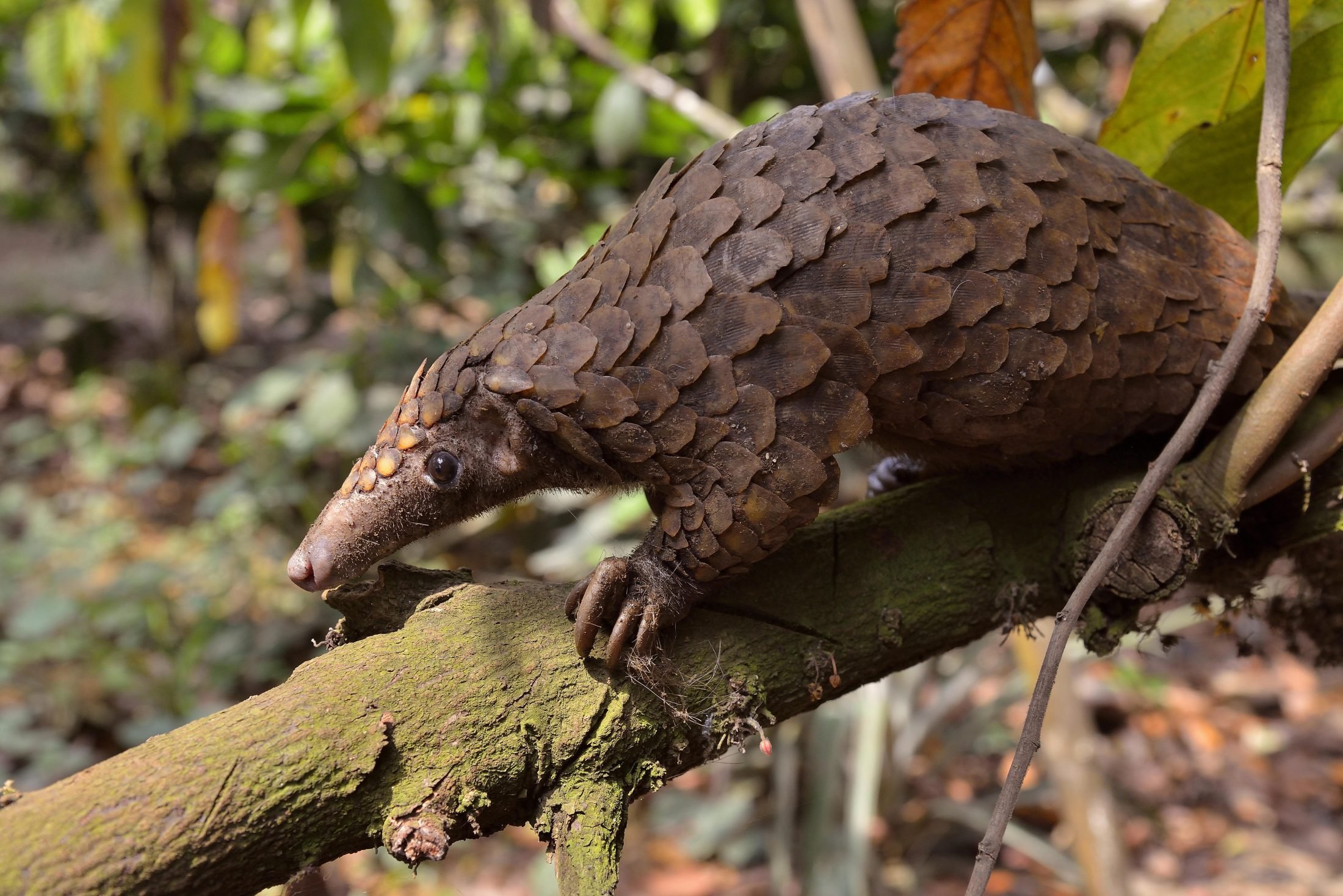 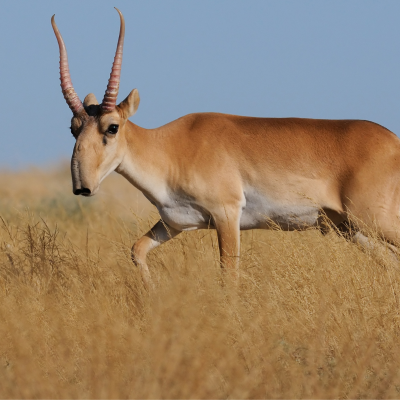 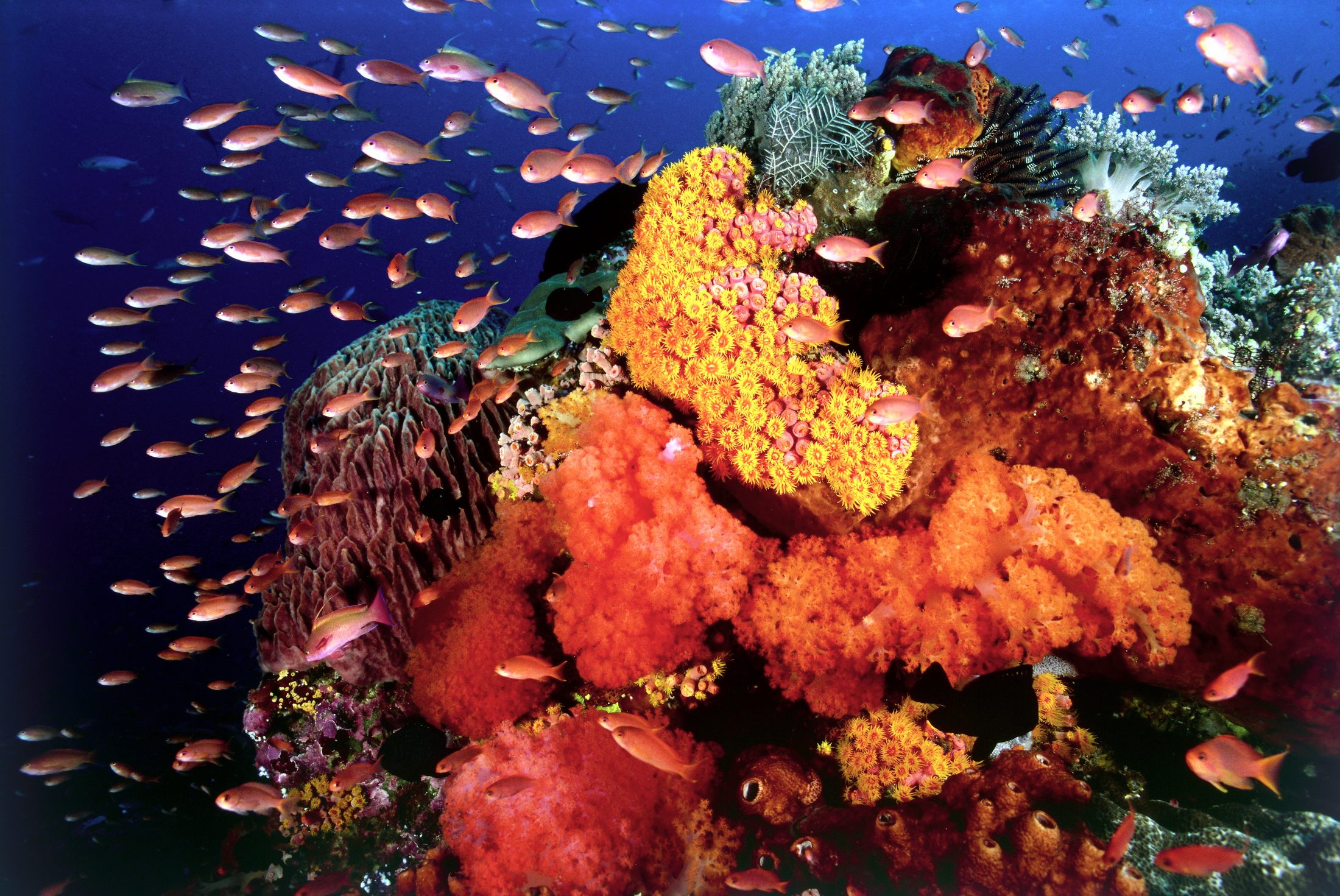 The Siamese crocodile has disappeared from 99% of its former range, following decades of hunting and habitat loss. An estimated 250 adults still survive in the wild, most of them in Cambodia. Fauna & Flora International (FFI) is working with the Cambodian government and local communities to safeguard the remaining wild crocodiles and their habitat by creating crocodile sanctuaries that are protected by community wardens.

In addition, having confirmed the presence of a small number of pure-bred Siamese crocodiles in a Phnom Penh rescue centre, FFI and partners established the first conservation breeding programme in the country – a vital source of genetic diversity for the reintroduction of the species into new areas. In 2012, the Cambodian Crocodile Conservation Project launched a programme to release pure-bred individuals back into the wild at suitable sites in the Cardamom Mountains.

As part of this pioneering programme, FFI and our partners in Cambodia have just completed the biggest ever release of captive-bred Siamese crocodiles into the wild. This represents a massive boost to the survival chances of a critically endangered reptile that was feared extinct until its rediscovery by an FFI-led survey team in the remote Cardamom Mountains more than two decades ago.

Have I got noose for you? Staff at the Phnom Tamao conservation breeding facility – managed by FFI in partnership with the Cambodian Forestry Administration – attempt the delicate task of capturing one of the Siamese crocodiles earmarked for release into the wild. A juvenile needs to be deemed large enough to fend for itself in order to be eligible for selection. 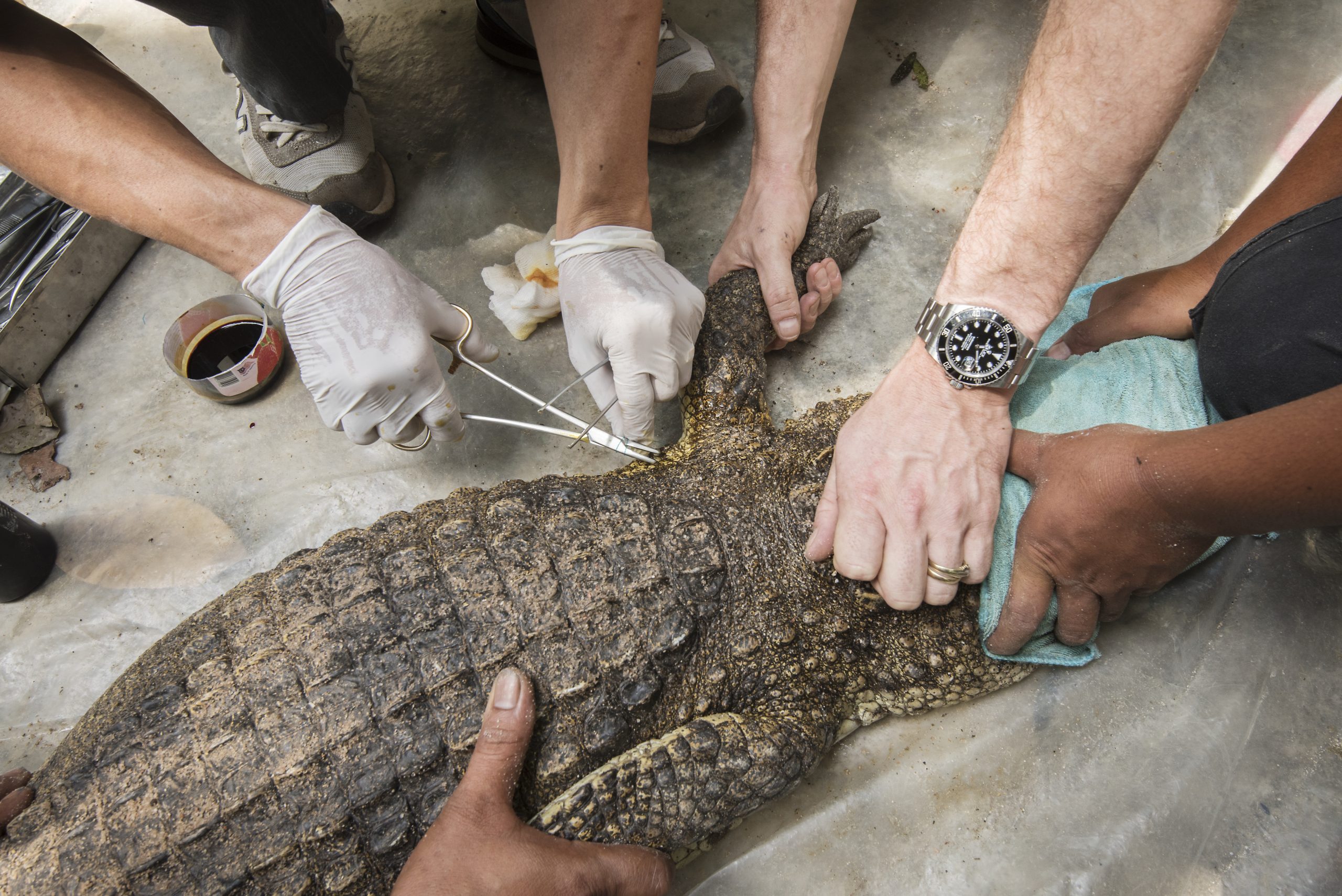 A captive-bred Siamese crocodile is gently restrained while an acoustic transmitter is fitted. It’s the first time that this form of tracking technology has been deployed to monitor the movement of released Siamese crocodiles. Radio tracking has met with mixed success in the past, but there are high hopes that acoustic monitoring will be more effective. 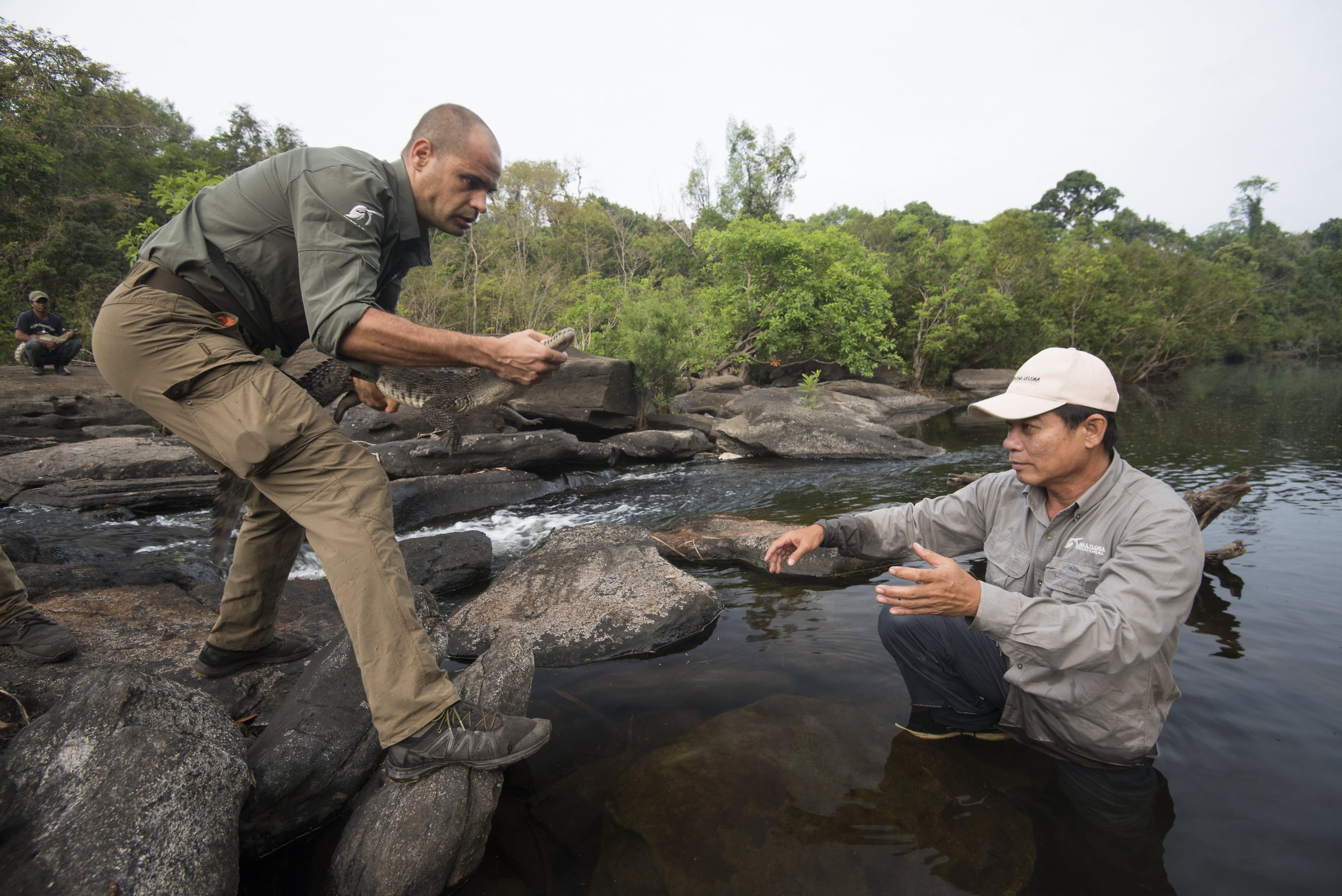 Pablo Sinovas, FFI’s Flagship Species Manager in Cambodia, hands a tagged juvenile Siamese crocodile to our Field Coordinator Hor Leng, who prepares to release it into the river at Chhay Reap. In total, 25 crocodiles were set free, the programme’s most ambitious release to date; each of the previous releases was limited to a maximum of ten individuals. 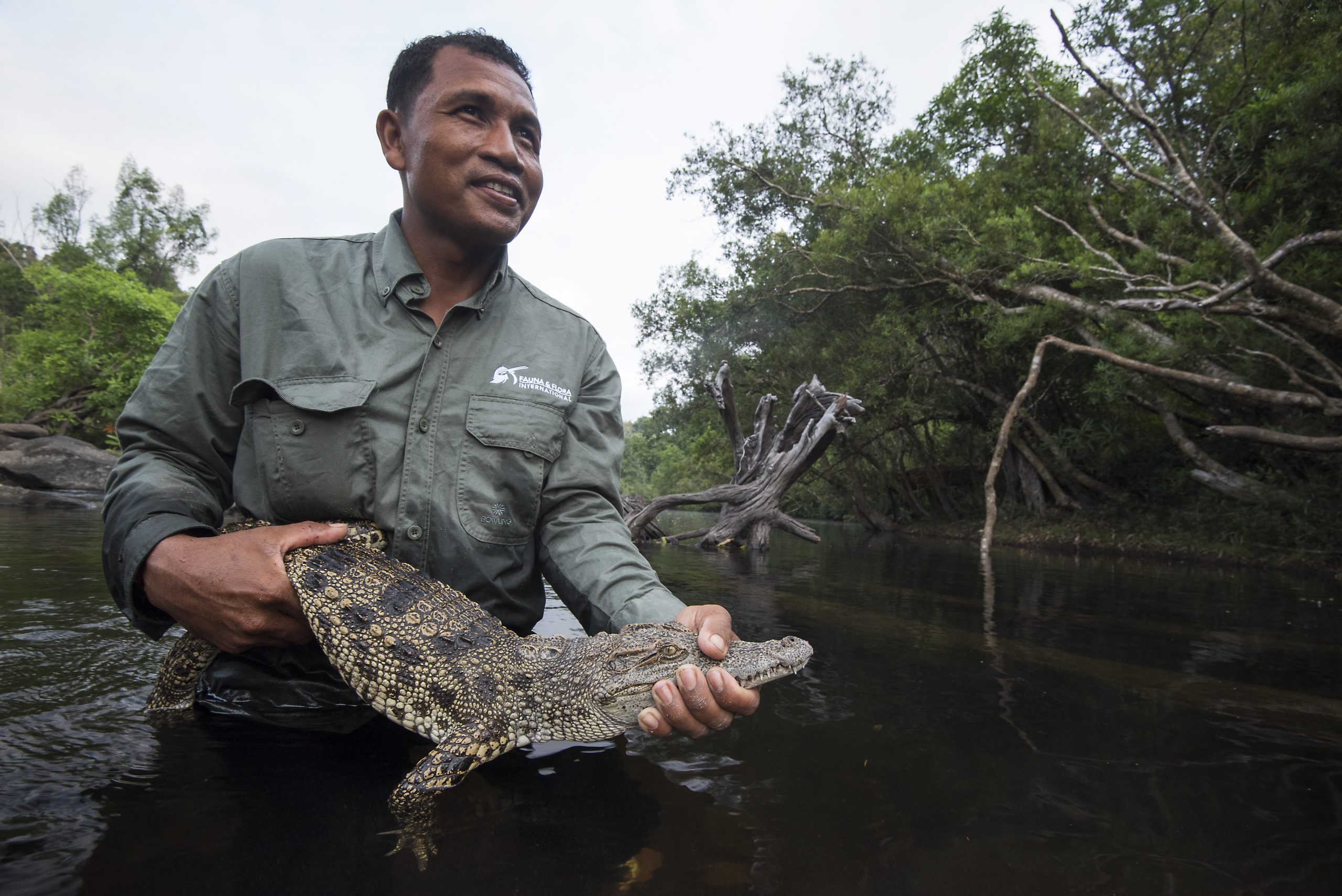 Head warden Sim Khmao, standing waist-deep in prime Siamese crocodile habitat, prepares to release another juvenile. Community wardens continue to play a pivotal role in the success of the Cambodian Crocodile Conservation Project. In April 2021, the team from Chhay Reap received a prestigious international ranger award for its monitoring and anti-poaching work.

“This is the biggest release of Siamese crocodiles that we have ever attempted and a major step forward in our efforts to boost the recovery of this critically endangered species in one of its last remaining strongholds. It’s an exciting moment for conservationists but also for all of Cambodia. Step by step, one of the world’s rarest reptiles is being brought back from the brink of extinction.” 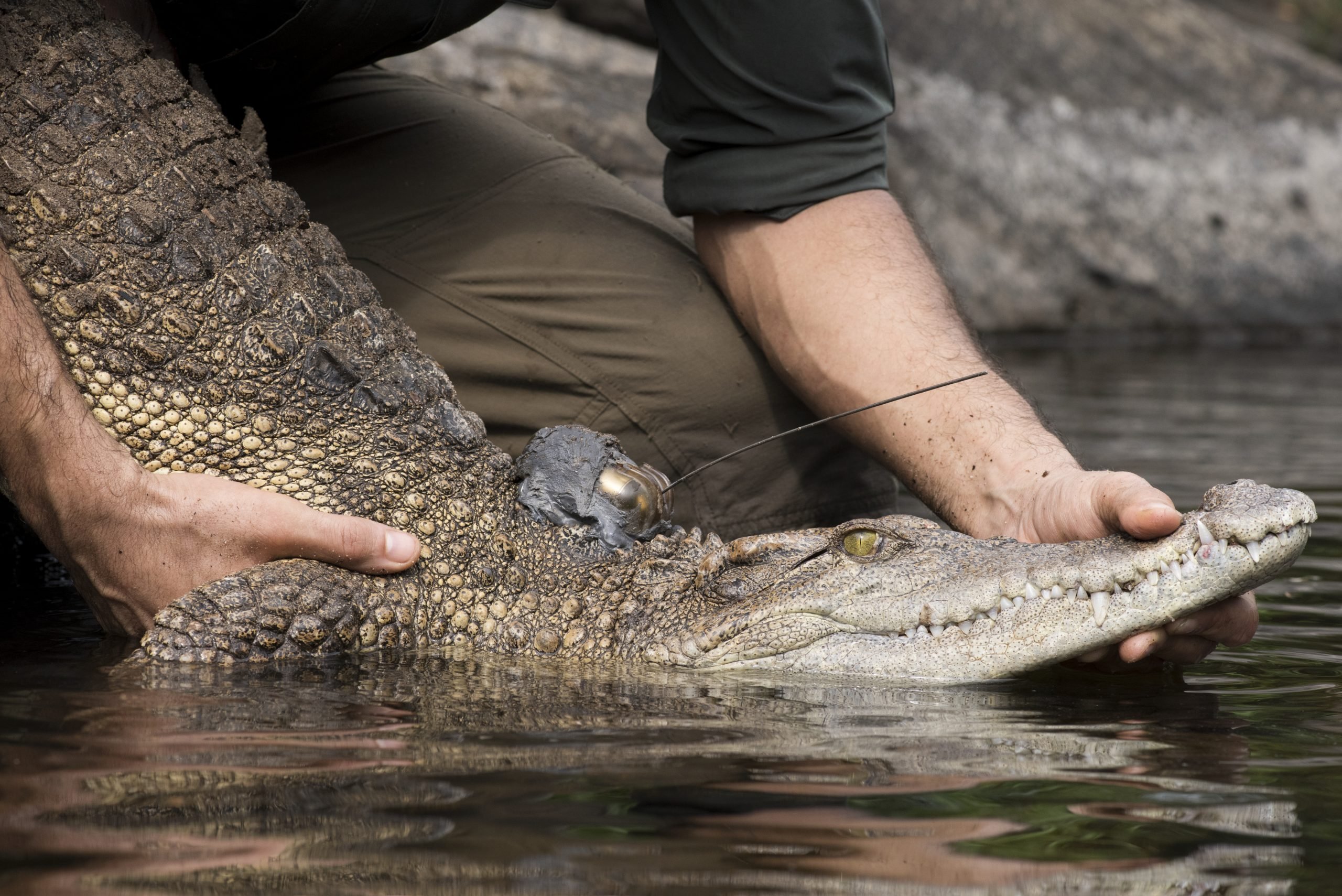 Before being released, three of the largest among the 25 selected crocodiles were fitted with satellite tags in addition to acoustic tags. The waterproof device – which will enable the team to collect vital data – is securely attached to the crocodile’s back well behind its head, and does not inhibit movement or otherwise affect natural behaviour. 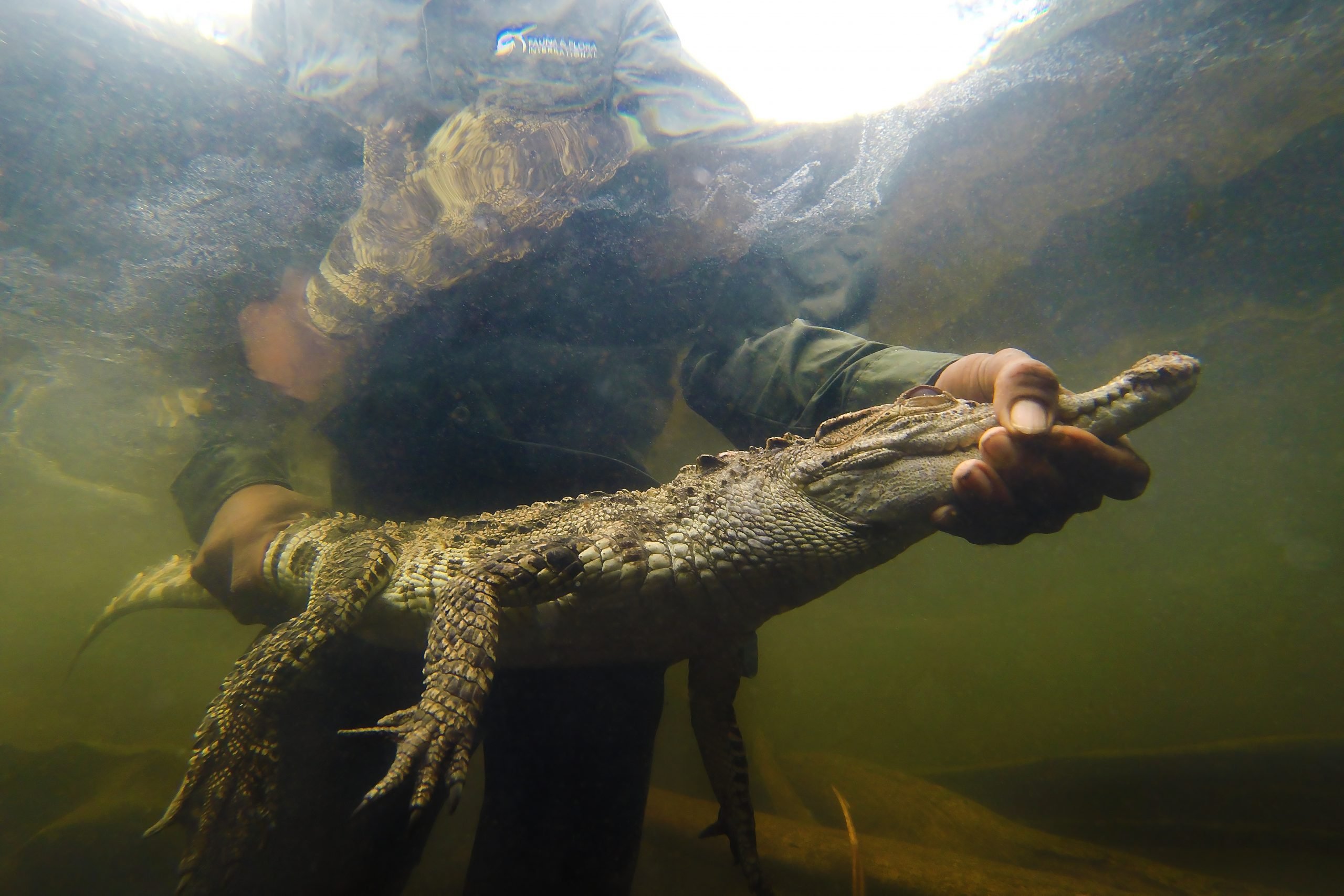 Croc’s-eye view. An underwater photograph taken with GoPro equipment records the moment before release for one of the world’s rarest reptiles. A crocodile’s eyes are protected by a third eyelid, a membrane that slides across when the reptile submerges. 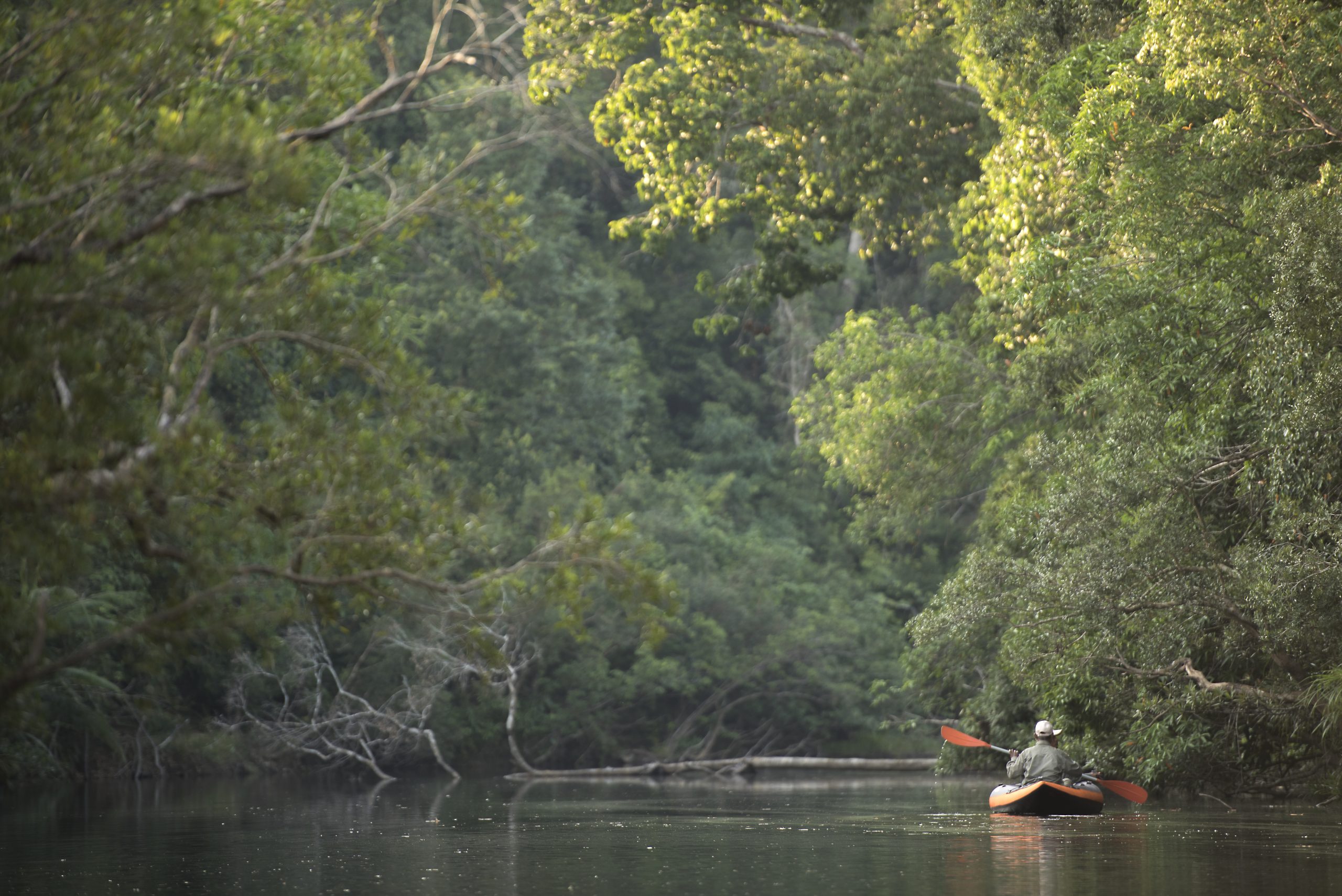 Community wardens conducting a survey along the Sre Ambel river at Chhay Reap, looking for signs of Siamese crocodiles and for potential threats such as fishing nets. Previous surveys of the species’ wetland habitat have found evidence that released crocodiles are breeding in the wild. 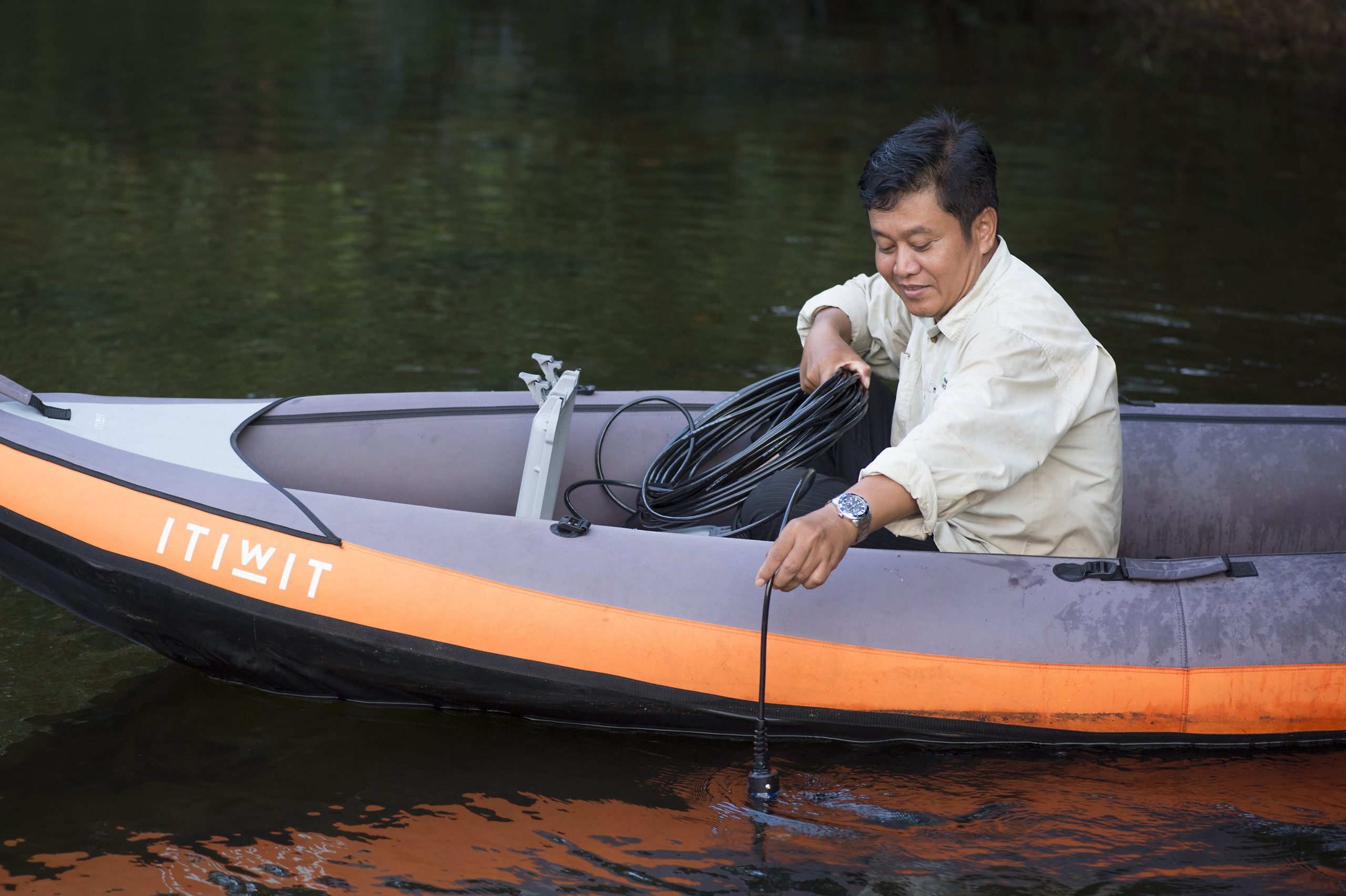 Sam Han, manager of the Cambodian Crocodile Conservation Project, dips a hydrophone into the river at Chhay Reap. The device detects ultrasonic pulses in the water, allowing the team to record the presence of acoustically tagged Siamese crocodiles even when they are lurking out of sight beneath the surface. 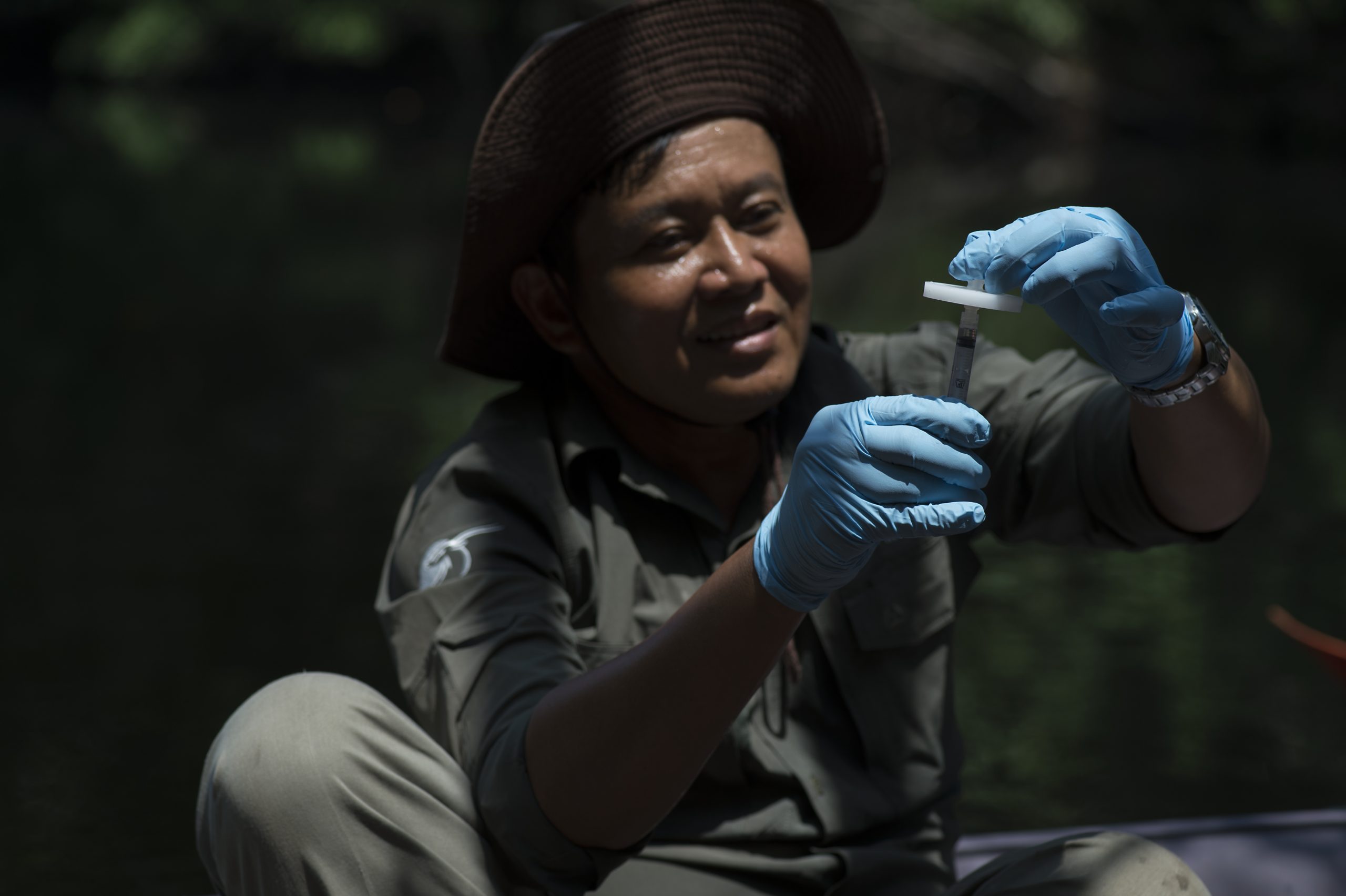 In partnership with NatureMetrics, FFI is using cutting-edge environmental DNA (eDNA) technology to test for the presence of certain species in freshwater habitats at several of our project sites around the world. Traces of mucus, faeces and other organic matter collected from water samples are passed through a simple filtering kit, demonstrated here by Sam Han. Reptiles are not easily detected using eDNA sampling, but a species-specific primer for the Siamese crocodile has been developed – and tested in captive conditions. 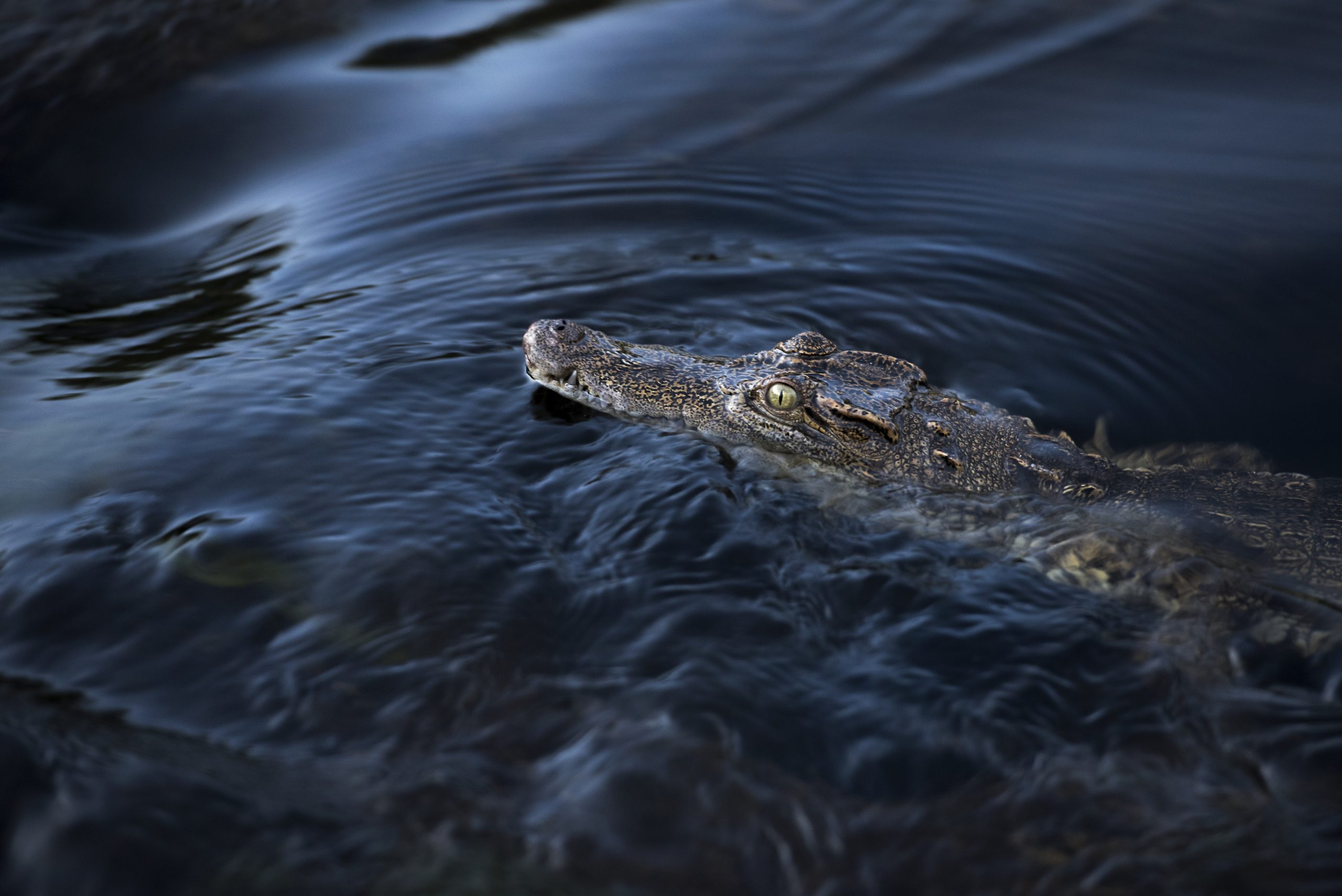 Home at last. A Siamese crocodile samples its first taste of freedom in one of the species’ last remaining strongholds. Safeguarding the remaining wetland habitat of this critically endangered species will be crucial to its long-term survival.

The success of this groundbreaking conservation breeding and release programme – which has now seen well over 130 crocodiles released into the wild – is mirrored by the effectiveness of community-led monitoring and anti-poaching activities at key breeding sites in Cambodia. The Siamese crocodile is still on the critical list, but the intensive care that this species has received from FFI and our in-country partners in the two decades since its rediscovery is beginning to pay real dividends.

Too many species are in grave danger of being wiped off the face of the Earth. Like the pieces of a jigsaw, every last one of them is a vital part of the bigger picture. Together, we can help save endangered species before it’s too late.

Please support our vital work today and help save our planet's irreplaceable biodiversity.