Everyone loves a picture of a pet rabbit, but when the cuddly creature in the photograph turns out to be a vanishingly rare species on the brink of extinction, it isn’t only the bunny huggers who sit up and take notice.

Sumatran striped rabbits are seldom spotted, in either sense of the word. Known only from a dozen Dutch museum specimens collected in the early 20th century, plus an occasional sighting in the wild and a handful of camera trap images, the species is widely considered to be the rarest rabbit in the world. Finding one flaunted on Facebook is the Indonesian equivalent of stumbling upon a thylacine in a Tasmanian pet shop, and the conservation community was quick to respond.

After receiving a tip-off about the Facebook post, Fauna & Flora International (FFI) and the Kerinci Seblat National Park authorities quickly tracked down the would-be seller and rescued the priceless rabbit, which was held in safe custody until it was ready to be released.

Director of the national park, Tamen Sitorus, said: “While Kerinci Seblat is world famous for its biodiversity, it is the larger charismatic animals like tigers, elephants and helmeted hornbills that usually make the headlines. People so often forget this park also protects rare species like the Sumatran striped rabbit and its habitat; we have the highest peat swamp forests in Asia, for instance – and amazing moss forests.”

FFI’s Deborah Martyr, who advises the park’s Tiger Protection & Conservation Units, is one of the few people fortunate enough to have experienced a close encounter with a Sumatran striped rabbit in the wild. She is in no doubt about the enormous scientific significance of this unexpected opportunity to eyeball such an elusive species: “Very little is known about this animal, other than that it shows a marked preference for mossy hill and submontane forest. The only specimens from Sumatra date back to the Dutch colonial period – and are in the Netherlands, not Indonesia.”

It is understood that the rabbit was captured opportunistically by a local farmer who encountered it at the edge of the national park next to a river that had just flooded violently. It had a slight injury to its flank – possibly sustained during the flash flood – but has now been safely released back into the forest by the park rangers, at a site chosen on the basis of existing camera trap data. 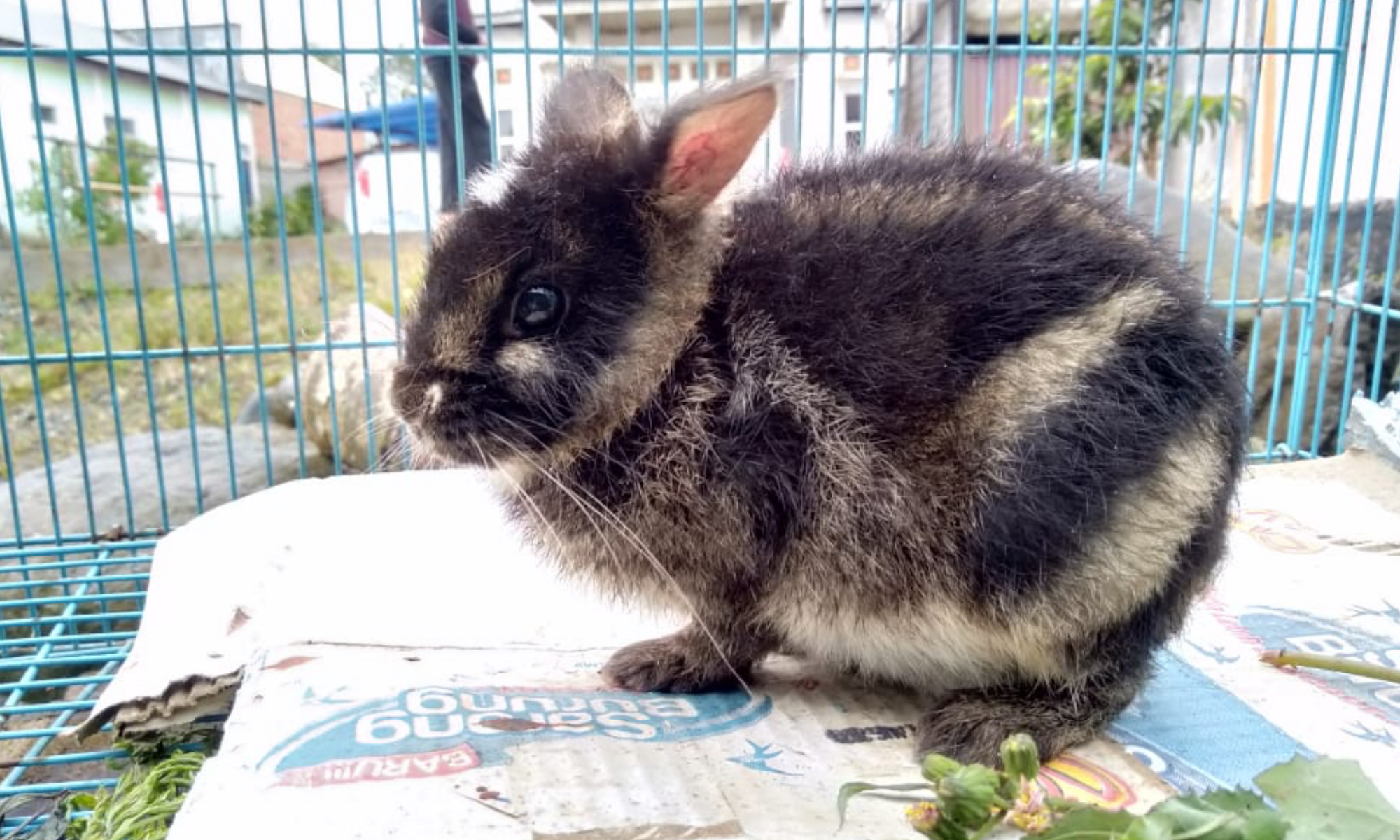 The rescued rabbit prior to release. Credit: KSNP

“The successful rescue of the Sumatran striped rabbit was a true team effort and is testament to the broad network of support that operates around the park – online and offline; once the farmer who caught this rabbit understood its rarity, he was happy to see it returned to the national park,” said Martyr.

“I am proud of my staff for responding to this report so professionally and returning the rabbit to the park,” said Tamen Sitorus. “I hope the samples taken and other data collected will be useful to Indonesian scientists in building knowledge of this little-known animal. This rescue and release were only possible due to the strong collaboration between the national park and other stakeholders including FFI, other institutions and local communities. That support from all stakeholders is key to the park’s sustainability.”

For Herizal, a community ranger with one of the Tiger Protection & Conservation Units and a member of the release team, this was the first time he had seen a striped rabbit despite more than eight years of patrolling deep in the national park: “It’s always good to release animals back into the wild – and this was much less stressful than releasing a tiger! We let it go and it looked around – and then started eating leaves. It seemed very relaxed.’’

By a strange quirk of fate, a nocturnal snapshot of a Sumatran striped rabbit (main picture) was recently included in a magazine feature showcasing some of FFI’s historical camera-trapping successes, not only in Sumatra but across the globe. This image, captured in 1997, was the first ever photograph of the species in the wild.

The Sumatran striped rabbit is categorised as Data Deficient on the IUCN Red List. It is one of only two species in the Nesolagus genus. Its mainland counterpart and closest surviving relative – from which it is thought to have diverged around eight million years ago – is the Annamite striped rabbit. Discovered as recently as 1996 and named after the mountain range on the Laos-Vietnam border where it was first found, this species has also been captured on camera by FFI in recent years. The two species share many other common characteristics, most notably that their futures are hanging by a thread.

Habitat loss and fragmentation pose by far the most significant threat to the survival of the Sumatran striped rabbit. Kerinci Seblat National Park appears to be one of the last remaining strongholds of this forest-dependent species. It is evidently not a frequent victim of hunting or the pet trade, owing to its natural rarity, largely nocturnal habits and, apparently, the unpleasant taste of its meat. However, that doesn’t preclude it from being caught in snares set for other species as it forages on the forest floor.

In that regard, the routine and intelligence-led forest patrols conducted by the Tiger Protection & Conservation Units as part of their anti-poaching activities have a crucial role to play. Over the years, these crack teams have covered a cumulative distance of over 30,000 kilometres and removed thousands of snares – often detected using information from supportive forest-edge farmers.

We can add the Sumatran striped rabbit to the growing list of species – from sun bears and Sunda pangolins to Malay tapirs and helmeted hornbills – that are benefiting from the work of FFI and our local partners in this extraordinary wildlife haven. In the years ahead, its survival will depend on the collective efforts of all those who are working to protect its forest home from poaching and other forms of illegal activity.

Sumatran tigers are the smallest of all tiger subspecies, and have a more bearded and maned appearance. Listed as critically endangered, only around 350-400 of these iconic cats remain in the wild.