Dusky denizen of the Med

The dusky grouper inhabits rocky reefs in the Mediterranean Sea, eastern and south-western Atlantic and western Indian Ocean. It is a large fish, measuring up to 1.5 metres in length and occasionally reaching over 50 kilos in weight.

Its big head, wide mouth and jutting lower jaw give the dusky grouper a slightly prehistoric look, and the distinctive fungus-like blotches on its skin add to its strange appearance.

Dusky groupers favour habitat with a rocky bottom. Territorial, and largely solitary outside the spawning season, they are mainly ambush feeders, sucking in their prey and swallowing it whole.

One of the most remarkable characteristics of this and other grouper species is that every fish begins life as a female before turning into a male once it has attained a certain age and size. This gender reversal most frequently occurs at around 12 years old.

At a glance
Epinephelus marginatus

Marine protected areas are vital to the long-term survival of the dusky grouper.

The age of the oldest recorded dusky grouper.

The ratio of males to females recorded at a typical dusky grouper breeding site.

In recent decades, dusky grouper numbers have declined alarmingly, particularly in the Mediterranean Sea. The Turkish government was so concerned that it took the unprecedented step of introducing a nationwide ban on all grouper fishing in September 2016.

Growing demand for this popular food fish from the restaurant trade is leading to unsustainable levels of exploitation, particularly by commercial fisheries, and the species is threatened throughout its range. Seagrass beds, which provide a vital refuge for juvenile groupers, are disappearing at an alarming rate. Trophy-hunting for adult fish, particularly using spearfishing, also takes a heavy toll.

Groupers are an easy target due to their large size and their habit of gathering in greater numbers at spawning sites. Their slow growth rate and unusual life cycle also affect their ability to recover from overharvesting – female dusky groupers take five years to reach sexual maturity and at least a further five years to transform into males, making it even more difficult for these extraordinary fish to regenerate quickly and replenish their dwindling population.

Overfishing is driving groupers and many other species to the brink of extinction. Please help us to protect them by supporting our work.

How FFI is helping to save the dusky grouper

Marine protected areas, particularly those in which fishing is totally banned, offer important sanctuaries for species like the dusky grouper, allowing populations the breathing space to build up their numbers and recover from overexploitation.

In 2009, six no-take zones were officially established in Turkey’s Gökova Bay – itself a marine protected area. Initially, however, these zones were little more than the marine equivalent of ‘paper parks’, protected in name alone. In 2012, FFI joined forces with local partner Akdeniz Koruma Derneği to strengthen enforcement of the no-take zones by actively engaging communities in the conservation of their marine biodiversity.

As part of this work, we helped put in place a community ranger programme that used ex-fishers to patrol the no-take zones and improve enforcement of fisheries legislation. We have witnessed a dramatic recovery in local fish stocks since we began documenting the results, and grouper numbers have markedly increased.

We are also promoting the consumption of invasive species such as rabbitfish that are starting to colonise the eastern Mediterranean. This has a dual benefit for species such as the dusky grouper, because it helps to reduce competition from alien species by controlling their numbers, and also points consumers towards a relatively abundant new arrival, which in turn alleviates the pressure on threatened native fish. 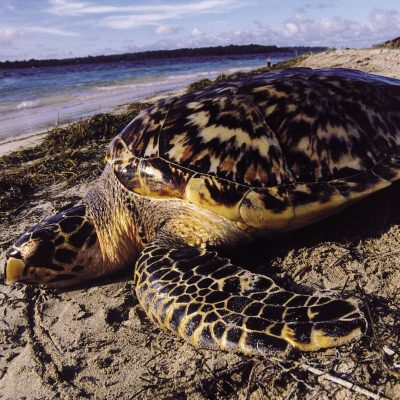 Turkey is a cultural melting pot with a rich history and varied landscape that ranges from arid plains to mountains. With coastlines along four seas, it also has a rich and varied marine environment.