Would you like pork blood stew with your fertilised egg, Sir?

The common question people ask any Pinoy (a colloquial term for a person from the Philippines) is if he or she eats balut. Balut is a famous (or infamous) Filipino delicacy/street food which is essentially a boiled duck egg with fertilised embryo inside, typically between 17 to 20 days in gestation – a description that can send a crippling chill down the spine of grown men!

The fact that balut is included in the “10 most disgusting foods/delicacies in the world” list, which also includes dinuguan (pork blood stew) says a lot. 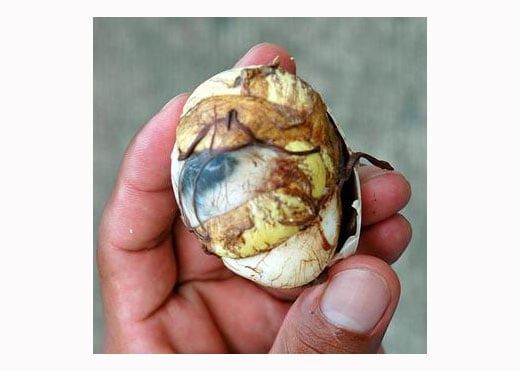 In our work in conservation, sometimes we have this ‘balut’ attitude. We often see the world using just our own perspectives and forget that we need to take them off from time to time and use each other’s lenses to better understand the issues we face. We tend to jump to conclusions and judgement based on stereotypes or based on our own rubrics or comfort zones. Too easily, our own biases kick in: gag-reflex!

When I Googled balut, I saw that there are many similar ‘weird’ egg delicacies in China, Vietnam, and Cambodia, not to mention the UK’s very own pickled eggs! The Pinoy disgusting delicacies have counterparts here in the UK too. For example, as dinuguan is to blood sausages/pudding, kilayin/bopis is to haggis.

But what about Marmite, or Vegemite? In the orient, the closest thing I can think of (in terms of taste) is the bagoong (fermented shrimp paste) or fermented bean paste for the Koreans/Chinese. We would not put bagoong on our toast though – that would be disgusting!

My point here is this: something that may be disgusting to one might not be for the other. We work with different stakeholders on the site level, and conservation becomes more difficult to achieve when stakeholders work on the areas of differences rather than the areas of commonalities. Until we strip out the language barrier and have an open mind, we will remain in that perpetual cycle of misunderstanding and conflict.

The balut is a reminder for me of the great challenge and opportunity that lies ahead. When assessing organisational capacities, which lenses are we using? And when we design capacity building programmes, do we aim to make clones of ourselves? Are we aiming to fashion some cookie cutter or a sheep dip training programme?

I remember having a meeting with an admin/HR person of a charity I knew in the past. She made a remark that what her organisation needed was to train up all the heads of the conservation units to be good managers. So the process of training up commenced.

This move was very costly because as that organisation began to have more managers it started to lose leaders. As the organisation ‘brand’ (read: logo!) became more prominent in the organisation, it lost its sight of what makes their organisation unique and stand out: conservation advocates!

The lesson for me is that people might not look at balut or Marmite favourably. But to force people not to eat it or ostracise people who happen to eat balut is not the way forward. We should embrace the balut as it is, no pretences, as one may embrace Marmite!

Our work at Fauna & Flora International (FFI) allows us to capitalise on that liking for the balut and Marmite and perhaps give it a new spin without changing its character as a balut – into a new balut dish (with some chips on the side perhaps!).

FFI has started a new scheme of secondments where regional staff are invited to work at the HQ in Cambridge. This is a very important scheme as it provides that opportunity to understand the different perspectives within the organisation and its partners across the regions.

I am savouring the fish and chips and Marmite at the moment, missing my balut but having a better perspective of the different ‘culinary similarities’ across the FFI family.