Sea turtles are among the few species to have lived throughout the evolution and extinction of dinosaurs and have been swimming in our oceans for more than 100 million years. Today these ancient reptiles are widely recognised as flagship species, engaging a range of stakeholders in marine conservation initiatives.

Turtles play a crucial role in marine ecosystems, helping to maintain the health of sea grass beds and coral reefs. Furthermore, they are often culturally important to coastal communities and can provide substantial tourism value. However, despite their iconic status and importance to people and the marine environment, sea turtles are now at risk of extinction.

What species of turtle are FFI working with?

Alison (Nicaragua): Critically Endangered hawksbill turtles, leatherback turtles and Vulnerable olive ridley turtles. Our work is also of conservation benefit to Endangered green turtles, which nest on the focal beaches of the other three species. 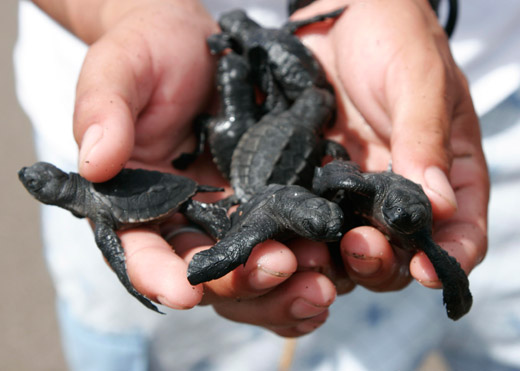 What are the current threats facing sea turtles?

Alison (Nicaragua): The most significant direct threat to marine turtles in the Eastern Pacific of Nicaragua is illegal harvesting and trade of turtle eggs and hawksbill shell (‘tortoiseshell’). Despite a national ban (instituted in 2005) and international treaties, demand for eggs and shell remains considerable and enforcement is weak.

Other significant threats include: incidental by-catch (in fishing nets or ‘J’ hooks), the ingestion of marine debris and other pollutants, and the degradation of coastal nesting habitats and marine foraging grounds.

Kate (Cambodia): Bottom trawling is a big threat to sea turtles as the trawls can be under the sea for several hours causing turtles to drown. Hook-and-line also catches turtles by accident as they are attracted to the squid bait meant for rays. A growing problem is plastic pollution as turtles mistake floating bags or other plastic items for jellyfish, which forms part of their diet.

Are these threats a global problem?

Alison (Nicaragua): Very similar to those found elsewhere. Hence we are engaged in efforts to coordinate conservation actions at a regional level, throughout the Eastern Pacific seaboard of the Americas.

Kate (Cambodia): The threats to sea turtles in Cambodia are similar to those seen in many other parts of the world; perhaps the most accelerated change is in the amount of plastic found in the water. 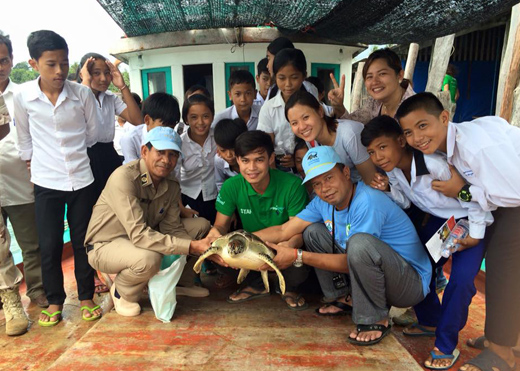 A green turtle is released from Koh Sdach Archipelago after being caught by a gill fishing net. Credit: FFI.

What role has FFI played in protecting sea turtles?

Alison (Nicaragua): FFI’s marine turtle conservation programme in Nicaragua is now in its second decade of operation (efforts began in 2002) and continues to be firmly anchored in strong community involvement. We use simple, effective strategies to patrol and protect nesting beaches, increase hatching success, and increase capacity for conservation. We develop local expertise and capacity (including protocols for protection, monitoring, egg handling and hatchery management), encourage local stakeholders to take a leadership role, and embed conservation actions within coastal communities.

Kate (Cambodia): We have been building partner capacity and understanding of sea turtles’ life cycle, and of the threats they face, implementing a safe handling and release programme, and developing Cambodia’s first National Plan of Action for sea turtles, which will provide a road map for enabling the recovery of the species.

Have there been any notable successes so far?

Alison (Nicaragua): Our monitoring efforts are providing evidence that, thanks to our conservation programme, a significant proportion of Nicaragua’s sea turtles and their nests are being protected, in places where otherwise 100% of these eggs would be poached. Whilst marine turtles are long-lived creatures and any change in status is unlikely to be measurable for years (decades) to come, we are compiling data that allows us to monitor this. We are starting to be able to project some trends, although these should be interpreted with caution.

Kate (Cambodia): Last year was a success in terms of collecting more detailed information on the distribution and threats to sea turtles in Cambodia, which has helped FFI make more targeted conservation interventions. Through our capacity building project with the Royal University of Phnom Penh, MSc student Sann Satya has joined our marine project to help estimate rates of by-catch and study changes in a known sea turtle hotspot. 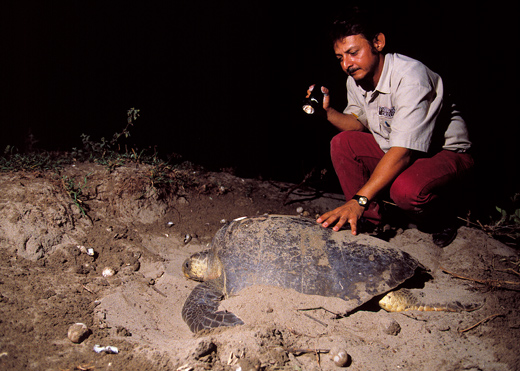 What have you learned that could be applied to other turtle conservation projects?

Alison (Nicaragua): We have some great examples of successful initiatives to generate pride in and support for turtles amongst coastal communities. For example, through annual turtle festivals held within coastal communities and the Hawksbill Cup, which is a friendly competition between our hawksbill project and our partner project in El Salvador (the second most important hawksbill nesting beach in the region).

Kate (Cambodia): Social media can be an excellent way to inform members of the wider public about conservation efforts. This year we hope to raise the profile of marine conservation in Cambodia by using flagship species such as sea turtles.