Conserving grey nurse sharks in Australia is a complicated business. Firstly, you have to take into account that the species is found on both the west and east coast of Australia and that it has two separate listings under the Australian Environmental Protection and Biodiversity Conservation Act 1999, with the east coast population listed as Critically Endangered and the west coast population recognised as Vulnerable. Both populations are also listed on the IUCN Red List of Threatened Species as Near Threatened (Western Australia) and Critically Endangered (eastern Australia). 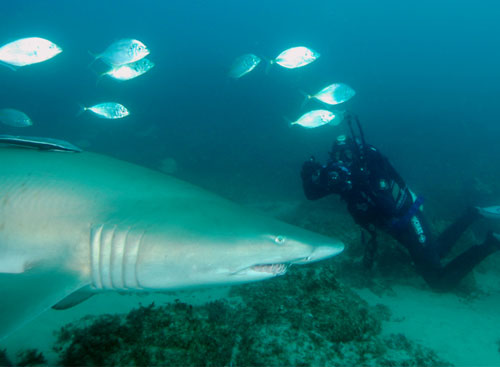 If status alone wasn’t complicated enough, the east coast population also migrates across the border between New South Wales and Queensland to breed and gestate, returning to New South Wales waters to pup.

Then there are the threats to this incredible species including the accidental (or illegal) capture by commercial and recreational fishers and from ‘shark control’ activities like beach meshing and drumlines for bather protection. Other potential threats include impacts from ecotourism, pollution and disease and ecosystem effects from habitat modification and climate change.

Whilst there has been an Australian Government Recovery Plan for the grey nurse shark (Carcharias taurus) in place since 2002, the document, which was supposed to be reviewed every five years, was only recently put out for public consultation with a corresponding lack of impetus (and funding) for actions under the Recovery Plan.

Numbers of east coast population of grey nurse sharks are estimated to be between 1,000 and 1,500 sharks. Whilst this is thought to have grown from initial population estimates of as few as 500 grey nurse sharks, it is not known whether this trend is currently increasing or decreasing. However, it is believed that the east coast population would need to increase to ~5,000 sharks before it could be considered sustainable. Knowledge of the Western Australian population also seems to be lacking and it is likely that this will need further investigation in the future. 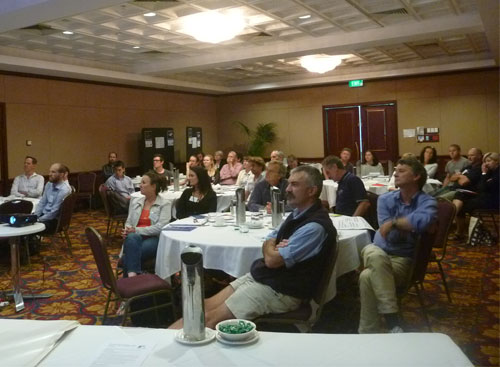 In the lead up to the event, the group developed and released a provocative “grey” discussion paper Grey nurse shark – working smarter to recover an Australian icon which was identified as the theme for the Symposium.

The result, 40 people from across all stakeholder groups participated in the day (a mixture of presentations and workshops) with representatives from the Commonwealth and State Governments (New South Wales and Queensland), researchers, advocacy organisations, dive and aquarium industries, community groups, recreational fishing and skindivers.

The participants acknowledged their differences, and agreed on the need to collaborate better if we are to secure the future of the species.

The group identified a number of initiatives that were needed to ensure progress against the Recovery Plan as well as the need to be able to monitor, evaluate and adapt future management interventions to ensure the best outcomes for the species.

The Symposium established a dialogue and way forward; the next step is to turn this alliance of partners into a positive set of actions in the future. It’s a great start.