Witness to a crime: getting to grips with the realities of wildlife conservation

Our first morning at Ol Pejeta Conservancy in Kenya and we’re heading out for an early morning game drive. We need to get cracking before it’s too warm for the wildlife.

My alarm went off at 6 am and, as I made my morning coffee, a plane circled nearby. Nothing unusual, there had been a number of small planes in the sky at Lewa, where we’d been prior to Ol Pejeta. They were usually delivering or collecting tourists so I thought nothing more of it. 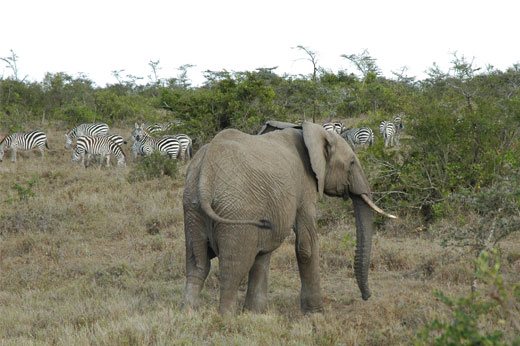 Ol Pejeta may be East Africa’s largest black rhino sanctuary, but elephant and zebra are a major highlight too. Credit: Paul White/FFI.

Jimmy, an experienced tracker, was joining us this morning to help us find lions. We’d seen some at Lewa, but talk of large prides rumbled through our group, making this a very exciting prospect. A number of lions at Ol Pejeta have been collared for ecological monitoring, and this allows a limited number of tourists to visit them from a respectful distance. 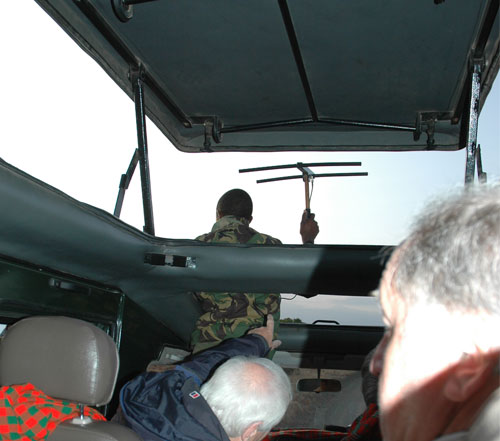 Jimmy, standing with the aerial tracking the faint signal of a nearby lion. Credit: Paul White/FFI.

We left the hotel’s compound and very quickly became aware of the number of rangers in the area, some armed, some with dogs. Their presence didn’t seem unusual to us, as our hotel was in the same compound as a security outpost, so rangers wandering about was quite a common sight.

We did remark on how good it was that the conservancy had such a robust ranger presence and how seriously they must take their security. Ol Pejeta is the largest black rhino sanctuary in East Africa, and with the additional drawcards of white rhinos and elephants, the conservancy is something of a target for poachers.

Our drive continued, and it seemed our luck was in; barely ten minutes in and Jimmy had picked up a faint signal. We followed the tracks that would take us closer to the signal’s origins.

A little way along, Jimmy had a radio conversation. It was in Swahili so none of us understood it, but shortly afterwards he told us we were no longer tracking these lions. He explained he wasn’t sure if we could get into the scrub where he thought the signal was coming from.

On the way back, a helicopter from Lewa had landed close to our hotel. Ol Pejeta and Lewa work closely together so staff from Lewa must be down all the time for meetings, we suspected.

We were joined for breakfast by Richard Vigne, CEO of Ol Pejeta, who had come to talk us through the relationship between FFI and Ol Pejeta and how the conservancy operates.

Someone commented on what an impressive security presence the conservancy had, which must help keep poaching at bay. It was at this point that we finally pieced it all together – the circling plane, the teams of rangers, the helicopter and the patrolling dogs weren’t routine activities. They were out because of an attempted poaching incident during the night.

Two individuals had entered the conservancy and shot a black rhino. It was a full moon – prime poaching time as it gives the best visibility – and the rangers had already received information to say a poaching was being planned so were on alert. However, the poacher knew his way around, and a female rhino was shot.

Understandably, she ran – undoubtedly terrified – and charged a ranger’s truck as she made her way to safety. Sadly this rhino had a calf, who became separated when mum ran. And as if the situation wasn’t bad enough, the calf ran directly into a pride of lions and was killed. This was the same pride, we learnt, that we’d been tracking that very morning. 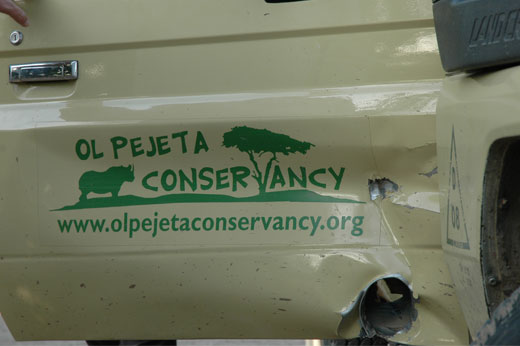 Undoubtedly terrified, the wounded rhino put her horn straight through the door of this ranger’s truck. Credit: Paul White/FFI.

We now began to understand the radio conversation that led us to give up on the tracking.

At this point no one knew where the mother rhino was or even the extent of her injuries. If it was a flesh wound then there was hope. If the bullet had hit bone then the outlook was not so good.

This is the reality of running a conservancy, and of working in conservation. It put into context all of the work that Richard talked to us about – the need to raise revenue through tourism, the cattle grazing, the community engagement and development, the 190 strong team of rangers and the anti-poaching dog unit.

We’d been in awe of the rhinos that we had seen over the past few days, in awe of all of the animals that we had seen in fact, and I suppose having spent a few days watching these magnificent creatures made it all the more heartbreaking to watch this story unfold before us.

It was important for us to understand the challenges that are faced by conservancies in Kenya, and the scale of the effort required to both deter poachers and tackle the incidents that take place. I guess there couldn’t have been a stronger message to my travelling companions as to why their support was so vital, and why it is needed now more than ever.

After breakfast we were off to visit some of Ol Pejeta’s most famous residents – the four northern white rhinos relocated from a Czech Zoo in 2010. Seeing the last four breeding animals from a subspecies such as this is sobering. The level of security surrounding their complex is both concerning and reassuring – large security gates, armed guards, perimeter guard towers and electric fences. Protecting these four individuals is not taken lightly.

We were met by Mohammed. He had worked with rhinos for years, and his enthusiasm for rhinos can only be appreciated through meeting him. He was well aware of the poaching incident, and he was angry about it. He felt betrayed; confounded as to why someone would harm these creatures. 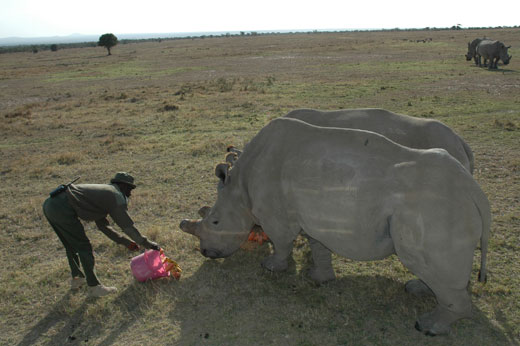 Mohammed had an extraordinary relationship with the northern white rhinos. Credit: Paul White/FFI.

Within the same complex as the northern white rhinos are the anti-poaching dogs: 14 animals highly trained to carry out a number of roles – from patrolling to assault – and each as effective as 70 human rangers. I was keen to meet one individual, Tarzan, famed for being more than a handful for even the most experienced handler. 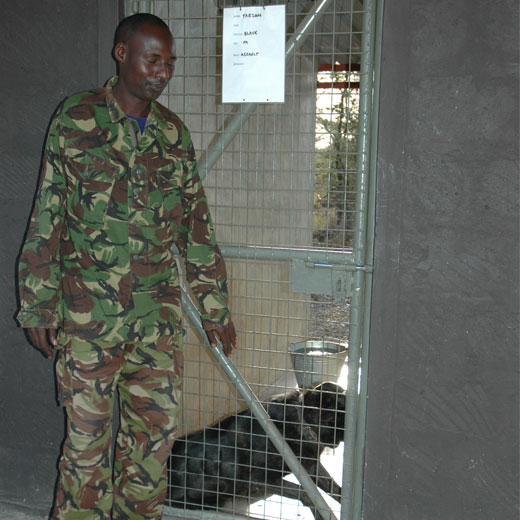 Tarzan barely had the energy to greet us, having tracked poachers for 17 km just hours before. Credit: Paul White/FFI.

We found Tarzan lying in his kennel, clearly exhausted, while the dogs in the other kennels positively bounced off the walls at the sight of us. Tarzan’s handler explained that he was tired because he had tracked the poachers for 17 km during the early hours, before losing the trail and becoming simply too exhausted to carry on.

In the space of only half a day we had seen the full cost of poaching – planes, helicopters, teams of rangers, anti-poaching dogs tracking the poachers and patrolling the site to deter any possible return. A huge-scale operation by any measure.

As we drove back to our hotel someone pointed out that the plane was no longer flying overhead – possibly it had landed to refuel, possibly they’d found the rhino.

That evening we learnt that the rhino had sadly died. The only small mercy was that the poachers didn’t recover the horn, and so it didn’t find its way into the trade. Together with her calf, that meant two rhino lost in one day.

When we took off from Heathrow on our way to Nairobi, we expected to see wildlife, we expected to garner some reassuring feeling that what we do to protect these species is working, and we expected to leave with a better understanding of what’s happening on the ground.

We didn’t expect to experience what we did; the reaction of the people who have taken responsibility for protecting them, and the extreme end of what’s happening on the ground.

But despite the challenges black rhino numbers continue to grow steadily at Ol Pejeta, with over 100 individuals living there today. Meanwhile, conservancies across the northern rangelands – many with support from FFI – are working to boost rhino numbers, providing bright spots on a dark horizon.

***
Ol Pejeta Conservancy and White Paw Training have teamed up to launch an online auction to raise funds for the Ol Pejeta Dog Unit and anti-poaching efforts at the conservancy. The auction features doodles and works of arts by well-known music artists, television personalities, actors, sports men and women. There’s only a week until the auction closes so take a look and place a bid now!