Why do we need World Lion Day?

Ros Aveling is Deputy Chief Executive of Fauna & Flora International. A primatologist and graduate of Bristol University, Ros spent her early career in Indonesia and central Africa developing conservation initiatives for the great apes – orang-utans, gorillas and chimpanzees. Working from conflict zones has led to her particular interest in sustaining conservation through cycles of conflict or natural disaster. She is involved with the governance of corporate partnerships including the Cambridge Conservation Initiative and the Ol Pejeta Conservancy in Kenya. Ros also contributes to technical panels such as the Whitley Awards and the British Government's Darwin Initiative and is an Honorary Conservation Fellow of the Zoological Society of London.

Cyclist Chris Froome collected several cuddly lions during the Tour de France this year. The toys are presented to the race leader at the end of each stage and, as he repeatedly kept hold of the leader’s yellow jersey, he accumulated a whole pride of them.

Meanwhile, back in Africa where Chris spent his childhood, the real lions are going in the other direction. The iconic African lion has declined from around 100,000 in the early 1990s to a mere 25,000-30,000 today, with numbers still plummeting. 10 August has been declared ‘World Lion Day’ to draw attention to their plight and attract support for organisations trying to reverse the decline. 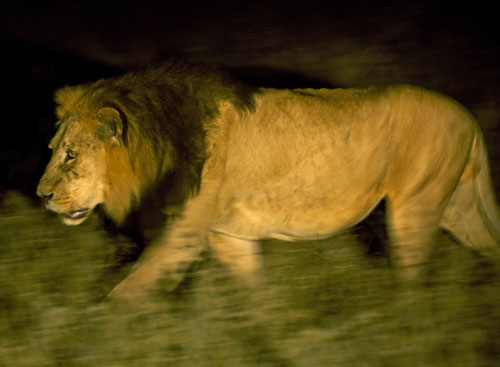 When our sons were small, Chris’ mother and I were both working in Nairobi and shared childcare. If we put our sons and their bikes in the back of the pick-up and drove out into the Rift Valley, we had the chance of finding lion tracks.

On calm nights back home, we would often hear lions roaring from nearby Nairobi National Park.

There are still lions in Nairobi’s park, but as they venture out they hit homesteads, and with a burgeoning, aspirational populace across the continent, the places where they can avoid persecution are diminishing dramatically.

There are points of light however. Kenyans are coming up with ways of reducing human-wildlife conflict without killing lions. Fourteen year-old Richard Turere hit the headlines recently, and became an acclaimed speaker at the TED talks, with his ‘lion lights’ invention.

His family and others living around Nairobi park would lose stock to lions at night; then he noticed that prowling lions would avoid stockades where torches were being used, and he rigged up a car battery and LED bulbs to simulate human watchmen.

It worked. The lions walked on by unmolested, and his family’s stock was secured. He kindly extended the system to all their neighbours too.

In more remote rangelands of Eastern Africa, young warriors of cattle-herding tribes used to prove their transition to manhood by killing a lion. A new tradition emerging is for this ‘warrior’ cohort to protect lions instead. World Lion Day is funnelling support to locally-based organisations that show how this can benefit predator and pastoralist alike.

Lion Guardians recruit young Maasai warriors to monitor the movement patterns of lions, find lost livestock, reinforce protective fencing and stop lion hunting. As this conflict mitigation is based on traditional techniques it is accepted by the community, and there is an economic gain as more livestock survive. 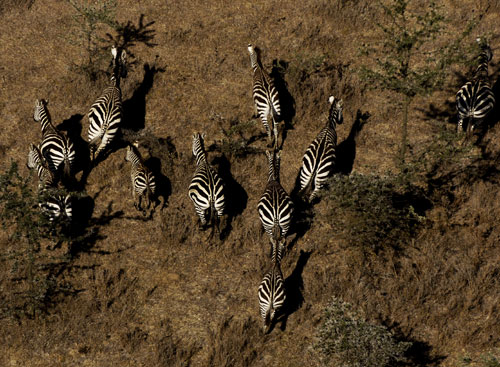 Where they can be protected, lions also do their bit for local and national economies. One of Fauna & Flora International’s (FFI) long-standing partners in Kenya, the Ol Pejeta Conservancy, is remarkably a haven for both lions and northern-adapted breeds of cattle, as well as a breeding ground for several endangered species. The 367 square kilometres of rangeland are managed for the wildlife and people of Kenya as an eco-business. With thoughtful management, wildlife has returned to this ex-cattle ranch and the lion population has grown over the past decade to approximately 70 individuals today.

With prey species also abundant, the lions are monitored carefully and can be tracked and seen by tourists, contributing to Ol Pejeta’s many awards (most recently the 2013 Trip Advisor Certificate of Excellence). Educational and community development initiatives further amplify these benefits, so the economic and social impact of the healthy lion population extends beyond those lucky enough to visit.

In Mozambique, lions are also beneficiaries of FFI’s work to establish extensive sanctuaries, such as the Chuilexi Conservancy, an ecological concession within the heart of the Niassa National Reserve in northern Mozambique.

A few years ago I stood with one of my sons in a remote part of Niassa Reserve, at the foot of a huge boulder almost suspended on a small outcrop overlooking apparently endless miombo woodlands. This is a sacred place and we felt the connection back hundreds of years to the humans who created the ochre art that still survives on the under-hang of this rock until today. 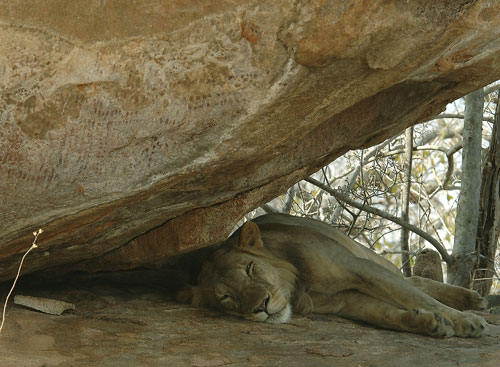 A lion rests under the shelter of a boulder. Credit: C M Begg.

Keith and Colleen Begg of the Niassa Carnivore Project, who study Niassa’s predators and coexistence with lions, had photographed lions resting in the comparative cool of that same sheltered vantage point.

We cannot be sure what those early hand paintings by ancient humans were meant to say to others who passed that way, nor how they were received. Perhaps they were a warning about the presence of lions.

In today’s networked world, when FFI vice-president Stephen Fry tweeted on 2 June 2013 to his 6 million followers around the globe, it was warning about the absence of lions.

Predator researchers are warning that we could lose lions in Africa within twenty years, even within ten to fifteen years if they continue to be lost at an unabated rate of five per day. Yet lions have infiltrated our culture globally, not only where people are directly trying to live in harmony with them.

When Tour de France leaders hold aloft toy lions as they don the yellow jersey in 20 years’ time, there is a chance that children of that time will have no idea what they represent; that there were real creatures called lions that roamed across two continents until humans drove them to extinction.

Yes, we do need a World Lion Day, perhaps even a World Lion Decade. We have that short time to turn this around and can start by supporting those at the sharp end of lion conservation in Africa. 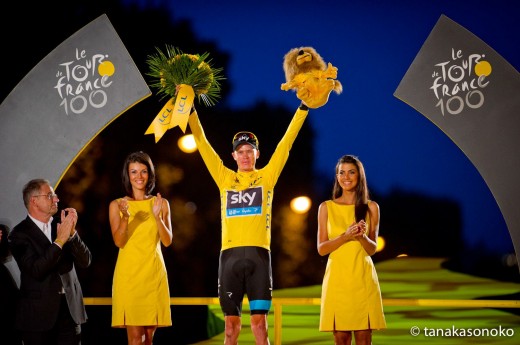 Chris Froome raises a lion toy in celebration of winning a stage of the Tour de France. Credit: Tanaka Sonoko.

Ros Aveling is Deputy Chief Executive of Fauna & Flora International. A primatologist and graduate of Bristol University, Ros spent her early career in Indonesia and central Africa developing conservation initiatives for the great apes – orang-utans, gorillas and chimpanzees. Working from conflict zones has led to her particular interest in sustaining conservation through cycles of conflict or natural disaster. She is involved with the governance of corporate partnerships including the Cambridge Conservation Initiative and the Ol Pejeta Conservancy in Kenya. Ros also contributes to technical panels such as the Whitley Awards and the British Government's Darwin Initiative and is an Honorary Conservation Fellow of the Zoological Society of London.