A recent press article about the loss of cave biodiversity in Vietnam has rekindled old memories, both positive and negative.

In 1995, early on in my time at the World Bank, I was visited by Professor Le Cong Kiet, a distinguished Vietnamese botanist, and Dr Louis Deharveng, a collembologist from the Paris Museum of Natural History. A collembologist is someone who specialises in springtails, little six-legged animals (less than 0.5 cm – see picture above) which used to be regarded as insects, but are now recognised as belonging to an entirely separate group.

They are characterised by a long appendage folded up against their lower abdomen which, when they feel threatened, is straightened at amazing speed, making the springtail fly through the air.

The reason for the scientists’ visit was their concern about the Hon Chong hills in Kien Giang Province, southern Vietnam (not far from the Cambodian border), which were being systematically destroyed by Morning Star Cement (which was later sold to the global cement company Holcim).

They had worked together in the area collecting plants, soil fauna and cave fauna and had found a large number of species which were new to science, which appeared to be confined to the hills, and which were severely threatened by the cement quarry.

Morning Star had been given a loan by the International Finance Corporation (IFC), the wing of the World Bank that provides loans to the private sector, and Kiet and Deharveng hoped that I might be able to intervene to determine whether the environmental impact assessment approved by the IFC had considered its unique biological features, and to get the hills some protection.

Of course, these animals did not have much in their favour being snails, millipedes, beetles, spiders, pseudo-scorpions, woodlice – and those springtails. Not a cuddly, loveable creature among them. But can one therefore ignore them?

Back in those days, the IFC was a very different organisation than the one we see today, which is now the leading financier in terms of its policies on biodiversity. But back then, when I asked to see their Environmental Impact Assessment and discuss the case, I was told (in effect) to go away. Louis Deharveng’s letters were shrugged off as being from a troublemaker.

This didn’t please me and I embarked with Louis on a path to try to get the cement industry to give appropriate attention to the science that shows how limestone areas, especially those with even small caves in isolated hills, predisposes them to having remarkable communities of highly range-restricted, and generally undescribed faunas.

These animals are often characterised by being blind (why bother when the cave is in utter darkness?) and colourless (nothing can see your pretty colours), and having long legs and other appendages (to feel for prey and predators). 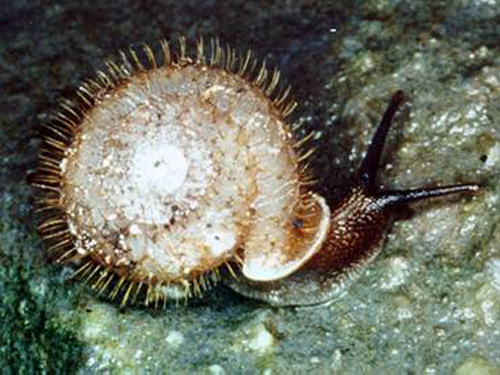 Hairy snail from the limestone hills of Vietnam.

My sympathetic World Bank manager supported my attempts to raise funds and we ended up convening a remarkable group of limestone specialists from around the world in Bangkok who came together through the efforts of IUCN Vietnam. The information imparted was developed into a World Bank book on the subject. (We also included cultural property but that’s another story).

I took this book on a road show around the world’s major cement companies – Cemex, Lafarge and Holcim in 1999-2004 and the World Business Council for Sustainable Development (see the presentation I gave) – and changed nothing. The Hon Chong hills continued to be destroyed.

Meanwhile, a workshop was held in 2008 in the capital of Kien Giang Province and a book was produced in Vietnam in 2009 by local and international colleagues (with Holcim’s participation) entitled Beleaguered Hills. Yet still the hills continued to be destroyed.

Jake Brunner who currently heads up the IUCN Mekong Programme from Hanoi is absolutely correct in saying in the press article mentioned above that “Holcim does not have a perfect environmental record but is an ‘island of excellence’ when compared to Vietnam’s state-owned cement companies.”

But this environmental excellence does not extend to the way the company currently deals with biodiversity. Despite its impacts on global biodiversity, there is no mention of the Hon Chong hills on their revamped biodiversity website, and the lack of publicity about this issue (until now) has led to it getting a star billing as a biodiversity-friendly company.

So, it was hardly surprising that I was intrigued to be contacted by Mike Ives of Associated Press who wanted to investigate the impacts of cement companies on biodiversity. The Hon Chong hills seem to represent an especially egregious (but by no means unique) example. He was intent on speaking to all sorts of people and I feel gave a balanced report.

But the beleaguered hills and their remarkable communities of limestone-restricted biodiversity continue to be destroyed.