Who knows whose nose? Training rangers to identify mountain gorillas

I was recently involved in some workshops for field training in ranger based monitoring (RBM) techniques and gorilla identification in the Volcanoes National Park. These workshops were attended by 55 people, including rangers from all patrol posts of the park and trackers from all habituated gorilla groups, as well as park managers and conservation partners involved in monitoring gorillas in the park.

One of the main observations that led to these workshops was that gorilla identification data collecting was the responsibility of the head tracker but when he/she was not around, other trackers who don’t have the skills to identify gorillas correctly were filling in the data. The Chief Park Warden spoke about monitoring activities and stressed their importance as a tool for ecosystem surveillance, so it was agreed we would proceed with field training so trackers and rangers could learn and apply these skills, with a performance evaluation to take place after one month.

I was amazed by park management’s resolutions to improve RBM data collection; and from this, we can expect professional trackers and rangers who can provide better quality RBM data, which ultimately will be crucial for species conservation, and I am happy that I will have contributed to it.

This is the famous group originating from the DRC side of the Virunga Massif. Early last year the group had leadership issues when the dominant silverback (Kwitonda) died, leaving two subordinate silverbacks (Karevuro and Kigoma) fighting to take the lead, with Karevuro finally victorious. Today, when I visited the group, it was calm. However, tracking the group was very difficult even for the experienced trackers as we had to distinguish gorilla, buffalo and elephant tracks and we had to stop several times to check very carefully the tracks.

The first day of the training consisted of providing practical skills about identifying gorillas, filling in gorilla datasheets and adding information about gorilla health monitoring and the use of GPS. I was happy that the tracking team I was working with has high learning ability. Two of the team members know to identify almost all gorillas and how to fill in datasheets and they will help the new one to get these skills acquired. I was able to see how Kungahara has grown up. Kungahara is an infant that was named by the former IGCP Interim Director, Dr. Augustin Basabose who is a good friend of mine and my mentor in my conservation career. I will be able to report to him how Kungahara is doing.

It was very sad to find in the group two snare victims. One is the silverback called Magumu who lost one hand and an adult female called Nyiramurema whose leg was amputated following an infection that occurred after being caught in snare. This shows how much we have to invest in supporting patrols to secure gorilla home range areas and cut down poaching activities in the whole park.

Today, we tracked one of the difficult gorilla groups who are known to move long distances with a daily path length reaching sometimes 2,500 m. It ranges in Sabyinyo mountain, one of my favorites in the whole mountain chain, with uneven terrain with many craters and sharp ravines making tracking this group difficult and dangerous given that you have to cross these ravines.

We tracked the group for two and a half hours. We first hiked Kabwende Hill and when we reached the top of it we realised the group had gone down into the bamboo zone. This is very common for this group as this is where bamboo shoots start to grow and they travel long distances to reach their favorite food.

When we reached the group, we started our training by checking and identifying each individual in the group, helping trackers to fill in gorilla datasheets. Amazingly I was able to record two juveniles playing with water. My first impression was that they were trying to drink the water or bathe in it but unfortunately they were only playing. Drinking water is a rare event in mountain gorillas, but more common in gorillas in Bwindi Impenetrable National Park (BINP). I thought I was going to be the one to record a video of such a special event.

This group is one of the scarier groups due to the dominant silverback, Guhonda being very protective! He has been known to charge at trackers and tourists when they make a mistake of approaching any individual gorilla in the group. I heard a story from one ranger that one day he jumped on a ranger and dragged him about 200 metres from the group.

He charged at us at one occasion and when we stopped to check on other gorillas, he stopped feeding and checked on us – ready to strike. 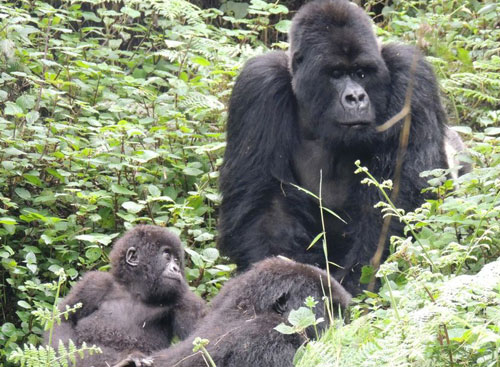 Guhonda the dominant silverback from the Sabyinyo group. Credit: IGCP

Checking this group was very difficult as many individuals were feeding and resting in trees. I was surprised to see a buffalo eating at the same feeding spot as the gorillas without any conflict, as in most cases the silverback would chase buffaloes approaching the group.

While other park staff are still visiting each gorilla group on Volcanoes National Park side, I moved across the border in Bwindi Impenetrable National Park (BINP) for a meeting with Department Chiefs (Monitoring & Research, Law Enforcement, Tourism and Community Conservation) and to train newly recruited rangers in RBM techniques.

Today, when I was heading to Uganda Wildlife Authority (UWA) offices in Buhoma early in the morning, I had a chance to meet a mountain monkey (Cercopithecus lhoesti) and took as many pictures as possible. The ones I met were not shy and I was reminded that one of our tasks through the RBM and protection programme is to make sure they are safe within their habitat. 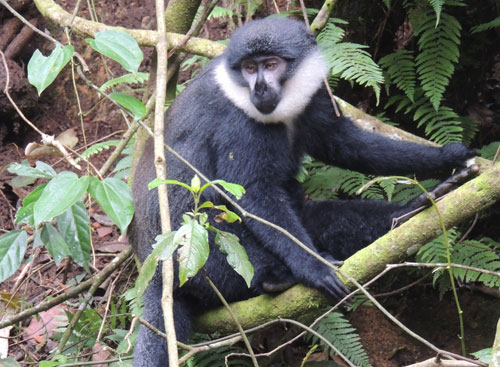 Today’s training was attended by newly recruited rangers. These rangers have been on paramilitary training in Murchison for almost five months. They have been trained on the ranger code of conduct, patrolling techniques and handling weapons as one of the tools they will be using in their daily work.

The training went well and all the presentations were interactive with rangers open and asking good questions.

One thing has impressed me. All rangers have completed secondary school and many of them are university graduates. Teaching them was so easy, to the point that I had also an opportunity to learn things from them. With a new strategy to recruit qualified staff in all parks, there is a hope that with capacity building, we will have professional rangers who will contribute to improving the RBM programme and other park operations.

Today’s training session was very practical, with a morning presentation about the use of a GPS which is an important and key tool in the RBM programme. I started with explaining about GPS technology, how it functions and how to use a GPS. Later, we went outside to practise. The rangers were great in this exercise – we finished what I had planned to teach them early and they requested me to teach them other GPS functions including navigating and orientation in the field using a GPS, a map and a compass. 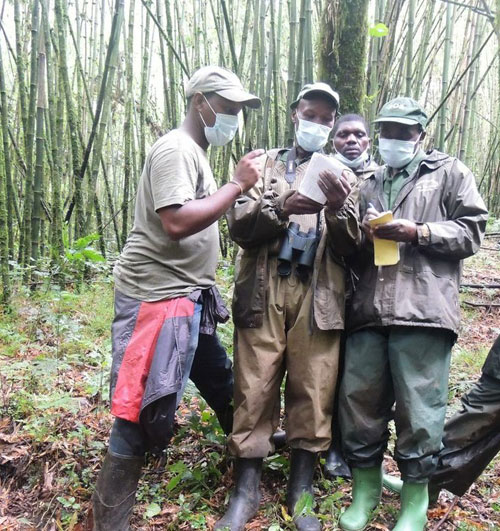 Learning how to use GPS units. Credit: IGCP

This training is part of a series planned in all four parks where mountain gorillas live.

The last session was the exercise on gorilla identification that I have developed and I facilitated. It  consists of grouping trackers according to the gorilla group they track and making them discuss and agree on the gorilla group composition (age/sex class) and try to  identify each of the individuals in the group using specific identification features of the individuals. In addition they give the name of each individual and the meaning of the name and highlight individuals that are not named and identified in the group.

This exercise was very fun and helped to increase the interest to trackers. The main objective of this exercise is to show them that they already have some observation skills that they don’t use but can do.

Today’s session was introduced by a presentation on the use of digital cameras and how to take high resolution pictures by my colleague Gessa Simplicious. This is a prerequisite skill in gorilla identification and updating the gorilla demography database. 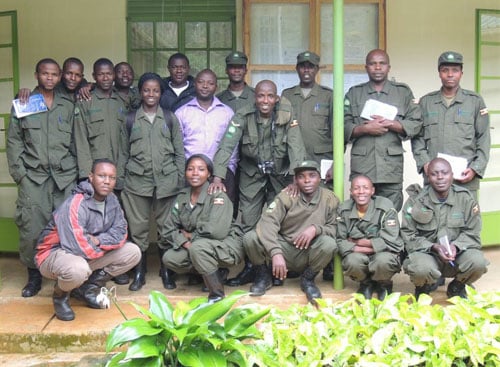 Smiles on the last day - armed and ready to go with new skills. Credit: IGCP

The second part of today’s session consisted of practical field work, where we visited the Rushegura group. Trackers were divided into small groups and requested to use the camera and binoculars to identify each gorilla encountered and write down the identification features that they had to share within the team and present to others.

This training was another successful event and according to trackers’ feedback, they were satisfied that they have gained enough skills in gorilla identification and promised to share with their colleagues who did not attend the training.

Personally, I am happy to be part of the team who is inspiring rangers and trackers to improve the RBM programme through building capacity of park staff using available resourced persons within the parks and partner organisations without relying on external expertise.