When patience pays off

David de Beer is an External Consultant to the Delegation of the European Union to Indonesia. He has been based in Aceh since March 2009 and monitors the implementation of the packet of EU-funded projects collectively known as Aceh Peace Process Support (APPS) with a special responsibility for trying to maximise areas of co-operation between the projects. One of these projects is Fauna & Flora International’s Livelihood Programme for Community Rangers.

Once a month I try to leave the capital city of Banda Aceh and travel to one of the twenty-three districts and municipalities that together make up Aceh Province, located on Sumatra, Indonesia. It was on my visit to Aceh Jaya district on the west coast that I first met the Fauna & Flora International (FFI) field team that is implementing a livelihood project whereby rangers earn basic income from economic activities in the community.

The Conservation Response Unit at Sampoiniet (founded by FFI together with its community and government partners high in the mountains of Aceh Jaya district) is the base of a group of community rangers who are part of this livelihood programme in a forest border area with a small rubber plantation nearby. The rangers, together with a team of trained elephants, help protect villagers from wild elephants coming out of the forests and damaging crops. 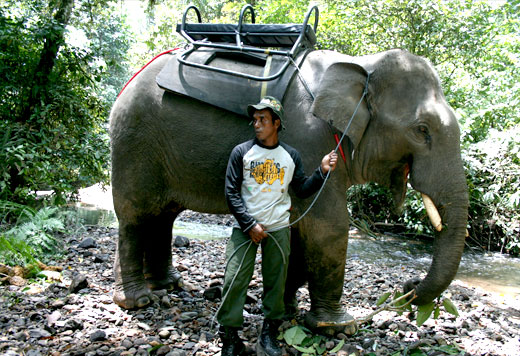 During my trip I went to observe a meeting between the FFI field team, three village chiefs and the leader of the mukim (an Acehnese administrative unit of several villages) of Sampoiniet that was to discuss the possibility of starting a livelihood project for the rangers based there.

I was impressed as I watched the FFI field team patiently and clearly explain to the village chiefs and the head of the mukim how they would benefit from the work of the community rangers and why it was important to provide livelihood support that would enable them to continue carrying out their tasks protecting villagers, forests and elephants.

The village chiefs were not convinced. They saw wild elephants as their enemies without any need of their protection. One clearly said he would rather poison the elephants that strayed from the forest onto village land. 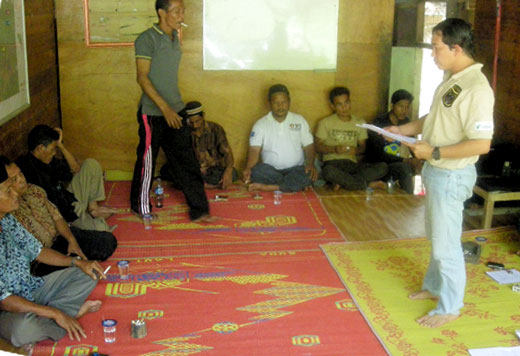 But the FFI team was not discouraged.

After extensive explanations from the FFI team, the local leaders agreed to come back for further discussions a few weeks later. The FFI team’s strategy was not to push the local leaders into a quick decision. In the meantime the community rangers would continue patrolling the forest border areas and be on call to come to the assistance of villagers when wild elephants emerged from the forests.

In February 2012 a group of 60 new community rangers (of whom six were women) ended weeks of harsh physical and theoretical training with a graduation ceremony in the Ulu Masen forest in Aceh Besar district.

For many it was an emotional experience, with tears flowing down hardened faces as the new recruits individually greeted their FFI trainers, their mentors and some government officials and donors. With the presentation of the uniforms, their new lives serving the community and the forest could begin.

It was here that one of the FFI field team was pleased to inform me that the patient approach of the team earlier with the mukim and village leaders in Sampoiniet had paid off; some months after the first meeting, the FFI rangers there had begun to co-operate with the local community in the development of a small rubber plantation. 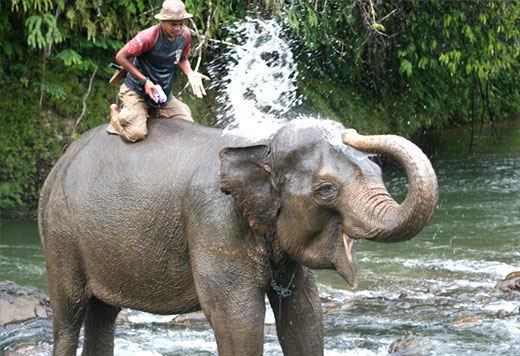 Another EU-funded APPS project, looking at police reform, is being implemented by the International Organisation for Migration (IOM) and has introduced community policing throughout Aceh.

Careful co-operation between FFI and IOM has resulted in the preparation of a training module on “Forest Crimes” for the Aceh Police. In this way, all police trainees in Aceh will receive training in what constitute forest crimes, particularly illegal logging.

The widespread implementation of community policing in Aceh will result in the policemen stationed in the villages being more aware of (and responsive to) the dangers that illegal logging, poaching etc. can pose to the community.

With the training module, FFI has helped mainstream forest crimes into the police training curriculum, thereby leaving a lasting legacy that will benefit future generations of police trainees and – through them – the communities they serve and the forests of Aceh that FFI is working to preserve.

David de Beer is an External Consultant to the Delegation of the European Union to Indonesia. He has been based in Aceh since March 2009 and monitors the implementation of the packet of EU-funded projects collectively known as Aceh Peace Process Support (APPS) with a special responsibility for trying to maximise areas of co-operation between the projects. One of these projects is Fauna & Flora International’s Livelihood Programme for Community Rangers.