Sihanoukville is so much bigger than I expected. I imagined a small village on the coast of Cambodia with tin roof huts and limited communication to the outside word. Instead, the tuk tuk took me though the bustling streets of a thriving port city southwest of the capital Phnom Penh. I’d arranged to meet Saran (Song Saa’s Community Engagement Officer) just outside the port, before catching the boat over to Sala Song Saa, Koh Rong Island, my home for the next 5 days in the village of Prek Svay.

Other than the sound of insect life and frogs, all is quiet my first night in the fishing village. I’m staying in a simple little room, thankful for the two windows that draw a slight breeze through my mosquito net. With no electricity and the air a cool 32 degrees, this is, quite literally, a breath of fresh air. It’s a simple wooden house with a couple of rooms, a classroom and sitting area and by the looks of my itinerary, will be the hub of my world this week.

The children took to snorkelling like fish to water. It was a privilege being wedged like a sardine as I guided my group around this beautiful reef. With storms the last two nights, the water was unexpectedly clear, and a depth of around 3 or 4 metres, meant the sunlight revealed a stunning variety of colour in the coral and fish. 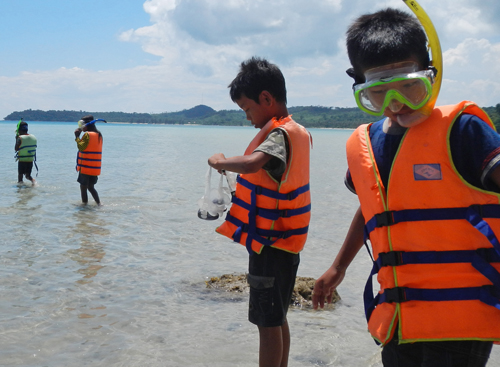 The Prek Svay Community Fisheries Committee, patrolling team and local fishermen met for their Education Workshop today. Once again, this consisted a movie show followed by an exercise in the classroom. It was then their turn for a trip out to the reef for snorkelling.

Their apprehension was palpable. We took them through the basics and waded into the warm waters. One of them took one look at the reef and broke into hysterics. Laughter doesn’t work under water. Laughter lines create waterways and you fill your mask! He couldn’t stop chuckling and it gave us all the giggles. 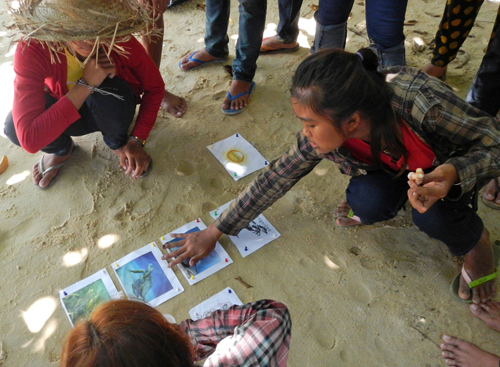 I spent the day drawing, sat around the back of one of the fishermen’s homes, along the river. Got quite an audience at one point and managed to disperse them by handing over my binoculars! It seems bins are pretty exciting, and the crowd spent the rest of the morning taking turns watching their neighbours, shouting back and forth across the river. One of the children joined me and sat silently concentrating as he produced a brightly coloured house and boat with crayons. 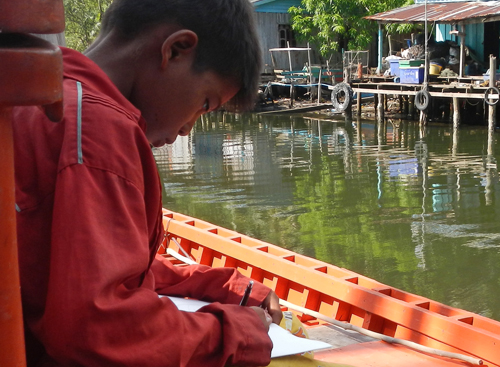 One of the jobs of the patrol team is to raise awareness among fishermen about marine protected areas, and about the proposed Marine Fisheries Management Area. Well designed and managed Marine Protected Areas are widely believed to be one of the most effective means for combating over-exploitation and degradation of marine habitats, improving the resilience of marine ecosystems and the coastal communities that depend on them. 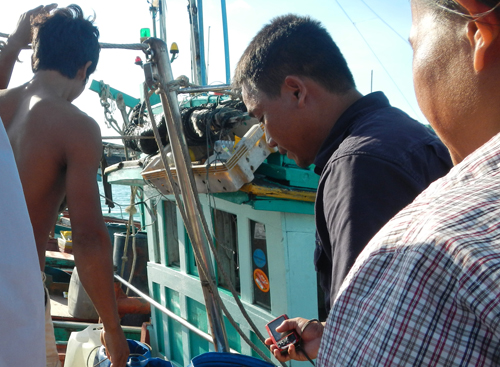 My final day with the Song Saa ‘Sea Turtles’ and some of the local fishermen donated squid, crab and dogfish from their night’s haul to provide us with something to draw. It didn’t take long to rearrange the room after class, with the large roll of paper shifted to the centre of the room.

I set the ball rolling with a large crayon dogfish and the children continued. Small drawings, large drawings, from line drawings to full colour. The room was a hive of activity for the rest of the morning as they looked in detail at the shape, colour and texture of the creatures before them. 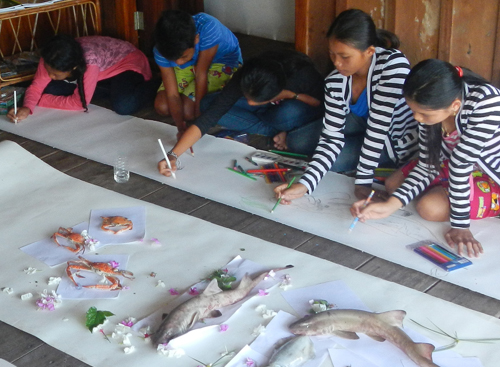 I arrive on the Song Saa Private Island resort, and while exploring the reef I swim into a swarm of jellyfish. After the initial panic of ‘oh this is going to hurt,’ it seems these guys don’t sting – thank goodness; still, it took my breath away for a moment. The sea is clear and the water is warm. The fishing village got me thinking about the structure of the restaurant near the reef. All the buildings are on stilts and have to feature in some way in the work I’m going to produce.

The submerged wooden legs of the boardwalk are covered in oyster shells. Further along, the sea bed shallows under the footings then slopes away beyond visibility. Large fish hunt between the pillars; a shoal spooks me coming from the depths. Some of the smaller fish pick at the structure, others flip and rub their sides. All scatter when the big boys pass and I don’t blame them either. It’s quite unnerving. 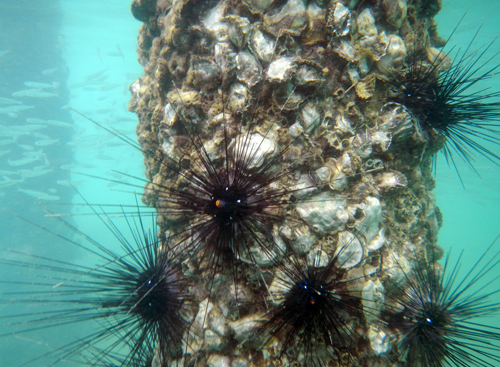 I have company today, a young couple staying on the Island want to go snorkelling so I’m going to tag along. I’m not very brave when it comes to exploring unknown waters when the visibility is only a couple of metres so it’s brilliant having the opportunity to circle the island confidently. I get far too distracted by squirrel fish. I think they are my favourites.

I catch a stripe of orange in the corner of my eye and there are the pair of long-beaked coral-fish from yesterday. It is so easy to watch them foraging amongst the coral, I could hang here all day but my fingers are getting very crinkly now! 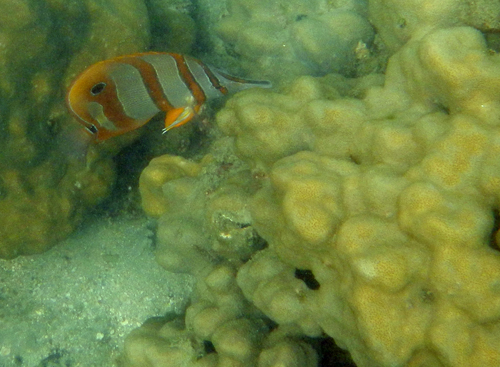 My last day on Song Saa and I’m to get a dive in! Jelena is taking the young couple I joined snorkelling yesterday out for a try-dive off Lonely Beach, on the northern shore of the island. It’s been ages since I’ve been out on a rib and quite a different experience jumping off it into warm water!

A perfect end to an amazing few days in a beautiful part of Cambodia. Thank you to all who made my stay pretty special. 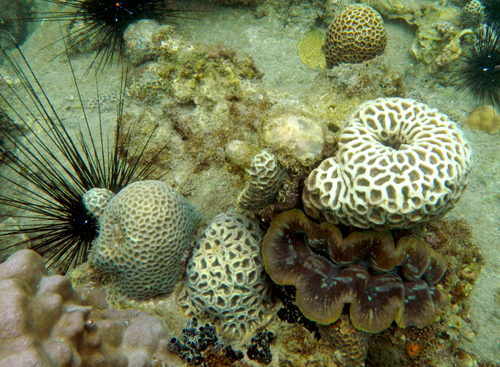