As the sun sinks over the dusty flatlands of Myanmar’s Kayin State, and a thread of emerging bats twists over the Salween River, the isolated spires, humps, and crags of karst limestone become flat as cut outs. Their blank greyness evokes gravestones, and the haunted silhouettes of ruined castles – death markers of something long past. And in a very real way they are. The limestone substance of these forms is a mineralised concretion composed of the fragmented skeletal remains of marine creatures – literally, a landscape of old bones.

One feature of limestone is its solubility. Rainwater dissolves the rock, eroding it into sharp, fluted peaks and creating a perforated landscape of sinkholes and caves known as karst.

Although these features may appear barren, especially in the desiccating heat of Myanmar’s dry season, they are beautifully analogous with the shallow tropical seabeds they once were. Like a coral reef the karst limestone habitat is teeming with specialist forms and endemic species. 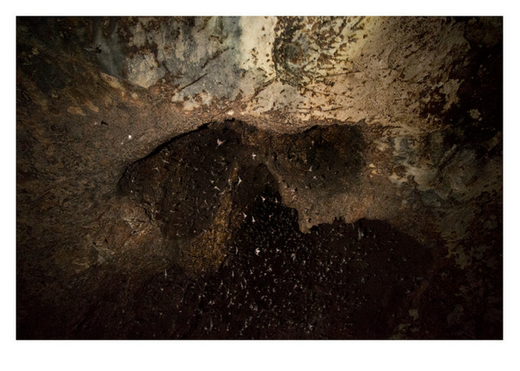 And this is one of the reasons Fauna & Flora International (FFI) is working to protect karst landscape areas across Southeast Asia. They are not only biodiversity hotspots, but also have an inherent potential to provide ecosystem and cultural services to local communities, who in turn have a motivation to help protect them.

The inhospitable nature of most karst landscapes has made them impossible to farm, and in heavily agricultural areas of Southeast Asia these inaccessible areas are the last places where undisturbed forests occur, providing a refuge for birds and primates that would otherwise have no habitat left.

The dark subterranean parts of karst are home to hosts of blind, pale species of invertebrates with tiny ranges, as well as to various species of bats some of which live in huge populations. In Myanmar, FFI has been looking at all these animals and has also focused on the benefits of guano collecting and how best to manage this in a sustainable manner. 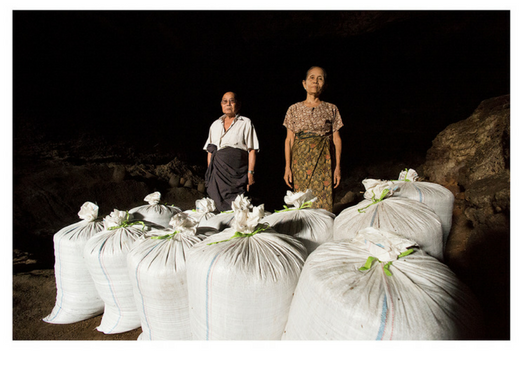 The high metabolic rate of insectivorous bats means they need to eat huge quantities of insects – many of them pests on nearby crops – each night and consequently produce copious amounts of guano (dung) which forms the basis for the cave ecosystem, with some beetles, millipedes and other animals dependent on this resource or the fungi growing on it. And herein lies the benefit for local farmers. Karst might not provide good land for farming, but the guano produced by the bats that live within the honeycomb of caves is a superlative fertiliser.

At the foot of a rounded limestone outcrop near Hpa An in Myanmar we watch the sun sink and a growing number of bats weaving their way down river in a corkscrew strand. Behind us is Linno Cave, from which the bats pour. An insectile static noise from the depths of the cave proves there are many bats still to emerge, and the deep musk of their urine-stink sits heavy in the air.

The local villagers tell me facts about the cave: there are four species of bat that occur in Linno. The overwhelming majority are the small wrinkle-lipped bats – some 400,000 in this cave alone. With a total of over half a million bats in this one small cave the potential for guano collection is significant. I learnt that the local villagers gather approximately 30 kg of guano per week.

I meet three village women the next morning preparing to enter the cave. They are at the cave mouth early, huddled around a bowl of liquid clay with which they coat their exposed skin before wrapping their hair in high turbans. These precautions protect them against the bat parasites that drop from the cave roof. Painted and turbaned, they look like priestesses as they make a small bow to a worn Buddha figure on the cave wall and enter the darkness. 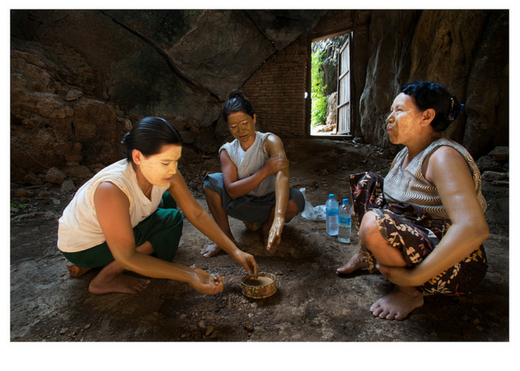 In many world mythologies and religions, including those of Buddhism, there is the notion of going down into the underworld to retrieve knowledge. In ancient Greece it was known as katabasis. I sense an element of this mythical descent into Hades as they disappear on their particular quest.

The air cools dramatically as we enter the cave and the bats, disturbed by our intrusion, wheel and bicker. A fine drizzle of urine falls and the acrid stench of ammonia is almost overpowering. We cross narrow log bridges made black and slippery by compacted guano. The women descend into a darkness that glitters with cockroaches and begin to sweep up the fresh guano that powders the rocks.

Without a coating of clay and a turban, my hair is soon damp with bat urine and I feel the steady crawling of parasites on my body. These rather grotesque insects are wingless flies of either the Nycteribiidae or Streblidae families that feed on the bats’ blood. They also bite humans, and I noticed the women’s arms were stippled with the feverish red wheals of old bites. 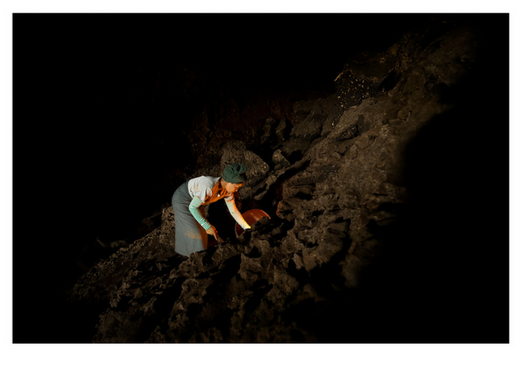 There was something hellish and overwhelming about the cave, the smell, the malign shower of parasites and waste products, the frantic white noise of panicked bats, the cockroaches, and the slippery unsteady ground that made me want to leave. The blazing light of the entrance beckoned like the indescribable beauty of a near death experience, and I gratefully stumbled out into the light, filthy and sweaty, but having succeeded in my own subterranean quest.

There is no doubt that guano collecting, at least in Linno Cave is hard unpleasant work. But it provides a welcome boost to the local economy and gives these bats a human value – which for people is always the first consideration – to add to their demonstrated value as insect pest controllers.

A few days later I visited the more airy and salubrious caves above the monastery of Taunggalay. In the complex beneath, a huge new building was under construction – paid for, the monks told me, by the revenue made from guano collection.

Clearly the bats provide a useful ecosystem service – consuming vast quantities of rice field pests – while producing a valuable commodity in the form of their dung. It seems a simple scenario: leave the bats alone and they and the guano collectors will both thrive. 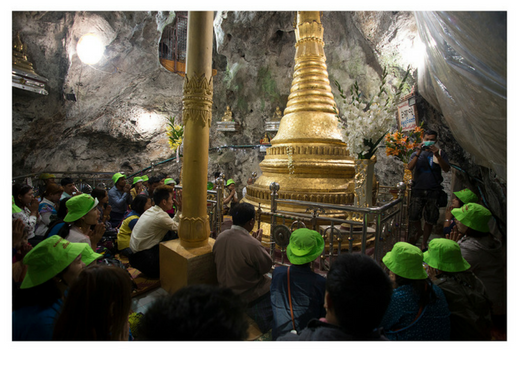 In more infernal places like Linno Cave this seems a possibility. But there are many other bat caves around Hpa An where ancient Buddhist art and sculpture draw an increasing number of Buddhist pilgrims and tourists. With human visitors come electric lights and increasing levels of disturbance. In nearby Saddar Cave bat numbers have decreased as human visitors have increased. This huge complex still has bats, but nothing to compare to tiny Linno Cave, to which public access is restricted. Other caves I was to visit, which had been almost completely developed for tourists and pilgrims, had been abandoned by all but a few bats whose daily guano output would scarcely fill a tea cup.

The cave ecosystems created by the bats are fragile; too much disturbance and they begin to unravel. In developing these sites a delicate balance needs to be achieved, allowing the caves to be visited by pilgrims and tourists, but in a way that allows the wild creatures to share them, too. Our job as conservationists is to ensure that this happens and FFI is pleased to have developed good relationships with a number of cave monastery communities with whom we have worked constructively on cave management plans, channeling tourists to less damaging parts of the cave, some of which are home not only to bats but to sets of remarkable invertebrates.