I’m getting excited because on 3rd January I will be setting sail again (on the same cruise as last time), from Sorong at the western tip of New Guinea island. But this time I’ll be joined by some generous Fauna & Flora International (FFI) donors and other guests.

I want to make the cruise as interesting as possible so I’m grabbing bits of time gathering materials together and trying to get ‘closer’ to the Wallace who died ten years after the foundation of the Society for the Preservation of the Wild Fauna of the Empire (which later became FFI).

For example, I have been to the University of Cambridge Zoology Museum. This is a wonderful resource for budding (and even elderly) zoologists.

It rarely has high profile exhibitions and doesn’t go in for buttons to make things move, light up or make a noise, but it does lay out specimens from all the planet’s animal life forms in an attractive and systematic manner. As with many other museums, behind the public galleries there are hard-working specialists at desks surrounded by cupboards and drawers of priceless specimens of rare (or even extinct) species, collected by the great names of zoology.

Among this museum’s treasures is the world’s most important collection of ladybirds and within that, there is a tray with (within a few centimetres of each other) ladybirds collected by Darwin, Wallace and Henry Bates – the man Wallace met by chance in Leicester Public Library and with whom plans for a collecting trip to the Brazilian Amazon were hatched.

Almost all of Wallace’s Amazon specimens were lost in a fire at sea, but it did nothing to daunt him, and he planned – without Bates – to sail the Malay Archipelago, a trip he later chronicled in his book of the same name.

Other treasures in the museum include some of Wallace’s birds, such as the extravagantly beautiful red bird of paradise, collected from the very forest on Waigeo where we watched them display in January. 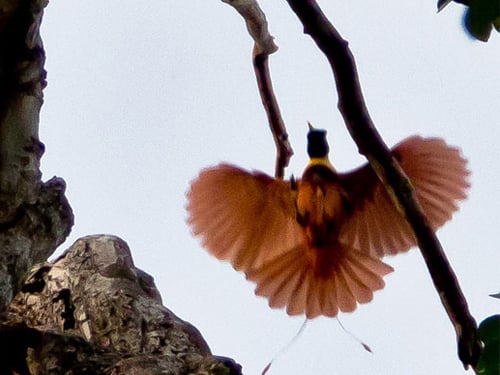 There is also one of his specimens of what became known as Wallace’s standardwing which we had also watched. The specimen had been purchased from Wallace’s son in 1950 and its label is stamped in red “TYPE”, indicating that this is the specimen that formally represents the species.

I was terribly excited, and I checked this out with George Beccaloni of the London Natural History Museum who knows more about Wallace than anyone else alive. He somewhat dampened my day by telling me that the genuine type is actually lost or not known. Even so, it was remarkable to know that I was handling the skins and birds that Wallace himself had handled. 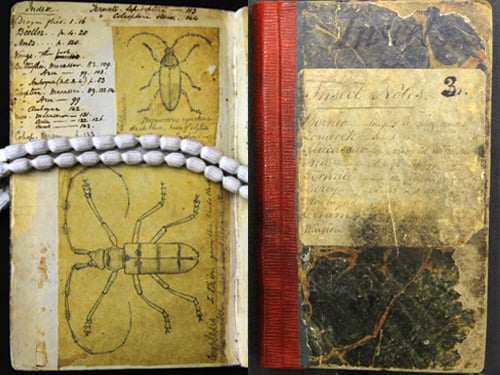 The inside and outside cover of one of Wallace’s specimen notebooks. This one focuses on insects, and the inside is adorned with a beautiful illustration of a longicorn beetle. Credit: Tony Whitten (© Natural History Museum, London).

I have also held and read Wallace’s field notebooks in the library of the Natural History Museum. In these he makes lists of what he collected, how much he sold them for, recounts short stories, and also makes fascinating lists of equipment and supplies – including considerable quantities of beer and Madiera wine (which were much safer than water). 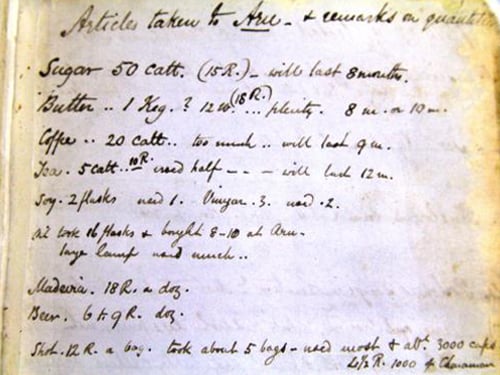 Wallace’s list of supplies taken to the Aru Islands south of New Guinea. These were as much for trade as for consumption, but I’m sure he kept the Madeira wine for himself. Credit: Tony Whitten (© Natural History Museum, London).

Any day now I’m going to receive scans and transcriptions of Wallace’s field diaries which are held in the Linnean Society in Piccadilly, London. It was in these diaries that he wrote down observations and ideas, and it was from these that he wrote The Malay Archipelago and a range of important papers and other books. 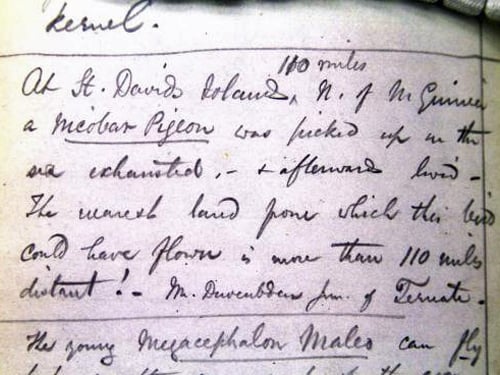 Earlier this year, I helped the BBC with contacts for a Wallace film to be shown in April. It is presented by musician/comedian/actor Bill Bailey, who is the Patron of the Wallace Fund.

I’m waiting to hear from the EU whether we have had success getting through the first stage of selection for a proposal with a German partner. The grant would help us to support local NGOs on the islands we will be visiting to monitor illegal logging and hunting, join law enforcement patrols, promote more sustainable livelihoods, and clarify tenure rights and forest status in order to facilitate community-based sustainable forest management.

A couple of weeks ago, a cabin for the November 2013 cruise (coinciding with the 100th anniversary of Wallace’s death) was auctioned at a fundraiser event for the Operation Wallacea Trust for which I am a trustee.

Meanwhile, I am getting help to source measuring tapes to be used for the measurement and monitoring of coral reef health as part of the global ReefCheck programme. 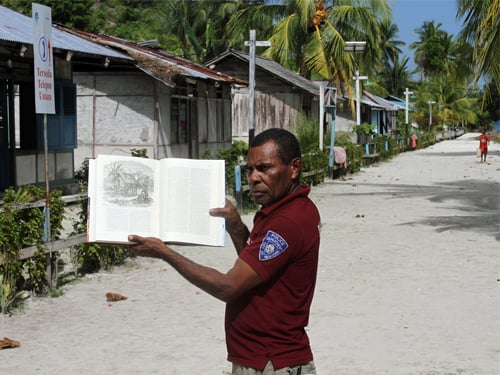 A village head holds up an illustration of Wallace’s hut in Yenbeser. Wallace’s book, The Malay Archipelago, also includes its measurements, which have been used for the reconstruction of the hut. Credit: Tony Whitten.

But possibly most exciting of all, and certainly the hardest to bring to fruition, has been helping to realise our idea of reconstructing Wallace’s hut in the village of Yenbeser. If all goes well then before the end of the year the new hut will be ready and I hope to have a photo of this to share before the end of January.

It won’t be long before I can start packing – I must remember to take some Madeira.