The unlikely story of the green peafowl

We all know that habitat loss is pushing many species to the brink of extinction, with the conversion of forests for agricultural use a particular problem.

While mega-farms converting hundreds of hectares for monocrops are a primary culprit,  new research shows that farmed land can, in the right setting, play an important role in supporting threatened forest wildlife.

Once common across Southeast Asia, the green peafowl has been a victim of land use change, as well as intense poaching. Classified on the IUCN Red List as Endangered, this spectacular bird is now absent entirely from much of its former range.

In an agricultural area of central Myanmar, however, the species continues to thrive – and scientists from Fauna & Flora International (FFI) alongside other research partners have now determined why.

Farming practices in Myanmar are changing as traditional subsistence methods are replaced by intensive agriculture techniques, driven by globalisation and a market economy. Despite this, the landscape in many parts of the country retains small fragments of forest, typically around monasteries and temples. These areas tend to be protected by the religious communities who live there and often harbour abundant wildlife populations.

One such fragment is found in the south of Shan State in the eastern part of the country, around the community of Pwe Hla village. Here a unique partnership between a community-run environmental group, Pwe Hla Environmental Conservation and Development – PHECAD, and the Buddhist monks of Nan Kone Buddha Monastery, has afforded protection to the green peafowl living in the surviving forest on the monastery’s grounds.  It was this area that provided the focus for this research.

Led by the Conservation Ecology Programme at King Mongkut’s University of Technology Thonburi (Thailand) and Friends of Wildlife (Myanmar) and assisted by Chester Zoo and FFI, the study set out to determine how the green peafowl responded to the existence of non-intensive subsistence agricultural areas in the close vicinity of its typical forest habitat. 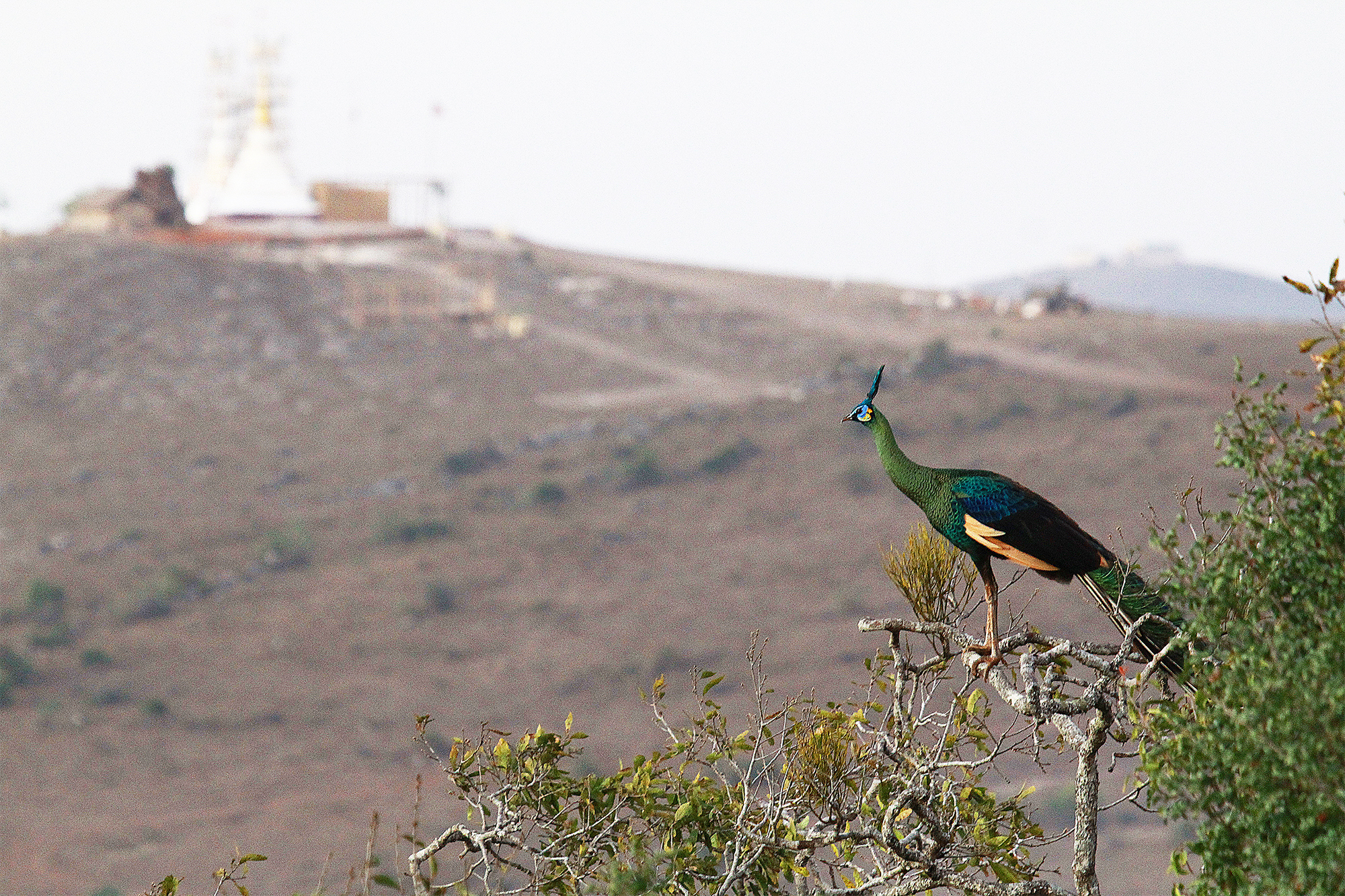 A green peafowl looks out from the edge of its forest habitat. Credit: Niti Sukumal

Over the course of a year, the authors determined that four distinct habitat types cover the peafowl’s range. Forest fragments dominated by pine and evergreen species are surrounded by areas of scrub, which consist of rocky ground and sparse vegetation. Alongside these are the areas of subsistence agriculture and then finally areas left fallow –uncultivated fields on which no crop is grown.

As might be expected, the researchers found that the green peafowl prefers forest to the surrounding habitat types, but this is not the full story. Peafowl observations outside of the forest fragments occurred largely within a 300m “buffer zone” near the forest edge. Of the three habitat types within this 300m range, cropland was significantly preferred over scrub and fallow, which came as something of a surprise.

Cropland does not offer any considerable cover to avoid predators, but it is home to the invertebrates that are so crucial for young galliform diets in the first six to eight weeks of life. The researchers determined therefore that the cropland was providing a reliable feeding ground for young birds and adults alike.

Unfortunately the benefit provided by this cropland is under threat from increased use of pesticides as agriculture intensifies in the area. To counter this, local environmental groups are working with the monks to encourage and support sustainable agricultural practices that ensure the cropland remains a sanctuary for the green peafowl.

The unusual story of the green peafowl in Myanmar shows how non-traditional or converted landscapes, when managed properly, can both feed humans and be an ally in the fight against species extinction.

More information on the research (The importance of isolated forest fragments and low intensity agriculture for the long-term conservation of the green peafowl Pavo muticus) is available in Oryx—The International Journal of Conservation.