Katie has more than twenty years experience in conservation, and is both a seasoned field practitioner and well-respected international conservationist. She assumed her leadership role for Fauna & Flora International (FFI) as Executive Director in the United States in 2003, and has substantially grown the constituency for the work of FFI globally, through a strategic focus on endangered species and habitat as flagships. Katie draws strongly from years spent living in Rwanda, where she was Director of the International Gorilla Conservation Programme (IGCP) following the civil war and genocide. Katie completed her Master's degree at the Yale School of Forestry and Environmental studies, and her BA at the University of Virginia, with a major in Environmental Studies and a minor in French. She currently serves as an Environmental Leadership Liaison with Rachel’s Network, and has enjoyed varied Board service with non-profit organisations. She lives in Washington, DC with her husband and two daughters.

In the fall of 2004, I invited José Urteaga to visit Washington, DC to speak to FFI board members about his work protecting sea turtles along Nicaragua’s Pacific coast. Rarely have I seen someone weave such magic around a board table – he spoke with such passion and expertise, we were inspired to actively garner support to him achieve his goals.

One year later I travelled to Nicaragua for the first time. I had extraordinary travel companions – Herbert (Beto) Bedolfe (Marisla Foundation), Anita Winsor-Edwards (William H. Donner Foundation and FFI board member) and Jonathan Fischer (then a supporter of our work, and soon to become an FFI board member). They were among the critical early US supporters to José’s work, and each has been with FFI, supporting José’s work, ever since.

This trip will forever be among my favorites; it was magical in so many ways. I will confess that the magic had very little to do with it being a particularly well-planned trip….I was just a few years into my role as FFI’s first US Executive Director. I have a field background (used to direct our work with mountain gorillas in Rwanda) but hadn’t yet visited José’s project area myself. I invited Beto, Anita and Jon based on a gut feeling that it would work, given the positive experience of having been transfixed by José the year prior in Washington. Indeed, we poured ourselves in José’s hands upon arrival, and those of Alison Gunn (a key member of FFI’s lean Americas team) and had the trip of a lifetime. Beto, Anita and Jon share their reflections below. I remain enormously grateful to them for their support, and for the shared special memories from this trip.

I have returned to Nicaragua five times since my first trip, and am actually there this very moment, as it happens. I am stunned by the progress and impact of this special team in their first ten years. It has become one of the Flagships we focus on from the US – and I simply could not feel more privileged to have this connection to them. Happy anniversary to José and his team! 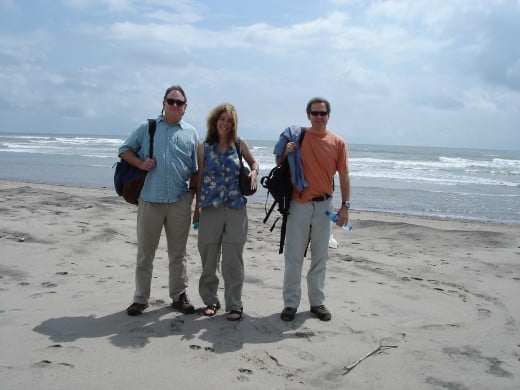 What an adventure! Several years ago I traveled to Nicaragua to see FFI’s sea turtle protection efforts on the Pacific coast. FFI has an incredible staff – professional, effective and fun so I was not surprised when I met José Urteaga and the FFI team for the first time in Managua. They embodied all of those qualities and more. With José as our guide we drove to Chacocente, fording streams and hoping to not get stuck in the mud. For the final leg of our journey we had to take a small boat to the National Park several miles up the coast. The storm surf made it difficult to even leave the shore but after being soaked by incoming waves we made it to the park in fine fashion. José clearly had a special relationship with the locals and the park rangers and it showed in the friendliness and hospitality awe were shown. That night was life highlight. As we walked the beach we saw hundreds of baby sea turtles hatching and crawling to the surf. Beautiful and wondrous, it gave us all hope that these marvelous creatures might survive after all. Unfortunately, getting to a result like this is just not that easy. Luckily, José has proven to be the right person to make an enormous impact. He is smart, strategic and personable and doesn’t let obstacles stop him in his work to save nature. It is enormously satisfying to know him and to see what the team has done in Nicaragua. José has made a huge difference and done it with hard work, style and good humor. Congrats to José and FFI on a great ten years! 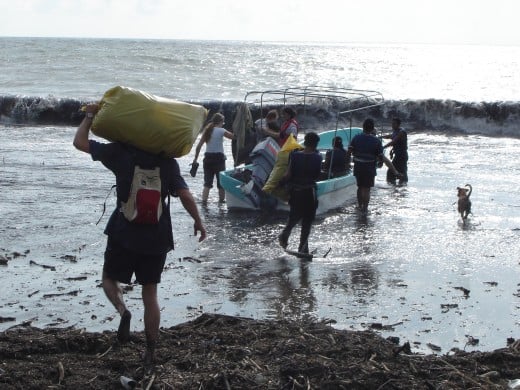 It is my pleasure to congratulate José and the FFI turtle programme on its 10 year anniversary. I will never forget the evening I spent on a moonlit Nicaraguan beach several years ago. Watching those baby turtles emerge from the sand and begin their life’s journey down that beach to the sea was one of the most wondrous and magical moments I have ever experienced. Also magnificent was to see the giant adults drag themselves up the beach to lay the eggs. It also struck me how fragile their life cycle is. It is inspiring to know that José is bringing his capability, passion, and creativity to this important conservation issue. It would be very easy to feel pessimistic when you see how easy it is to poach turtles eggs in an economically challenged country, but when I saw José and his team tackling this issue through education, public relations, technical assistance, collaboration with locals, other NGOs and international and government bodies, I came away with a renewed sense of hope. I know they are in good hands with José. Thank you for all the good work that you do. 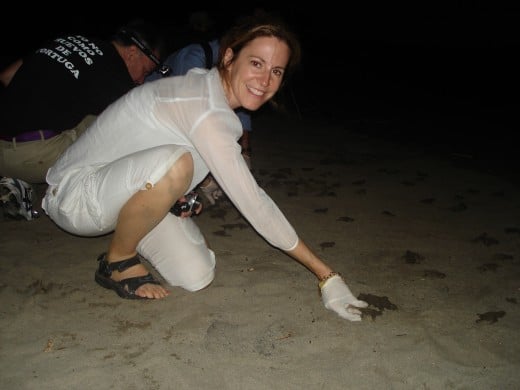 Congratulations to José and the entire team on the 10th year anniversary of Fauna & Flora International’s conservation efforts in Nicaragua! What great memories I have of the exciting adventure to Chacocente. Getting there was a bit of a challenge –  the washed out roads, the river that nearly swallowed our 4×4 and then of course the small fishing boat that ultimately delivered us to our destination. Thankfully, with friendly local support we did launch the small craft through the pounding surf. Nobody had a stitch of dry clothing by then, but everyone had a huge smile, and why not, the scenery was spectacular and the people delightful.

We were in good hands with José Urteaga, the young marine biologist with a fascination for sea turtles, who made the trip an unforgettable experience. It was immediately evident he had a great rapport with those living in the area, and we would soon learn he had a special gift for combining community with conservation. Situated on a remote strip of the Pacific Coast in a stunning locale, I remember the hatchery as a simple but impressive and very efficient operation, manned by several community members, some of whom had been poachers at another point in their lives. We learned from José that by providing another form of income for family bread winners and through an educational awareness program directed at youngsters, attitudes had begun to change, and many in the local community had now committed themselves to protecting the endangered sea turtles.

After a tour of the hatchery and a terrific dinner, we retired to our bungalows for a bit of rest. The highlight of our visit was only a few hours away… we were alerted that the time had come and we hustled out from behind our mosquito netting, grabbed our flashlights and scrambled in the middle of the night down a steep embankment to the magnificent beach at Chacocente. Awaiting us was a truly amazing site: many, many hatchlings scurrying haphazardly in a desperate attempt to find their way to the ocean. We were told that many fail in this attempt and to let nature take its course but I could not resist the impulse of giving a new friend a fighting chance. The tiny hatchling I focused on, no larger than the size of a half dollar, seemed not always sure what direction the water was in, but with a little help she did flap her way into her cold and dark Pacific home.  With all the natural predators awaiting her it was hard to imagine her surviving to adulthood and from what José told me, most of them do not. With the additional challenges man has posed survival can be insurmountable.

The following day was a sad one as we said good bye to some new friends and silently navigated our way back to the Pan American highway. Our trip ended too soon, but I am pleasantly reminded of it often, when I look at a piece of local pottery sitting on my kitchen table. It was a gift from José and team, a green bowl with two very content looking olive ridley turtles etched on it. What you have done for the local community and the magnificent gentle giants of Chacocente is truly inspiring, José!

Best wishes for another 10 years of success in Nicaragua, and I hope that some day you will be counting hatchlings from my little friend that I watched enter the ocean that evening. 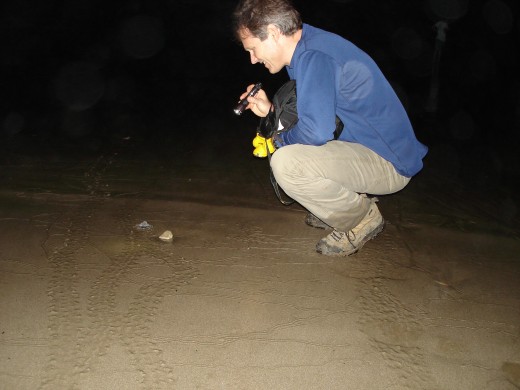 Katie has more than twenty years experience in conservation, and is both a seasoned field practitioner and well-respected international conservationist. She assumed her leadership role for Fauna & Flora International (FFI) as Executive Director in the United States in 2003, and has substantially grown the constituency for the work of FFI globally, through a strategic focus on endangered species and habitat as flagships. Katie draws strongly from years spent living in Rwanda, where she was Director of the International Gorilla Conservation Programme (IGCP) following the civil war and genocide. Katie completed her Master's degree at the Yale School of Forestry and Environmental studies, and her BA at the University of Virginia, with a major in Environmental Studies and a minor in French. She currently serves as an Environmental Leadership Liaison with Rachel’s Network, and has enjoyed varied Board service with non-profit organisations. She lives in Washington, DC with her husband and two daughters.