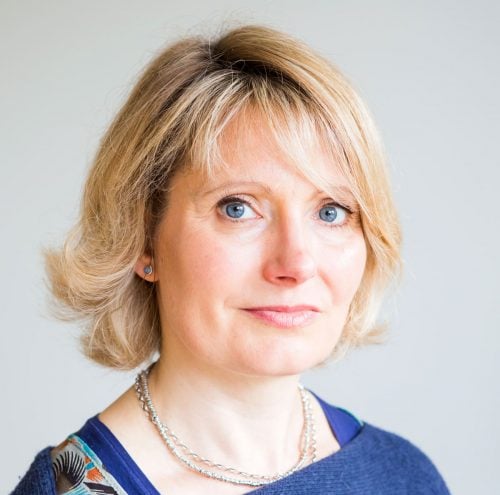 Last year one of our most generous and longest-standing donors – Arcadia, a charitable fund of Lisbet Rausing and Peter Baldwin – commissioned a review of the work it had funded through Fauna & Flora International (FFI). As the manager of one of the programmes that Arcadia supports I was at the forefront of this process, and wanted to share my reflections on the experience and what we have learned.

Arcadia’s relationship with FFI began in 1998, when Lisbet Rausing developed the idea for a fund that would secure highly threatened sites and protect them into perpetuity under local management. This fund is now known as Halcyon Land & Sea and has since supported 46 projects across 25 countries, protecting some 55.8 million hectares of critical habitat. Since 2012, Arcadia has also provided large-scale support to our marine programme, which has since grown to support 34 initiatives across 18 countries.

FFI has grown and flourished over the last two decades, and Arcadia’s long-term support has been vital to our success. Conservation takes time to realise results, in the region of 10-20 years compared with typical donor cycles of 3-5 years. The long-term partnership behind Halcyon Land & Sea has enabled us to persevere with projects and sites, however tricky, until they reach their full potential as well as investing in, and empowering, local organisations to manage these sites into the future. In addition, the flexibility built into Halcyon Land & Sea funding has allowed us to adapt, experiment and learn; this freedom to take risks has driven innovation.

An expert view from the outside

In April 2015, Arcadia commissioned an external review of the work it had funded through FFI. This decision was in line with an increasing trend towards external evaluation among the donor community – particularly in the US, where major foundations regularly use an independent third party to verify and advise them on the impact and effectiveness of their investments.

Nevertheless, this was a big deal for us – the review covered 18 years of Arcadia support to FFI, and would reveal whether its US$20 million+ of funding had been used effectively over that period. FFI is, of course, well used to evaluations; however, this review was of an entirely different scale, focusing on two of our most significant flagship programmes, and requiring a broader examination of FFI’s underlying way of working, ethos and psyche. Furthermore, any review or evaluation of this type is generally pretty intimidating; providing external consultants with access to your documents is a bit like allowing someone to rummage through your bedroom drawers! 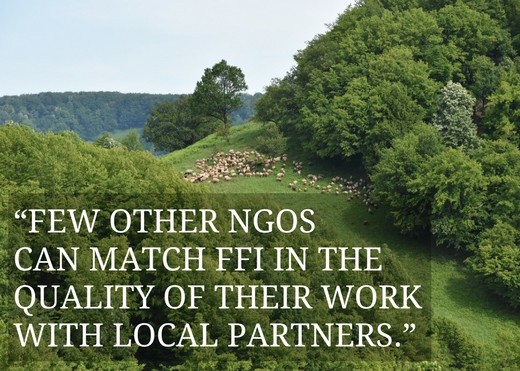 By September 2016 we had the results of the evaluators’ assessment.

Delving into the detail

In January 2016, the process began. The review team, headed by an experienced external evaluator, interrogated a sub-set of Arcadia-funded projects (not only those we considered successful, but – just as importantly – our most problematic or challenging projects as well), while also working to understand the wider operations and organisational style of FFI.

This involved site visits to see projects in action, desk reviews of reports and supporting documents and extensive interviews with FFI staff, partners and other organisations to get an effective 360-degree perspective of our work. Around 130 representatives of around 60 external organisations were consulted, along with some 35 FFI staff.

I had the chance to accompany one of the visits, and observe the evaluation of two Arcadia-funded initiatives in Romania. The project teams took us to a wide variety of field sites to demonstrate the different elements of the projects and to showcase local Romanian culture. The highlight of this visit for me, was finding fresh wolf footprints within Vorta forest – an area of woodland in the Carpathian foothills – and part of the Zarand Landscape Corridor – that the project helped to purchase, and which will be transferred into local ownership in due course. 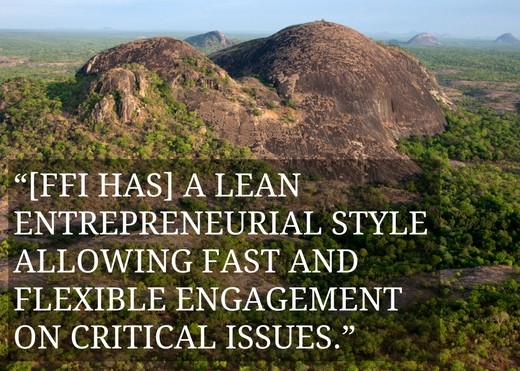 The report also reiterated our own internal perspectives of FFI’s unique role.

By September 2016 we had the results of the evaluators’ assessment, condensed into a 75 page report. Happily, this provided positive conclusions about FFI as an institution, about our achievements and, specifically, about our use of Arcadia funding and the success of the projects it had supported. The report also made useful suggestions about where we could improve our operations.

We were all delighted that the reviewers found FFI to be an effective organisation and that we had used Arcadia’s grants well. To quote the report: “Compared to what others are attempting and achieving in this field, and considering the opportunities and constraints faced, FFI has performed very well indeed.”

The evaluators were able to clearly articulate FFI’s role within the wider conservation movement, and celebrated the value of our relatively modest size, stating that we appeared to combine some of the best characteristics of being a big organisation with those of being small.

The report also reiterated our own internal perspectives of FFI’s unique role, which they articulated as “(i) collaboration through lasting partnerships, (ii) leadership through innovative models, and (iii) a lean entrepreneurial style allowing fast and flexible engagement on critical issues.” The evaluators particularly noted our commitment to, and persistence with, long-term engagements within our projects. 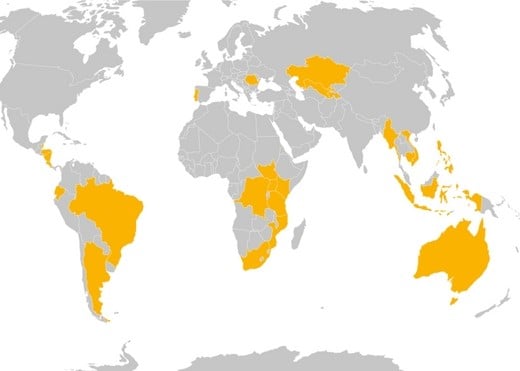 Since 1998 Halcyon Land & Sea has supported 46 projects across 25 countries.

The review makes some very clear statements about how FFI works with partner organisations, referring to FFI as “a genuine collaborator in these relationships, respecting their partners’ own goals even while pushing for progress, remaining in the background while their partners take credit for any gains, and recognising individual projects as components of longer-term relationships.”

“Playing such a role effectively has required considerable skill, judgement and sometimes patience and fortitude in a variety of different contexts, where FFI’s capacity to adapt its approach to local conditions has been critical,” it continued.

The report also stated that “few other NGOs can match FFI in the quality of their work with local partners.”

There is, of course, room for improvement. The evaluators made a number of recommendations about how we can improve our operations, including how we handle some of the risks inherent in the type of work we do, and around the ongoing challenge of making projects financially sustainable in the long term.

In all of this, Arcadia’s support has been crucial to success. The report clearly recognises the invaluable role that Arcadia has played in helping FFI evolve into the organisation it is today, by providing long-term and flexible funding for a considerable and effective body of work.

The review states that Arcadia’s trust “has been rewarded by the considerable care FFI has taken in using the funds and the impressive results obtained by both Halcyon Land & Sea and the marine programme.”

Arcadia is a charitable fund of Lisbet Rausing and Peter Baldwin. Link to the full review document is here.