We have just finished a month-long field survey in Sanjiangyuan National Nature Reserve, central China. We have been investigating the resident population of blue sheep – a key prey species for the Endangered snow leopard – and the effects of livestock grazing on this species.

Our field season had a very tight schedule, and we had just one month to cover eight sites from east to west, across the 363,000 km2 area, a core area for snow leopards in China. 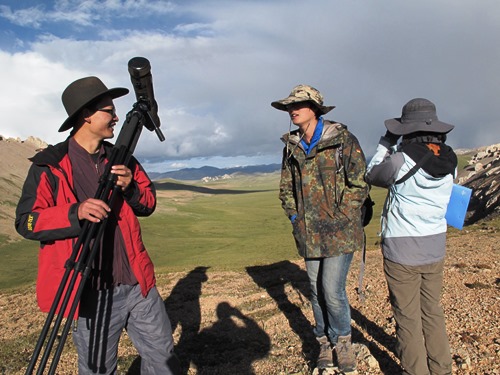 Although we encountered lots of unexpected events, we are lucky enough to finish the time and have collected 123 suspected snow leopard scats in total.

“You ate too much, that’s why the tyre on your side blows out.” Almost every few days, we suffered a flat tyre due to the bumpy road, and this is the classic joke we made to each other. On the worst occasion, we changed a tyre that had blown, only to wake up and find that that our vehicle now had two flats (including the one we had just replaced).

On the positive side, our snow leopard tracking skills grew day by day. For each site we had three transects to accomplish, so choosing the right route was crucial. The rule changes among sites. Sometimes you will find yourself sitting there, scratching your head, and trying to figure out why this “perfect” route is so empty. 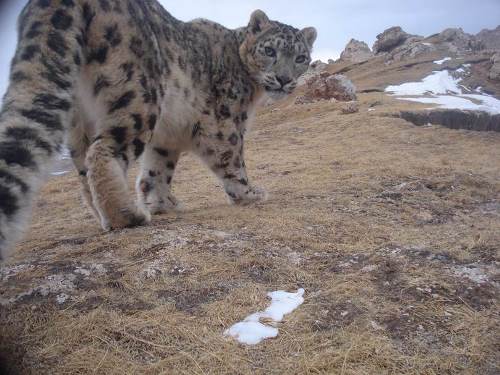 Your imagination has to be highly agile. Imagine you are a wild snow leopard, looking around and choosing a route to take – there are many different factors you will consider.

So the first beautiful (forgive me for calling it beautiful!), fresh, round, perfectly shaped snow leopard scat we encountered each day, was be the best present we could ask for. “Yes! This proves we are on the right track!”

With a little help from your friends

The local herders were very helpful. At every site we carried out interviews before we chose our three transects. These interviews always gave us the first picture of the wildlife distribution.

“The snow leopards always walk that way, from that mountain top over there, to the white rock you can see clearly from here, until they reach the west side of this slope. Don’t hike to the ridge, just follow the three big rocks, you will find some tracks there!” This example shows how detailed the information from a passionate herder can be.

Another day we ran into a lonely herder who hadn’t seen a single human being for a month. He begged us to stay overnight so that he could have someone to talk with. “I know exactly where the snow leopards are, I can collect the scats for you.” He wasn’t lying, two days later he gave us two scats with the snow leopard’s standard shape.

The most fantastic site we visited during the season is in Gande County, a monastery called Xiarihu.

The monks started to protect the blue sheep living on their pasture in the 1980s, when hunting was still very popular. From the 1990s the monastery even gave up their traditional food resource – domestic yaks and sheep – to leave all the pasture for blue sheep. They sold all their livestock and began to eat vegetables and milk bought from outside. 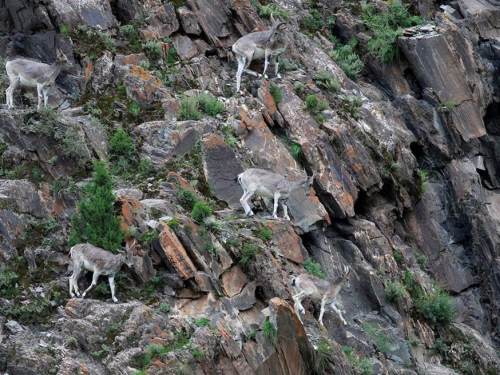 Now the blue sheep density has grown to an estimated to 1,000 sheep per km2 of pasture. As my colleague Yanlin described it, “It’s like a can full of blue sheep.”

They are as tame as domestic sheep. We can get as close as just one metre away – they are not afraid at all. This shows the dramatic difference that thirty years of conservation can make, and I think it can help to inspire all of us working in conservation.

You can learn more by visiting the Conservation Leadership Programme website.