The photo below is the first taken of a Tonkin snub-nosed monkey from Tung Vai, which is on the border of China in the north of Ha Giang province, Vietnam. I took it while conducting a survey to count the remaining members of this Critically Endangered animal, an animal so rare that its entire viable population has been counted by me and the Community Conservation Teams I work with. 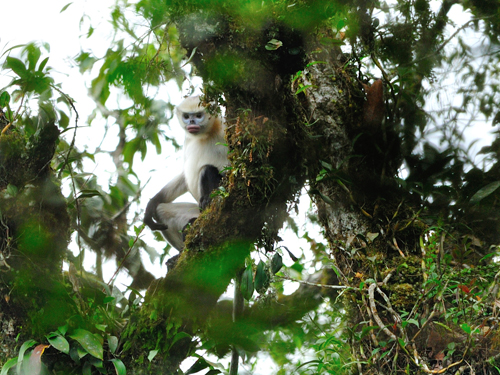 A rare sighting of a Tonkin snub-nosed monkey in Tung Vai, Vietnam, is captured on film. Credit: Nguyen Van Truong/FFI

On this particular trip we came across two new groups, containing up to five monkeys. They only showed themselves for around five seconds, and quickly disappeared into the canopy, but not before I managed to take this picture. This was completely different from our experience in Khau Ca Species Habitat Conservation Area, where we were fortunate enough to be able to conceal ourselves and observe them for several hours unnoticed.

This was an exciting achievement for me, as very few people in the world get to see a Tonkin snub-nosed monkey, let alone get a clear photo of one. Yet my excitement was somewhat dampened by other activity we saw that same day.

From dawn until dusk, the hills where the monkeys live roared with the sound of chainsaws felling trees. Illegal loggers are constantly taking trees out of this watershed forest, reducing habitat for the monkeys and other forest dwelling species in the area. My Community Conservation Team colleagues and I were able to confiscate a chainsaw from one such illegal logger, but it was one of dozens active in the forest that day.

At the same time, I clearly heard at least five gun shots while surveying over the seven days we were in the forest. Poachers take monkeys for food and traditional medicine, in addition to civets, birds and anything else that falls in their crosshairs. Illegal cardamom plots have also been planted among the undergrowth. The cultivation of cardamom thins out the undergrowth, killing saplings needed for forest regeneration, thus degrading the forest.

The Community Conservation Team rangers clearly have their work cut out for them.

This picture clearly shows the beauty of this mysterious creature. My colleagues and I will continue to do our best to ensure that it is there for our children and future generations.

FFI would like to thank FOTA wildlife park for providing support to our Community Conservation Teams.