Tiger Rescue – a life saved, yet lost to the wild

Unfortunately, in a park as big as this (5,600 sq miles not counting forests bordering the reserve) you aren’t always going to get there in time.

That means Tiger Protection & Conservation Units (TPCUs) also find sites where there is evidence an animal was snared and died even though the snare and its victim are long gone.

But sometimes, albeit very rarely, you do meet a snared animal that is still alive.  That was how we made the first record of a Sumatran muntjac in more than 80 years, an animal forgotten by science, alive in a poachers snare.

It was releasing that deer – and believe me, a miffed muntjac is not to be messed with – that made us realise it was imperative to get the tiger team trained up to deal with such snare emergencies. Sooner or later, I guessed, we would meet something more formidable than a muntjac.

Our first training was back in 2003. But training for a wildlife emergency such as a snared tiger, without the tools to do the job when it happens – and it will happen – is not entirely helpful.

So the blessed Giles of Australia Zoo stepped into the void with blow pipes and a veritable arsenal of veterinary drugs and anesthetics. And more training.

The team learned how to make blow pipes (items that have a tendency to be in the wrong province when needed and believe me, when you need a blowpipe, you need it now), how to dart animals correctly and safely, how to act as veterinary auxiliaries and to take crucial decisions that, if skewed, could have, at very best, unfortunate consequences for animal or rescue team. Or both.

Since then we put the training into action in the field, leading or providing technical support for the rescue and evacuation of Sumatran tigers caught in poachers’ snares – in one case – a Dutch colonial period gin trap.

In each of those cases, the basic facts were known before the team ever left base camp.

February was different. In every way. It started with a ‘snare sweep’ – a forest patrol specifically launched to search for and disarm suspected active snares with two TPCUs dividing up an area of more than 40,000ha in the west of the National Park.

One unit returned to base after a week in the forest with a ‘situation safe’ report: no signs of human presence, no threat detected, tigers in all the right places.

Not so with Seven X’s* team. On his unit’s sixth day in the forest, as they turned to move towards home, they spotted and began to follow signs of human presence. Soon they met the first active tiger snare, then a snare which had caught a Malay sun bear. It was dead. Then another active tiger snare.

And then they met the tigress who would subsequently be given the name of ‘Dara’. A day or so earlier Dara had been moving down a ridge trail above the Tembilun river in forest just outside the national park. She was alive. But her right forefoot was caught in a wire cable snare, purpose-built for a tiger. Her foot was a mess.

It took X the better part of two hours of searching hilltops for a signal so he could report to base. By then it was getting dark. Some 60km to the south-west, Nurhamidi, the team’s Bengkulu coordinator started … coordinating, most importantly with Yanti, our favourite wildlife vet, a Bengkulu Nature Conservation Unit (KSDA) officer whose main job is to look after Sumatran elephants at the PLG sanctuary, but who is now well used to urgent phone calls from the tiger team.

Andi, the team’s Bengkulu administrator shopped like a WAG, but more practically. The key ingredients of forest life, coffee, sugar, rice, paraffin, instant noodles, tinned fish, chili paste (this is Sumatra) and (because this is Sumatra), kretek or clove cigarettes. It would take almost two days to walk in to the location and nobody knew how many more before they would be out.

In the forest, X and his team could only keep watch. And find and destroy more active snares. One down. Don’t let another tiger (and yes, there was another tiger in the area) go the same way.

As pak Nur and Dr Yanti and their team made their way to the location, Bayumi the team’s administrator was… administrating … calling other patrol teams out of the forest and setting up a roster to ferry supplies in to the site and clear a trail out to a dirt road head for the subsequent evacuation.

In the forest, the rescue team met up with the TPCU that had found the snared tigress. Dara was anaesthetised using a blowpipe and, once ‘out’, put on a drip while Dr Yanti made initial emergency repairs to the badly-injured snared forelimb while TPCU members monitored the tigress’ body temperature and respiration. 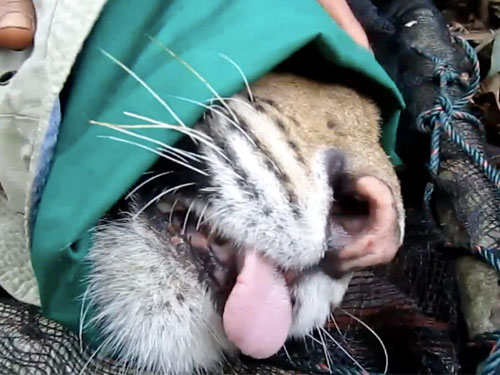 Meanwhile an emergency camp was established 2km downriver and a temporary (the boys fervently hoped very temporary) cage built from forest saplings for the patient and the tigress stretchered to the new camp and placed in her temporary quarters.

Over the next days Yanti anaesthetised Dara on two more occasions to cleanse the snare injured foot and to amputate toes irreparably injured by the wire cable snare. A “light weight’’ tiger transport box was loaned and, air-freighted from Bogor to Bengkulu (thank you, pak Tony Sumampau.)

My old mate Pak Amon, now director of KSDA Bengkulu (and Yanti’s boss) and I tried, and failed, miserably, to “borrow’’ a helicopter from a famous tiger-loving industrialist to ease the subsequent evacuation (try carrying a 70kg + tigress inside a 50kg++ carrying box for 10+km through hilly lowland tropical rain forest).

In the forest, Dara was under 24-hour watch (not least due to the fragility of her quarters) and to take her mind off her mutilated feet in addition to chickens, snacks of freshly-caught river fish were given, anything to distract her from her injured feet (now minus a total of five toes). A mosquito net was ordered so that flies could not disturb her. 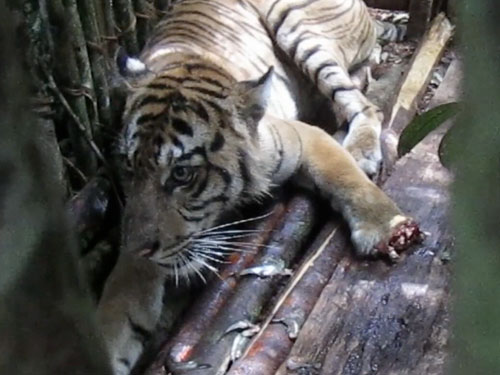 And finally everything was ready and in place. Dara was anaesthetised again** and stretchered to the nearest old logging road, sprayed frequently with water to keep her body temperature normal, met up with the KSDA team and the transport crate and transported out of the forest. She will never roam freely the forest as a wild tiger again.

For reasons I prefer not to go into (to do with buttons, ‘nuf said), I was expelled from the Brownies. I think I would have done better if I had been allowed to join the Scouts. That Baden Powell bloke was entirely correct.  Be Prepared. We were. Nice job team.

*Seven X is indeed his name, he is prepared only to say that it was a misunderstanding between the Registrar of Births and his father.

** Umm, anybody got any ketamine?, We are now low on ketamine!! Be preparrrred!