Tiger encounter – Face to face with the king of the jungle 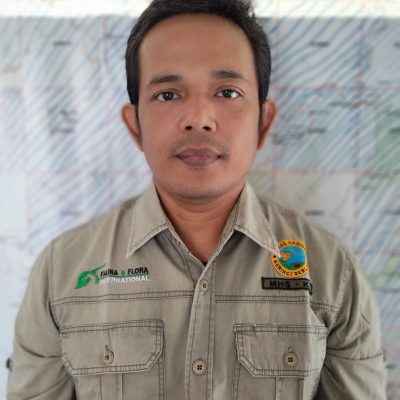 Luri has more than 10 years experience in field activities for tiger conservation in Kerinci Seblat, including conducting camera trap and occupancy surveys. Since 2016, he has officially led FFI’s Kerinci Seblat SMART monitoring, in collaboration with the national park and other partners.

Sumatra’s Kerinci Seblat National Park is one of the most important areas in the world for wild tiger conservation. Working in partnership with the national park, Fauna & Flora International (FFI) monitors Sumatran tigers to understand how the park’s population is faring. Camera traps are vital tools for this monitoring and have been used since 2005 to record wild tigers. After a break in 2019, when the tiger monitoring teams conducted park-wide surveys – which recorded an increase in tiger occupancy – camera trapping resumed in 2020, with 98 camera stations planned across a core area of the national park.

The Covid-19 outbreak temporarily halted camera trapping activities, but the teams were eager to return to the forest once it was safe to do so. After a detailed technical briefing and with field logistics and consumables prepared, the four teams, each responsible for setting camera traps in different sections of the core area, headed back into the forest.

I did not know that I was about to lead one of the five-strong teams on an expedition I would never forget.

8th June 2020: All the monitoring teams left base camp in Sungai Penuh, Jambi Province, for our respective camera trapping areas. Our drop-off point was an orange farm, from which it would be a two-hour walk to Camp I, across farmland directly bordering the national park forests.

9th June: Early in the morning, we set off and entered the forest. As always, there was lots of joking and playing around, even though the route was not always easy, sometimes climbing or descending very steeply. After fording a swift-flowing river, we then set up two camera trap stations and proceeded on to the site for Camp II.

10th June: An uneventful day – so far as any day can be uneventful in the forest of Kerinci Seblat – as we moved on from Camp II, setting up camera traps in pre-planned locations and documenting evidence of tigers and other wildlife present along the route until, in the early evening, we reached what would be Camp III. 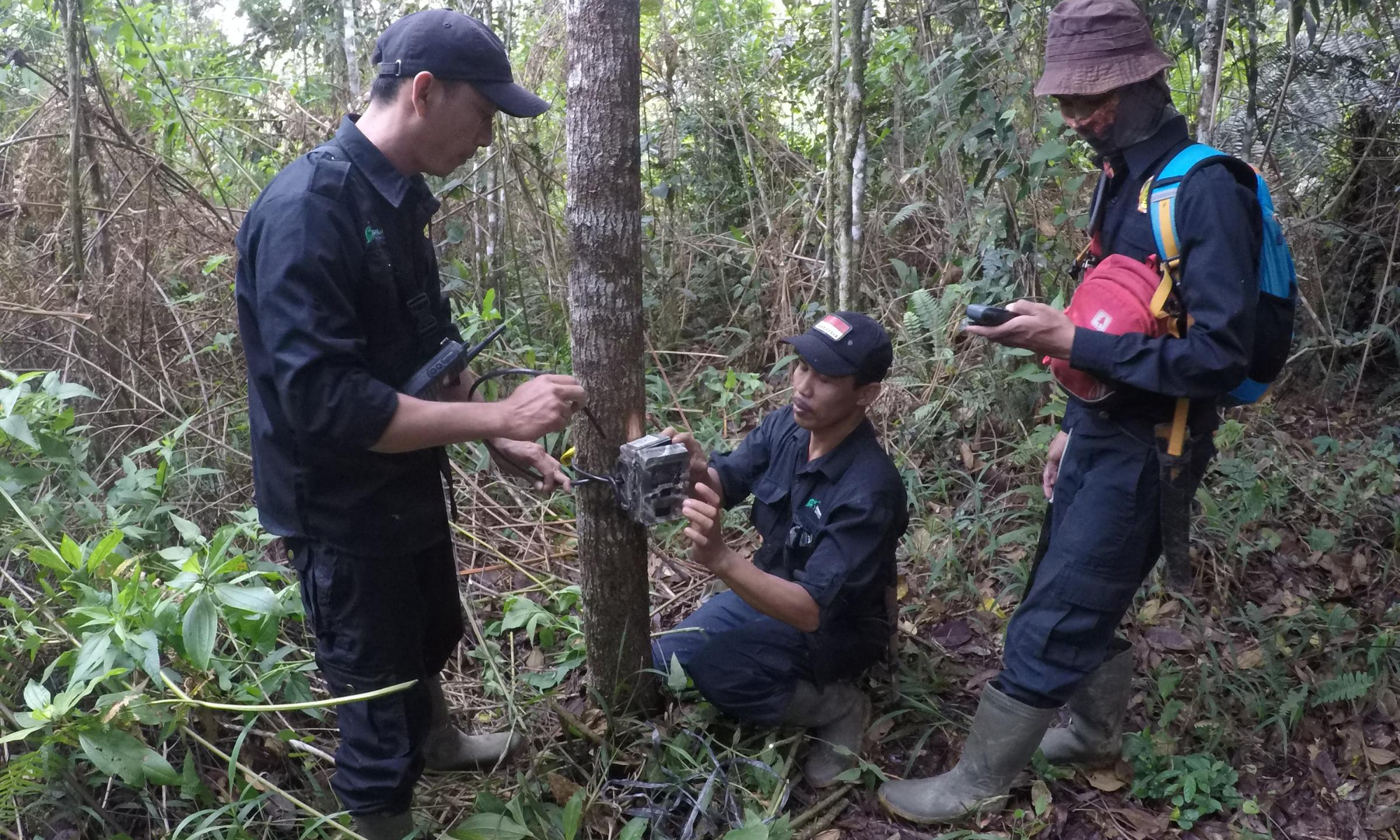 11th June: Today was not an uneventful, usual-sort-of day in the forest. Not at all. Things started normally – after a day of setting up camera traps, we reached our planned Camp IV and prepared for a well-deserved rest and supper. Then, at 5.30 pm, the expedition took an unexpected turn.

One of the team saw a Sumatran tiger, no more than five metres from where he was standing. The tiger was crouching down and watching him intently. Perhaps realising it had been spotted, the tiger then swiftly turned around and retreated behind a tree. The team member who saw the tiger raced back to camp – only around 20 metres away – shouting “Tiger! Tiger!” We discussed what he had seen and how close it was from where we were sitting, then cautiously left camp and headed to where the tiger had been seen. Its pugmarks were very clearly visible in the moist forest soil. We checked the tiger was no longer in the area and then, finally, retreated back to camp.

7.30 pm: We had finished supper and were relaxing over cups of hot coffee when the team member who had seen the tiger earlier got up to answer a ‘call of nature.’ We all told him to stay close to camp. He had only moved a few steps when he let out a loud yell and then raced back to the shelter.  We stood up and pointed torches into the darkness and there, very clearly, we saw the tiger strolling past. Caught in the torchlight, the tiger froze, then turned around and leapt in the undergrowth. 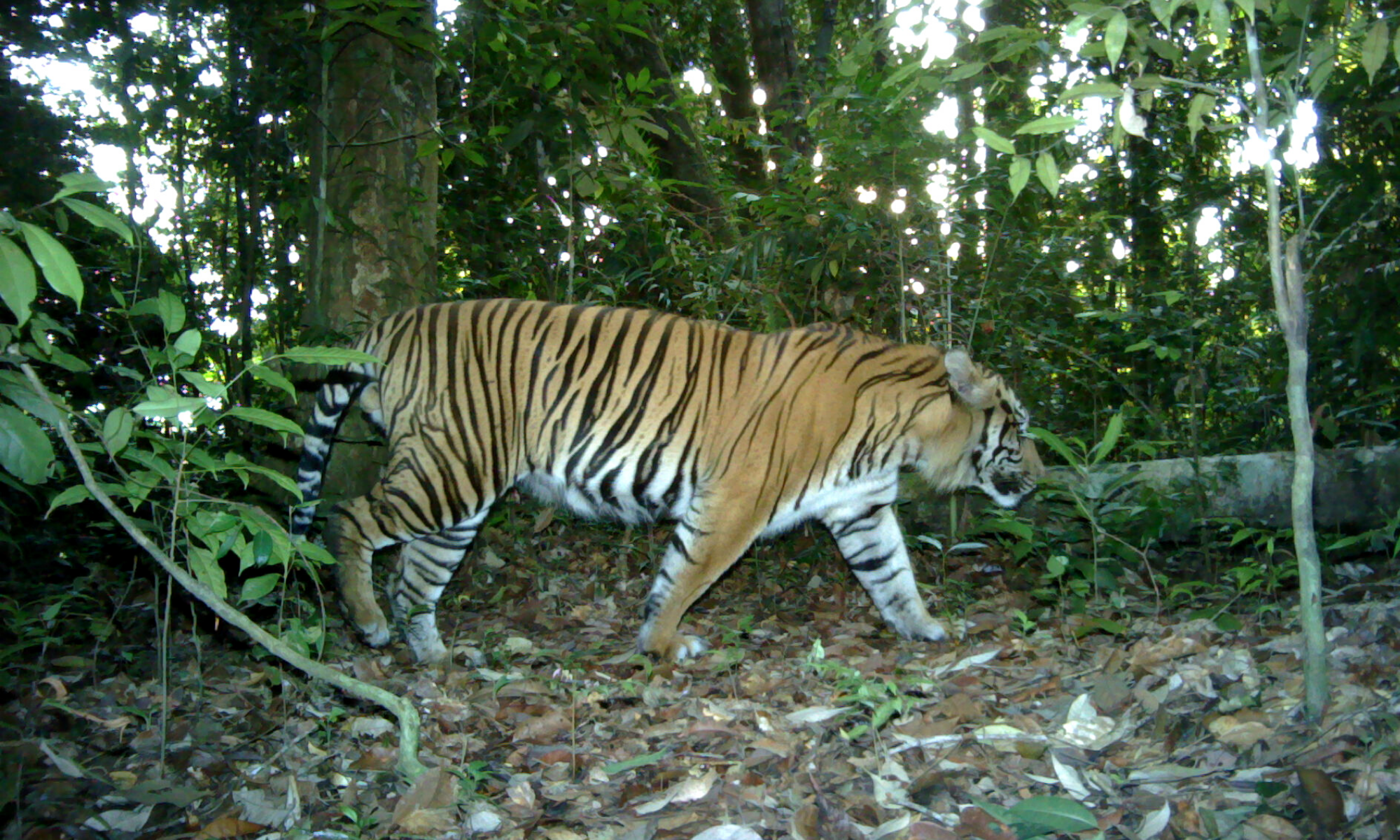 This second sighting left the whole team a little shaken, although at least everybody could now say they had seen a wild Sumatran tiger in its natural habitat. The team decided to focus on work – and not what we had just seen – and started planning the next day’s camera trap locations. We also had to decide what to do about the curious tiger and we agreed that there should be a guard roster for the night, with two of the team always watching in case we had more visits, but changing every two hours so everybody could get some sleep.

At 9.30 pm, the on-duty team woke everybody up to report that the tiger was back, close to the outer wooden column of our shelter and separated from us only by the leafy branches used to protect the camp fire at night. Torches were shone, there was a glimpse of the apex predator, and then the tiger vanished into the dark of the night.

Luri has more than 10 years experience in field activities for tiger conservation in Kerinci Seblat, including conducting camera trap and occupancy surveys. Since 2016, he has officially led FFI’s Kerinci Seblat SMART monitoring, in collaboration with the national park and other partners.