There’s something exciting happening above the Gobi Desert

In June 2011 I met with a conservation legend, Dr Mike Norton-Griffiths, at the Fauna & Flora International (FFI) Cambridge office. Among other talents, he has spent decades bringing scientific rigour to aerial wildlife surveys and has been responsible for some remarkable long-term and large-scale work in East Africa.

Although I had heard of him, my emphasis on tropical rainforests over the years meant that I had never really given the techniques used over the African savannahs much thought. But then I started to tell him about our work in Mongolia with the Oyu Tolgoi copper/gold mine and the problems we had with wild ass as described in my earlier blog, in which I wrote: “[The ass’] extensive range also makes this species difficult to study, and novel methods (such as high-tech aerial surveys perhaps) will need to be adopted to effectively monitor the population.” 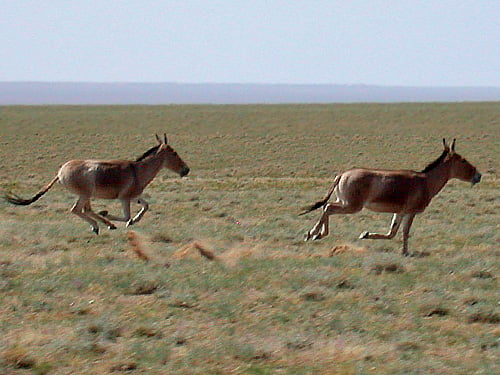 The extensive range of the wild ass makes it an ideal indicator species, but difficult to study. Credit: Tony Whitten/FFI.

I learned that Mike had done some successful and informative aerial surveys of saiga antelopes in western Mongolia some years before. As we talked, I realised that extensive surveys would be the best way to really get to grips with how many of the highly mobile ass there were and where they wandered.

Wild ass do not migrate seasonally but rather follow good patches of grazing. Work by others, especially Dr Petra Kaczensky, had determined that there was a distinct population in the south-east Gobi within which the Oyu Tolgoi mine sits, and although I had helped to arrange some ground surveys over my years of engagement in Mongolia I was keenly aware of their many drawbacks. The possibility of persuading the mine to undertake aerial surveys was therefore exciting.

In one of our regular meetings with the mine staff I broached the possibility of such surveys. The response was, “It can’t be done.” Nothing is more likely to make me behave like a bulldog and refuse to let go of a problem!

Over the following 18 months we tried to turn that decision around. New Oyu Tolgoi staff became wonderful allies, the lenders for the project were very supportive, and – although there were indeed formidable hurdles, even up to the very last minute – the survey is finally, and literally, off the ground using very high-tech equipment, a wonderful pilot, and a team of remarkable students who are diligently poring over the wonderful images for any signs of wildlife and livestock.

These surveys are expensive – indeed very expensive – but the policies of the lending institutions for the mine set the bar high in the area of biodiversity for their borrowers, and solid, repeatable surveys of the most important species in the landscape were deemed necessary.

The area they are surveying is 150,000 km2 and this represents the range of the south-east Gobi population of wild ass plus a buffer to the north and west. To the east it is bounded by the fenced railway, and to the south by the fenced border with China. 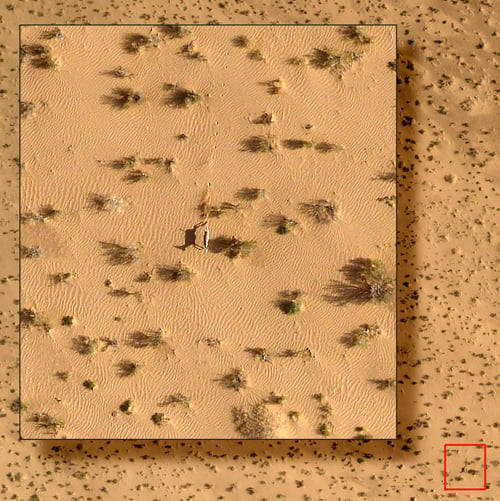 The survey will produce some 120,000 high-resolution photographs, allowing scientists to zoom in and identify species (such as this black-tailed gazelle) that appear as mere dots in the landscape. Credit: South Gobi Aerial Census.

It’s a vast area – rather larger than England, larger than either Nepal or Bangladesh, about half the area of Italy and Poland, and twice the area of Ireland or Sri Lanka. The total length of the flight line is 30,000 km – that’s three quarters of the earth’s circumference! At the other end of the scale, each pixel of the photos taken from 1,450 m above the ground is a mere 2.5 cm.

The survey team, led by the indomitable Mike Norton-Griffiths himself, has constructed a website www.southgobi2013.countingstuff.org which is a daily log of their experiences and well worth a look. Start from the bottom of the May archive and keep returning!