The wonder of nature at night through the lens

The rainforest is full of surprises. Even familiar things can suddenly show themselves in a different light – sometimes quite literally.

The delicate white fruiting bodies of Filoboletus mushrooms are a familiar site in Sumatra. Usually a week or so after a period of heavy rain, they spring up in photogenic clumps on rotten logs or fallen twigs on the forest floor. I had photographed them numerous times during the day without realising that their true extraordinary nature was only revealed at night.

Many denizens of the rainforest are more active after dark, and during Fauna & Flora International (FFI) biodiversity surveys, we spend a few hours each night tramping through the forest with torches looking for nocturnal creatures.

Snakes, frogs and insects are all more active once the sun sets, and in the concentrated beam of a torch, well camouflaged species – which can be almost impossible to spot during the day – can be more easily seen.

But sometimes it takes the natural shadows of a rainforest night for certain things to be revealed. One particularly dry and bright night I was out looking for snakes. Dry moonlit nights are usually less productive for some reason and I didn’t have much success.

The moon was so bright on this night that I turned off the torch and sat down on a log to let my eyes get accustomed to the silvery light.

After a few minutes I could see clearly. I became aware of a greenish glow nearby, an unearthly luminance at the end of the log I was sitting on. Earlier in the day I had spotted a cluster of Filoboletus on this log, their wax-white caps obvious on the dark forest floor. Now I noticed that these same fungi were glowing with their own mysterious light.

Their light was faint, but moving closer to them it was quite clear – bright enough, I suspected, to be recorded on film. There was no way to meter this faint light so I set up the camera for a ten-minute exposure. It was pleasant sitting in the forest, so I tried another exposure at 15 minutes; then another at 30 minutes; and finally (as I had discovered I could actually read my book by the light of the moon) an hour exposure.

This was in the days of film, so it was over a month before I got the results back. I trawled through the 20 films assessing all the things I had photographed in the last month without thought of the fungus pictures.

Afterwards I suddenly recalled my experiment. I looked back through the transparencies and found one strip that was blank. The first four shots showed nothing at all. Only on the fifth frame – the one-hour exposure – was there the faintest sign of an image. Film had a latitude of around five stops, meaning that this faint exposure was probably five stops underexposed. To record the fungus I would need at least a five-hour exposure.

A few weeks later I found another small group of Filoboletus. This time I built a small tent over the fungi to guard against ambient light and the possibility of rain ruining the shoot. I set up the camera to give a five-hour exposure and went out to look for snakes.

It remains unclear why certain species of fungus are bioluminescent. It is not an uncommon characteristic, but is more often seen in the mycelium of fungus rather than in the fruiting body as happens with Filoboletus. The effect is caused by an enzyme known as luciferase.

The next time I checked my processed films I discovered this single image that had captured the mysterious night time phenomenon of Filoboletus. 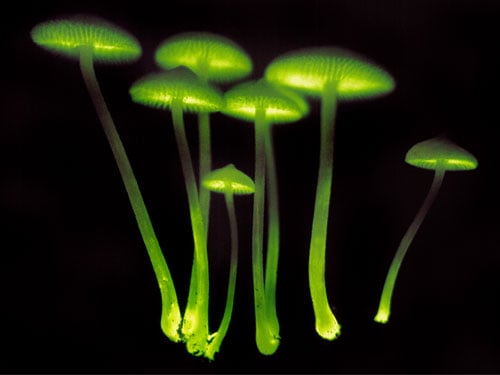 The true beauty of the Filoboletus fungus is revealed in the dark of night. Credit: Jeremy Holden/FFI.