As a zoo keeper, it’s not entirely unusual to have wet shoes before 10am, a found whisker or feather stuck in your hat or ponytail for safe keeping and of course a plastic bag in ones pocket filled with some form of poo. Needless to say we’re dedicated from top to tail to the animals in our charge and of course their wild counterparts. Zoos play an important role in not only caring for rehabilitated and endangered animals, but in captive breeding programmes, fundraising and most importantly, the education of such issues to the wider population.

Bridging the gap between urbanites and wildlife is a little trickier than you might think. Though the difference between a dingo and a domestic dog may seem slight, it’s easy to get confused when you see them for the first time. One morning I was cleaning away when I heard a woman shouting “Would you look at SIZE of it! That guinea pig must be metre long!” No, not the discovery of a new species, this was in fact a rather surprised patron at her first sighting of a wombat. Australian natives I’ve learned can cause a spot of excitement, particularly with international travellers, as Australian fauna is just so unlike anything else they’ve seen. 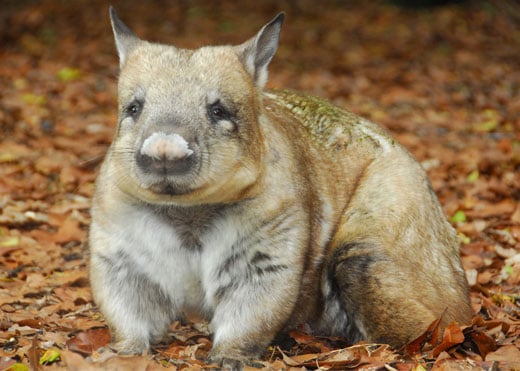 Our wildlife evolved quite differently from the rest of the world’s, due to Australia’s isolation from other continents for such a long period of time. Consequently we have an array of uniquely shaped critters that people often find delightful – and none more so than the elusive wombat. Even Aussies are often surprised when they find them living under the house or grazing by a roadside. In the wild they spend most of their time underground with most of us oblivious to their presence!

If you’ve never met a wombat, let me tell you they are the most interesting little marsupials. Thickset, stocky rascals, they grow to around a metre long and stand around 40cm on all four of their stout legs. Racing around at 40km on occasion, jumping and spinning around excitedly at 30 odd kilos, they are quite capable of bowling you over!

Thought to be one of the most intelligent of our fauna, I’ve personally seen wombats excel at different training tasks and problem solve of their own accord – like figuring out how to open doors! In the wild, wombats will usually retreat to their extensive burrows when threatened, but corner one and you’ll soon find out those stubby little legs can jump and their bite packs quite a punch! Many a time I’ve found myself scaling the walls of a wombat enclosure in an effort to avoid a would-be wombat bite when one had his cranky pants on. Nocturnal and generally solitary in nature, wombats are an Aussie icon, quite content to be left alone munching on native grasses and lazing about. 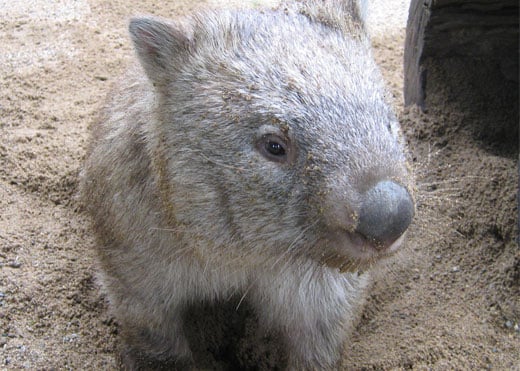 Closely related to the koala, there have been as many as 12 different species of wombat in Australia’s history with the largest being a part of our prehistoric megafauna, a three tonne Diprotodon, which is to date the biggest discovered marsupial on any continent. Today however, only three species remain, one of which sadly, is one of the most Endangered mammals on the planet.

The Northern hairy nosed wombat is Critically Endangered, even more so than the Sumatran tiger or giant panda, with numbers sitting at just 138 individuals. Once found across three different locations, they have now become locally extinct in all areas bar one, through human encroachment and introduced animal and plant species. 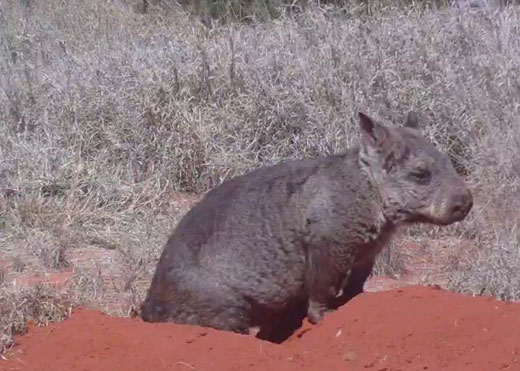 The last of their kind reside in a single remote area at Epping Forest National Park which means they are at increased risk of extinction through natural disasters like fires or spread of disease. They have to compete with pest animals for food, predators such as wild dogs, and introduced grass species eliminating their native diet. In fact, so little is known about Northerns that they have never been successfully bred or even kept in captivity. With only a single population at high risk in the wild, it wouldn’t take much for them to vanish and end up as just another footnote in the book of what once was.

In 2008 the Northern Hairy Nosed Recovery Plan was implemented by the Department of Environment and Heritage Protection, along with corporate sponsorship from mining company Xstrata. This saw the construction of a predator proof fence to protect the population from would-be predators and keep out competition species. Starter burrows were built and food and water stations were set up to help the current population, with wombats monitored with camera traps. Environmental issues such as weeds, fire and spread of disease were managed where possible and research to gather DNA via hair samples was obtained for genetic information on the population. Perhaps the biggest task of all, relocating fifteen male and female wombats to a  second colony at Richard Underwood Nature Refuge near St George was undertaken, a site inhabited by the species some 100 years earlier. 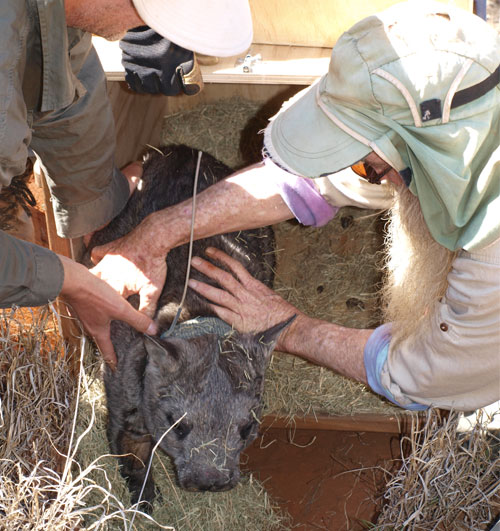 Since the recovery plan was established all wombat lovers have waited with baited breath for a glimmer of hope which, in October of 2011, came in the form of a single birth…the first Northern hairy nosed wombat joey in the relocated population – followed a week later by a second. Now I can tell you wombats are often difficult to breed in captivity and the birth of a baby wombat in a zoo is cause for much excitement, but to hear of a Critically Endangered Northern hairy nosed wombat born in the wild AND in a recently translocated small population?! To say wombat keepers all over Australia were ecstatic is an understatement! Obviously it will take more than two little wombats to save the species, but it gives hope to many who have struggled to save the world’s largest burrowing marsupial from extinction. Just maybe, these little characters have a future.

So I encourage those of you who haven’t met a wombat to take a trip to your local zoo and watch them sleeping belly up, grazing lazily in the sun or, if you’re lucky, chasing some poor keeper up the walls of the enclosure …and take away a greater appreciation for these robust little battlers. Even though they have a long way to go before being safe from extinction, in understanding them and supporting the recovery plan, maybe one day we may see Northern hairy nosed wombats flourish in the wild once again.