I have been working to protect wild tigers since 1999. But even now, I often find myself thinking about how to better communicate the tiger’s conservation message and raise awareness of its plight and importance. Yet, whenever I receive the photographs from Fauna & Flora International’s (FFI) camera traps set deep in the jungle, I’m reminded that no words are needed because these images speak so eloquently for themselves. 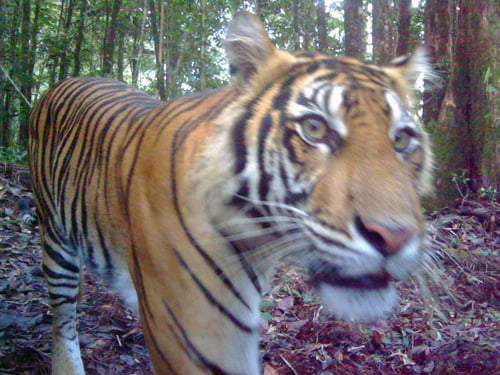 Curiosity gets the better of this young tiger as it moves in to investigate the camera. Credit: FFI.

Camera traps are a window into the rainforest. Downloading and then flicking through the photos they capture is undoubtedly one of the most exciting parts of my job, especially the surprises that lie in wait.

I know our Indonesian camera trapping expert Yoan Dinata, shares a similar excitement. Working together, we’ve recorded inspiring images of rare pheasants, a golden mongoose and have even rediscovered the Sumatran ground cuckoo! But the Sumatran tiger is the prize. It is so heartening to see these images in such abundance and know that FFI is ensuring the survival of this magnificent creature in the wild. 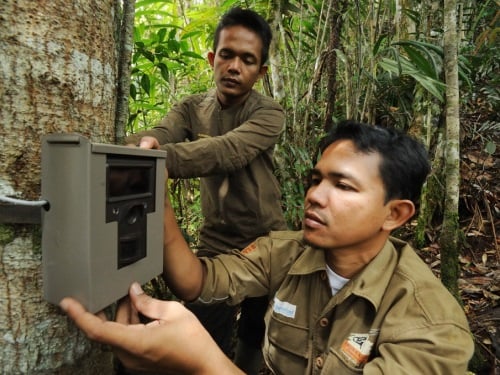 Taken in the jungles of Ulu Masen in Aceh, northern Sumatra, here follows a rare glimpse of this secretive animal from an FFI camera trapping campaign that concluded in February 2014.

Several things immediately struck me about these images: first, the tigers all look in great condition (vigorous body form and shiny pelt that accentuates their prowess); second, there are many females – usually the limiting resource in a wild population. The males can typically be identified by their stockier shaped head (whereas the females are slender) and the incredibly powerful forearms that make a vivid contrast to the hind legs. 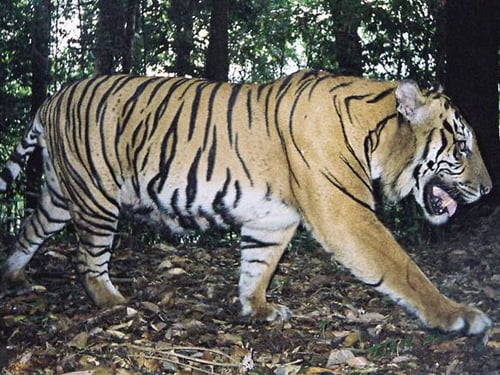 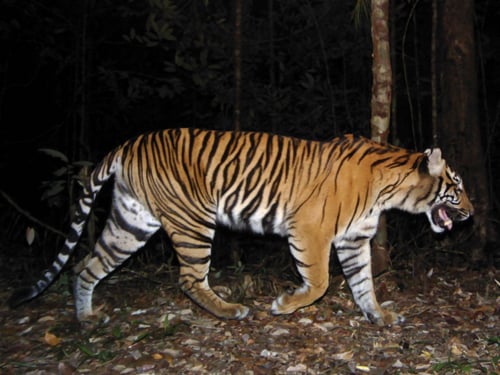 Female tigers, on the other hand, are more slender. Credit: FFI.

Despite the hope provided by these camera trapping results, tigers are in real trouble in Asia and are by no means safe in Sumatra.

The recent International Wildlife Trade symposium highlighted the dramatic plight of not only tigers, but also rhinos, elephants and pangolins in both Asia and Africa. The demand in Asia for their body parts (mainly for alternative medicines) has reached alarming heights. This symposium sought solutions that were offered through the newly launched United for Wildlife alliance, of which FFI is a founding member, and a declaration by governments with a clear set of mitigating actions. 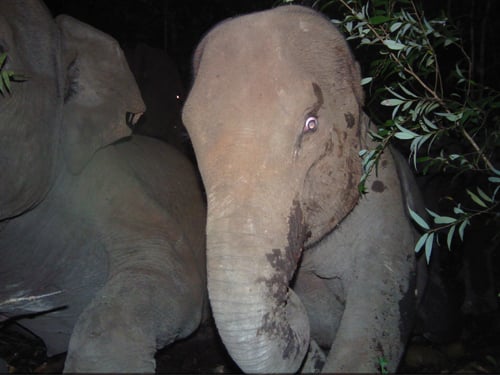 The camera traps also photographed a range of other animals, including these elephants. Credit: FFI.

Action can take many forms, such as forwarding this blog to others to raise awareness or seeking innovative ways to raise funds for tigers. FFI’s camera trap photos resonated strongly with Janet Laurence, a celebrated artist and Conservation Circle member of FFI Australia, so she decided to run an exhibition and sell some of the prints; raising valuable funds for conservation.

Tonight FFI’s President, Her Royal Highness Princess Laurentien of the Netherlands, will launch the FFI Singapore Conservation Circle and bring to light FFI’s Sumatran tiger work to an audience of 100 distinguished guests.

It makes you wonder, what other innovative ways could be used to ensure that this king of the jungle keeps his rightful place on the throne?