The delights and dangers of local knowledge

The mystery of the upah began one sultry afternoon in a small west-Sumatran village on the outskirts of Kerinci Seblat National Park. I had been chatting with some locals about the venomous creatures that could be found in the surrounding forests, and as expected, the list included snakes such as king cobras, kraits and green pit vipers.

I also heard about giant hornets that could knock out buffalos, and enormous scorpions whose stings were no worse than those of a bee. But the creature that was most feared was one with which I wasn’t familiar: the villagers called it upah.

I was told that it was a giant, 30cm long centipede with a thick, ghastly green body. It lived in the dead limbs of tall trees, from which it made a noise like a cat, and it could be heard calling from the same spot year after year. One villager said he had once found a large fallen branch from which this sound emanated. When he cut it open to see what was inside, a huge upah dashed out, gnashing its hook-like pincers. Everyone agreed it could deliver such a painful bite that grown men had been known to cry during the agonising nights that followed an attack. I was sceptical. Why would a centipede, especially such a big one, be restricted to a single hole in a tree? How could it make any sound? And why hadn’t I heard about it before? I did know that there were big Scolopendra centipedes in Sumatra. Indeed, I was fortunate not to get bitten when I shook one out of my trousers one morning. But these beasts were forever on the move and certainly couldn’t yowl like a cat.

I asked if these were what the locals knew as the upah, but they said no. The upah was bigger, much bigger.

There is strong debate among scientists and field researchers on how much credit should be given to local stories. Most agree that local knowledge can be considerable, but it is not informed by scientific principles and is often a confusing blend of fact, supposition, and fantasy. It is useful, but not always reliable. 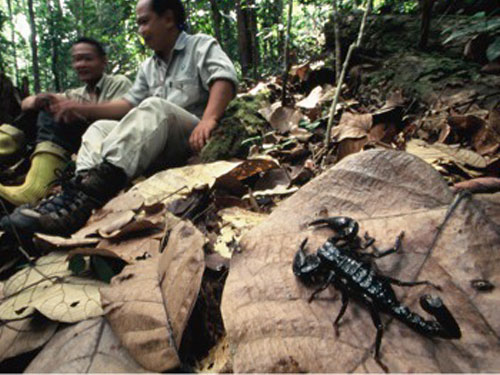 I know some well-respected researchers who are not interested in villager’s tales, and others who are too willing to believe everything they hear. As with many disciplines, it requires a fine balance – an open mind tempered by healthy skepticism. If I believed everything I heard I would have wasted a lot of time looking for a five-toed species of lion living in the Sumatran rain forest, a snake-eating bovid in Cambodia, or a village of weretigers, always in the valley beyond. But if explorers had given more credit to local knowledge, both the Okapi and the Malay tapir would have been discovered sooner. I do tend to fall in to the skeptical category, but I am also a strong believer in listening to what local people have to say. In this case, there was something in the consistency of the upah story (I asked many people) that made me, in spite of myself, tend to think that it might be true.

Some weeks later, as I walked through the forest, I heard a cat-like ‘yao’ followed by a rattling ‘churr’. The sound came from high in the canopy. I didn’t recognise it – it was not quite bird and not quite insect. Scanning the trees through binoculars, I noticed a hollow-looking branch at right angles to the trunk. The sound seemed to be coming from there. My guides heard it, too. “That’s the upah!” they told me excitedly. Over the years, I have learned to spot when local people are making things up – the game is given away by their shifting gaze or a pleading whine that implores belief. However, when telling stories they believe, their tone is natural and matter of fact.

This is what I had sensed when they spoke about the upah, which is why I hadn’t dismissed its existence out of hand. Their obvious belief in the story was confirmed by this mysterious cat-like call – just as they had told me. Further proof came when I asked if one of them would climb up and capture me an upah. Everyone thought this was a crazy idea. The upah would feel the climber’s approach and come dashing out to attack. The bitten climber would then fall to the ground like a stunned fly. I didn’t fancy being responsible for that outcome.

Later that week, I trekked back into the forest with a tape recorder and gun mic to at least record the sound. The upah – or whatever it was – was still calling from the same place. I set up the gear and pressed ‘record’, but for some reason the machine wouldn’t work. This unaccountable equipment malfunction spurred me to believe that I was on to something; I was experiencing what is known as ‘the curse of cryptozoology’. The mystery was deepening, but I was obliged to move on to another study site before I could solve it. 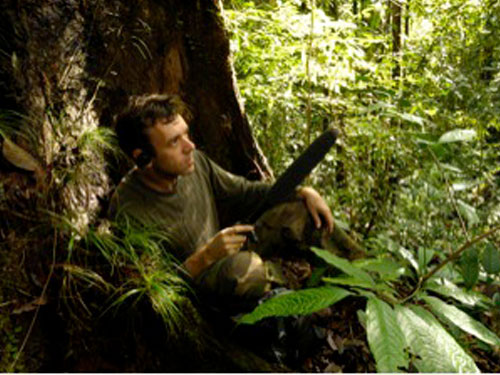 A few years later, while walking through a different area of the Sumatran rainforest with legendary birder Dr. Frank Lambert, I recounted the story of the upah. He listened, but was more interested in hearing about my bird list for the national park, which now stood at 381 species. He mentioned one that I hadn’t seen: the elusive Malaysian honeyguide. “They’re not easy to spot,” he told me, “but you can often hear them.” Moments later, I froze. From the canopy came that cat-like ‘yao’ followed by the rattling ‘churr’.  I stood there with my finger in the air, pulling that face people adopt when they’re really listening: mouth slightly ajar, eyes widened in anticipation. “That’s the upah!” I cried when the sound came again. Frank looked at my delighted face with a touch of pity. “No,” he said. “That’s actually the Malaysian honeyguide.”

And so the mystery of the upah ended, not in a giant centipede with vocal abilities and a killer bite – as I had credulously hoped – but with the 382nd species on my bird list.