Entering the forest in Sumatra is not taken lightly, at least not by the locals. It is perhaps impossible for us as visitors to understand what the dark and dangerous forest means to the people who have grown up around it.

Trying to comprehend this, and respecting the beliefs attached to it, is something Debbie Martyr of Fauna & Flora International’s Sumatran Tiger Conservation Programme has always made time to do, and I think one of the reasons that Debbie has been so accepted by the people living around Kerinci Seblat National Park is because of her sensitivity to these local beliefs.

I first learned of these practices from Debbie when I joined her on an expedition into the Sumatran rainforest. I was also to meet and become friends with some of the Kerincinese shamans – interesting and useful people, to say the least. 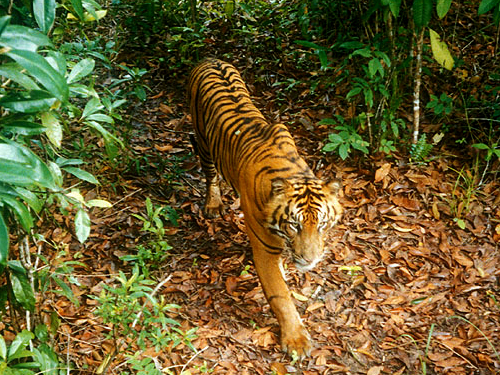 In Sumatra, the tiger is lord of the forest. Credit Jeremy Holden/FFI.

Despite the seriousness with which Islam is practiced in Sumatra, the shadow of shamanism and ancestor worship remains, especially where the forest is concerned. There are many rules and prohibitions for those entering the jungle. Small things, one might think – but likely to anger the spirits or excite the wrath of the tiger (which in Sumatra is lord of the forest) if not observed.

Bathing nude is totally forbidden – a tough one to comply with when faced with a clear deep stream after a day of sweat, blood and tears (that is ‘tears’ to rhyme with ‘stairs’, not ‘fears’). Washing a pot directly in the river is also a no-no. But perhaps the most important prohibition to remember is that the tiger is never referred to directly for fear of conjuring him. Instead he is spoken about elliptically – ‘grandfather’ or ‘he who owns the forest’, or often simply ‘him’.

Even before venturing into the forest one must seek permission from the spirits and ask to be protected. This involves a small ceremony at the forest edge. Special herbs and resins are burned and, if it is a big trip, the blood of a chicken may be spilt.

Employing a shaman as one of our guides made financial sense: he was always around to conduct the ceremony and incurred no extra cost – an important consideration when working on a field budget. Pak Darita, our in-house shaman, has now joined the spirits in the sky, but I like to think that due to his ministrations, Debbie and I both stayed safe and demonstrated to the locals that we too respected the forest laws.

Shamans can keep the tigers at bay, but on occasion they can also call the tiger. Part of the shamanistic practice is for the shaman to enter the body of the tiger. Known as pawang, these people are highly respected in the community. In tiger form they can travel the forest and gain knowledge. To anthropologists, this concept is known as the ‘power animal’. It has its counterpart in the black cat familiar of the European witch, and with those same flighty females changing themselves into a hare.

This may seem a bit ethereal, but it has profound conservation relevance too.

In Sumatra, the local tiger is known as the ‘village tiger’. It is the one that the shaman is familiar with. As the old saying goes, it is ‘the devil you know’. Trapping this animal for its skin or bones is avoided because slaying the village tiger allows other tigers – ‘the devil you don’t’ – to enter the territory. This tiger may not be as respectful to the village: goats may go missing, or worse.

Harnessing these beliefs for conservation purposes is important and something that Fauna & Flora International (FFI) is engaging in, both through Debbie’s work, and with the recent development of a Cultural Values Programme. As Mark Infield, director of this initiative, noted in a recent blog, we owe the continued existence of chimpanzees in Sapo, Liberia, and Siamese crocodiles in Cambodia, to these deep spiritual beliefs. Respecting and working with local lore can often be the key to conserving both habitats and endangered species.

It can also be a wonderful cultural experience. The most famous of the Kerincinese shamans is Pak Yerti, a colourful character who appears to conduct his rites looking like a cross between Noel Coward and King Lear. He is young for such a respected wizard, wearing a thin moustache rather than the Dumbledore beard.

The last forest rite he performed for me was in a suitably mysterious-looking gulley on a Sumatran volcano. He arrived in a gold brocade coat and a miraculous hat decorated with fur and sprigs of vegetation. Over a fire of sweet-smelling herbs he sang in a high, clear voice, calling the tiger spirits while three of his companions danced and changed, inwardly at least, into the striped beasts.

On other occasions I have seen Pak Yerti dance with a pile of plates balanced on his head. These are then smashed with an axe while he dances on. When slashed with a kris (a long wavy dagger) he does not bleed. After one all-nighter, Pak Yerti stumbled up to me at 3 am and said ruefully, “that is another pair of trousers ruined.” Sure enough, his trousers were full of holes inflicted by the kris, but there was no blood.

I don’t know how he did this: how he could grasp the razor-sharp blade without injury, or make water pour from the end of a walking stick. Tricks no doubt, but I could forgive him if they were: why should the spirits be any more amenable to being called at whim than the poet’s muse? But the belief bespeaks a bigger picture – one that sets the scene for man’s relationship with the forest, its animals, and its spirits.

While writing this I received an email from Debbie Martyr in Kerinci. It read: “Ooh did I tell you that somebody stole my spade from my little bit of land? I gave up hope I would ever see it again, but mentioned to a couple of the villagers that my spade had been nicked and when they asked if I was going to tell the police I said ‘nah, I don’t bother with the police, have told my tiger soul brother and he will deal with the person.’ And yesterday I went up there – 3 weeks after it disappeared – and there was my spade.”

Whether we believe in the shaman’s power or not is immaterial. Pak Yerti knows he can travel the nighttime forest in tiger form, the local people believe in a notion of tiger justice, while, as conservationists, we know the value the tiger has within a forest ecosystem.

And we all need to know that the tiger is there in that dark, dangerous forest.