In FFI’s fourth decade, the pages of its journal (which at that time was still known, rather grandly, as  the Journal of the Society for the Preservation of the Fauna of the Empire) provide amazing insight into the events that were unfolding with the journal itself, the Society and the wider world in general.

Between 1934 and 1943 a number of features were introduced to the journal that are still present, in some form, in Oryx today. Conservation Notes, for example, is an early forerunner of the Conservation News and Briefly sections, although the focus now is global and ranges across animals, plants and international conservation issues. In the most recent issue of Oryx, for example, articles in the Briefly section covered topics from the monogamy of hawksbill turtles in the Seychelles to vampire bats nibbling the feet of penguin chicks in Peru’s Atacama Desert.

Another section that became a regular feature in the journal at this time was the book review section – one of my favourite sections in Oryx. Placed, as it is, at the end of the journal, it feels less formal than preceding parts of the journal. Where else, but in this section, could you find a quotation from The Matrix nestling up to a sentence from Shakespeare’s The Tempest?

The tone and subject of the articles published in the journal seems to have evolved during this decade. There are more articles looking at conservation in general, such as Wild Life Conservation (published in 1934) and The Conservation of Wildlife: Retrospect and Prospect (1937). There is also an increase in the number of articles being published about conservation in the UK – from discussions about the status of the polecat and pine marten in Britain in 1936 to some notes on British bats in 1943.

Despite ending on a myth-busting note (“Finally, bats do not fly into women’s hair”), the latter article doesn’t entirely dispel the air of mystery surrounding these denizens of the night; in particular the sentence describing the sound of the serotine bat is, to my mind, somewhat disturbing: “The only sound I have heard on the wing has been a high-pitched squeak of the sort dolls used to give in pre-Great War days.” 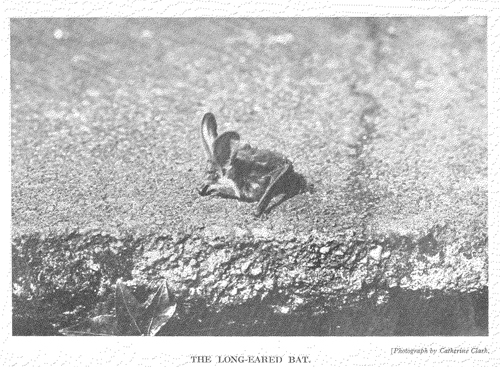 The aptly-named long-eared bat, taken from an article published in 1943.

In 1936, the Society received something of a prestige boost when The Prince of Wales (who had been patron of the Society since 1929) consented to remain in this role following his accession to the throne. We have been fortunate that every British monarch since then has consented to be the patron.

Interestingly, the issues of the Journal from 1936 make no reference to what must have been a notable event at the time: namely the abdication of Edward VIII after only a few months on the throne. Instead the journal merely published an announcement by the Executive Committee in 1937, stating that: “H.M. King George VI has been graciously pleased to grant his Patronage to the Society.”

The outbreak of the Second World War, however, made far more of an impact in the journal’s pages. Discussing plans for the next ‘International Fauna Conference’ in 1939, for example, the journal editor had this to say:

“Unfortunately every engagement in these troubled times must be regarded as provisional. The war clouds are still heavy and it would be foolish to be blind to the possibility that the assembly of this Conference, designed to further the conservation of Nature’s treasures for the benefit of future generations of mankind, may be prevented by a cataclysm of destruction, from which all mankind would suffer from generation to generation.

“But it would be equally foolish to let such fears and doubts deter us from planning good work. Nor should we lose our faith that such conferences as these, where men of many nations meet with the common aim of securing the common good, help to promote good feeling and sane relations between race and race.”

Keep calm and carry on, in other words.

Standing the test of time

One of the most striking items to feature in the journal during this decade is the mention of the Nigerian Field Society. This organisation features in a 1934 article about wildlife preservation in the northern provinces, in which it is credited (in part) with increasing the level of interest in conservation in Nigeria.

Established in 1930, the Nigerian Field Society has published its journal The Nigerian Field since 1931, making it one of the country’s oldest continuous publications. While The Nigerian Field has more of a regional focus than Oryx, both of these long-running journals provide space for researchers and conservationists to disseminate their findings.

Conservation journals like these are crucial repositories for knowledge, in which being published is just the start for an article. It might end up being used to inform policy or conservation practice, or contributing to the wealth of information on a particular species or habitat.

It may even end up being revisited, decades later, to provide insights into the historical context of a conservation issue.

Part five in this series (1944-1953) will be published at the end of May 2013. To browse through all material relating to FFI’s 110th Anniversary, visit our dedicated page.