In its third decade, the Society for the Preservation of the Fauna of the Empire (as Fauna & Flora International was known at that time) underwent changes in the way it functioned, some of which relate to issues that are still pertinent today.

Chief among the Society’s developments between 1924 and 1933 was an increased emphasis on membership recruitment. In 1924 the membership stood at 48 honorary and 179 ordinary members, but by the end of the decade this had increased to 56 honorary, 86 life and 802 ordinary members.

Furthermore, the officers running the Society appeared far more aware of the value of membership as a measure of the organisation’s development, as the below diagram (published in the 1930 issue of the journal) shows. 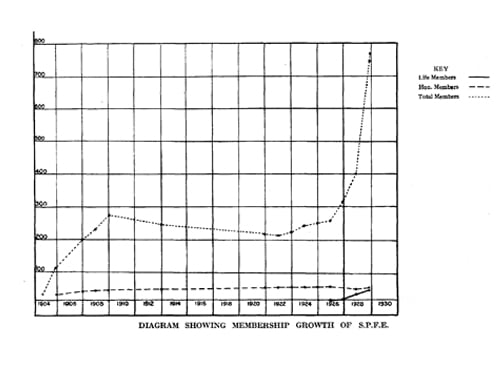 Diagram showing membership growth, taken from the 1930 issue of the society’s journal.

Exhortations to secure more members featured in the journal’s pages, including the use of social networks: “If each of our members could bring in just one recruit, our ideal would become a fact.”

Alongside membership, the journal itself also grew. Seen as “the main method of advising the public as to our activities,” three issues of the journal were published per year from 1930 onwards, instead of just one. As early as 1925, the scope of material that the journal would consider publishing was highlighted, as follows: 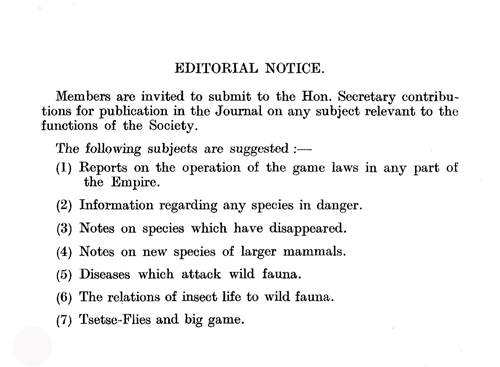 Call for articles, taken from an editorial notice in the 1925 issue of the journal.

Though a long way from Oryx’s current scope, and still imbued with some of the utilitarian flavour of the journal’s early issues, publication of this list by the Society shows an appreciation of the aims and readership of its journal.

The Society itself also developed its own objectives, which were likewise published in the journal, during this decade. Again, these bear little resemblance to FFI’s current aim and mission; however, some elements of these objectives could be seen as forerunners to the way in which FFI operates today.

Most significantly, the objectives stipulate that “It is no part of the aim of the Society to preserve animal life at the expense of human industry or natural development.” This suggests an awareness of the complexities inherent in the relationship between conservation and people, and the importance of striving for a balance between interests.

Some articles published in the journal during these 10 years also resonate with FFI’s modern conservation work. A 1924 article entitled ‘The Australian Fauna’, for example, emphasises the importance of working with people to change attitudes towards conservation:

“Only education, and getting the people to love and value the birds and animals, can overcome this [that the average person is rather more inclined to destroy than to admire the wild things around him]. Hence we have one day every year, known as Bird Day, on which the subject has special mention in the primary schools. Many of the school children are moreover members of the Gould League of Bird Lovers.”

FFI’s turtle conservation work in Nicaragua (profiled in this short video by IUCN) is a great example of how real conservation successes can arise from helping people appreciate the beauty and wonder of nature.

The relationship between people and wild places is further explored in other articles published during this decade. An article from 1927, for instance, describes the proposed creation of a transboundary national park in the Tatra Mountains, located on the border of Poland and modern-day Slovakia. A significant aspect of this article is the description of how the park will be managed:

The park didn’t gain protection until the 1940s, but is now designated as a Biosphere Reserve under UNESCO’s Man and Biosphere Programme. This is particularly fitting as Biosphere Reserves are described by UNESCO as, “Places that seek to reconcile conservation of biological and cultural diversity and economic and social development through partnerships between people and nature.”

While there is much of interest in the journal between 1924 and 1933, my favourite article is about the rediscovery of the Dominican diablotin.

This article, it seems to me, contains many elements that make it special. The opening paragraph describes the discovery of a strange bird outside someone’s door following a storm, and the subsequent invitation to a keen naturalist to come and inspect it. Following what sounds like much debate, and the examination of records and preserved skins, the bird is pronounced to be a female diablotin, or black-capped petrel. The local name of the bird means little devil, and it is so named because – like other members of the petrel family – the species is nocturnal at its breeding sites, and emits strange, unearthly shrieks.

Although this story ends unhappily for this particular diablotin, a footnote in the article explains that the species became protected by a Special Legislative Order two months after her discovery.

To me, this showcases what we still strive to achieve in articles published in Oryx today – a good story, with facts couched in evidence, but, most importantly, a lasting outcome for conservation.

Part four in this series (1934-1943) will be published at the end of April 2013. To browse through all material relating to FFI’s 110th Anniversary, visit our dedicated page.