In 1921, the journal reappeared under the title Society for the Preservation of the Fauna of the Empire Journal – New Series. Beyond the editorial by the Society’s Chairman, Edward North Buxton, little mention is made in this volume of the First World War. Instead, the subject that dominates this first volume of the Society’s journal is the conservation of the African elephant, a topic that continues to show up regularly in FFI’s journal to this day.

The shadow of the war and its effect on conservation is more apparent in the 1922 issue of the journal, however. This issue contains a letter from one of the Society’s members, Count Alexis Bobrinskoy, in which he asks for the Society’s help in protecting the remaining European bison in the forest of Bieloviège.

The fate of the forest during the First World War mirrors the wider changes in this part of Europe at the start of the 20th century: In 1914 the forest belonged to Russia, but was occupied by German troops for a year and a half during the war, and subsequently – having “changed hands two or three times” – finally became part of Poland.

Count Bobrinskoy’s letter outlines his concern that the bison population was declining as a consequence of overhunting by both the German troops and local people. The Society agreed to send a letter to the Polish authorities to outline the importance of protecting this species. Today, the forest is designated as a UNESCO World Heritage Site, replete with a sizeable bison population.

This consideration of the effects of war on a country’s wildlife and wild places is particularly interesting given FFI’s subsequent work in post-conflict areas, including Liberia, Aceh and Cambodia.

Shifting away from sport hunting

As seen in the first years of the journal’s existence, the issue of sport hunting continued to be a source of interest in the following decade. Interestingly though, an article by Abel Chapman published in 1922 about the white rhinoceros in Sudan, sounds a note of a more esoteric nature. 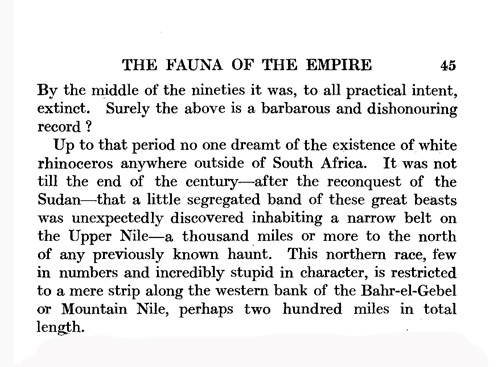 An extract from Chapman’s article on white rhino, published in 1922.

Despite his apparent disdain for the species (describing the northern white rhino as “incredibly stupid in character”), the author regards the prospect of its extinction as a cause for concern.

Chapman berates the “barbarous and dishonouring record” that saw the rapid disappearance of a species previously “so abundant over the whole sub-continent that some [pioneers] seem to have shot them wholesale, as we go out to shoot rabbits.”

The fate of the northern white rhino still hangs in the balance, but Chapman would hopefully be a little mollified to know that the organisation he belonged to in its early days continues to play a key role in the survival of the subspecies.

Interest in conservation issues beyond Africa, the cradle of the Society’s origin, is scattered throughout the volumes published in this decade.

Graham Renshaw’s article on the extinct Réunion starling, in the 1922 volume, tells the story of a species that, like the white rhino, had been abundant in the not too distant past. The starling, native to the island of Réunion in the Indian Ocean, also apparently shared a similar trait with the white rhino, being described as “so stupid that it could easily be knocked down with a stick.” 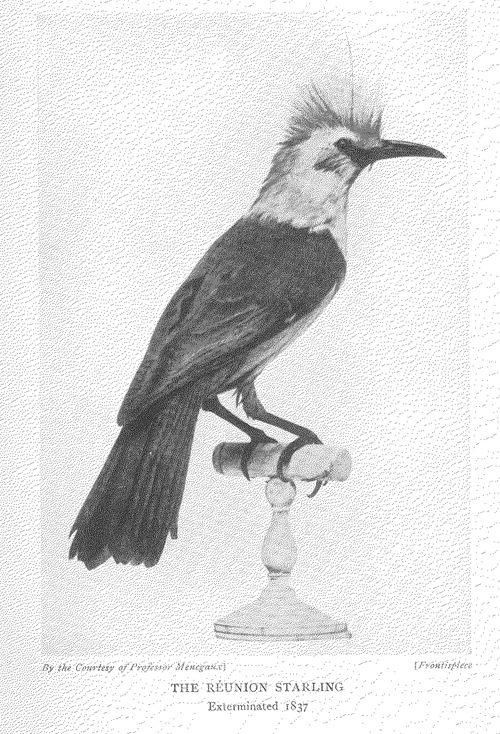 A sketch of the Réunion starling, from Renshaw’s 1922 article.

Renshaw’s article opens with a statement about the uniqueness of island species, and the frequency with which these species go extinct.

This issue – of the extirpation of island endemics – remains the focus of much conservation work. In the case of the Réunion starling the cause of their extinction was, as Renshaw put it, “an ornithological mystery,” although he suspected that competition with an introduced species (myna birds) or overharvesting may have played a role.

Apportioning blame to the myna sounds plausible: this species is one of only three bird species to have made it onto the list of the 100 most invasive species, as drawn up by the Global Invasive Species Database.

In other instances, the reasons for the decline in island endemics are known before they go extinct, providing conservationists with the opportunity to intervene before it is too late.

Oryx (as FFI’s journal is known today) is one channel used by researchers to publicise their findings regarding species endemic to islands, often in the hope of supporting the work of practitioners to protect such species. Thus in 1991, a paper in Oryx raised the alarm about West Indian racers in the Western Antilles. 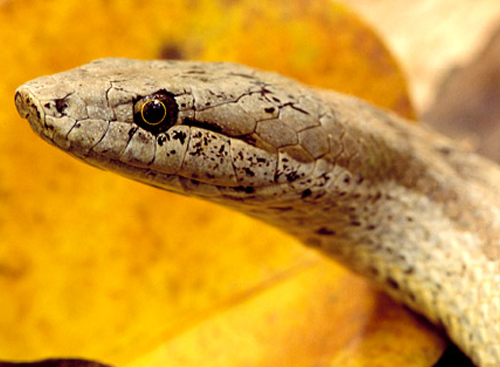 One of these snakes, the Critically Endangered Antiguan racer, became the focus of an FFI conservation project. Thanks to the eradication of invasive rats and mongooses from the islands on which it occurs, the racer has avoided the fate of the Réunion starling, and today numbers nearly 900.

Part three in this series (1924-1933) will be published at the end of March 2013. To browse through all material relating to FFI’s 110th Anniversary, visit our dedicated page.