There’s a certain symmetry to be found when comparing the origins of Fauna & Flora International (FFI) in 1903 and the organisation’s conservation work in 2013, because at either end of this 110-year span lies conservation in Sudan.

Today, FFI works alongside the government of the world’s newest country, the Republic of South Sudan, to support the development of conservation in the country, but it was another proposed boundary change within Sudan that spurred FFI’s founders into action.

In 1903, a group of naturalists in Britain were alarmed to hear of plans to discard an excellent game reserve to the north of the Sobat River and substitute it with an inferior area to the south. As revealed in one of the first issues of FFI’s journal (then called The Journal of the Society for the Preservation of the Wild Fauna of the Empire), the group believed the proposal posed grave risks to the game in the area. 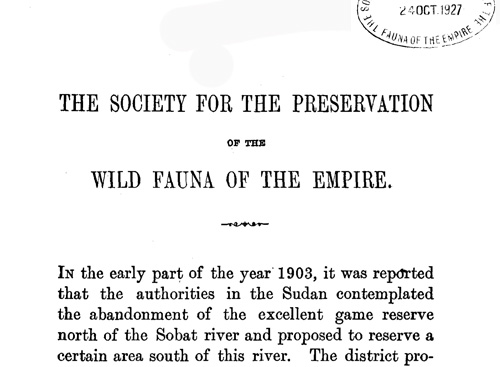 An article on FFI’s origins, from one of the first issues of its journal.

In a letter to the British Consul General in Egypt and the Governor General of Sudan, the group expressed their concerns that “if this change is made…in our opinion the disappearance of the game would be only a question of time.”

Furthermore they added that the remoteness and inaccessibility of the new area would make it hard to monitor, “thus the constitution of such an area as a reserve would be merely nominal, and would have no effect, one way or the other, on the preservation of the game.”

The upshot of their lobbying was not only the abandonment of the plans to fragment the reserve, but an increase in its protection. Buoyed by this success, the group decided that, “it seems desirable that those who have taken an interest in the matter should continue to act together.”

Following a meeting held on 11 December 1903 at the Natural History Museum in London, The Society for the Preservation of the Wild Fauna of the Empire was born, aiming “to further the formation of game reserves or sanctuaries, the selection of the most suitable places, and the enforcing of suitable game laws and regulations.”

The cost of joining the Society in 1903 was 10 shillings per annum, specifically to cover the cost of printing. So, what did members of the Society get for their annual payment?

The early issues of the Society’s journal provided its subscribers with a strong dose of utilitarianism as the rationale for protecting species. The relationship between a particular species and animals hunted as game by sportsmen played a significant role in the perception of the species in question. Thus, the African wild dog (now one of the focal species of FFI’s work in Mozambique) is described as exercising a wasteful method of hunting, comparing unfavourably with lions and leopards, which “use every precaution to prevent the meat becoming the property of the professional scavengers of the forest.” 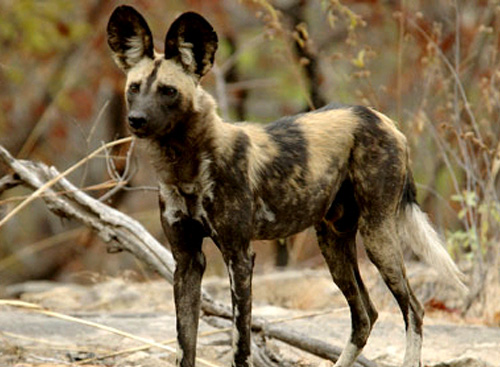 Current conservation practice has moved far beyond this anthropomorphic view: in some cases these ‘professional scavengers’, themselves now threatened with extinction, are the subject of direct conservation initiatives.

Readers of the Society’s journal were also treated to some fairly sensational stories, such as H. Walbeeter’s article from 1904 called ‘In the lion’s jaws’. Mr Walbeeter’s story, in which he fights off a lion using his sheath-knife, is a far cry from the articles published in FFI’s current journal, Oryx—The International Journal of Conservation, although conflict between people and wildlife, particularly carnivores, still features frequently in Oryx’s pages. 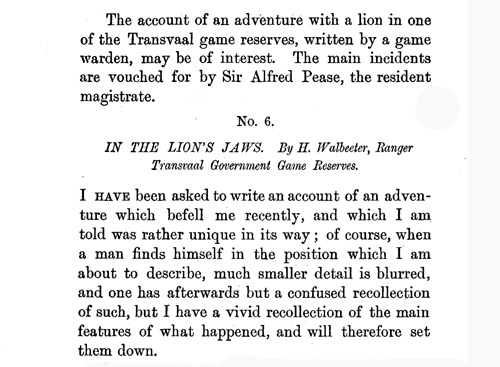 In 2009, for example, Oryx published a review of human–carnivore conflict between 1979 and 2007, in which the authors state that “the majority of attacks on people occur when they venture into felid habitat,” which is presumably what Mr Walbeeter was doing when he was attacked in 1904.

A subsequent article in the 1904 issue mentions that game regulations brought in at the start of the 20th century were proving successful in protecting elephants in Uganda, but that the elephant population was starting to damage crops – a story that still resonates with conservation practitioners today.

These first issues of the Society’s journal paint a picture of a vanished world, with early member lists for the Society recalling an age of gentlemen’s clubs (Brooks’s Club seems to have been the FFI members’ club of choice, although White’s was also popular).

However, links between modern conservation and that of this bygone age extend beyond Sudan. The spirit of collaboration – first seen in the formation of a group of people determined to protect wildlife in African reserves – still courses through FFI’s arteries.

The October 2012 issue of Oryx, for example, features a selection of articles on FFI’s marine work in Aceh that were written jointly by FFI staff, local partners and academics.

More broadly still, the continuing emphasis on partnership drives FFI’s conservation work today, enabling the organisation to support effective conservation wherever it works, including in the nascent country of South Sudan.

Part two in this series (1914-1923) will be published at the end of February 2013. To browse through all material relating to FFI’s 110th Anniversary, visit our dedicated page.