The idea took shape over a beer with the boys to celebrate a tiger trader meeting his nemesis in the form of a Tiger Protection and Conservation Unit (TPCU) investigator and the subsequent successful law enforcement operation with local police.

But ‘Nemesis’ was pensive. The trader had been arrested, but experience had shown us that – while the suspect would go to prison – the follow up investigation to find others in the poaching network would go nowhere fast.

The arrest was conducted in one province adjoining Kerinci Seblat National Park, the trader came from a second and, we suspected, the tiger had been poached in a third of the four provinces bordering the national park.

Faced with liaising with two other provincial police authorities hundreds of kilometres apart, the police case compiler would, perhaps not entirely surprisingly, throw his hands in the air and focus on doing his own local job.

The poachers would be off the hook, albeit tremulous for a few months, while the big-time illegal wildlife dealers in a fourth or even fifth province of Sumatra – the ones actually sourcing tigers and pangolins through local agents – would shrug the case off as a minor supply-side inconvenience.

“We only get the local actors,” sighed Nemesis, “never the puppet master.” 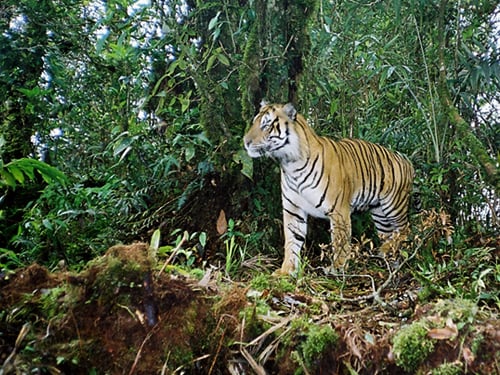 And he was right of course. Organised wildlife crime has reached Sumatra. The semi-opportunist, forest edge hunters and local villains who dealt tigers ‘on the side’ have been replaced in recent years by highly-organised illegal poaching and trade syndicates, working across provincial borders to supply the international black market.

To take down the networks from poacher right through to main dealer, we needed to get park-edge district and provincial police authorities working more effectively with the park staff and, perhaps even more importantly, with each other.

In short, we needed to get people networking. But, because these are government officers from different agencies, we had to do it by the book…even if this book had not yet been written.

And so it started. Facilitated by Fauna & Flora International (FFI), the park director began meeting with provincial police chiefs – powerful men responsible for law enforcement over areas bigger than some European countries. One by one they gave The Nod to form a new law enforcement network. But they all wanted to collectively discuss and agree the details of the network and its legal structure.

Getting the ball rolling

And so, first, a pre-meeting to advance an idea that by now had a name: the Serious Wildlife Crime Law Enforcement Network. Provincial police, lawyers, and detective chiefs; the splendid pak Luky, who leads the Indonesia Criminal Detectives (BARESKRIM) Environmental Crime Unit; the recently appointed director of the Forestry Department’s Forest Crimes Directorate, pak Johann; and many more came together to take the idea forward.

This initial meeting produced some unexpected and rapid bonuses for species conservation: one of Indonesia’s major airports now has a permanent forestry law enforcement presence, for example, which means that wildlife smugglers can be immediately arrested and not just scarper, as was the case previously. This, simply because two very senior forestry and police officers were able to sit down and talk about issues of mutual concern.

A few weeks later, came the formal meeting. There was more gold braid in one place than the average State Opening of Parliament, with four provincial police chiefs, top detectives and legal advisors, the Director General of Indonesia’s Department of Forest Protection and Nature Conservation, the head of Indonesia’s National Criminal Investigation division, myriad representatives from Sumatran national parks and other Forestry Department leaders. And alongside them were pak Darmawan, FFI’s Indonesia Director, and me.

Eventually, with a flourish of pens on vellum, Indonesia’s first Wildlife Crime Law Enforcement Network, spanning four provinces of Sumatra island, was legally established. How I wished that ‘Nemesis’ could have been with us as the Deputy Head of Indonesia’s national police stressed that an overriding goal of the network was law enforcement against not just the local players but the intellectual actors behind wildlife crime. 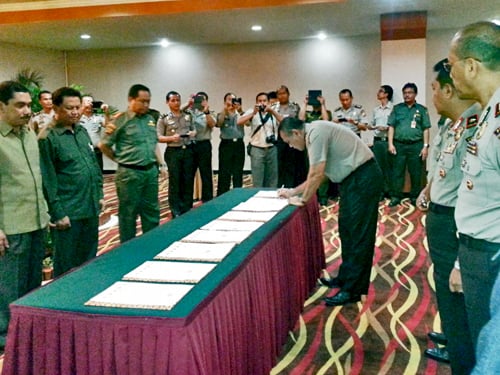 I also heard the Director General of Forestry advise that the new Minister of Forestry and Environment had been briefed – and fully supported – the Network and that similar ones should be established elsewhere in Indonesia.

With a little help from our friends

One of the great things about this initiative is that it didn’t require a big, complicated grant – it was made possible thanks to the support of FFI members and smaller foundations who regularly help the tiger team here in Kerinci.

Yes, that means you Mrs Cooper, as well as your friends at Dilston College and the people of West Tynedale, so please thank everybody at your next Tiger Tea Party or Tombola. And you, Mr Tibbitts. And you, dear Liz Bellward and Karma Cats; you the splendid Francis Wildlife Charitable Trust, and you, the Leonard Bosack and Margaret Kruger Charitable Foundation.

And all the rest of you – I hope you know who you are. It may be ‘only a tenner’, it might be much more, but now you can see how it all helps!

We haven’t won, not yet anyway. But the playing field is now a little more level.