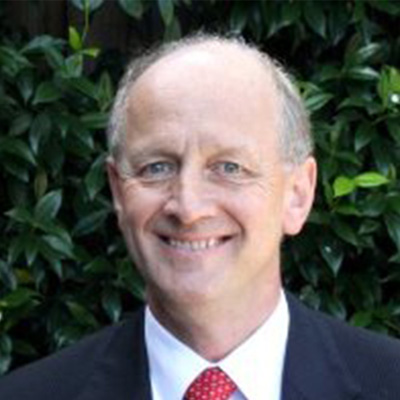 Mike retired from PriceWaterhouseCoopers after 35 years, giving him the time to follow his passion for the natural world. Mike graduated from Oxford University with a Masters in Natural Science and Botany and his time with PriceWaterhouseCoopers included six years working in Papua New Guinea, helping locals develop their business skills. He remains a keen traveller, joining the Board of FFI Australia in 2012 with the hope of seeing a number of FFI’s projects at first hand, and taking over as Chair of the Board in 2016.

Having recently joined Fauna & Flora International (FFI) Australia’s Board of Directors, I jumped at the opportunity to be part of a visit to Queensland, to dive with grey nurse shark (GNS) expert, Carley Bansemer, near Fraser Island.

The weather was a little wild as we set off from stunning Rainbow Beach but the gruff reassurance of ex-navy seal dive master Kevin instilled a sense of adventure and excitement which grew as we neared the dive site.

FFI’s support for this project helps enable Carley’s research which involves collecting data on the migration routes and breeding cycle of the shark. While grey nurse sharks are ferocious-looking animals, they are no man-eaters and grow to just over three metres in length. The east Australian population of the GNS is listed as Critically Endangered under the IUCN’s Red List of Threatened Species. 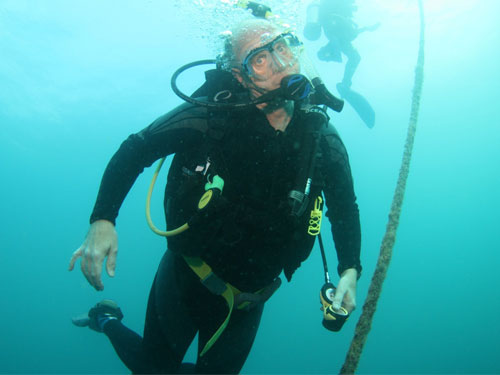 Despite many years of research and management little is known about this iconic species and we urgently need to monitor their recovery and ensure key areas are protected for their survival. Using Geographic Information System technology, 200 sites sharing similar parameters and habitat to known aggregation sites (where populations gather to feed, mate, gestate and pup) have been identified and prioritised. Wolf Rock currently supports half of the pregnant female population and is the only aggregation site known where females gestate before returning to New South Wales to pup. Locating and protecting aggregation sites is pivotal to the survival of the species. What is currently unknown, and of critical importance, is where the other pregnant females aggregate – a gap it is hoped this project will fill. 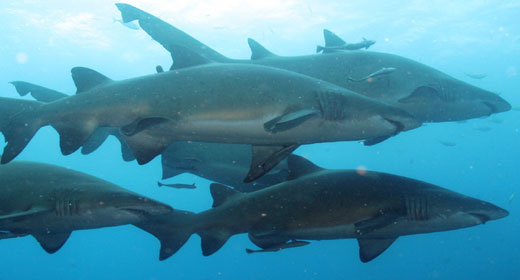 Rather accommodatingly, each individual shark features unique spot patterns, making photographic identification an ideal way to differentiate between individuals. Photographs submitted by volunteers contribute to a national database on the grey nurse shark, operated by Reef Check Australia, which is available to all stakeholders, researchers and managers and which currently boasts around 950 identified sharks.

We were incredibly lucky on the day of the dive and enjoyed visibility of up to 10 metres. Conditions in Queensland during the first half of 2012 have been very poor indeed, which has hampered efforts to monitor the population – a common complaint in marine field work. My heart raced as I watched these amazing creatures glide silently past. It was a truly amazing experience and one I would highly recommend to other amateur divers.