Kerinci Seblat National Park is one of the last remaining strongholds of the Critically Endangered Sumatran tiger, harbouring around 170 individuals out of a total population estimated at just 500.

In this context, the undercover investigations and regular forest patrols undertaken by the anti-poaching Tiger Protection & Conservation Units (TPCUs) are crucial to the survival of Indonesia’s last remaining tiger subspecies. 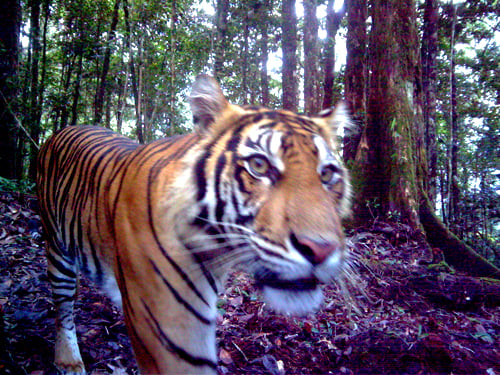 One of the main threats to Sumatran tigers is poaching.. Credit: Matt Linkie/FFI

Then he asked her again. And again. Eventually, he realised that her emailed excuses spoke volumes.

Here are the edited highlights of Debbie’s frantic notes from the field.

Was about to start on your article, but unfortunately…

At first we wondered if it might be murder, mocked up to look like a tiger attack (we’ve had two such cases in the last few years), but after seeing the pictures we think it definitely is a tiger attack.

The victim was an illegal logger working alone. Squatted down to fix his chainsaw and the rest is history. Two tigers, apparently.

We met the tiger victim’s widow and family today. They live in a tiny plank house. Really poor. Nobody has been to see them except us. Astonishingly, victim’s father was also killed by a tiger back in the late 80s. Lightning does strike twice.

Meanwhile…the Bengkulu TPCU headed to a protected forest south of the park where a tiger was reported snared, but still alive.

The snared tiger safely evacuated, but we found lots of encroachment to plant of coffee. I wish people back home would start demanding to know the source of their coffee. The coffee boom is coordinated too and big bucks.

Tiger will be moved tomorrow to Taman Safari in Bogor. It wasn’t just snared, but repeatedly stabbed with spears. 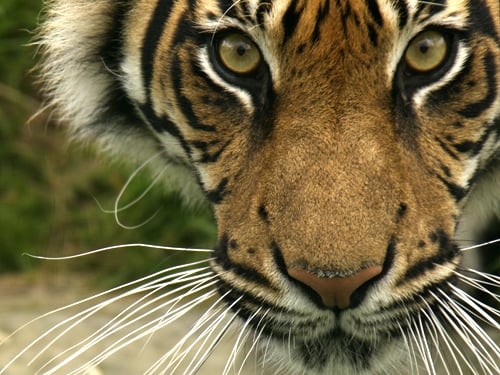 Only around 500 Sumatran tigers remain in the wild. Credit: Evan Bowen-Jones/FFI

We had another reported tiger attack two days ago, with local politicians alleging that the park is deliberately releasing problem tigers. Given how hard everybody has been working, I feel like borrowing a genuine problem tiger and releasing it in the local parliament building, but of course that wouldn’t be fair to the tiger!

Subsequently transpired it wasn’t a tiger. I guess the rubber tapper thought it would be a better story than being attacked by a wild boar. 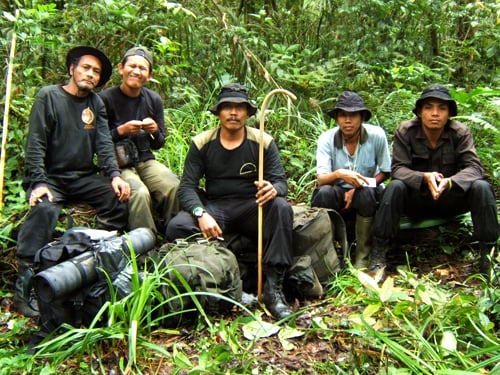 Rangers from one of the TPCUs take a well-deserved break during a forest patrol.

You won’t [expletive deleted by Editor] believe this…

Unit Four got out last night. All ok. But this evening the Unit Two leader radioed in to report finding active snares. Plus snared tigress. Alive!

Team coordinator Pak Nur and veterinarian Dr Yanti are organising the vet kit for rescue and evacuation. Other teams in the field have been instructed to get themselves out of the forest and to pick up points. 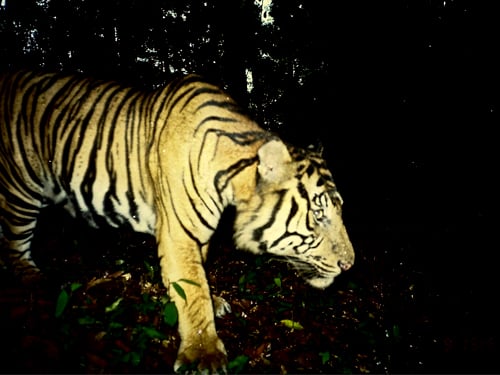 Update for you. Pak Nur, Dr Yanti and the rest of the rescue team are on site, deep in the forest.

Thank goodness we have anaesthetics, blowpipes and stuff for this.

Two units are clearing a trail out to nearest dirt road. Tigress has been anaesthetised and put in a temporary holding cage built by the boys.

Finally…nine days after finding the snared tigress, rescue and evacuation completed. Boys triumphant at doing good job, but depressed as there’s no way she will ever go back to the wild.

Seven active snares destroyed as well as the one that got her. There was a second tiger in the area, so it’s lucky we got those snares.

I’m a bit distracted, because ‘Lubuk Mentilin’ [code name for suspect] has contacted Sudirman [working undercover] and says one of his gang of poachers up in Jangkat has caught a tiger.

We are pretty certain his gang is responsible for low tiger densities in this area of the park.

Dian [field manager] has teams in forest watching the footpath where Lubuk Mentilin has arranged to meet Sudirman. Also watching points along road from Bangko to Merangin. I’m in Jambi, on tenterhooks!

News! Poacher arrested with evidence (a tiger skin). Team now waiting for Lubuk Mentilin to show up. Looks like he sent the poacher through the forest, while he heads to the meeting place by the road.

Dian was right to place monitors along the inter-district highway too. In the end they arrested Lubuk Mentilin and the poacher as well as a village headman. 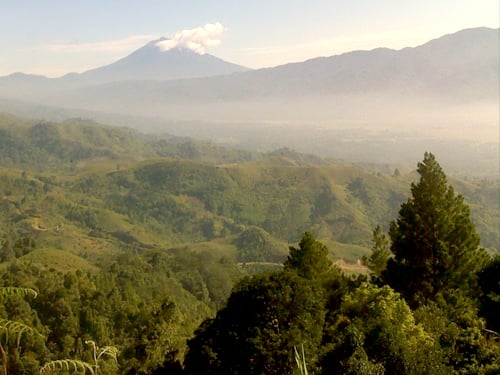 The last two days have been a bit difficult. Got a phone call reporting a tiger caught in a pig snare in farmland at the far south of Kerinci valley, but there’s no petrol in Kerinci! Well, not at petrol station anyway.

Jai (one of the patrollers) went up a tree and waited to get a clear shot with blowpipe…then the tiger broke loose from the snare anchor.

Cue panicked shouts of “tiger free,” followed by sight of his support team ascending tree to join Jai. The tiger then moved deeper into the scrub and the boys came down out of the trees.

Gave up as dusk fell. Dian requested back-up from KSDA [Natural Resources Conservation Agency] – they have a dart gun, which has a bit more oomph than blowpipe.

Back early next morning…Jai and the KSDA guy went in with local army bloke as backup (with a huge gun). Silence, then a loud bang.

Everybody went in to help carry out the darted tiger. I didn’t follow, as I had a feeling the loud bang was not KSDA dart gun but something quite different. This was confirmed by sight of the tiger team, KSDA, army guy and district vet all climbing trees.

The gunshot was our army friend warning off the tiger as it tried to strike up close acquaintance with Jai. Tiger finally darted two hours later and evacuated to Jambi, but there are currently no safe relocation sites around Kerinci, due to access problems or existing tiger densities. 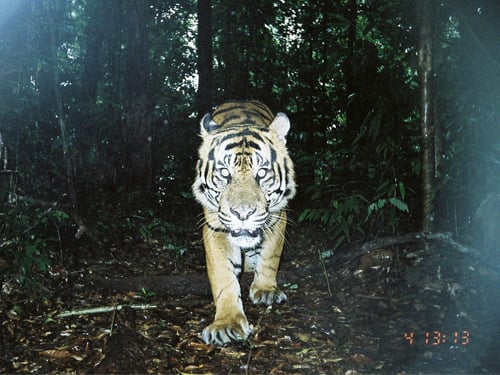 Sumatran tigers are the smallest of all the tigers, its stripes are narrower than in other tiger subspecies and it has a more bearded and maned appearance. Credit: FFI

I may have slipped a bit on the timing for your article…the Great Kerinci Snare Sweep is under way. So far Jai’s team is in the lead for the most (deer) snares destroyed by an individual TPCU.

Noticed M [cover name to conceal identity] being even quieter than usual, so I cornered him and found he is following up information on two poachers seen in another park-edge district. Using his investigation data, a team destroyed nine tiger snares.

All teams have also been getting wildlife emergency veterinary response training and building a database to support anti-poaching work.

Did I tell you, sentence has been passed on the men we arrested? All three got custodial sentences of two and a half years. 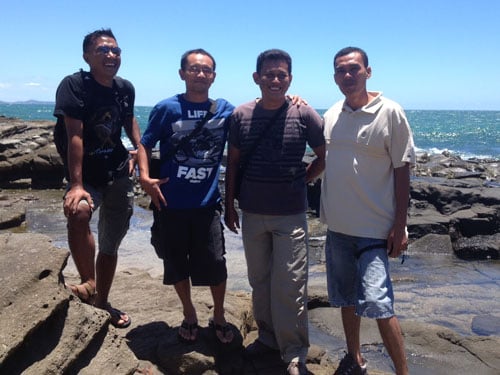 Tiger rangers visit the beach in Queensland, Australia – the first time any of them had been abroad. Credit: Mark Turner

Guess what! Four of our rangers are going to Australia thanks to Giles and his team at Australia Zoo – two TPCU national park ranger leaders and two of our longest-serving TPCU community rangers.

Andi was utterly gobsmacked. His jaw dropped and he said, “Never, never have I dreamed something like this.”

Amazingly, unbelievably, passports and visas sorted and Andi, M, Jefri and Seven X are off to Australia, flying tonight from Singapore.

Sixth TPCU almost up and running, so there will be three TPCUs active to the east and west of the park. New faces, new ideas.

In spite of those emergencies earlier in the year the boys still covered over 1,300 km on patrol, recorded at least 55 tigers and destroyed 20 active tiger snares, almost all found on intelligence-driven patrols. Not to mention three big tiger rescues and some of our dedicated rangers in Australia.

Edited extract taken from the June 2013 issue of Fauna & Flora magazine. You can receive our magazine annually by joining Fauna & Flora International today.

With field teams reporting a spike in the number of tiger snares in Sumatra, we urgently need your support to help us protect wild Sumatran tigers against this serious threat.