At 2,000 metres above sea level, surrounded by mountains and tropical forest, the weather at camp can be unpredictable.

Tonight thick clouds spill over the crater rim and the rising moon is haloed by a huge circular spectrum – a ‘moon ring’ or 22° halo – formed by light refracting from ice crystals high in the atmosphere. The temperature drops rapidly and we all suffer a frigid and sleepless night. 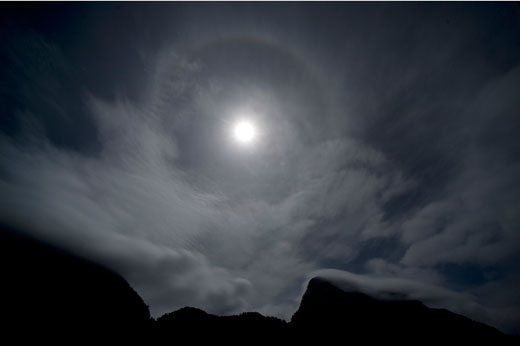 A moon ring over the crater rim at Gunung Tujuh. Credit: Jeremy Holden/FFI

In the two months since I was last here heavy rain has fallen. The vegetation has run riot and the paths are muddy. I can see from the churned-up trails that pigs have arrived. In four months of camera trapping we have not recorded a single pig.

In any other area of the park this would be very unusual. At this altitude, however, pigs appear to be rare. This kind of information is what we hope to learn from this high altitude camera-trapping programme.

The fact that there are many pig footprints suggests that this is a migration event.

Within tropical rainforest, pigs, especially the larger bearded pigs, Sus barbatus, constantly migrate, covering vast distances. I suspect that these signs may be from bearded pigs. If so this will be the first record from Gunung Tujuh.

Even the local guides are not familiar with them, at least not from forest at this altitude. But it doesn’t mean that they don’t travel here.

In Sumatran folklore the bearded pig is known as lumba lumba, the same name used for dolphin.

This is no coincidence. In the past, when the pigs arrived in an area, they came through in large herds, crashing through the forest when disturbed like pods of breaching dolphins. Then mysteriously, as quickly as they came, they would be gone.

In 18th Century England, Gilbert White explained the disappearance of swallows in autumn with the notion that they enter a torpid state. Others thought they hibernated underwater in reed-fringed lakes.

In Sumatra, the belief for bearded pigs was similar: after moving through the forest they traveled to the sea and became dolphins. Clearly this is not the case, but the movements of bearded pig remain a mystery, and a detailed study is long overdue.

Learning more about the movements of bearded pigs is essential for more than simply satisfying our curiosity. In mainland Malaysia, for instance, bearded pig numbers have crashed.

This is probably because of habitat fragmentation causing forest blocks to become smaller and isolated, and in consequence unable to support the large numbers of pigs that formerly used them.

With their old migration routes compromised, and known food sources now destroyed or unreachable, it seems that bearded pigs are disappearing across their former range.

In Sumatra bearded pigs are still relatively common, but if the trend in habitat fragmentation continues they will start to vanish from these forests, too. 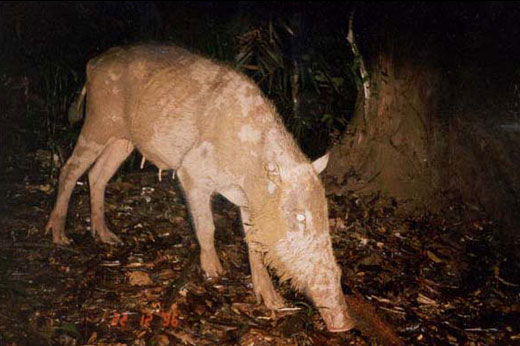 A bright morning filled with gibbon song and the metallic calls of Sumatran treepie, a bird endemic to these mountains.

We set off from camp early to check the camera traps.

In front of one camera we find huge cloven hooved prints, too large for anything but an adult bearded pig or a sambar deer. I suspect the former and am delighted when we check the memory card to find footage of a huge bearded pig.

On other cameras we record a pack of wild dogs, or dhole. This is another unusual species at this altitude and clearly the dholes are here because the pigs are here.

The pigs are not only a vital prey species for predators such as dhole and tiger, but also important for a healthy functioning rainforest. When the pigs come through an area of forest they plough up the ground in search of food, helping to aerate the soil and aid with the germination of new seedlings.

As with many of the complex relationships between species in the rainforest, we still know little about the role that bearded pigs play in the ecosystem. I suspect in this case their disappearance will have many repercussions, not least for predators like dhole and tiger that feed on them.

This pack of dhole were also captured at Gunung Tujuh in Kerinci Seblat National Park.