Standing up for snakes

Ever since Genesis snakes have had a bad reputation. Even before that was written, the ancient Egyptians had snakebite remedies, and Cleopatra, so the story goes, committed suicide by serpent.

Snakes hold a deep fascination for people for both their perceived danger and strange beauty. The inexplicable and seemingly magical way in which a snake moves, and those inscrutable lidless eyes, have given them a status as something beyond a mere animal. They have entered the realm of myth in many cultures; symbols for fertility, virility, or the umbilicus that connects humans to the Earth.

The Biblical serpent deceiver of Genesis becomes the apotheosis of evil in Revelations – a limbless scaled Satan. For latter day scholars of the human condition they were equally important. Freud saw the snake as representing the sexual drive; while for Jung the snake in dreams personified the conflict between the conscious mind and the instinct. But he also saw the snake as symbolic of the great wisdom of nature. For most people on the planet, snakes are simply something to be avoided. 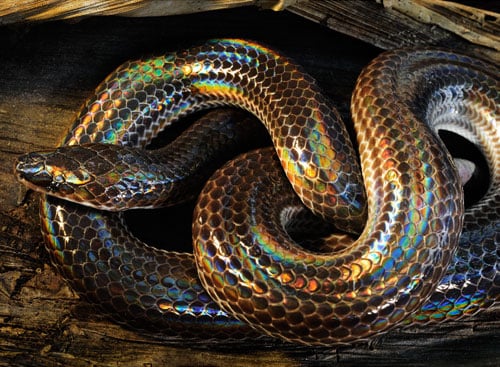 A common species around villages, the sunbeam snake is beautiful and harmless. Nevertheless, it is usually killed on sight when found by villagers. Credit: Jeremy Holden/FFI

It is true that snakes can be deadly. About 15% of known snake species are venomous, or at least venomous enough to produce effects in humans. The World Health Organization quotes a figure of 95,000 to 120,000 deaths, 400,000 amputations or other serious health factors per year due to snake envenomation. These occur mostly in rural communities, and help to explain why snakes are usually killed on sight, regardless of the potential danger.

But those of us that know snakes more intimately realise that the bad rap is often an unfair one. Part of my job photographing wildlife involves finding and sometimes catching snakes. In Sumatra, for instance, there are some 140 species recognised. They are found everywhere. We had one in the kitchen cupboard once, and I have seen them sliding silently around the house on occasion. But for the most part snakes are secretive. They come into contact with people only by accident. Most snake bites occur when a barefooted villager treads on a krait along a path, disturbs a wood pile in which a cobra is resting, or fails to spot a camouflaged green viper in a bush he is cutting. 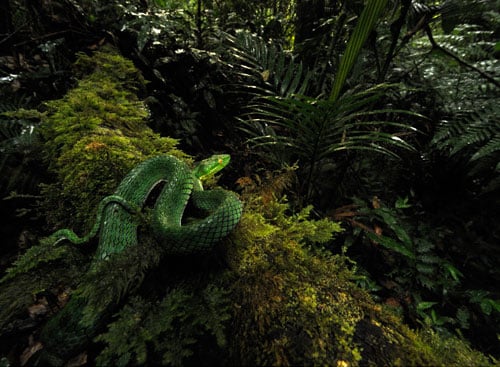 A well-camouflaged pit viper can be difficult to spot. Credit: Jeremy Holden/FFI

As part of the biodiversity of a place, snakes are something I seek out. In the tropics, despite the diversity of species – and the probable high density of individuals – snakes can be very difficult to find. Their cryptic colouration makes them hard to spot, and they quickly vanish if they sense they are being approached. Plus, most of them are strictly nocturnal. Nevertheless, I feel lucky to find even one snake on a night’s search. I can also vouch for the general good temper of most snake species (not all – I have been bitten numerous times by the spindly but pugnacious vine snake) and how much provocation it takes to make most snake species disturbed enough to be aggressive.

One reason I feel obliged to stick up for snakes is that things could have worked out very differently for me were snakes as malign as people fear. One evening in Sumatra I was walking back through the forest after spending 11 hours in a hide trying to photograph birds. I was tired and not paying attention so didn’t notice a king cobra stretched across the narrow track. The king cobra is the world’s largest venomous snake. As venom goes it is not the most potent, but the sheer volume of venom injected means that a bite from this snake results in death for anyone unlucky enough to be bitten. I didn’t notice the snake (a relatively small one at about 3 metres long) until I was mid-stride over it. The snake saw me at the same time I saw it, and made to rise up into its usual threat pose. However, as I was already straddling the snake, it hit my leg and curled round my thigh like a living example of the Rod of Asclepius. At this point I realised I was in contact with a king cobra. It happened quickly: the snake reared up and butted me in the stomach. It was definitely a head butt, not a strike.

At the time I thought that this was a consequence of my forward momentum and the snake’s upward movement. The cobra had vanished by the time I hit the ground. I considered myself very lucky. It was only years later that I learned that king cobras will head butt instead of bite if they sense that it is an accidental encounter. They are, after all, credited as being the most intelligent of snakes and have no desire to waste their precious venom on something that they don’t intend to eat.

I always think of that snake when I see king cobras curled dead in jars of rice wine (a common sight in Vietnam). The cobra had the wit to realise I was not a threat, just a bumbling passerby. And yet, most human/snake encounters end up quite differently for the unfortunate snake, even the harmless rat snakes that helped clear our Sumatran kitchen of rodents. Could it be that the king cobra is in fact, if not more intelligent, then more compassionate than the average human being? 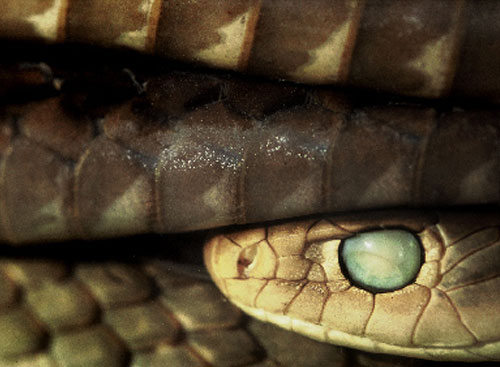 One of the reasons I was initially attracted to FFI is that it is the kind of conservation organisation that also recognises the importance of the smaller and more maligned creatures, such as snakes. I doubt that it is easy to raise money for snake conservation, but yet FFI’s project with the Antiguan racer in the Caribbean has brought this endangered reptile back from the brink. That success has lead to a new initiative to work the same magic on the island of Saint Lucia for the Saint Lucia racer – perhaps the rarest snake on the planet – and the diminutive Saint Lucia thread snake – the second smallest snake on Earth at only 108mm. Later this year a new FFI initiative will focus on the Endangered Anguilla Bank racer starting with a status assessment in Anguilla. 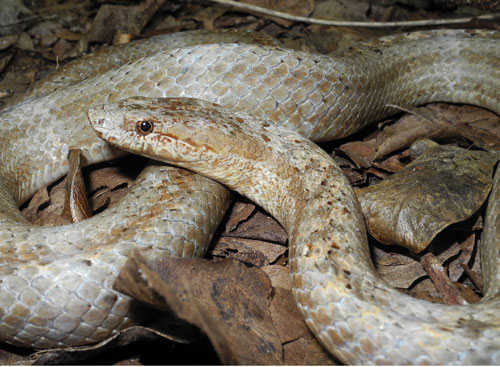 The Antiguan racer population has gone from 50 to over 1,000 individuals after concerted conservation work by FFI. Credit: Jenny Daltry/FFI

We have also supported a status assessment of the king cobra in India and Thailand, while the FFI Philippines programme helped protect the endemic Lake Taal sea snake.

In Southeast Asia, FFI’s Cambodia programme is making a habit of finding species of snake that are new to science. Survey work in the Cardamom Mountains has revealed a number of new snakes. On our first survey there in 2000 Dr Jenny Daltry discovered what was later named the Cardamom wolf snake; while last year our herpetologist Neang Thy discovered a striking new species of kukri snake, which he named in honour of his country. Currently, Thy is working on the descriptions of another two new species, and will probably go on to find many more before the Cardamoms are fully explored.

Perhaps the majority of people consider snakes as the enemy: dangerous, evil, loathsome even. But I cannot agree. As a life form, I consider snakes as having reached perfection; and like most manifestations of perfection they are simple and waste nothing. The snake stitches together the ecosystem like a thread through cloth: unobtrusive, beautiful, and effective: a symbol of the wisdom of nature indeed.