Softening the blow for hammerhead sharks and tropical hardwoods

What do spectacular sharks and a priceless tropical timber have in common? The answer is that they are in equally urgent need of conservation attention, and both stand to benefit from the intervention of the latest Conservation Leadership Programme (CLP) award winners.

The 2019 Team Awards are reserved exclusively for projects that focus on threatened tree or marine species in Latin America, supported by, respectively, the Global Trees Campaign and Arcadia – a charitable fund of Lisbet Rausing and Peter Baldwin.

This year, thanks to Arcadia, CLP will be supporting shark conservation projects in the Pacific Ocean and the Caribbean Sea, and the evocatively named hammerheads will feature prominently in both cases.

Using acoustic tags and receivers, a team of early-career conservationists from Tumbes will be trying to build a better picture of the seasonal movements of smooth hammerheads off the coast of northern Peru, in order to nail down which areas of habitat are most crucial to this shark’s life cycle.

Smooth hammerheads – predominantly juveniles – are frequently caught and sold by inshore fishers here, which has given rise to speculation that this region could potentially be a nursery site for the species. An eye-watering 8,700 tonnes of smooth hammerhead sharks were recorded in Peruvian artisanal fisheries between 1997 and 2013, a level of exploitation that is clearly unsustainable. As well as gathering data on hammerhead movements, the award-winning team will also be working closely with fishing communities to encourage a more shark-friendly approach to fisheries management in the area. 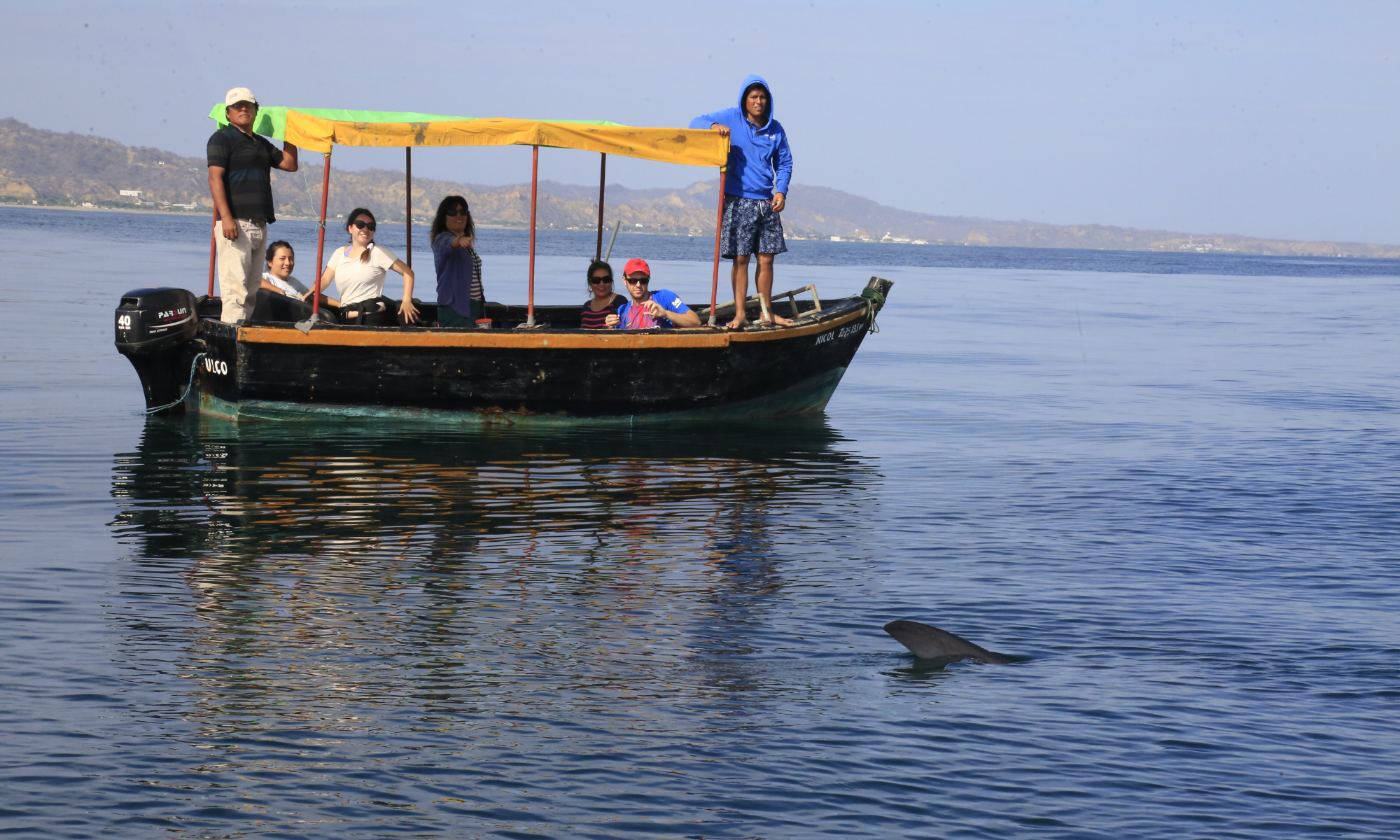 Members of the Peru team observing the telltale fin of a shark, in this case a whale shark rather than a smooth hammerhead. Credit: Patricia Angelica Zumaeta Torres

Project leader Claudia Ampuero was on a bus when she received the welcome news that her team had won an award: “I didn’t know what to do with so much emotion, whether to stay still or hug the stranger who was by my side. This is a great opportunity to develop our skills in what we love the most: sharks. We are eager to start!”

On the opposite side of the Americas, an award-winning team from Honduras will also be conducting vital research on sharks – including the charismatic but endangered great hammerhead – this time in the Caribbean.

The remote and widely spread archipelago known collectively as the Miskito Cays spans the territorial waters of Honduras and Nicaragua. Unlike the most southerly cays in Nicaragua – which have enjoyed nominal protection for decades – those in Honduran waters remain unprotected. 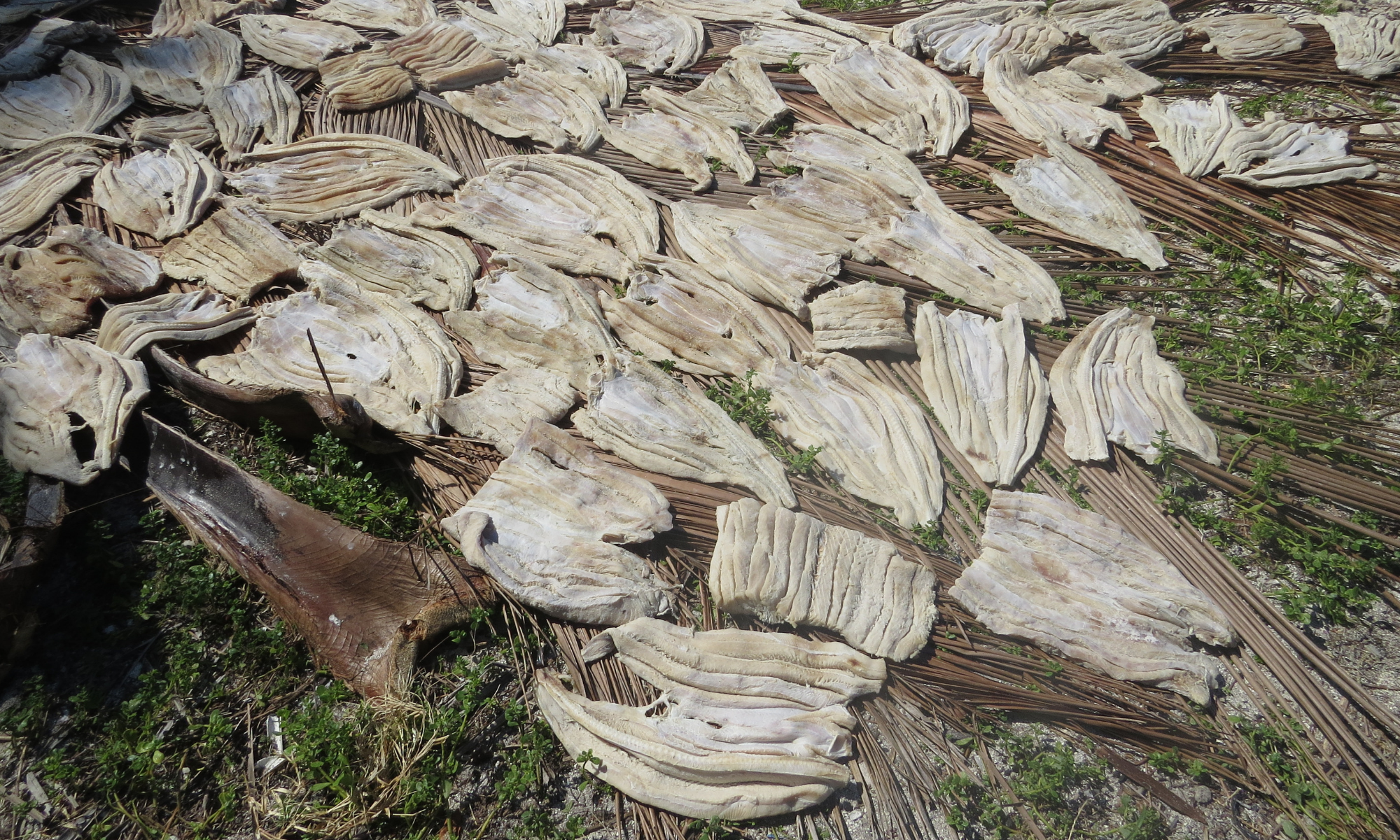 Although sharks were officially declared off limits in Honduras in 2011, this legislation has since been partially repealed to allow some artisanal fishing activity in the coastal areas of the Moskitia region. As a result, enforcement is problematic, so the wider shark protection measures lack teeth, meaning that illegal and unregulated fishing remains a significant threat, with hammerheads taking a particular hammering.

The CLP-funded project is aiming to gather more comprehensive data on shark abundance, distribution and density, which are urgently needed in order to help improve shark management. Crucially, the team will also work closely with indigenous groups with a view to increasing understanding of the importance of marine conservation and, it is hoped, changing local attitudes towards sharks. 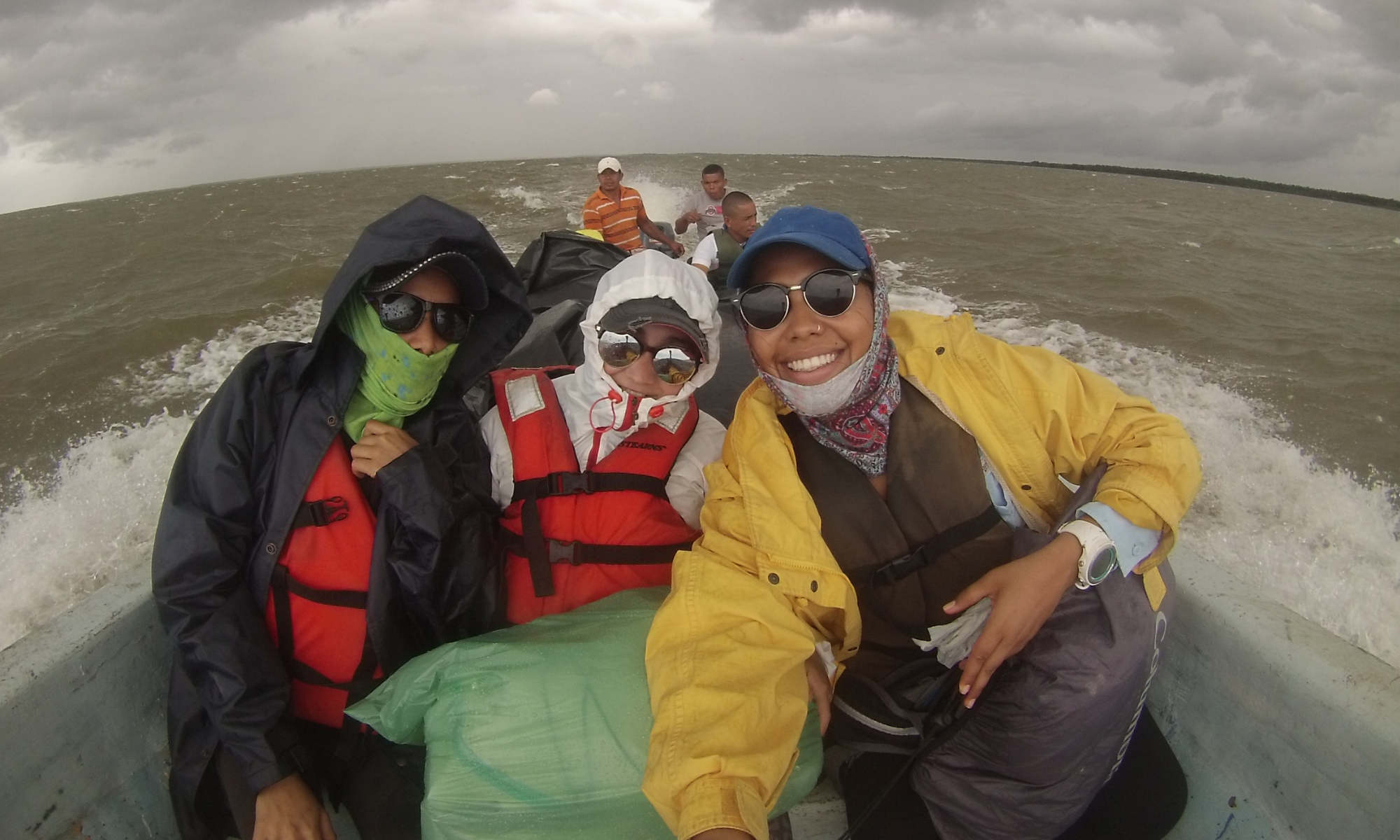 “I literally jumped off my chair as I read the email,” revealed team leader Gabriela Ochoa. “We are so happy to start this project in an incredibly remote and poorly known area, and work alongside fishers to improve management of sharks in the country.”

Courtesy of the Global Trees Campaign, CLP is also supporting tree conservation efforts in Guyana, a country that is part of South America but has strong cultural and political links with the Caribbean.

Greenheart is one of Guyana’s most commercially valuable timber species. Owing to the wood’s durability, it is highly prized by the construction industry and has been harvested for several centuries. Although also found in neighbouring Suriname, where it is confined to a very small riverine population, and possibly in western Venezuela (in which case densities there must necessarily be very low), greenheart is very much a Guyanese flagship. 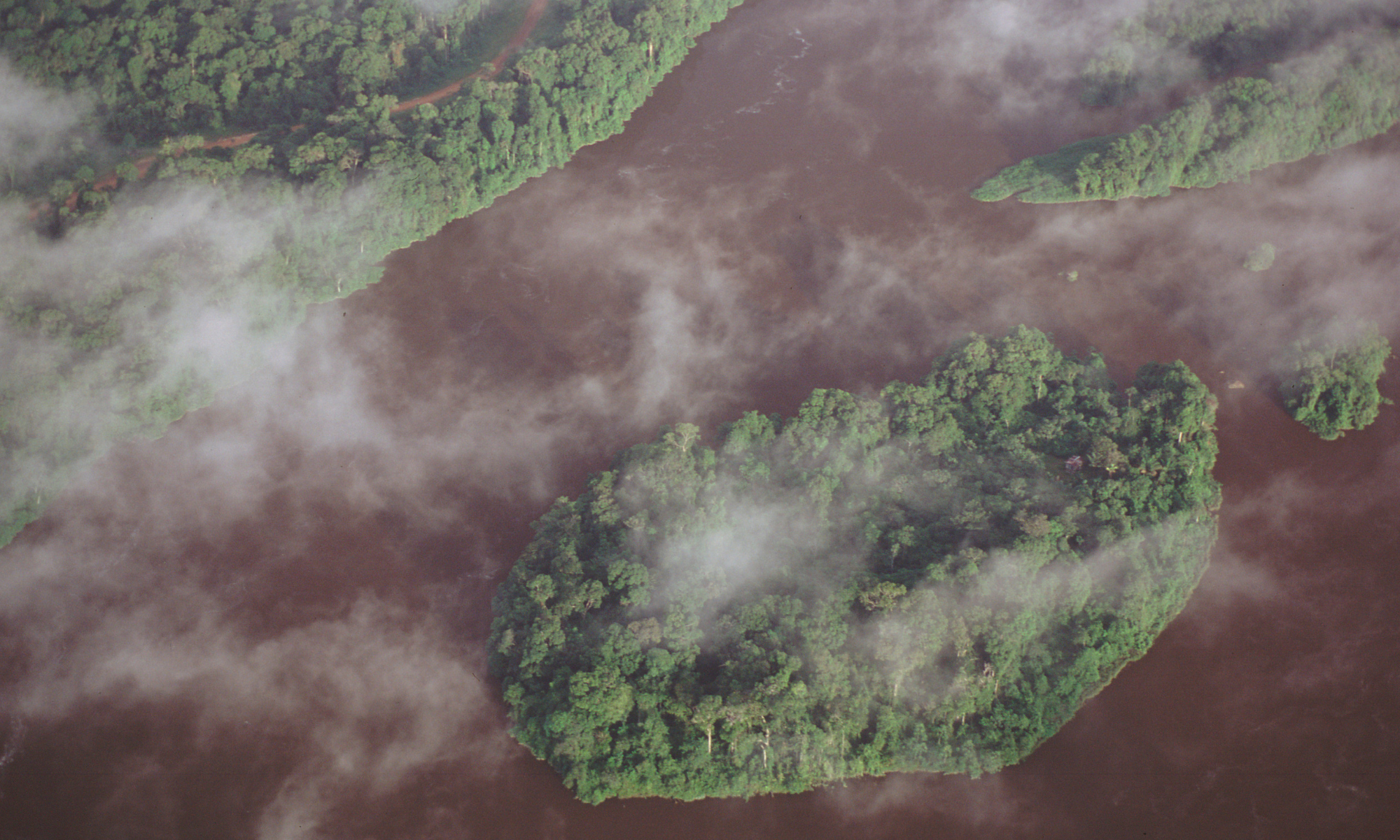 Greenheart is sometimes referred to as Demerara greenheart, after this major river in Guyana. Credit: Jeremy Holden/FFI

Although the species is currently listed as Data Deficient on the IUCN Red List of Threatened Species, there seems little doubt that overexploitation poses a very real threat to the tree’s continued survival.

With CLP support, the team is aiming to gain a better understanding of greenheart distribution and gather data to help determine its status and, ultimately, promote sustainable use and conservation of this economically and culturally important tree.

Project leader Sherica Isaacs described her reaction to news of the team’s success as “dumbstruck” and was quick to acknowledge the potential significance of this award, not just for the future of greenheart and for the career ambitions of her team, but also for tree conservation as a whole in her country: “This raises new horizons for forest management and conservation in Guyana.” 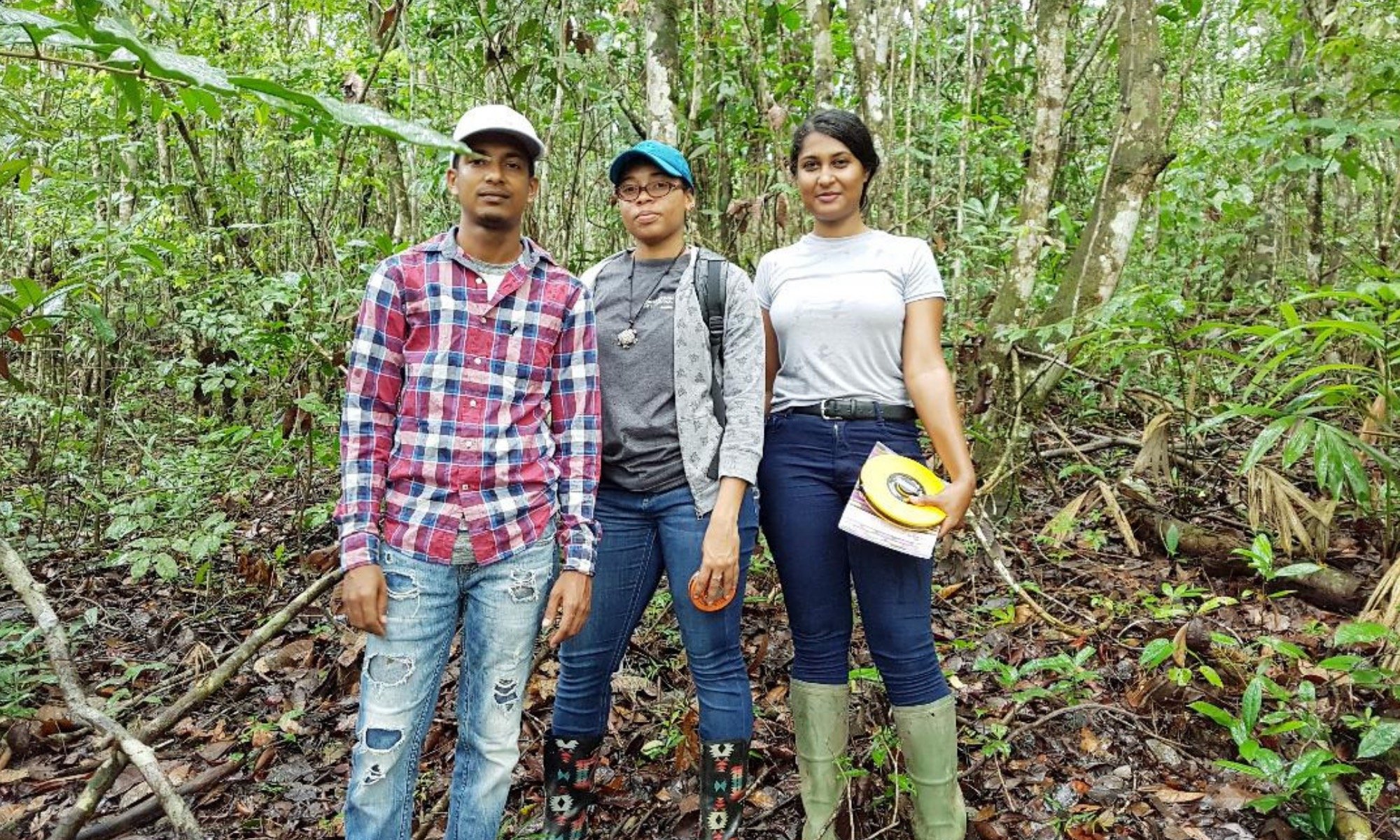 The award-winning greenheart team in the green heart of the forest. Credit: Jabaun Correia

CLP’s Executive Manager, Stuart Paterson, is acutely aware that more could be done: “Every year, we are faced with difficult choices. There are only so many projects that we can support, but we know that there are myriad other conservation projects in need of funding, and many other highly capable teams of young conservationists who, given sufficient financial and capacity support, could have a hugely beneficial impact on biodiversity across the globe.”

Details of these award-winning projects can be found on the Latest Projects page of the CLP website.

CLP is working to promote the development of future conservation leaders from developing countries, providing them with the skills and knowledge needed to address today’s most pressing conservation challenges.

Today, over 10,000 tree species are threatened with extinction, with more than 1,900 species listed as critically endangered. Find out how FFI is working to conserve our planet's threatened trees.