I recently hosted a delegation from the Mongolian government’s Ministry of Nature, Environment and Tourism (led by the Vice Minister, Mr Choijantsan Jargsalsaikhan) who visited Australia to study its biodiversity offset programmes.

The tour culminated in the offices of the New South Wales (NSW) state government department of Environment and Heritage, where officials presented a new ‘BioBanking’ scheme that enables landowners to generate credits through conservation efforts that are traded with housing, roads, construction and other infrastructure developers.

With its experience in a growing number of corporate partnership activities (which focus on measuring, implementing and managing ‘offsets’ from the impacts on biodiversity that are inevitable with all types of infrastructure, resources and transport development), FFI is interested in expanding its activities in Mongolia and elsewhere.

Strong links between the two countries derived through a shared interest in minimising the impacts of their resources and extractive industries, meant that there was much to discuss as the delegation toured universities, federal and state government departments, BioBanking farms, research institutes, natural science units and various NGOs.

FFI organised a visit to a farm participating in the NSW BioBanking scheme – the second such ‘BioBank offset site’ in the state – near Camden, about 60 km south-west of Sydney. The accredited BioBank assessor, Robert Humphries, who is Manager for BioBanking and Offsets Programmes with private consultancy EcoLogical Australia Pty Ltd., led the tour to the re-vegetation project. 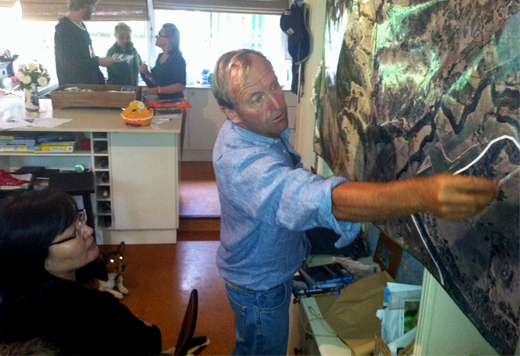 Farmer, Edgar Downes, pointing out the location of his BioBank offset site to Ms Ganjuurjav Erdenebayasgalan from the Mongolia Deparment of Environment and Natural Resources (photo credit: Jack Whelan, FFI).

The farm owner is removing invasive, non-indigenous species, and allowing the regeneration of natural vegetation in an area that has been assessed as a critically threatened ecosystem by the NSW government.

The NSW BioBanking scheme, which was established in 2008 as a voluntary, market-based offsetting and conservation scheme, is based on a transparent, repeatable and scientifically-based assessment methodology. It ensures a standard that ‘improves or maintains’ biodiversity, and has an administrative framework that delivers, secures and resources offsets.

The scheme is still in its infancy, with over 500 hectares designated so far supplying credits to developers, but over 60 expressions of interest have been received from potential BioBank sites with over 30,000 ha nominated for agreements. Over 80 BioBanking Assessors have been trained and accredited in the BioBanking Assessment Methodology.

The visit led to much discussion on the management of the BioBank Trust Fund, which is a key instrument in ensuring the landowner maintains the offset in perpetuity and receives the appropriate compensation.

The value, supply and demand of BioBank credits, which require close matching of either ecosystems or species credit criteria in both clearing and offset sites, was also studied in detail. Different schemes operate in other Australian states, but there is growing interest to introduce a harmonised nationwide programme.

FFI Australia board member, Associate Professor Luca Tacconi (Director of the Asia Pacific Network for Environmental Governance, Crawford School of Economics and Government at the Australian National University in Canberra) also hosted the Mongolian delegation, which included a tour of the campus by a Mongolian PhD student Ms Undarga Sandagsuren.

It is interesting to note that a delegation from China National Development and Reform Commission also visited Canberra and Sydney earlier in February to gather information for the new regulation on ‘eco-compensation’ that China is drafting for consideration in 2013. The new regulation is planned to enable payments for ecosystem services and other market-based incentives for conservation.

The Chinese visit also assessed the methods developed in Australia for estimating the value of environmental services, developing markets for environmental services (based on credits and contractual agreements), and the role of the State in market-based mechanisms. It was also an opportunity to exchange information on various research programs on payments for ecosystems services (PES) in grassland ecosystems, and the PES trial in Sichuan Province.