Searching for gibbons is no walk in the park

We only covered about six kilometres over five jagged peaks, but we made a repeated 2,200 metres in altitude gain. My Vietnamese colleagues referred to these as hills. These were no hills!

The last, Ta Sua, peaking at 2,445 metres, was one of the highest mountains in this area of the eastern fringe of the Himalayas. It’s also how far into the wilderness we now have to go to find the Critically Endangered western black crested gibbon. 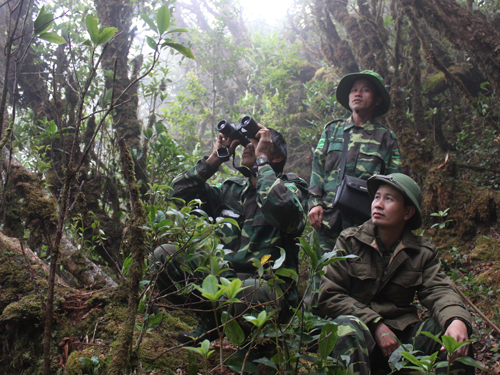 Rampant deforestation and poaching have resulted in a massive decline in this unique and wonderful species, of which only approximately 100 individuals remain in Vietnam. Once these verdant mountain sides would have been alive with the lonely call of early morning gibbon song; the silence that confronts us now is eerie, and a stark warning that without ensuring proper protection there will be no more singing in these mountains.

Through the combined efforts of Fauna & Flora International (FFI) and local communities, we hope to preserve the last few populations of western black crested gibbon in Vietnam. The locals say they want the hills to be alive with the sound of gibbon song again to give voice to the mountain.

The purpose of this gruelling hike was to visit the newly built Ta Sua Conservation Field Station. Funded by the Lemmon Foundation and Fota Wildlife Park, the Field Station is essential in ensuring better cooperation between the Forest Protection Departments (FPD) of Son La and Yen Bai District.

Ta Sua straddles the frontier of these two provinces, and it is a long way from the closest villages on either side of the mountain range to the heart of the forest. Naturally this makes it difficult for FFI’s Community Conservation Teams, comprised of members of the local community and members of the FPD, to patrol this area.

The new field station includes four strategically placed gibbon listening posts right in the heart of this remnant habitat, allowing for panoramic monitoring and patrolling. Furthermore the station will provide a convenient location for FFI researchers to carry out their surveys and establish clearer demographic information on the gibbon family groups.

Cicadas raise an unearthly racket as we walk along a ridge, making me wonder how the gibbons can be heard at all above the noisy chirps. The more experienced Conservation Team point out various interesting marks left by local deer. Sadly we come across the still smoking remains of a small fire, the earth around it littered with the fur and spines of a brush-tailed porcupine. Poachers are clearly an issue in this conservation site.

These discoveries give testament to the importance of a permanent presence of Community Conservation Team patrols, and further illustrate the need for the field station we’ve come to visit. 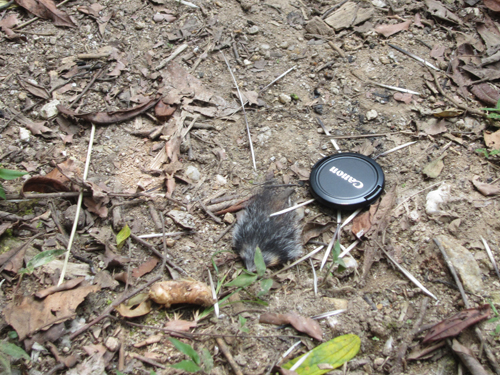 The remains of a brush-tailed porcupine, poached by hunters in the same area that the western black crested gibbon calls home. Credit: FFI

Gibbons are notoriously shy, and much like humans, their mood is affected by the weather. Once at the top of the mountain we are enveloped in an icy fog and the promise of rain. The Community Conservation Teams wearily explain that the gibbons are cold, and that our long trek will unlikely be rewarded with any song.

Regardless, the camp is buoyed by the sight of the Field Station. Everyone is proud of it, a building of which I consider a true feat as my body throbs from the long trek and I huddle closer to the fire to warm my frozen hands. 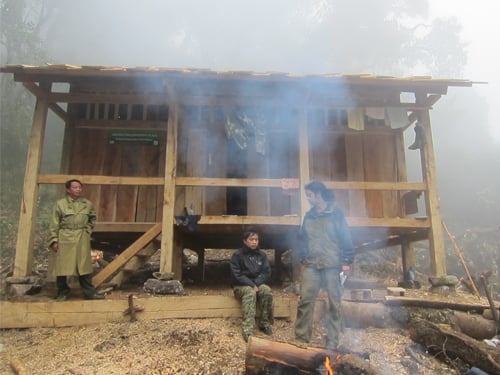 A chilly evening at Ta Sua Conservation Field Station. This station will serve as a research outpost and camp from which FFI's Community Conservation Teams can patrol. Credit: FFI

We wake on our last morning to the sound of rain. The jungle plays the symphony nicely, but the star of the show is silent for the third day in a row. I can empathise. My spirits flag at the prospect of descending, ascending and re-descending those treacherous slopes in the wet. Needless to say I did much of it on my backside. Tall western oaf that I am, I silently envied the light, lithe steps of my colleagues who were so at home in their environment.

This again gave weight to this project, and highlighted the importance of a strong local presence of dedicated workers who can negotiate this terrain and ultimately act as guardians to the gibbon.

Of course the sun came out the following morning. As I looked up to the distant peaks of the mountains from the township of Muong La, I wondered what songs were being sung in the jungle.