Zafer is President of Akdeniz Koruma Derneği (The Mediterranean Conservation Society – Fauna & Flora International’s partner in Turkey) and, together with his team, has been working with local fishing communities, coastguards and the government to promote conservation and sustainable fishing practices in Gökova Bay.

Here, we share an interview with Zafer, originally published in the June 2013 issue of Fauna & Flora magazine…

How did you get started in conservation?

At university I studied civil engineering. While learning about the coastal and harbour aspect, I began to understand the importance of coastal resources, and decided to take a Masters degree in coastal zone management. While I was at university we established a sub aqua society and did the very first loggerhead turtle and Mediterranean monk seal awareness and conservation work in Turkey. After graduation, I worked as a volunteer for a tropical marine survey project in Indonesia and spent a long time in the tropical Pacific, documenting conservation issues.

Did you have to make sacrifices?

Sure I did – in fact I still do! I quit my engineering career in order to work in conservation; I have never had a day job.

What has been your most memorable wildlife encounter?

I get more excited about diversity than a single species encounter. The rainforest in the Sierra Madre Mountains of Luzon Island, Philippines, is a magical place for biodiversity. Similarly, the reefs surrounding Coron Island (also in the Philippines) have spectacular invertebrate and fish life that is extremely memorable for me. And every single patch of reef in Indonesia is a treasure.

How about closer to home?

I began working at the Underwater Research Society in Turkey in 2006. That year, a Mediterranean monk seal pup was found close by. She was only four weeks old and severely dehydrated. We went to pick her up immediately and set up a rehabilitation centre in Foça where we kept her for five months until she was ready to be released back into Gökova Bay. We called her Badem. 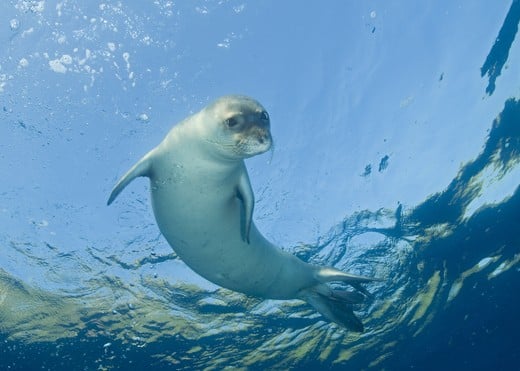 How did people in Gökova Bay react?

She is a very curious and playful seal, and while she made a unique and interesting encounter for scuba divers, she made life quite difficult for skin divers and spear-fishers because it’s hard to hold your breath when a seal is playing rough with you!

When she was a juvenile, the only problem for fishers was that she was sleeping on their boats and soiling them. But unfortunately, when she got bigger, she started capsizing boats as she climbed in and also stole fish from nets, causing further damage. In these cases we paid for the damages, and once we even translocated her back to the bay when she was causing problems in an aquaculture area.

The good news is that, since she was so famous, no fishers ever dared to harm her – some of them even went fishing while she was sleeping on the boat!

Where is she now?

A year after she was released, we were doing an underwater survey when suddenly Badem appeared. She played with us for hours and later followed our boat, crossing the entire bay to the north. She must have been tired because she slept on the boat’s deck for the rest of the day! In April 2012, she disappeared from Gökova Bay, and for a while there was no news. But then we heard that a female monk seal with very similar markings had been sighted in Croatia – we’re pretty sure it is Badem.

What makes her so special?

She is a messenger for her kind. It is normally very difficult to see monk seals in the wild, but thanks to her presence in Gökova Bay thousands of people are now aware of these seals and how endangered they are. Today, fewer than 400 of these beautiful animals are left in the wild, so every single one is important. Gökova Bay is one of the last remaining sanctuaries for the species, because it has lots of remote cliffs, caverns and secluded coves, which make ideal habitat for monk seals.

Critically Endangered monk seals have returned the bay in numbers not seen in living memory.

What is the best and worst thing about your job?

The best thing is the satisfaction of helping to conserve natural resources that most people don’t know or care about. The most frustrating thing is dealing with bureaucracy, which can really slow things down a lot of the time.

What advice would you give to young conservationists starting out?

The conservation world is full of battles, so it requires dedication to see a positive result. Conservation often means raising awareness at the government level, where historically it has not been a high priority, and you need a lot of patience while you wait for things to be officially declared. Specialising in a certain subject or species helps a lot for accomplishment, but really every single person lending a hand in conservation counts.

What are your hopes and fears for the future?

Growth is the most frightening thing for me, globally. Natural resources cannot resist the growth planned for the next decade; we need to change people’s mindsets and redefine the word ‘growth’.

More people and politicians are aware that we are losing our natural resources, but we need powerful people to stand as our allies. We need to put more pressure on rule-makers to make responsible over-arching policies, rather than different rules spread out over lots of different projects here and there. One single act or law with proper enforcement would change a lot.