Karina has almost ten years of experience working and travelling in the developing world, predominantly in Latin America, and over this time developed a passion for and commitment to conservation and development. Before joining FFI as Programme Officer for the Americas and Caribbean, Karina spent two and a half years in Ecuador managing a rainforest conservation and community development programme. A large part of her role was to develop relationships and partnerships with local communities, foundations and NGOs, whilst delivering valuable conservation initiatives. Fluency in Spanish aided her cultural understanding and knowledge, but did not always help when working with the more remote indigenous communities, who all have their own native language. Through these experiences, she has really learnt the art of cross-cultural communication!

It had been 6 years since my last visit to Nicaragua, during which (by pure coincidence) I had visited two places that are now key project sites for Fauna & Flora International (FFI): Ometepe and Estero Padre Ramos.

After spending 10 years in Latin America, returning to the tropics always feels like a home from home, so I was excited to have the opportunity to revisit Nicaragua with a totally new perspective. I couldn’t help but wonder how much it would have changed since 2006.

Having joined FFI’s Americas and Caribbean team in February this year, it was great to be able to meet the members of our Nicaragua team in person. Modern technology allows daily interaction over vast distances, but there is no substitute for working face-to-face, meeting people and seeing projects first hand.

After getting to grips with life in the Managua office and a short visit to Ometepe, I headed up north – destination: Estero Padre Ramos, a stunning, remote coastal spot in the far north-west of the country, a stone’s throw from the Honduran border.

Estero Padre Ramos Natural Reserve is a spectacular coastal estuary consisting of a series of largely undeveloped, mangrove-lined inlets and canals. Only a few years ago it was discovered to be one of two locations that each host approximately 40-45% of the known nesting population of hawksbill turtles on the entire eastern Pacific coast. As such the area is critically important for the conservation of this species.

In keeping with the 2012 Olympics theme, there was something pretty special brewing to coincide with the start of the hawksbill turtle nesting season – The Hawksbill Cup (or Copa Carey in Spanish). This season, the race to protect the hawksbill gets competitive, with international reputations at stake!

Team Nicaragua consists of the communities in and around Estero Padre Ramos Natural Reserve and their campaign got underway with determination, their intentions clear in the below video. Their competition…? El Salvador.

Around 50 miles north-west, as the crow flies, is the Biosphere Reserve Bahia Jiquilisco in El Salvador – the second location on the eastern Pacific that hosts important numbers of nesting hawksbill turtles. It has similar mangrove habitat and coastal inlets to that of Estero Padre Ramos and it is within these habitats that the hawksbill loves to nest, often tucked away in amongst the twisted roots of the mangroves.

To ‘score’ in the Hawksbill Cup, teams can notch up points through different means, such as the number of turtles observed, number of nests protected, number of eggs collected, number of hatchlings, and hatchling successes. The scores will be added up each month and the competition will be fierce right through the nesting season, which ends in October.

FFI and its partner Eastern Pacific Hawksbill Initiative (ICAPO) have been collaborating on Hawksbill conservation efforts on the eastern Pacific coast for 4 years now. Working with communities, government, municipalities, local and international NGOs around Estero Padre Ramos Natural Reserve, the hawksbill conservation project has been running since 2010. Uniting different members within the communities is seen as key to the long-term success of the project and hopes for species recovery. 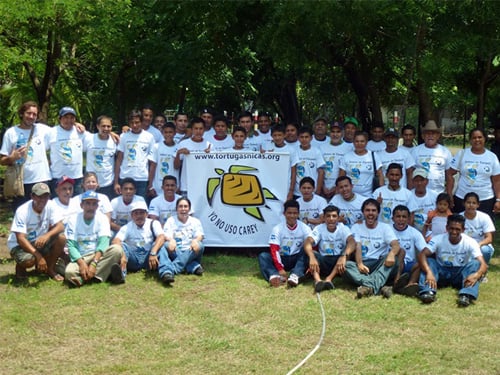 I participated in a special Hawksbill Committee meeting which saw the launch of this great competition, during which a campaign video was premiered (the first time it had been seen by the communities) and the scoreboard was unveiled.

Team Nicaragua were fired up and ready to go.

During my trip I was lucky enough to join team members out on patrol for two nights in their efforts to rack up some points on the scoreboard and move closer to those all-important conservation goals.

José Urteaga (FFI’s Nicaragua Country Coordinator), David (one of the community members responsible for the nightly patrols in the nesting season) and I took the early patrol shift from 7pm until midnight. 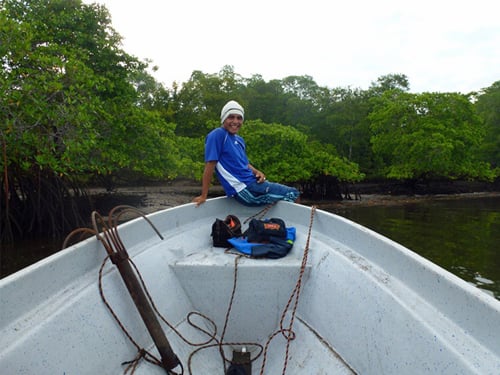 It’s a tough game – battling sand flies, mosquitos, humidity and storms throughout the night as we made our way up and down the beach in search of turtles. Our first night was a challenge; it was incredibly dark and stormy, with thunder constantly rumbling. Spectacular lightning – at times just a little too close for comfort – allowed brief glimpses of the beach ahead as we kept an eye out for turtles emerging from the sea and I tried to avoid the rogue branches that were sneakily tripping me up in the darkness.

At midnight we returned to the base, disappointed, with not a single point to go towards the Hawksbill Cup. We threw ourselves into our hammocks with hopes that the late shift (midnight-5am) would have more luck. It was not to be.

In fact, we wouldn’t get our first encounter until the next night. It was less stormy, but still with lightening and rumblings in the distance, as José and I excitedly stumbled across the tracks of a turtle that had recently left the comfort of the sea to lay her eggs. We were too late to see her, but she had left her distinctive tracks and a neat nest before returning to the sea. 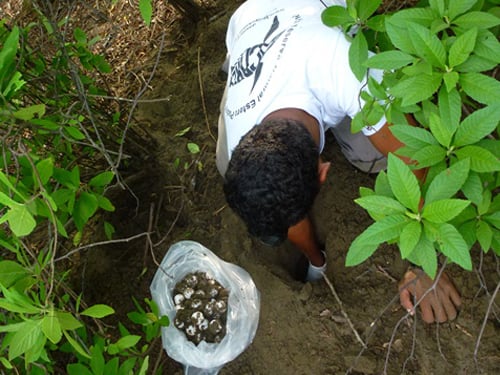 Collecting eggs to go to the hatchery. Credit: Karina Berg/FFI.

It was an olive ridley – another threatened marine turtle and one which FFI also works to conserve. It was not, however, one that would score Team Nica any official points in the Hawksbill Cup. Nevertheless, we took her eggs back to the protection of the hatchery – all 102 of them.

A whole night of patrol passed, but with no more signs of turtles – we would have to wait until the morning to hit the scoreboard. Then, during routine inspections of the inlets by boat (checking places that can’t be reached on foot by the patrols), we finally scored some points! Hidden away in the mangroves, a hawksbill had come ashore in the small hours and left 124 eggs.

These were carefully collected and transferred to the hatchery for safe keeping, with the hatchlings hopefully to be released in about 60 days’ time. Gooooooaaaaaaaaaal – Team Nica!

Reflecting on my trip, there had definitely been some changes since my last visit, but not all bad.

Inevitably there were more footprints in that remote north-western corner of Nicaragua than when I was first there 6 years ago. Development is unavoidable it seems, so managing the impacts is crucial for effective conservation (and, in turn, the livelihood options for the people living there).

Since the involvement of FFI and its partners in Estero Padre Ramos, the positive change to the hawksbill turtle population is evident.

Two years ago 100% of nests were being raided for their eggs, which were illegally sold for consumption across the country. Added to this was the extra value of hawksbill shell for jewellery and other artisan work, which gave people added incentive to poach this species.

But by harnessing the strength of a united community, training them, raising awareness of the decline in turtle numbers and involving them in the project, we have seen an almost 100% reversal of the illegal poaching trend of the hawksbills in this area. This is a testament to conservation that takes account of the human need to make a living.

To see first-hand the dedication and commitment of the FFI Nicaragua team and the impacts they have had on the communities they work with is humbling. Providing creative incentives (such as the Hawksbill Cup) helps to maintain the enthusiasm and energy for conservation efforts within those communities. 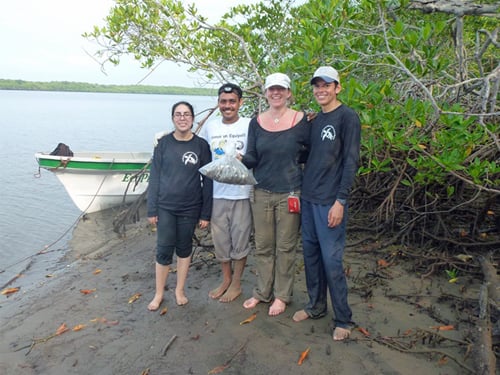 In the context of the big game, we are scoring lots of goals for the hawksbill in this competition. The next challenge is to ensure the pitch (i.e. all of the protected area) is kept up to Olympic standards too.

To follow the progress of the Hawksbill Cup throughout the turtle nesting season, visit our partner’s website for regular updates on the scores for both Nicaragua and El Salvador.

Karina has almost ten years of experience working and travelling in the developing world, predominantly in Latin America, and over this time developed a passion for and commitment to conservation and development. Before joining FFI as Programme Officer for the Americas and Caribbean, Karina spent two and a half years in Ecuador managing a rainforest conservation and community development programme. A large part of her role was to develop relationships and partnerships with local communities, foundations and NGOs, whilst delivering valuable conservation initiatives. Fluency in Spanish aided her cultural understanding and knowledge, but did not always help when working with the more remote indigenous communities, who all have their own native language. Through these experiences, she has really learnt the art of cross-cultural communication!