The sudden death of over 200,000 saiga antelopes in Kazakhstan in May 2015, more than 80% of the affected population and more than 60% of the global population of this species, baffled the world. In just three weeks, entire herds of tens of thousands of healthy animals, died of haemorrhagic septicaemia across a landscape equivalent to the area of the British Isles in the Betpak-Dala region of Kazakhstan. These deaths were caused by Pasteurella multocida bacteria.

But this pathogen most probably was living harmlessly in the saigas’ tonsils up to this point, so what caused this sudden dramatic Mass Mortality Event?

New research by an interdisciplinary, international research team has shown that many separate (and independently harmless) factors contributed to this extraordinary phenomenon. In particular, climatic factors such as increased humidity and raised air temperatures in the days before the deaths apparently triggered opportunistic bacterial invasion of the blood stream, causing septicaemia (blood poisoning). 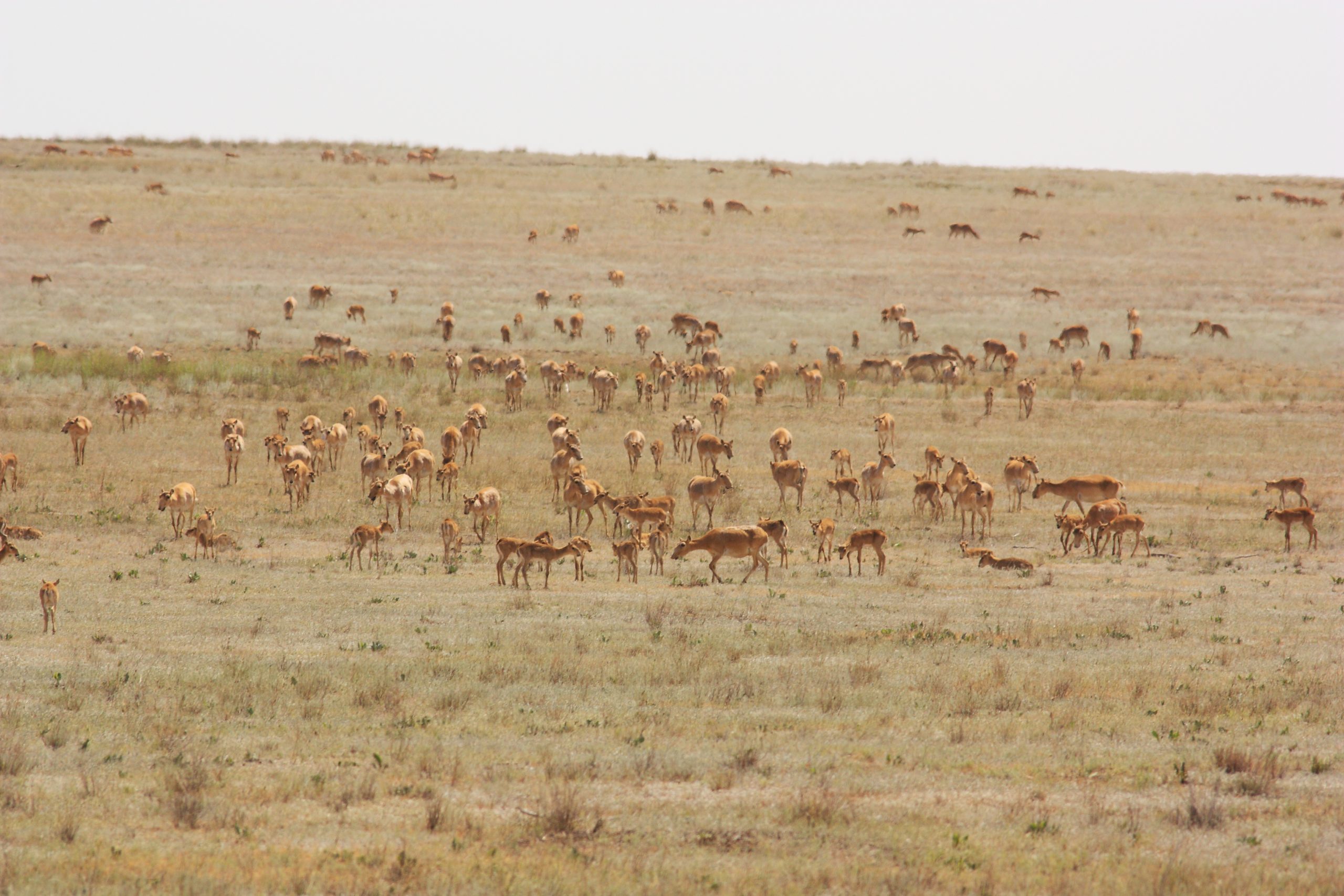 By studying previous die-offs in saiga antelope populations, the researchers were able to uncover patterns and show that the probability of sudden die-offs increases when the weather is humid and warm, as was the case in 2015.

The research also shows that these very large mass mortalities, which have been observed in saiga antelopes before (including in 2015 and twice during the 1980s), are unprecedented in other large mammal species and tend to occur during calving. This species invests a lot in reproduction, so that it can persist in such an extreme continental environment where temperatures plummet to below -40℃ in winter or rise to above 40℃ in summer, with food scarce and wolves prowling. In fact, it bears the largest calves of any ungulate species; this allows the calves to develop quickly and follow their mothers on their migrations, but also means that females are physiologically stressed during calving.

With this strategy, high levels of mortality are to be expected, but the species’ recent history suggests that die-offs are occurring more frequently, potentially making the species more vulnerable to extinction. This includes, most recently, losses of 60% of the unique, endemic Mongolian saiga sub-species in 2017 from a virus infection spilling over from livestock. High levels of poaching since the 1990s have also been a major factor in depleting the species, while increasing levels of infrastructure development (from railways, roads and fences) threaten to fragment their habitat and interfere with their migrations.  With all these threats, it is possible that another mass die-off from disease could reduce numbers to a level where recovery is no longer possible. This needs to be countered by an integrated approach to tackling the threats facing the species, which is ongoing under the Convention on Migratory Species’ action plan for the species. 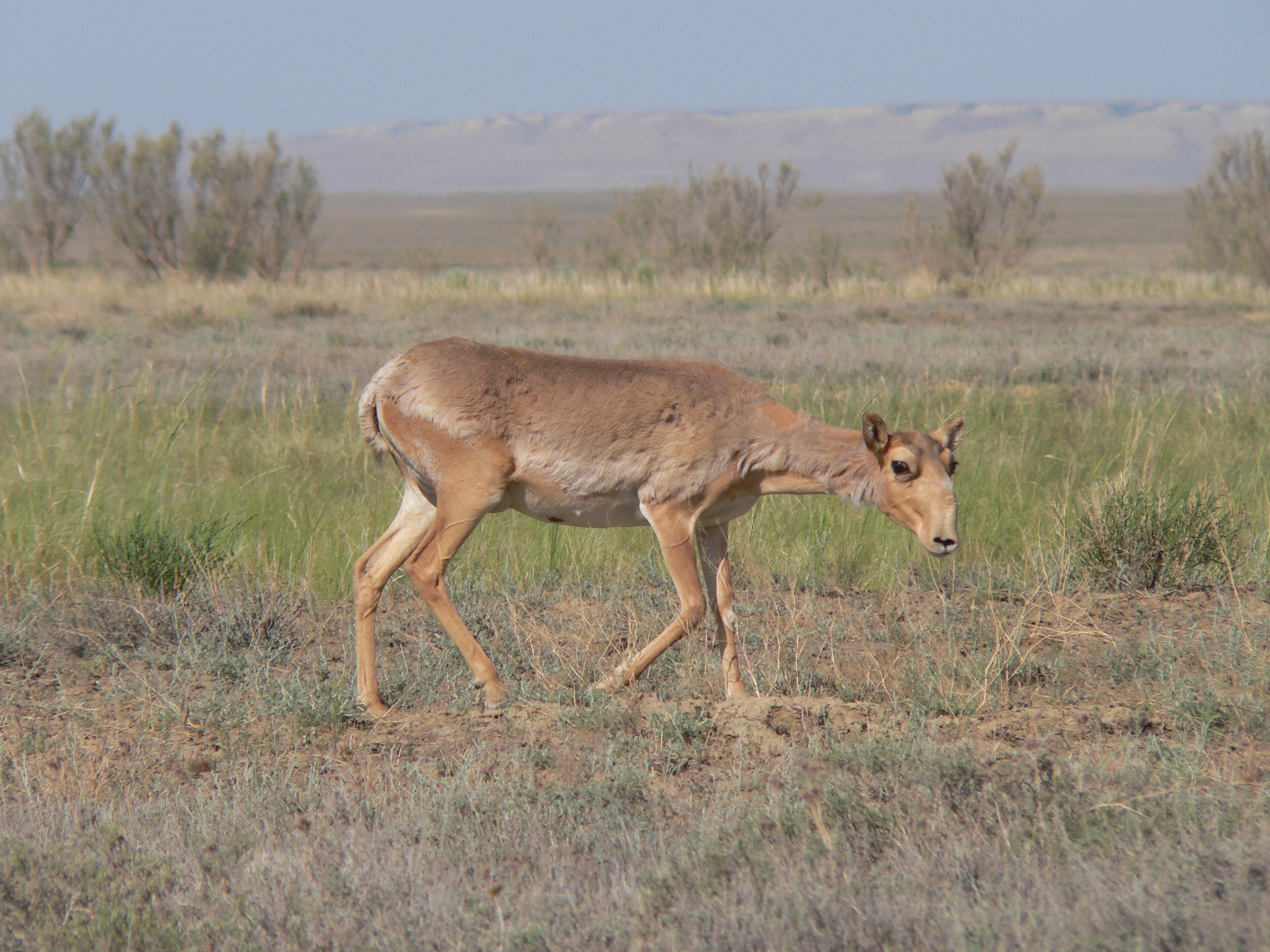 The saiga’s nose has an unusual structure that is thought to filter out dust in the dry summers. Credit: ACBK/Eva Klebelsberg

This research was conducted as part of a wide international collaboration, adopting a ‘One Health’ approach – looking at the wildlife, livestock, environmental and human impacts that have driven disease emergence in saiga populations.

Adopting such a holistic approach has enabled the research team to understand the wider significance of die-offs in saiga populations, beyond simply the proximate causes of the 2015 epidemic.

Professor Richard Kock, Professor in Emerging Diseases lead researcher at the Royal Veterinary College, said: “The recent die-offs among saiga populations are unprecedented in large terrestrial mammals. The 2015 Mass Mortality Event provided the first opportunity for in-depth study, and a multidisciplinary approach has enabled great advances to be made. The use of data from vets, biologists, botanists, ecologists and laboratory scientists is helping improve our understanding of the risk factors leading to MMEs – which was beneficial when another MME occurred, this time in Mongolia in 2017. Improved knowledge of disease in saigas, in the context of climate change, livestock interactions and landscape changes, is vital to planning conservation measures for the species’ long-term survival.”

Mr Steffen Zuther, Project manager for Kazakhstan at the Frankfurt Zoological Society/Association for the Conservation of Biodiversity of Kazakhstan (Fauna & Flora International’s partner in Kazakhstan), said: “This research is not only the first of its kind through its complexity and interdisciplinary approach, it also helps in capacity building inside Kazakhstan and shaping the public opinion towards a more evidence based thinking. MMEs [Mass Mortality Events] are a major threat for the saiga antelope and can wipe out many years of conservation work and saiga population growth in just a few days. Therefore, understanding these MMEs, what triggers them and what can be done to combat them is extremely important to develop effective saiga conservation strategies. The triggering of such MMEs in saiga through weather conditions shows that not much can be done to prevent them occurring, and therefore how important it is to maintain saiga populations of sufficient size for the species to survive such catastrophes.”

Fauna & Flora International contributed funding towards this critical research as part of our work to conserve the saiga.