It’s the botanical equivalent of bumping into a bird of paradise. A series of expeditions to a remote mountain top in West Papua in search of a legendary blue orchid have hit the jackpot.

Joint surveys led by West Papua’s Natural Resources Conservation Centre (BBKSDA West Papua) in collaboration with staff from the Indonesia team of Fauna & Flora International (FFI) have helped to shed new light on a plant that has captured the imagination of scientists and amateur enthusiasts alike since it was first identified as a new species.

For BBKSDA and FFI, the story began in 2016, when a team conducting a routine biological survey in the forests of Waigeo – a remote island in West Papua – stumbled on a blue orchid. It is thought to be the first time that this species (scientific name Dendrobium azureum) has been documented in the wild.

True blue orchids represent the holy grail for orchid aficionados everywhere, because very few of these flowers are blue in their natural state. Hardly anything is known about the population, distribution and life cycle of this particular species, beyond the fact that it is found only on Waigeo. With this in mind, West Papua BBKSDA recently undertook a series of follow-up surveys in the East Waigeo Nature Reserve, with the specific aim of searching for more blue orchids on the island. 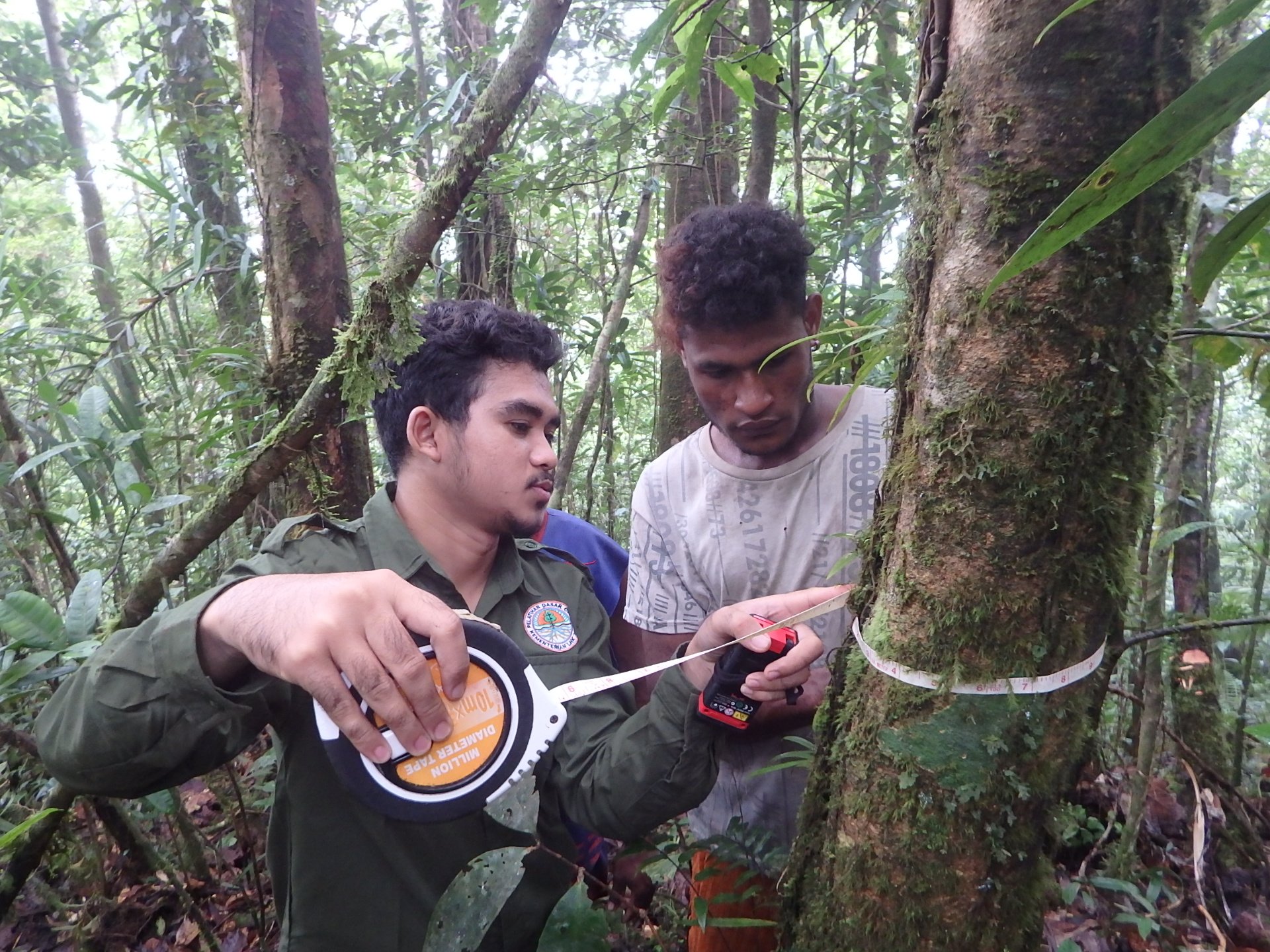 With support from members of the local Mayalibit Bay community and FFI staff, the BBKSDA-led survey team recorded almost 80 rare plants, including a number of endemic species. And, as the images here attest, their blue orchid quest was a fruitful one. 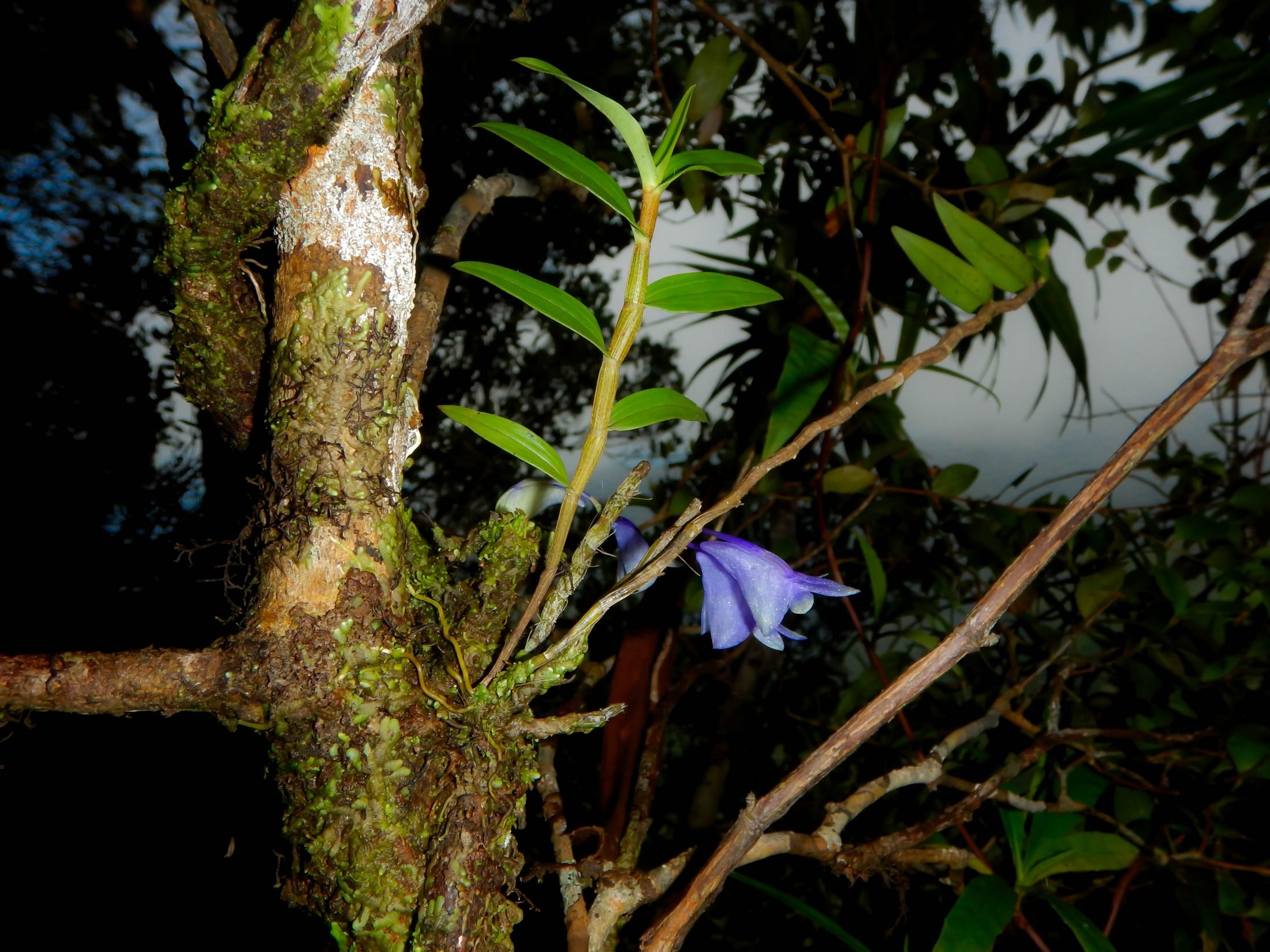 One of the rare blue orchids found growing as an epiphyte on a small tree. Credit: Yanuar Ishaq DC/Fauna & Flora International

According to Budi Mulyanto, Acting Head of West Papua BBKSDA, the success of the latest botanical expeditions has added to our understanding about the taxonomy, ecology and biogeography of the species and, in the process, made a vital contribution to its conservation.

“The rediscovery of Dendrobium azureum is an important part of efforts to protect Raja Ampat's forests, which are also home to other unique wildlife. From the exploration, we gained knowledge of what treasure we have and the amount of effort needed to conserve it. Therefore, multi-stakeholder collaboration is the future key to preserve this forest wilderness.”

Yanuar Ishaq DC, a member of FFI’s Indonesia team who accompanied the expedition and photographed the orchid, believes that the plant’s status on the IUCN Red List merits a reappraisal: “This endemic species has a narrow distribution within a specific habitat, and a population of fewer than 100 individuals in the wild. With this valuable information, it can be proposed to change the conservation status from ‘Not Evaluated’ to ‘Critically Endangered’ so that future protection efforts will increase, based on scientific evidence, and with enforceable regulations. Every kind of living thing in an ecosystem is valuable, and we don’t want to lose any of them.” 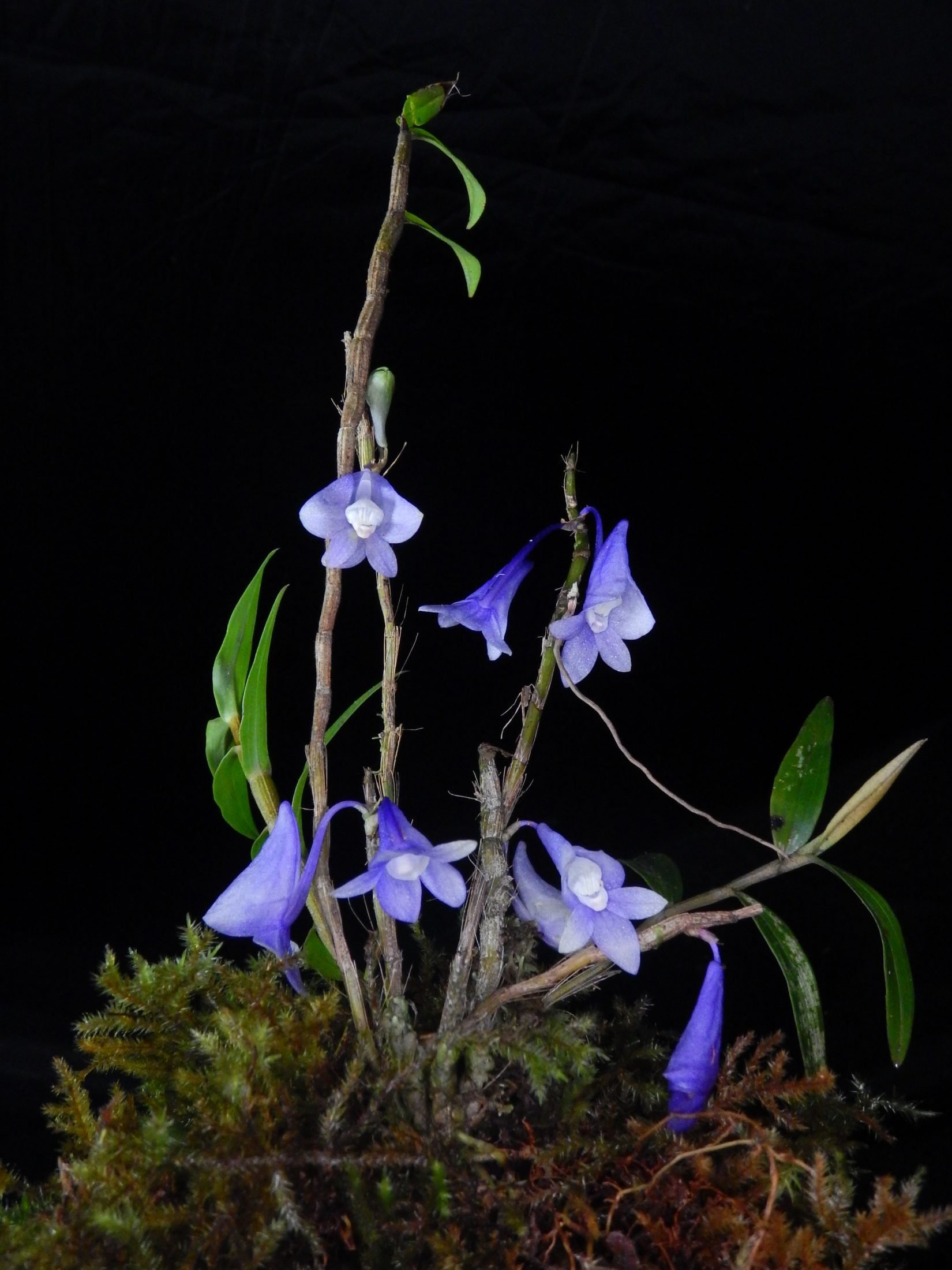 The recent discoveries are merely the latest chapter in the remarkable saga of Dendrobium azureum, which began almost a century ago. The central character is the intrepid Evelyn Cheesman, who relinquished her role as an English governess to study entomology in the 1920s before embarking on a series of solo expeditions to remote locations, including New Guinea and – you’ve guessed it – Waigeo.

The lady of the mountains

Known by the Indigenous peoples she encountered as ‘the woman who walks’ and ‘the lady of the mountains’, the former governess found that the hills were alive with the sight of orchids. Cheesman recorded and collected numerous species unknown to the outside world. These included a blue orchid found on the summit of an extinct volcano, Mount Nok, which was among the specimens subsequently bequeathed to the Natural History Museum in London. 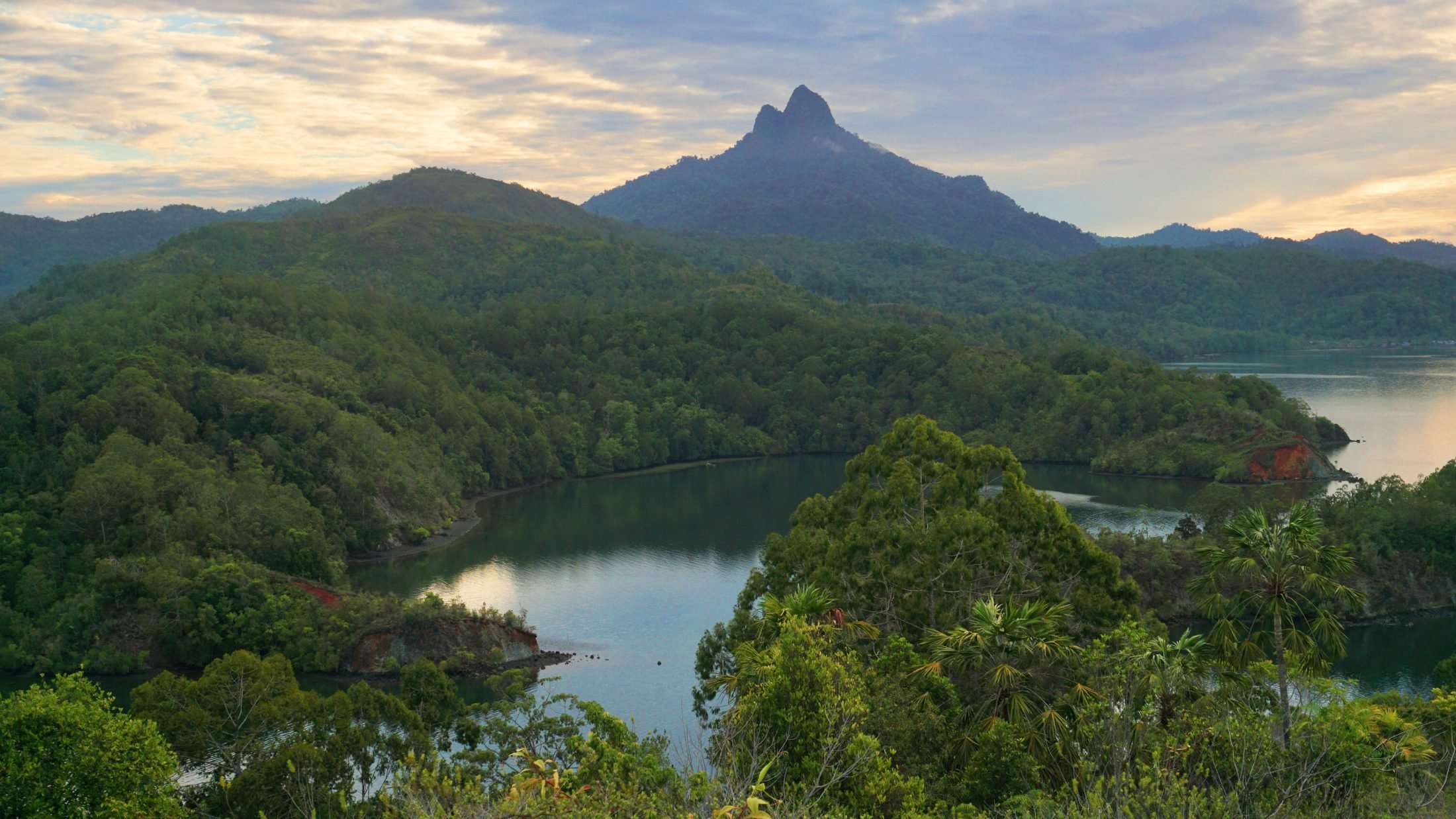 Fast forward to 2013, when Dr André Schuiteman, an orchid expert at the Royal Botanic Gardens in Kew, unearthed a collection of unnamed Dendrobium orchids in a storage drawer at the museum. They included two specimens labelled ‘Orchid growing on trees; flowers deep sky blue’ – enough information for Schuiteman to suspect that he was looking at an undescribed species. Further close examinations and careful comparisons confirmed his initial impression. He named the new orchid Dendrobium azureum.

Waigeo is the largest of the 1,500 islands and islets that make up the remote and biologically rich Raja Ampat archipelago. Due to its geological isolation, the island is a hotbed of evolution that has given rise to the kind of species richness described by Charles Darwin as ‘endless forms most beautiful and most wonderful’.

The island is renowned among ornithologists as the home of the stunning Wilson’s bird of paradise and the quirky Waigeo brush turkey, as well as exotic marsupials such as the Waigeo spotted cuscus. The presence of the blue orchid merely adds to the mystique of this extraordinary haven of biodiversity. 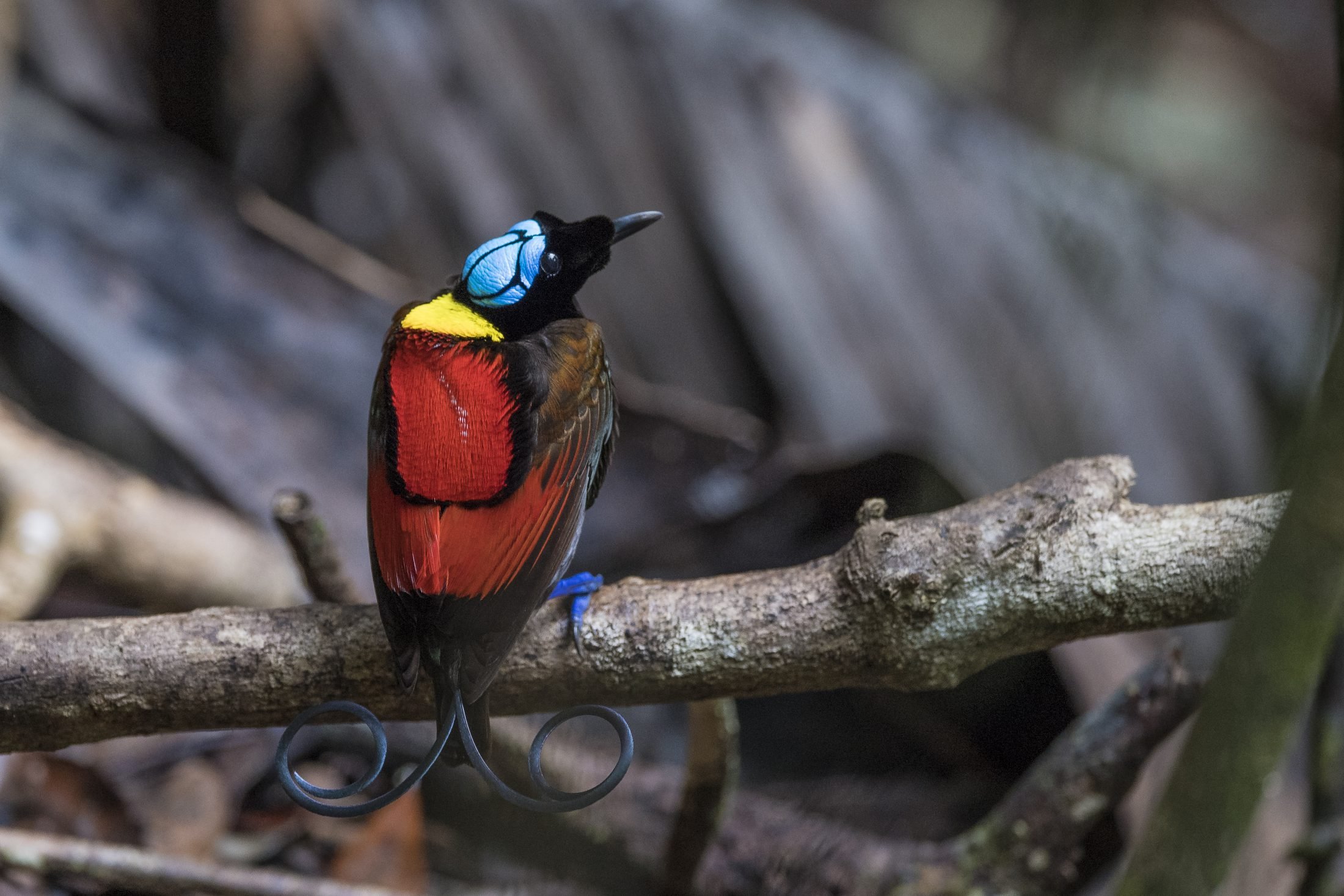 Wilson’s bird of paradise is endemic to the rainforests of Waigeo and Batanta, West Papua. Credit: Bjorn Olesen

But this azure jewel is by no means the only botanical marvel endemic to this remote paradise. Unique forms of rhododendron, myrtle, soapberry and pitcher plant have also been found on Waigeo, hinting at the existence of other, as yet undiscovered, rarities. FFI is supporting our in-country partners to help ensure that these priceless forests receive the protection they so richly merit.

Plant diversity is fundamental to all life on our planet. It is in our interests to protect every one of the 400,000 plant species that form the foundations of life on Earth.
Please help us to conserve the world's threatened plants.