It’s no secret that the forests of the world are under severe pressure from human activities. We tend to think of tropical forests, and in particular the Amazon, as bearing the brunt of the impacts of deforestation and other drivers of forest clearance. While tropical forests are faring badly, there is another forest type that has been subject to more degradation and destruction than any forest type on Earth over the last 50 years: mangrove forests.

The level of destruction has been staggering. Since 1980 alone more than 20% of the world’s mangrove forests have been cleared, according to the Food and Agriculture Organization of the United Nations. Less than half the Earth’s original mangrove forest cover remains.

An incredible group of species, mangroves obtain fresh water from salt water, enabling them to thrive in harsh and unstable coastal habitats. They do this by either secreting salt through their leaves or, in some cases, blocking the absorption of salt at their roots.

Mangroves perform incredibly important ecological functions. They provide nursery areas for juveniles of thousands of fish, crustacean and mollusc species. In some places, their dense root and branch systems play a key role in coastal protection, acting as a crucial barrier against storm surges, flooding and erosion, which will pose a growing threat as climate change worsens. Their thick, tangled root systems also encourage the deposition of nutrient-rich sediments from rivers, trapping these before they reach the ocean and smother other important habitats, such as coral reefs. Mangroves are also crucial to the livelihoods and food security of local communities for the timber and other products that they provide, and the fisheries that they sustain.

Alongside all of this, mangrove ecosystems are critical climate regulators as both the plants and their associated sediments store large amounts of carbon. The UN has estimated that the total amount of carbon held in the world’s mangroves is around 4.2 billion tonnes, equivalent to the annual emissions of China and the US put together. Not only do they store huge amounts of carbon, they are hugely efficient at doing it, absorbing and storing carbon at up to 10 times the rate of terrestrial forests.

This is why Fauna & Flora International (FFI) is working to protect and restore mangroves. In Honduras, FFI’s partners have brought 6,500 hectares of mangrove forest – which was threatened by clearance for tourism development and fruit plantation expansion – under increased legal protection, as well as establishing a mangrove monitoring programme. Twenty hectares of mangrove has also been restored with the participation of communities. There are also ongoing community efforts to remove the invasive African oil palm that poses a threat to existing mangrove habitats. 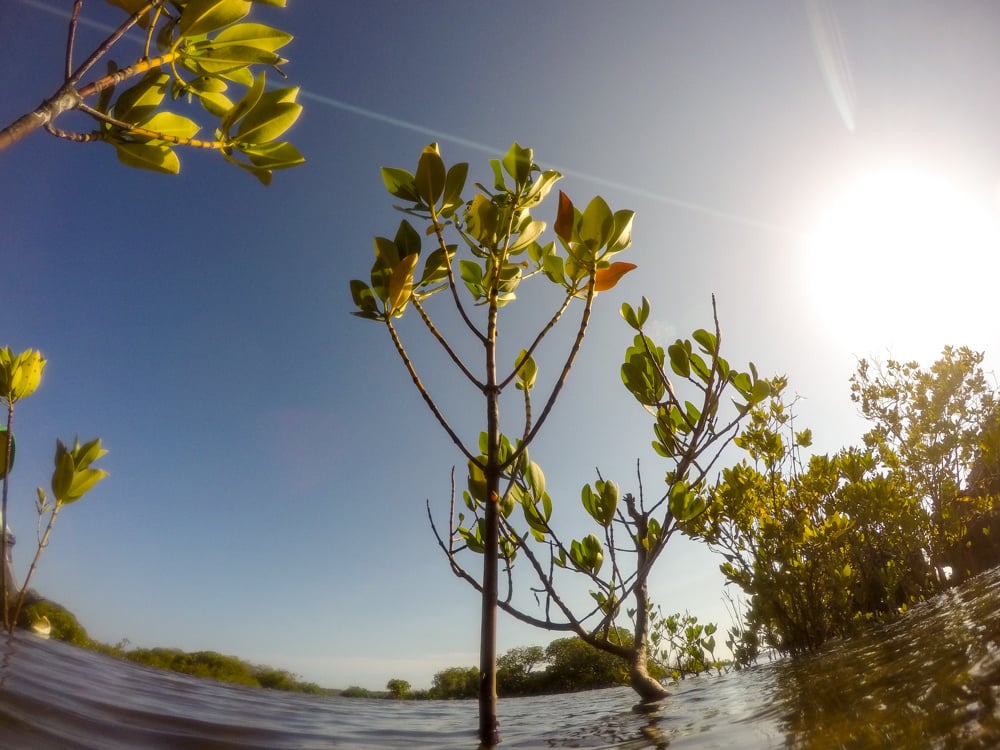 “Cambodia and Honduras pledged last year as part of the Global Mangrove Alliance that they would help contribute to an increase in the global area of mangrove habitat that existed in 2018 by 20 per cent by the year 2030. FFI will work with both countries – and others – to make this commitment a reality,” says Sue Wells, Head of Marine at Fauna & Flora International. “This week the 2020 Our Oceans Conference takes place in Oslo and we look forward to countries stepping up their action for nature by making new commitments on mangrove protection and restoration, as well as on climate change.”

Other threats contributing to extensive mangrove losses worldwide include charcoal production and logging, oil exploration and extraction, urban expansion, development of ports and roads and shrimp aquaculture. As much as 50% of mangrove destruction in recent years has been due to clear cutting for shrimp farms.

Protecting mangroves from clearance for charcoal production has been a focus in Myanmar, where, in collaboration with local fishing communities and the government, FFI is in the process of establishing locally managed marine areas that encompass mangrove habitat. These areas will have no-take zones, gear and access restrictions and will be patrolled by communities and government officials. Other work in Southeast Asia includes the establishment of two mangrove nurseries in Cambodia for future restoration work.

In northern Kenya, FFI has partnered with the Northern Rangelands Trust to support Pate Island Conservancy in addressing the significant threat posed by the unsustainable extraction of mangroves for firewood and poles used in construction. Efforts to reduce illegal exploitation have so far focused on increasing the number of patrols carried out by local rangers, which has enabled suspects to be apprehended. Additionally, a total of 35,250 seedlings were planted between 2015 and 2018.

The protection and restoration of mangroves is critical to the fight against climate change, as well as central to ensuring local communities are protected from climate impacts. Mangrove forest protection will also ensure that local communities continue to benefit from the livelihoods provided by these ecosystems. Central to FFI’s approach is working with local communities, government partners and economic sectors that see mangroves as resources to be exploited or cleared for more immediately economically productive activities.

They are just a fraction of the world’s total forest cover, but whether mangroves survive and thrive or not will play a big part in determining the fate of millions of people – and of our planet.