Like so many budding conservationists, I had big dreams of saving the planet as a child. I was going to chain myself to trees and hunt poachers and clean up the oceans and visit the land of chocolate too. Nothing if not realistic, in most of my childhood daydreams I would beat the bad guys and end up with a bunch of furry animal friends that could talk and we’d live in the forest at one with nature and sing songs … yes totally realistic.

Realisation set in at some point that childhood aspirations don’t always eventuate, and the select few that do manage it, usually find their paths aren’t easy. Most are determined, dedicated and sacrifice much of what most of us couldn’t in order to work in their chosen fields. Often without thanks or acknowledgement, they persevere purely for the chance to make a difference in this world.

I was lucky enough to encounter one such lady a few years ago on a trip to Indonesia. Some friends and I travelled to Sumatra to learn about wildlife and meet some of the dedicated people that help protect it. Ernie Suyanti Musabine, or Yanti as we call her, a wildlife veterinarian, had agreed to meet up with us when we arrived to show us her work.

I had heard tales of how Yanti rode elephants through the jungle for days protecting wild elephant herds. I heard how she rescued and rehabilitated injured and orphaned orang-utans and other wildlife, as well as an exceptionally heroic tale of how she hand injected anaesthetic into a wild Sumatran tiger caught in a snare … Needless to say I pretty much thought I was about to meet wonder woman … seriously! 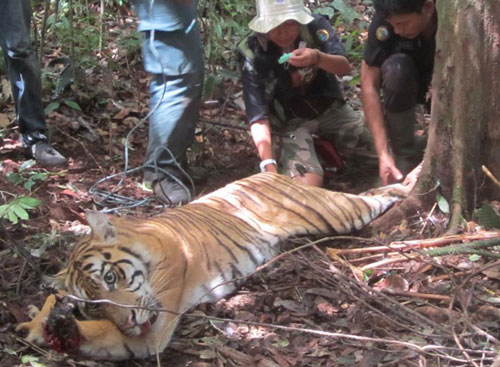 However Yanti, much to my surprise, was quiet and shy with a big bright smile. Barely cleared my shoulders in height and giggled a lot at our bad attempts at speaking Indonesian. Yanti eagerly showed us her work and allowed us to accompany her to veterinary conferences, translating everything as best as she could to help us understand. Polite and helpful, Yanti went to great lengths to make us feel at home in her world.

As we explored the jungle with her, Yanti showed us places where she had found crops poisoned to kill wild elephants, villages where she had caught and relocated wild tigers, and introduced us to a baby elephant she was hand rearing that was rescued after it fell down a well and lost its herd. I quickly learnt that Yanti’s work was hard, endless and not merely limited to the forest. Yanti had worked tirelessly to develop relationships with local villages to mitigate wildlife conflict, local rubber and palm oil plantations, as well as NGOs and government authorities like the Department of Forestry in order to help save and protect Sumatra’s wildlife. Talk about inspiring … here’s tiny Yanti off saving tigers, elephants and the like and I’m struggling to remember my green bags when grocery shopping!

After working with wildlife all over Indonesia for many years Yanti is now based at the Elephant Conservation Centre in Bengkulu, Sumatra. The ECC is situated in Kerinci Seblat National Park, one of the last strong holds for many of Sumatra’s wildlife. Yanti is currently the veterinarian for the ECC elephants, as well as the Coordinator of the Conservation Response Units (CRU), a member of the wildlife rescue unit BKSDA (The Nature Resources Conservation Agency), along with acting coodinator of the centre which is run by the Minister of Forestry, Republic of Indonesia. A busy lady indeed, but she still took the time to show us her passion for Sumatra’s wildlife. 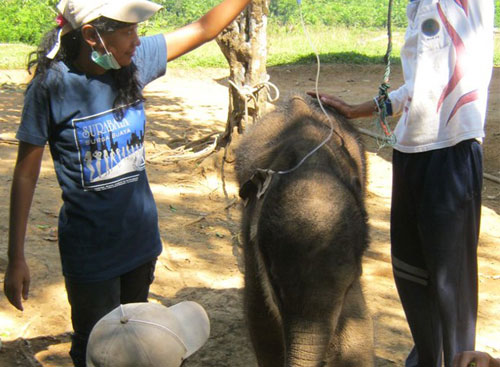 Yanti is now based at the Elephant Conservation Centre in Bengkulu. Photo courtesy: Ernie Suyanti Musabine

Yanti also works closely with Fauna & Flora International’s Tiger Protection and Conservation Units in Kerinci Seblat National Park. She provides medical treatment and rehabilitation for tigers caught in snares, and helps relocate tigers from populated areas. “In every tiger-human conflict mitigation, my team and I always do education to improve awareness to local people about not to disturb the tigers, such as poaching or kill it.  Because in many occurrences a tiger shall kill human if it felt disturbed. In Bengkulu people who are often killed by the tiger is illegal loggers and poachers and people gardening in the jungle. In fact it seems a tiger can distinguish a person who is a threat to them and with someone who will not bother them as tigers never disturb a forest patrol team or a rescue team, even though they often have to stay in home range of the tiger and sometimes also to see it in the jungle.”

When asked about her experiences, Yanti recalled many tales including rescuing siamangs, gibbons and also sun bear and tapir from the illegal pet trade, an orang-utan who had been shot with 62 rifle bullets, leaving it alive but blind. Multiple elephants who had fallen down coal mines needing rescuing, malnourished captive elephants needing treatment, more than eight wild elephants poisoned and killed, two CRU patrol elephants shot by police at the ECC forest, one captive elephant killed by a poacher and his ivory taken, clouded leopard snared by poachers and another shot dead, multiple tigers caught and killed in snares and one even shot by police. Sadly, also the body of a tiger cub killed and cast into the river … and the list goes on. But as positive as ever Yanti says ‘Still, I take care of many wild animal, such as crocodile, wild cat, golden cat, bird, snake, deer, and others.  Because I’m a veterinarian who is working for wildlife conservation, so I work not only for elephants and tigers but also all species of wildlife in Sumatra.”

A lot of poaching and wildlife human conflict is a side effect of bigger problems. Much damage to the forests is caused by government policies that allow permits for large scale mining and expansion of palm oil plantations etc, which then opens up the forests and allows easy access by poachers and selective loggers. “We hope regional government in Bengkulu and central government in Jakarta don’t issue  permits for coal mining and another interests exploiting the ECC forest and its surroundings, because this is habitat of elephants and tigers, and provides forest corridors as a home range of wildlife from ECC to Kerinci Seblat National Park and otherwise. We hope the government and relevant parties are serious to protect Sumatran wildlife and support policies that protect the efforts of wildlife conservation.”

In spite of what she faces daily, Yanti has high hopes for the ECC in the future,  “We want to make ECC forest not only as a centre of elephant and tiger conservation  in the Province of Bengkulu, but also as a centre for education of wildlife conservation, research and ecotourism.” 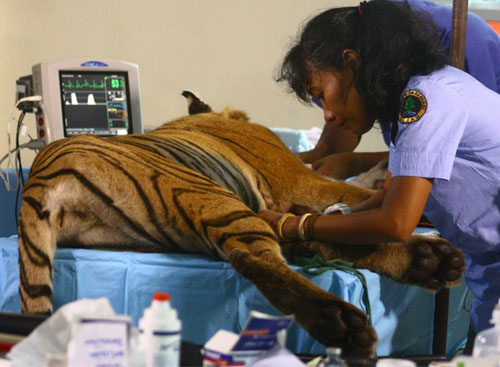 With enough support from the government and other conservation organisations, Yanti’s work can continue giving hope for the future of Sumatra’s wildlife. It’s obvious that our big beautiful world is a much better place having Yanti and others like her in it, and even though our inner child didn’t save the world as planned, perhaps we can aspire to be more like these real life superheroes and each try to do our part for our planet, in our own way every day.