The sky is uncharacteristically white and the mountains appear on the horizon like faded shadows.

Our driver tells me it is smoke from burning forests in Sumatra’s eastern Riau province. The huge cone of Gunung Kerinci, Indonesia’s largest volcano, is wraithlike, its lower slopes lost in an opalescent haze, above which the exposed summit seems to float.

This should be the monsoon season, not a time for forest fires. It feels like a grim portent that perhaps the loss of forest in places like Sumatra is now affecting the climate.

Lake Gunung Tujuh lies east of Gunung Kerinci (Mount Kerinci).Lake Gunung Tujuh, where we are heading to conduct high altitude mammal surveys, is also a gauzy shadow. Leached of detail it appears huge – a trick of perspective, as I have noticed on clear days after rain how small and close the mountains look.

As we climb we leave behind the sounds of civilisation as the bars on our phones slowly vanish. Incommunicado we board pirogues (small boats) to cross the lake at the crater summit to our campsite.

Traveling like this, through a timeless environment in a hollowed out tree trunk, gives me a visceral sense of the past.

Pirogues were probably the first mode of transport ever fashioned by humans. To know they are still used in landscapes that haven’t changed since the dawn of our species gives me hope that all is not lost just yet. 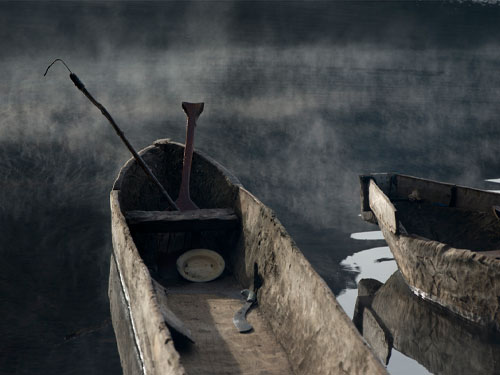 A lapse of memory this morning in town meant I forgot to collect our field supplies from the shop where they were waiting, bound in a cardboard box. This means we are without the luxury items – tinned fish, coffee, and the local potato sweets known as dodol. The candles were in the box, too, so once the sun sets we are in darkness but for the camp fire.

The moon rises overhead and one of my guides asks if there is jungle there. It is dead, I explain, but once it was part of Earth, knocked into an obsequious orbit by some unimaginable collision.

I want to laugh at his next question. ‘If it was knocked off the Earth why is it up in the sky and not down?’ But, of course, it is quite a reasonable one for someone almost completely unschooled.

Using a tomato as the Earth and the campfire as the sun I demonstrate planetary motions, the albedo, and why the length of Sumatra’s days and nights are almost the same.

The conversation spirals out into the vastness of the Universe, until all our minds are twisting like wrung towels and our planet feels tiny and precarious. The fragile tomato Earth has grown warm in my hands. I eat it, guiltily aware of the symbolism. 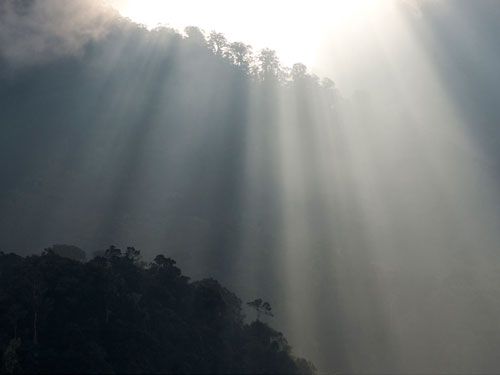 A beautiful dawn. As predicted, the moon is vanishing behind camp and the sun is rising to take its place. Mist tumbles across the lake surface.

We have walked only a few hundred metres from camp before we find fresh tiger tracks in a dried puddle, lobed like black orchid blossoms.

I am excited to see these; the presence of a top predator indicates a functioning ecosystem and gives the forest the added static of danger.

Is it a resident animal, or just passing through? Over the coming months we hope to learn this, and many more things about this landscape.

Further along the trail we find smaller pugs. The narrow plantar and rounded toes suggest it could be a clouded leopard. Further still there are even smaller cat prints. The long plantar and spaced toes show these are the tracks of an Asian golden cat. 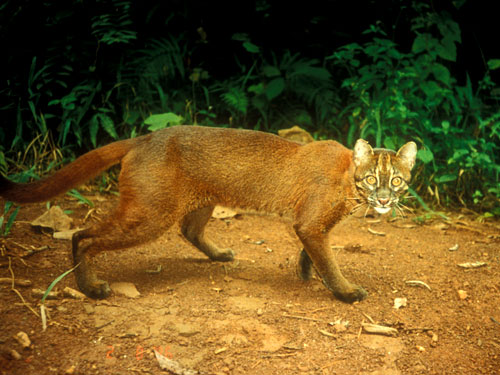 There are signs of terrestrial birds, too. We glimpse a Salvadori’s pheasant and hear red-billed partridge. Both species are endemic to these mountains, and both were once hunted almost to the point of extirpation.

Now there are fewer fishermen and hunters living on the lake and setting traps, the birds are returning – a consequence not so much of protection or education, but of changing lifestyles.

It is a hard life for the fishermen living up here, and the younger generation wants something better. The move towards a perceived ‘better’ life in the cities by rural youngsters is one way that tropical rainforest might survive the inevitable onslaught of over population. 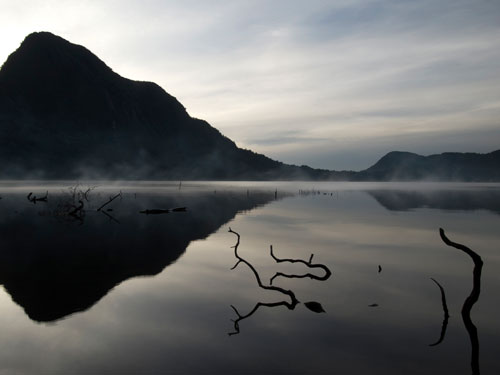 Deeper into the forest we disturb a Malay tapir from its daytime resting place. A strange folksy animal, the tapir is half black, half white, with long mobile hooves and an almost prehensile snout. Despite being the size of a small cow, it slips away silently before we arrive, leaving a scattering of short white hairs and a half eaten giant fig, whose white spongy flesh has yet to oxidize.

On a ridge above the lake we come across a tapir latrine. Four separate piles of plum-sized pellets. There was a tapir resting nearby, too, which made a mad and probably comical dash down the vertiginous slope.

Later we disturbed another sleeping tapir and I wondered if it was the same animal all three times, now feeling increasingly hounded and paranoid. They are obviously light sleepers; although the signs were fresh, we never heard any of the animals escaping. It pays for them to be alert. With tigers on the prowl a lazy tapir wouldn’t last long.

Although tigers are rarely credited with hunting tapir, on Lake Gunung Tujuh this might not be the case. In the absence of a large prey base of sambar, muntjac, or the heavily hunted serow, tigers might have no option but to hunt tapir. We found some evidence that suggests this could be the case: two locations with a scattering of tapir bones. 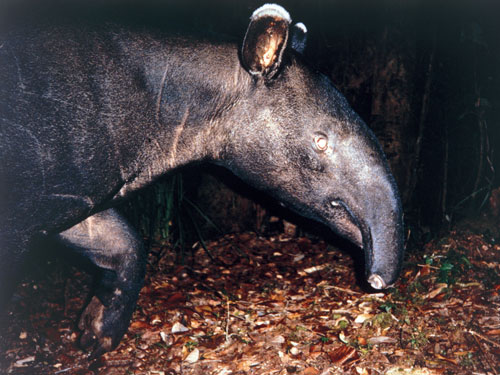 It is very rare to find animal bones in the rainforest for a number of reasons.

Chief among these is that animals tend to retreat into dense cover when they are about to die. Both of the remains we found were close to paths, meaning the animals were more likely killed.

As there were no signs of traps, nor were these locations where hunters would set traps, predation by tigers remains a strong possibility.

We check the camera traps for the first time this morning. As hoped for, we have some good footage of tapirs moving in pairs. Long believed to be solitary animals, Fauna & Flora International’s camera trapping work in Kerinci has shown tapirs often move in pairs. 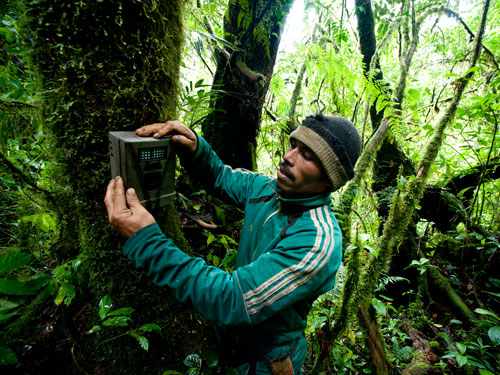 By the end of the day we have three sequences showing these odd, engaging animals wandering the forests together.

One clip shows a pair making a rare daylight outing. I notice the date – naturally it was recorded on Valentine’s Day!