The phone alarm’s first bleep is always unwelcome. Rainforest camps engender a shallow, dream-filled sleep that I am reluctant to exchange for the pre-dawn chill. But it is important to wake early and assess the photographic potential of the weather.

This morning has brought fog and no wind – perfect conditions to record the damselflies on the lake margin. I guess these are from the genus Ischnura, but I have no idea what species – probably a common one, but it is always useful to check with the experts. Who knows, it could be interesting…

Even a slight breeze can cause problems when photographing insects. The still conditions and the fog mean the damsels will be encumbered with condensation and unable to fly until the sun dries. I record two, maybe three, species before breakfast. 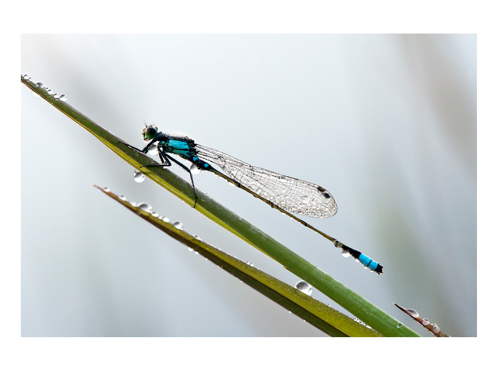 The forest is still dripping wet when we leave camp. Pushing through the undergrowth we are soon soaked; getting snagged on a branch or barbed tendril of rattan sends down a cold shower of sparkling water droplets on our heads.

While we are on the mountain I want to check on a Critically Endangered plant, the carnivorous pitcher Nepenthes aristolochioides. It is known from only on a few ridges around the Gunung Tujuh crater lake in Sumatra, which means that today we have a strenuous hike. Theft of wild plants by zealous collectors – coupled with the desiccating effect of the 1997 El Niño event – sent the few existing populations into decline, and it was feared that this species might disappear entirely from the wild. 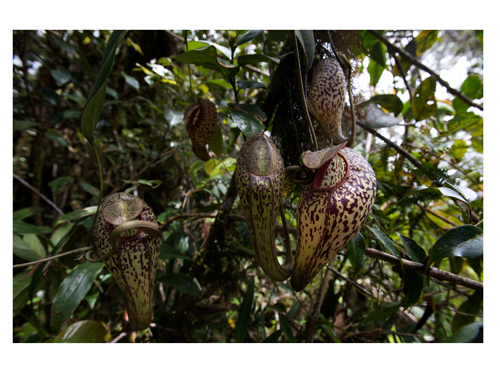 Nepenthes aristolochioides thriving once again in its only known habitiat. Credit: Jeremy Holden/FFI.

Nepenthes aristolochioides is fastidious about where it grows, preferring the high moss forest ridges formed by the remains of the volcanic cone. It is a struggle up the steep slopes, but the forest here is relatively benign with few thorns and almost no leeches.

The moss, or cloud, forest is one of the most beautiful environments on earth, but it is also a fragile one – climate change is already threatening the integrity of high altitude forests across the planet.

Although the trees in these forests may not be affected by small changes in air temperature, it is a different story for the epiphytic vegetation – plants that anchor themselves onto the bark or branches of the trees – that so characterises these habitats.

Some 10% of the higher vascular plants are epiphytic, and they rely on atmospheric mist to get water. Without this they gradually wither and die, as happened during the El Niño. Nepenthes aristolochioides can also be epiphytic – the ones that were didn’t survive the drought of 1997. 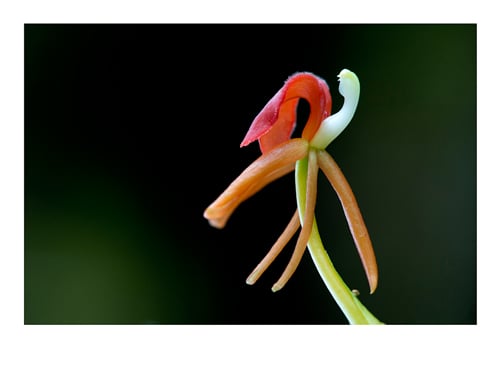 We visit all the known colonies of aristolochioides along the ridge and find they are thriving; some vines bear robust-looking pitchers larger than I have previously seen. There are fewer vines than before, and this can still be considered an extremely rare plant, but for the moment it is making a comeback. 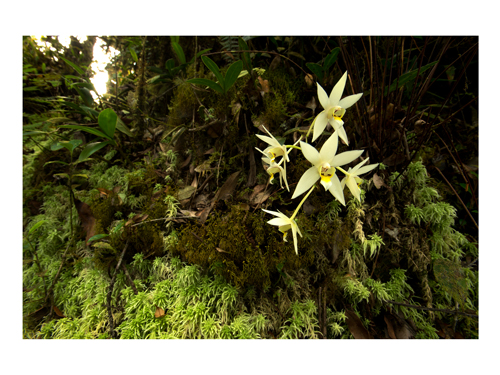 The epiphytic orchids are returning, too. There are six or seven species in flower, including the beautiful Epigenuim cymbidioides and the strange stylised flowers of Liparis. The last time I was on this ridge it was dry and devastated, so there is something very satisfying in seeing that balance has returned… and with it these wonderful, fragile plants.

If you missed part one of Jeremy’s Rainforest Diary, you can read it here.