Putting Príncipe back on the map with 3D technology

Back in May, An Bollen and I reported on our first impressions on arriving on Príncipe Island – a tiny volcanic island in the Gulf of Guinea that is impressively rich in biodiversity.

Located off the west coast of Africa, Príncipe is part of the archipelago of São Tomé & Príncipe. This chain of islands is comparable to the Galapagos in terms of endemic species (those found nowhere else on earth) and biodiversity.

Though only 56 square miles in area, Príncipe not only boasts two Important Bird Areas and one Endemic Bird Area, but is also a UNESCO Man and Biosphere Reserve.

Who, or what, is out there?

But despite its high conservation importance, Príncipe Island’s vegetation is not that well understood. The few available maps are outdated and inaccurate – in fact the majority were created back in colonial times and focus on agricultural development. Since that time, there has been much change in land use, and natural forest has regrown over much of the abandoned agricultural land.

As a result, there are currently no maps that accurately portray the current forest vegetation or identify the different terrestrial habitats.

But all that is changing now…

As part of my work here, I have been working with the Príncipe Trust Foundation and various government agencies to start mapping the island’s forests.

Our first challenge was to work out how to do the surveys. Most of Príncipe’s best preserved forest areas are in the south of the island which is difficult to access and features rough terrain that makes traditional vegetation surveys extremely challenging. 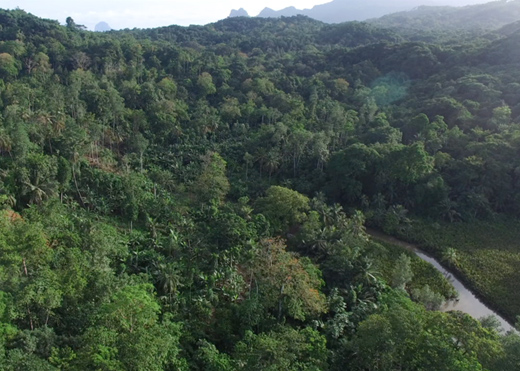 However, technology has come to the rescue in the form of drones which allow us to rapidly assess the forest – no matter what the terrain. These drones can capture images and videos at such high resolution that we are not only able to identify key forest features but can even start to identify some key and invasive species.

Perhaps best of all, these images can also be used to create digital terrain models – or 3D maps, if you prefer!

Drones are not without their challenges, however.

To begin with, you need to find suitable ‘launch pads’ in the forest where the drone can take off, navigate through the canopy and then land again safely. What’s more, you have to be able to pilot the drone without visual line of sight due to vegetation, and avoid hitting branches or crashing it. 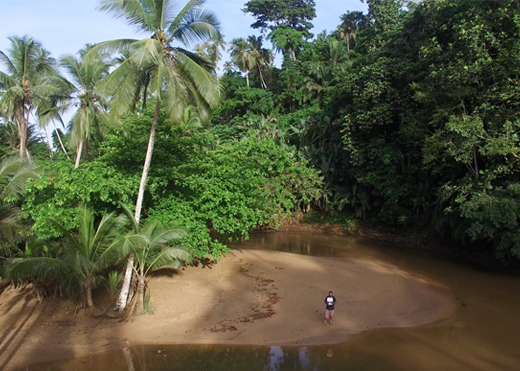 Signal failure due to the dense vegetation (or because the drone has flown out of range of the operator) is also a real issue, and battery life limits time of flights and the size of the area that can be sampled.

To find out whether drones surveys would be feasible on Príncipe, we therefore needed to carry out a trial.

We set up eight test plots – four in the Azeitona Protected Area and four in an agroforestry area. As I piloted the drone up above the canopy, I saw for the first time how vast and dense the forest looks from this unusual point of view. It takes a while for you to get used to navigating and seeing the forest from the drone’s perspective, but once you do it is just incredible to contemplate the forest from the sky.

Once the drone flights were done, I joined the local Forestry Department workers, the Agriculture Direction, park guards and the HBD agriculture team in a more traditional ground survey to map and identify the bigger trees in the areas.

Now, we are comparing the information we gathered from the ground and the air to see whether the drone allows us to accurately identify key species and assess canopy cover, forestry regeneration and so on.

The initial results show that we still have to do much work to mastermind this tool, but it is already incredible to see the amount of information that we can gather from the photos. Some tree species such as the invasive coconut and palm oil are easily spotted in the pictures, and we can even infer the area they occupy. One can also spot and explore other features in detail such as the mangroves, and identify forest cuts that are a sign of illegal logging.

One element of this work that I am particularly excited about is the potential for creating 3D maps using imagery taken with the drones. 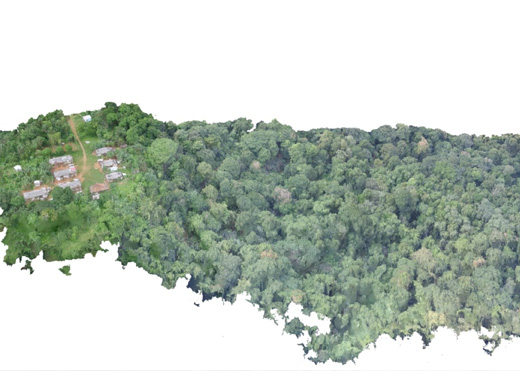 A computer-generated 3D map of the island of Príncipe. Credit: Felipe Spina/FFI.

This ‘new’ type of maps allows you to gather even more information about the forest, particularly the information on the terrain and the height of the trees. Unlike the usual 2D maps produced by drones (which are formed by stitching together a few shots), to generate a 3D map you need to fly over the area of interest many times taking literally hundreds of overlapping pictures at low altitude. You then process the information in a drone mapping programme (I am currently using the Pix4d mapper) which is a quite long and tedious process in order to generate a 3D map.

But the final results are impressive. If all is done correctly you can see the terrain information on your maps, and can see slopes, rivers and other features. It is also possible to measure the forest features in detail, and even infer how high the trees are. Being able to gather such detailed information is amazing – especially in a place that lacks good up-to-date maps.

The information can be used to generate accurate information on Príncipe’s terrain, map areas of special interest (such as mangroves) in detail, monitor and plan forest regeneration work, patrol for environmental crimes to name just a few.

We have concluded from our pilot project that this can be a powerful tool, so now we will work on mastering it and expanding the areas to be mapped. For next year, we are even considering buying a upgraded drone mapping kit so that we can map bigger areas more quickly, and we will focus our work on the most remote areas in the south of the island.

Our pilot project also taught us one other important lesson: that we need to avoid being attacked by black kites! These are the biggest birds in Príncipe’s skies, and for some reason are very curious about (and fearless of) drones.

Pretty much every time I fly, my biggest concern is the kites, which show up for almost every flight I do. Some just seem curious and fly around the drone from a distance, but some come scarily close to check out this stranger to its environment. On one flight, I counted five kites simultaneously following my drone in the sky. Luckily it has never yet been attacked, but I do need to keep an eye out on the kites the whole time and carry out a fast evading manoeuvre if they come too close!